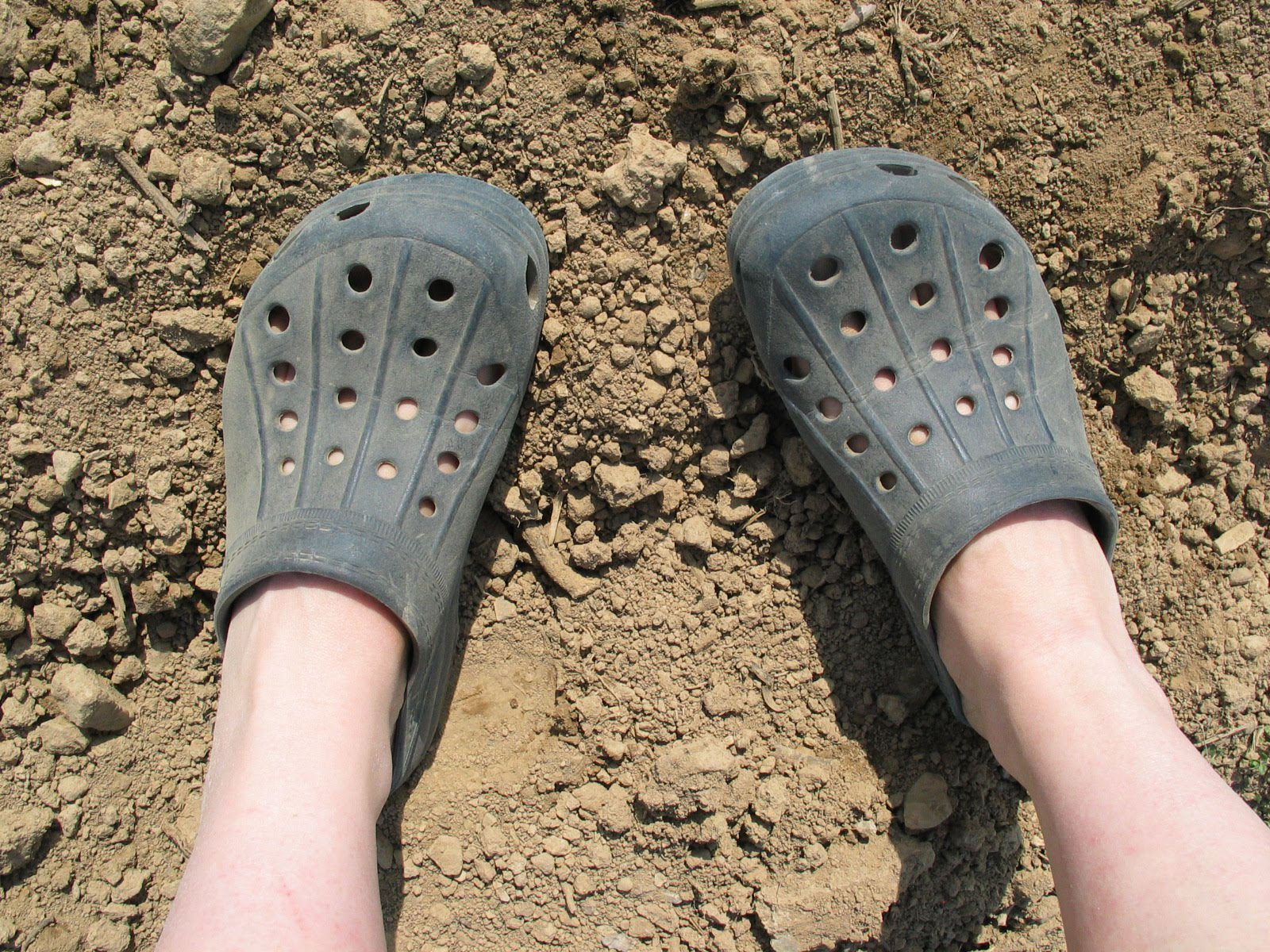 But I’m not going to let that stop me from writing.

Hm, let’s see. What to talk about?

For the next month, I have two-day, free shipping from Amazon. This is dangerous. And scary. And exhilarating. What should I buy? Hmmm? I’m hoping to order all school books for next year. Or maybe for the next ten years. After which we’ll need to reinstate the spending freeze for the next six months to compensate. Moderation is not my strong suit.

Mr. Handsome finally broke his spending fast yesterday. I broke it long ago with lemons and goat cheese, but he was determined to go forever. (Snort-HA!) He bought two bags of day-old bagels. The Baby Nickel was so psyched for “donuts” that he was running laps around the table and bouncing off the walls.

While I was puttsing in the garden last night, I discovered that the baby potato plants are covered with puddles of orange eggs, so I abandoned the radishes to crawl down the row squish-squishing the evil babes with my fingers.

The feet of the Potato Bug Smoosher. Be very afraid, ye yucky bugs.

And now for some kiddisms.

1. Miss Beccaboo likes to pretend she has claws. 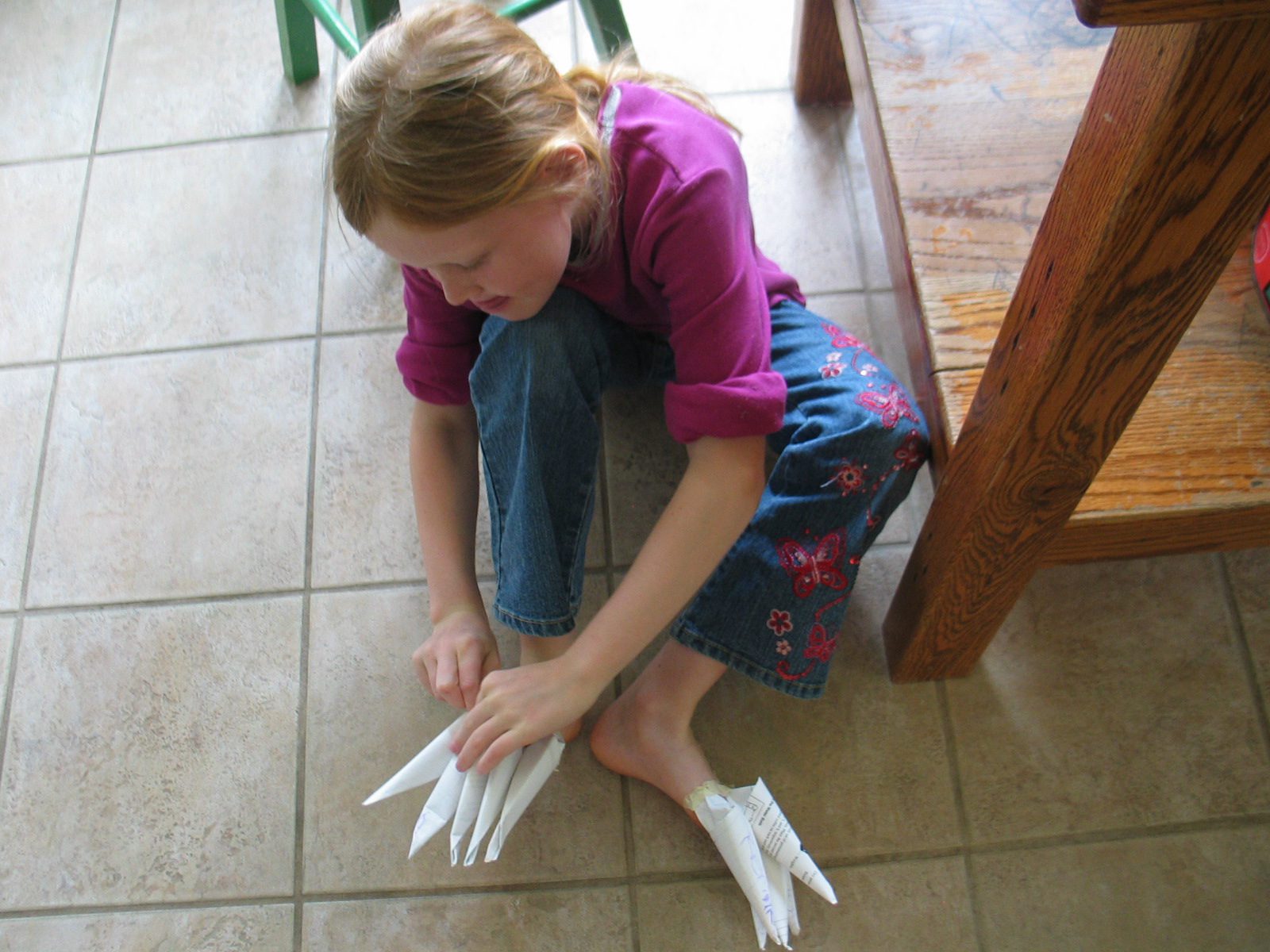 She tapes these finger thingies to her toes and hobbles around. 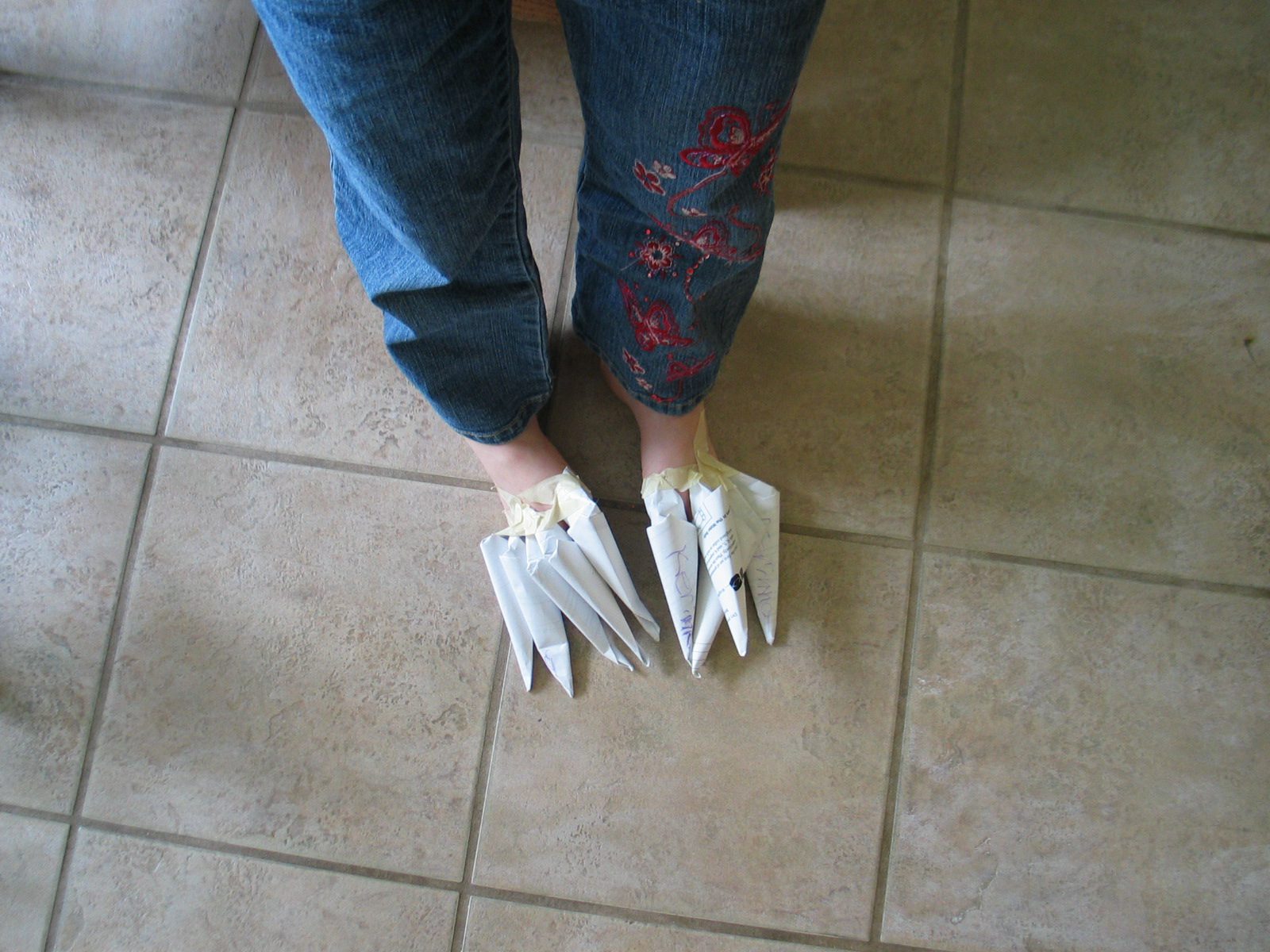 She has to take them off when she does dishes because she doesn’t want them to get wet.

And I thought those fake fingernails must be a pain….

2. She also twists her arms together in a backwards pretzel shape, fingers intertwined, and then states dryly, “I’m letting my brains talk for a little while.” Apparently a friend told her that when you cross your arms like so, the left and right sides of the brain can converse. Maybe she’s deficient in brain equilibrium?

3. Which reminds me. The other day she said, “I used to be a good thinker, but I’m not anymore.” I’m not sure why she said that, and it actually sounds kind of pathetic now that I’ve written it. She probably just did a number of dumb things in quick succession. Getting in trouble repeatedly will make you feel like a not-so good thinker. That’s how I feel when I flop cakes and talk without thinking.

Or blog without thinking.

4. One day, out of the blue, The Baby Nickel said, “Mom, your hands are different.” I asked, “How do you know?” and he replied, “I smelled them. They smell like a new mom.”

I don’t know what that means.

5. Yo-Yo asked me, “What are statistics?” I tried to explain and failed, plus I kept mutilating the pronunciation, so I finally resorted to a round-about answer, “It’s what your uncle is studying in school.”

About one year ago: Baked Macaroni and Cheese