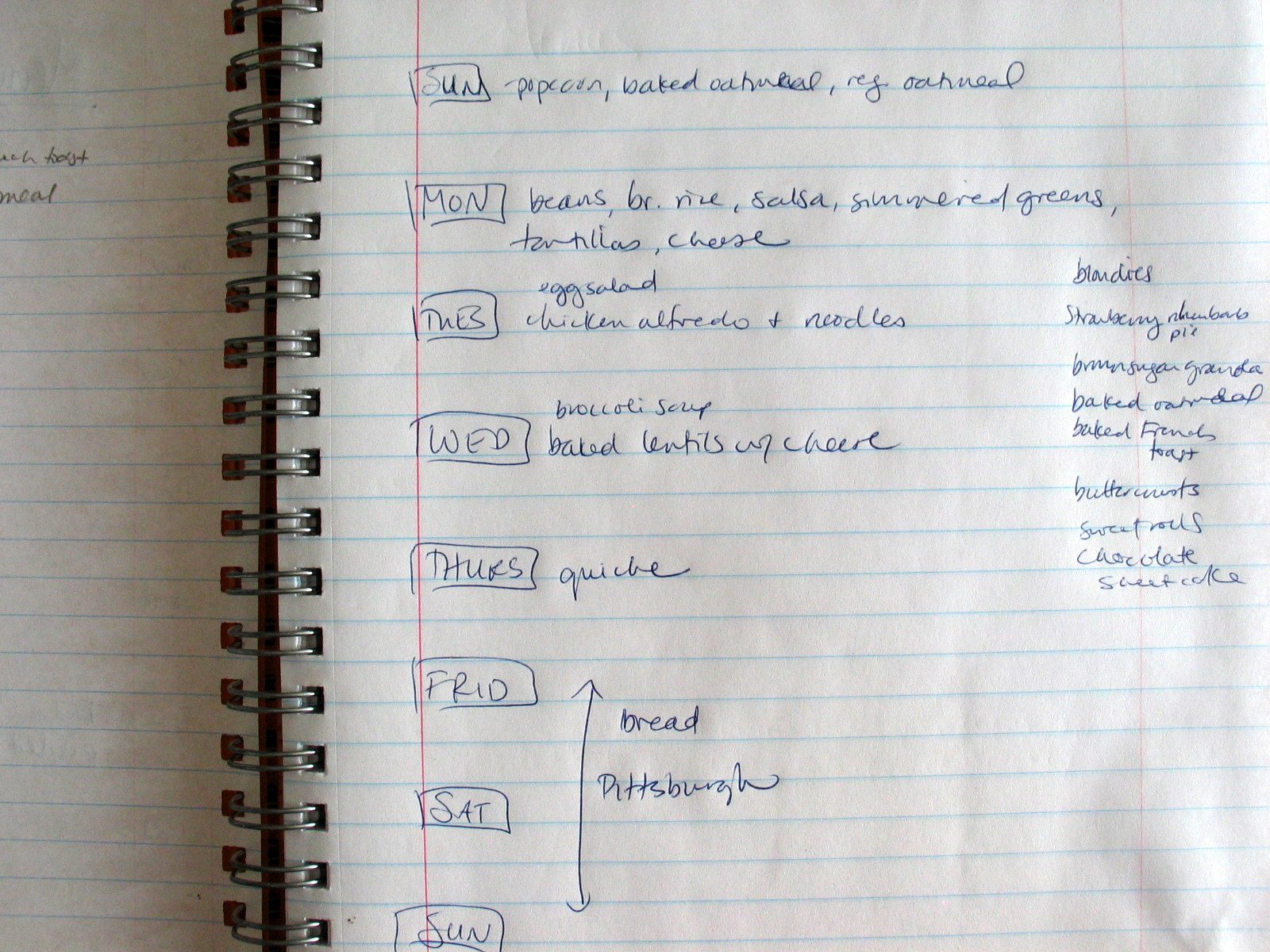 Menu planning is all the rage, it appears. It may have been the rage for many years, but somehow I missed it.

Or rather, I intentionally side-stepped it. When I caught on that responsible cooks were supposed to do menu planning, I rolled my eyes and sucked in my breath. How boring! Menu planning was too limiting for a creative cook like me! I mean, where was the room for improvisation and inspiration? For leftovers? For falling in love with a new dish and eating it for supper (and lunch and breakfast) three days in a row? Nope, sorry, huh-uh. There was no way I could ever settle down enough to follow a menu.

That didn’t mean I was opposed to making food-centric lists. (“Food lists” differ from “menus” in that there is no time-frame attached, see?) When we got our first foster child, two months after acquiring The Baby Nickel, a bread baby, and two blood transfusions (it was a busy couple months), I panicked (and continued to panic for the next ten months until that particular foster daughter left our home). How would I ever be able to turn out two full meals a day, plus have enough snacks on hand to feed my exploding household? So I sat down at the computer and whipped out some menu ideas. I listed off dishes that centered around beef, beans, chicken, pasta, and pork. I jotted down a variety of lunches, breakfasts, healthy snacks and quick desserts. Then I stuck the list to the fridge with a giant cow magnet and went on about my life. The menu list still flutters from its spot on the freezer door, though now it’s all crinkly-edged and scuffy. I peek at it only once in a blue moon, or maybe every other blue moon, but it served its purpose back in the day, relieving my overloaded psyche. For that I am grateful.

(A note about the cow magnet. Do you know what cow magnets are? They are giant rectangular magnets—several inches long and heavy, heavy—that farmers feed to their cows [ours came from Mr. Handsome’s father whose job was to drive a truck around to farmers and sell them things…like cow magnets] after they’ve gotten into a junk pile and accidentally eaten copious quantities of nails. The magnet is like a nail-oriented pied piper—as it shlups through the intestines it summons all wayward metal objects until they are finally joined together like a pointy, over-sized amoeba. The metal amoeba is then ejected out of the cow [OUCH!] in the form of a steamy, hot, extra-heavy patty in a field of daisies somewhere. I don’t think the magnets get recycled, but I could be wrong. As far as I know, ours were brand new.)

You’ve probably already figured out where this post is going: I now make weekly dinner menus.

Yes, it’s a veritable “eat crow” fest around here. It always happens to me when I have an opinion about something. Opinions are dangerous, mark my words, and the pied piper of crows, if you get my drift.

I don’t make menus all the time, maybe once every other week, but I find that when I sit down for a little planning, my week goes smoother, we eat a more balance diet, I plow through more of our food supply, and the kids fuss and whine less. Go figure.

I also (and this is where the chunks of crow get particularly hard to swallow) seem to be more flamboyant in the realm of creative cooking. Instead of my standard all-or-nothing technique (lots of new recipes or none at all), I start by making two lists—one of basic crowd-pleasers (spaghetti, beans and rice, pizza, potato soup) and another of all the new and exciting food I want to make. Then I go about sprinkling in the new amongst the old. This way we’re less likely to end up with a meal of spinach soup, Asian sweet potatoes, crackers and peanut butter, a funky butternut squash salad, and whiskey-soaked raisin Irish bread … and a passel of still-hungry kids.

This kind of makes me sound organized. I’m not. I don’t always even get around to making a menu. Like this week—I’m making stuff up as I go along. We’re eating just fine, but the task of feeding everyone weighs on me extra heavy—each meal is a hurdle that needs to be overcome. With that heavy feeling, it’s hard to find the space to be inspired or to pull together more than a quick meal. 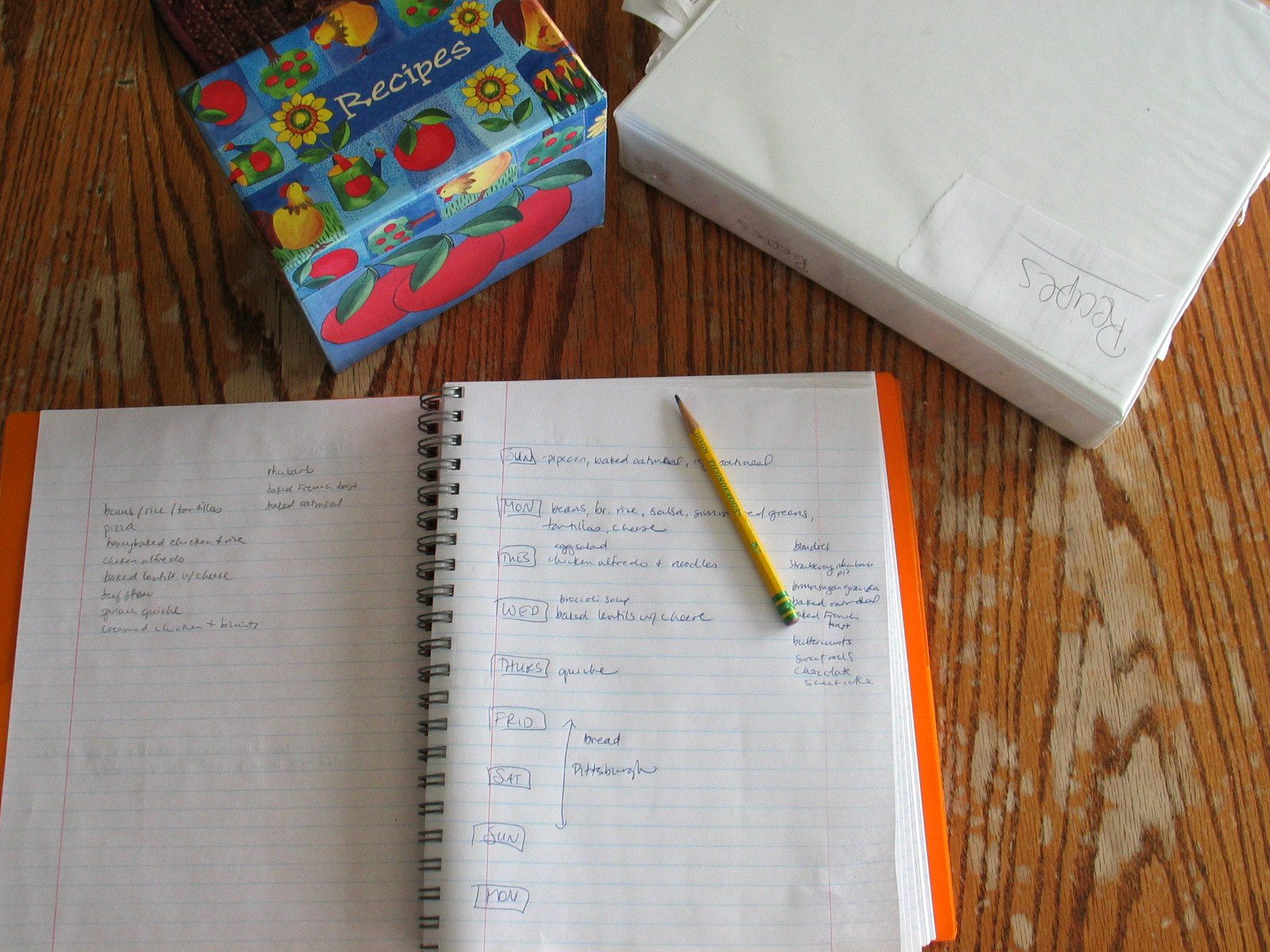 My cooking inspiration comes from a variety of sources (blogs, magazines, cookbooks) and all the hundreds of ideas ping around in my head, cluttering my mind and weighing me down. Therefore, in an attempt to free up my brain space, I recently attempted to reorganize the chaotic state of my recipe files. Sort of.

Up till now, I’ve been operating with the following: 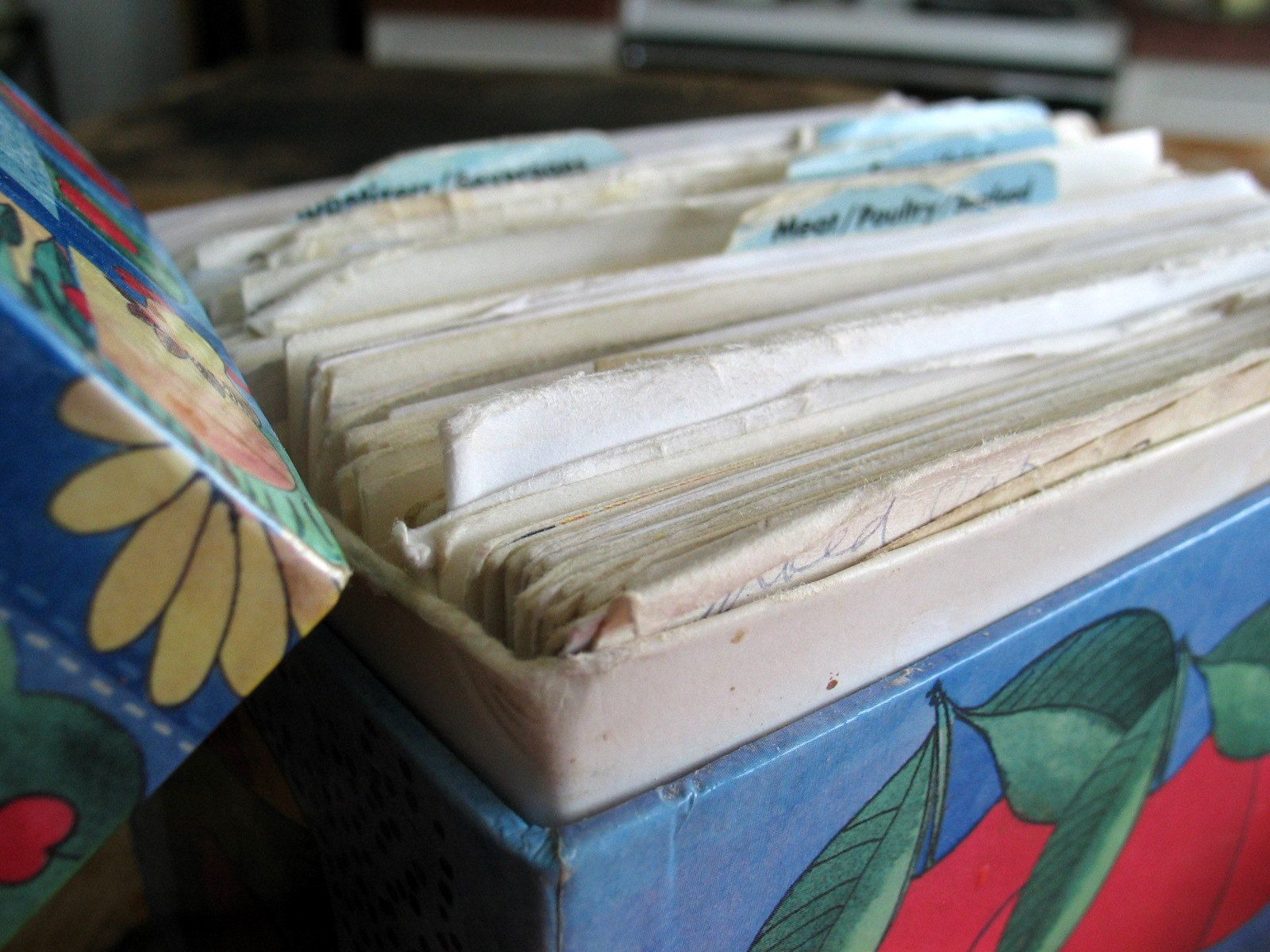 *A traditional recipe box, significantly unorganized. It’s broken down into breads, desserts, main dishes, veggies, and odds and ends. Nothing is alphabetized. Only I can find recipes in there, and even then it’s hit or miss. 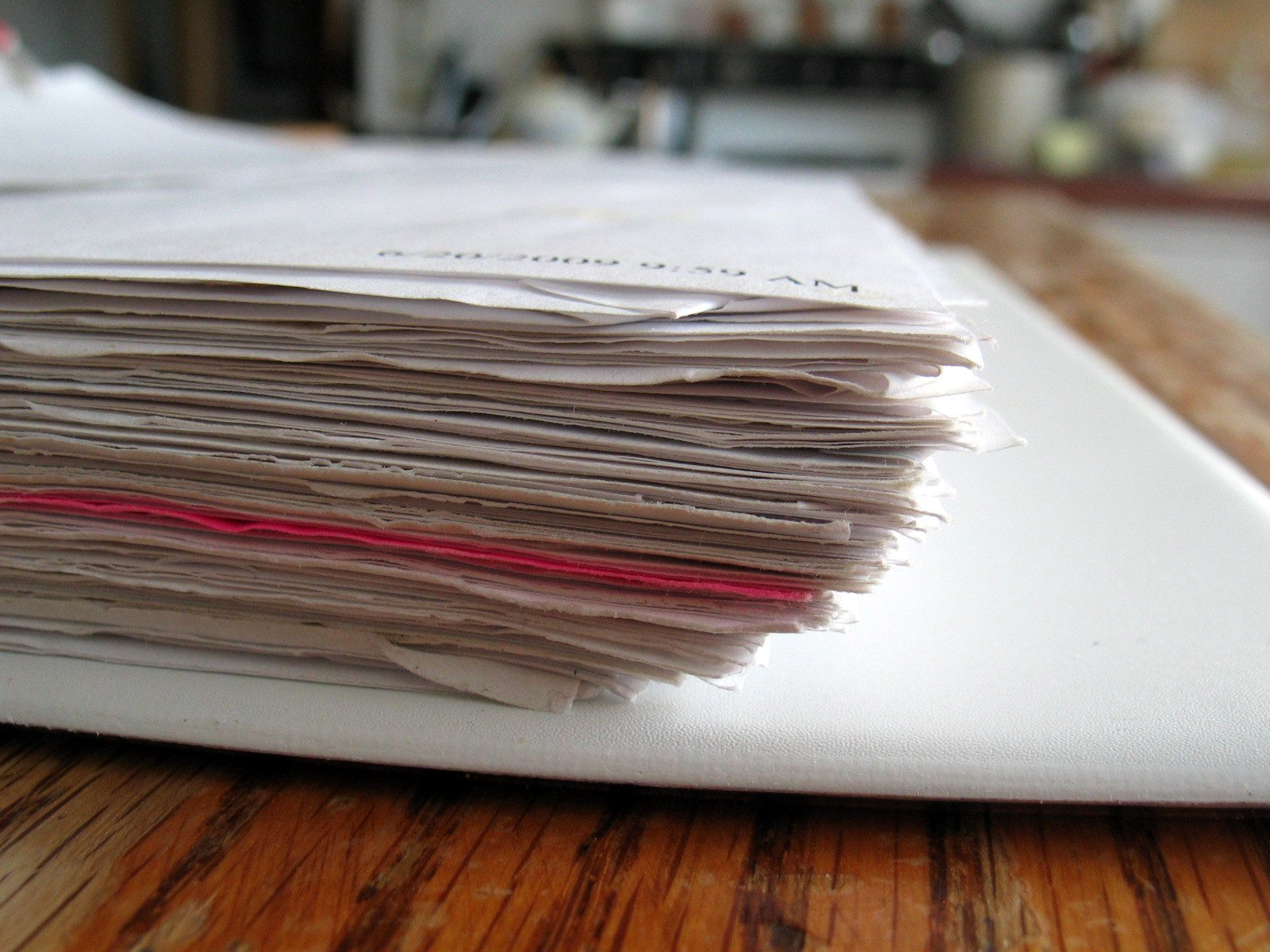 *A three-ring binder filled with photocopied recipes, newspaper clippings, and bits of paper with hastily scrawled recipes, often without even a title to identify them by. 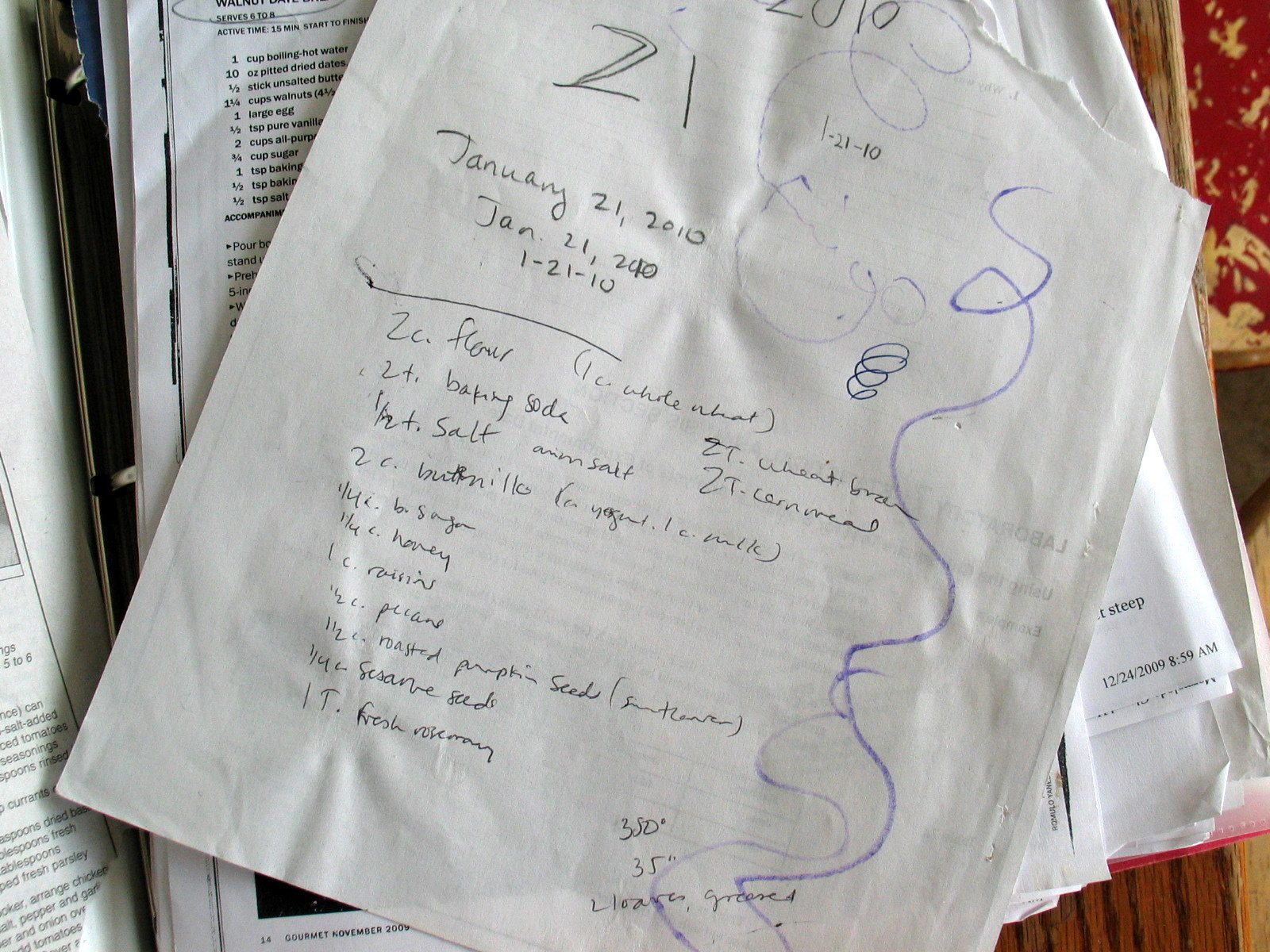 Somehow I’m supposed to know that flour, pecans, buttermilk, onion salt, and cornmeal equals crackers. The funny thing is, I can almost always figure out my notes. Nobody else could, though, that’s for sure. 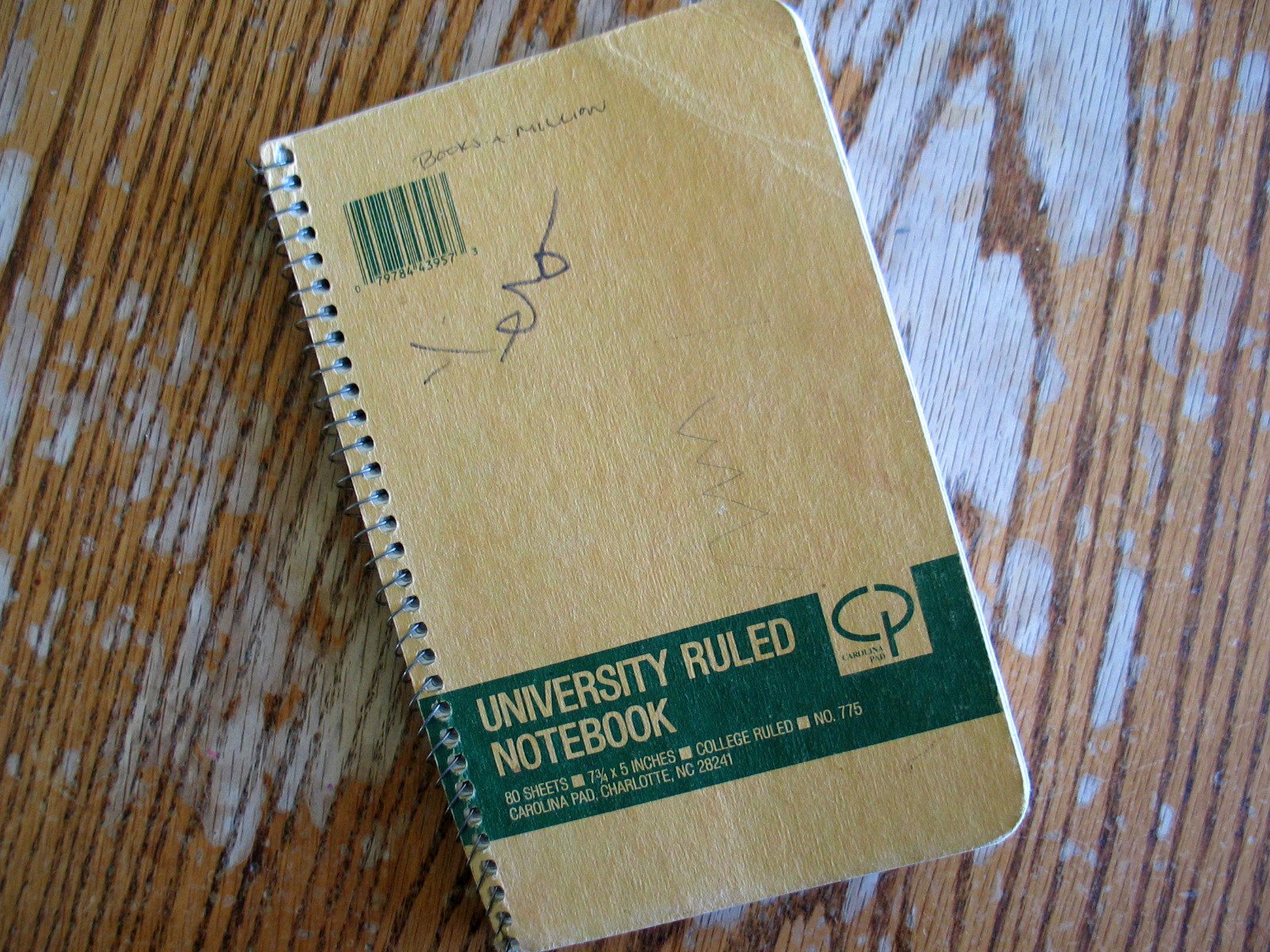 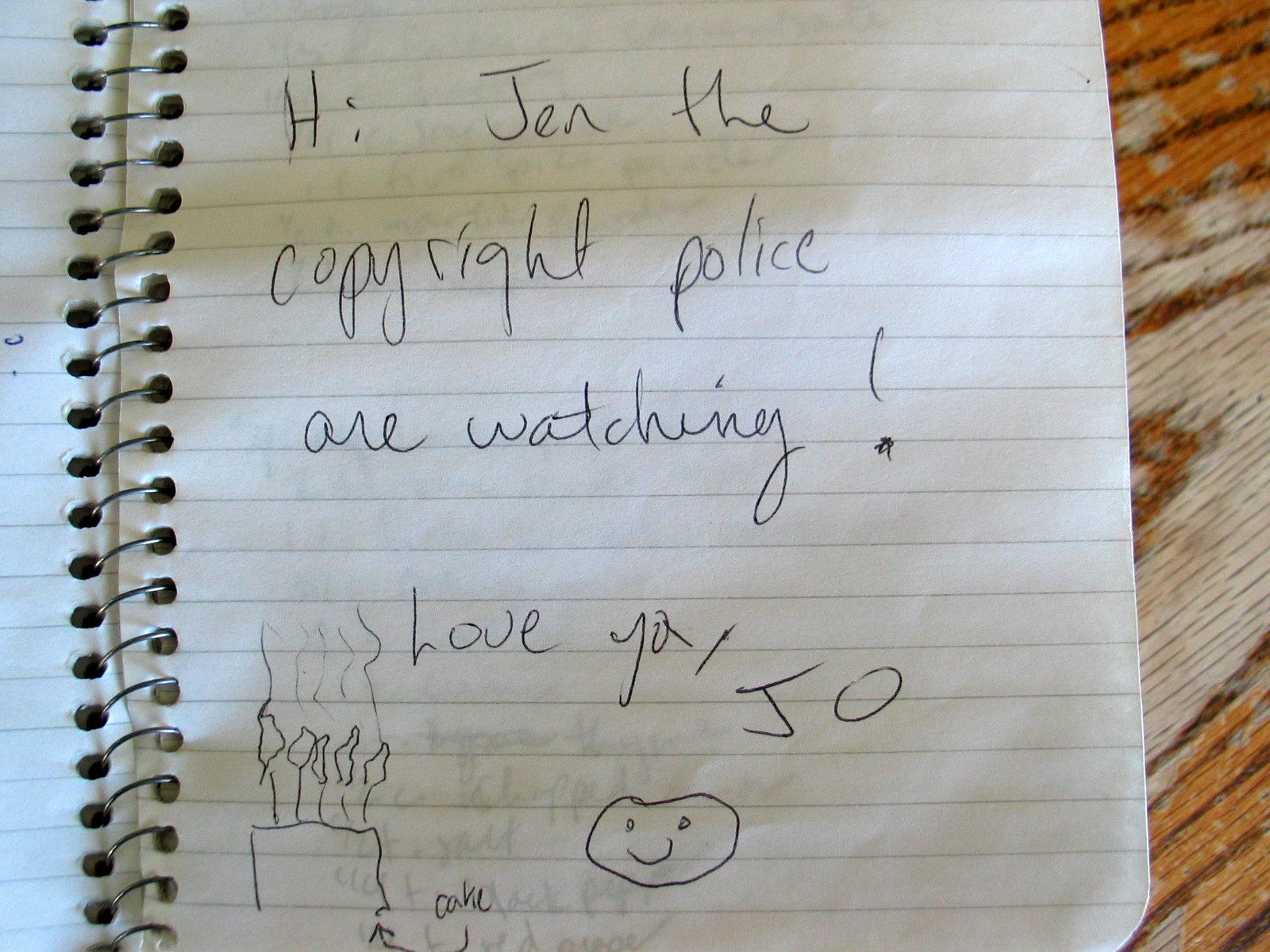 A number of years ago, before my internet awakening, I developed the habit of frequenting Books-A-Million (first) and Barnes and Noble (later) for my get-away breaks. I would carry this little notebook with me and research recipes, jotting them down in the notebook whenever I found one that appealed to me. Towards the end of the book, I started jotting down some recipes from the internet. 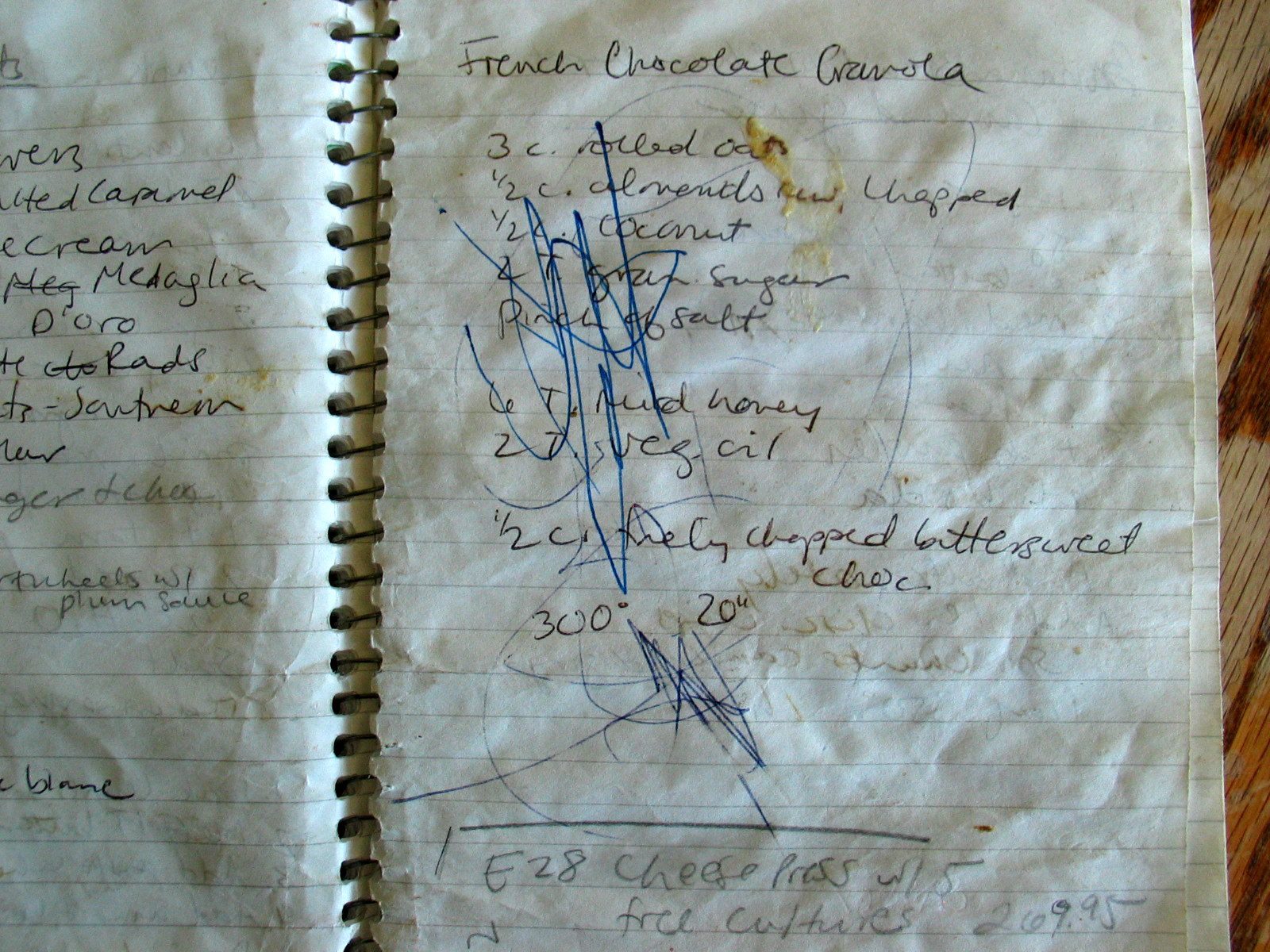 Here is the one for French Chocolate Granola, a classic if there ever was one. Our adoration (not an exaggeration in the least—make it once and you will be a follower for life) is plain as day, no?

*Another folder with a large selection of copied and clipped recipes.

*And of course there is the blog recipe index, something I refer to with increasing frequency. 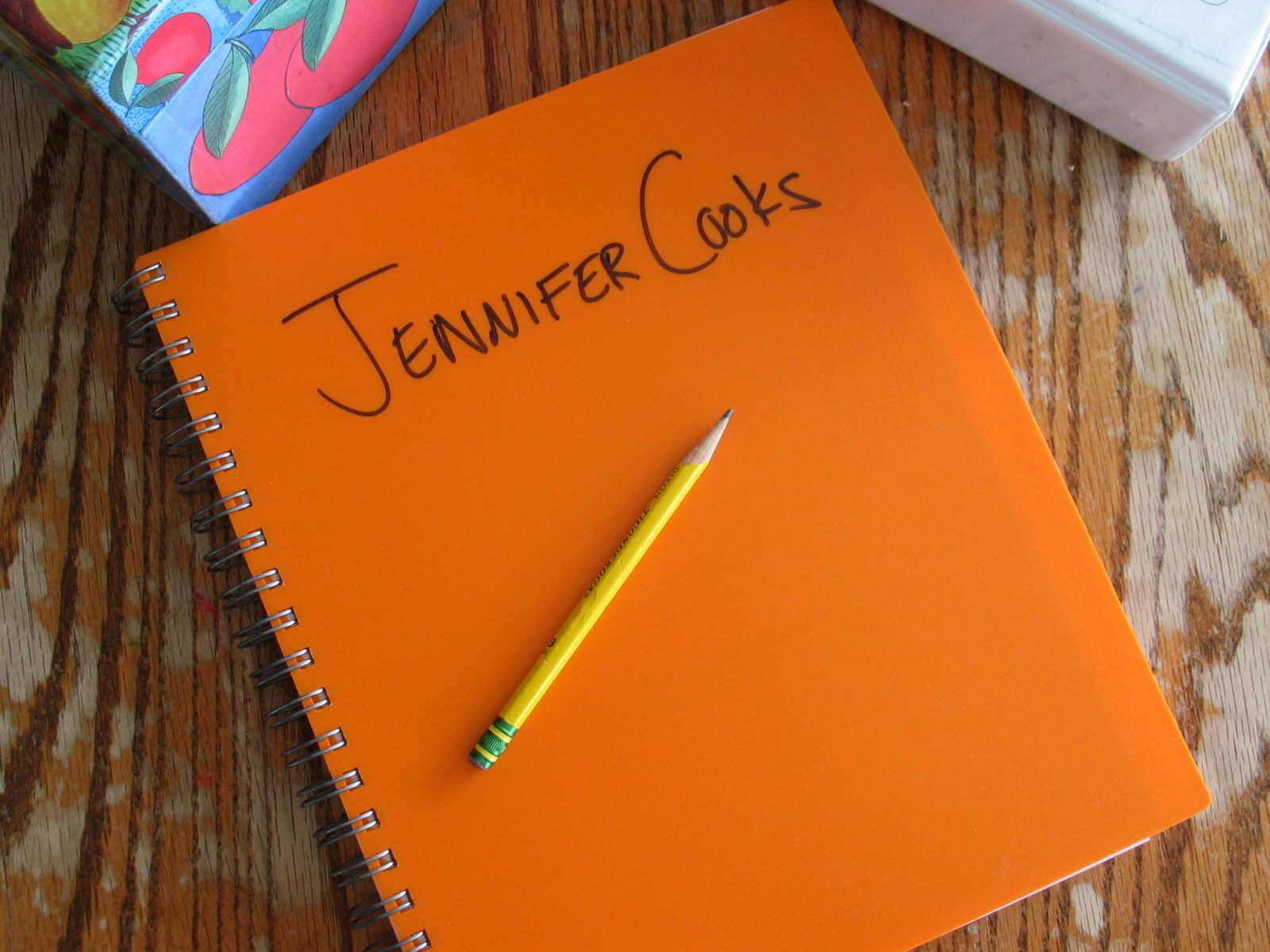 I recently set about remedying this recipe overload problem with a new notebook. Oh goodie! One more thing to add to the confusion! This notebook doesn’t clean up any of the current chaos, it’s just my new focal point in the hopes that future chaos will be minimized. The large notebook is divided into three sections with two orange dividers. 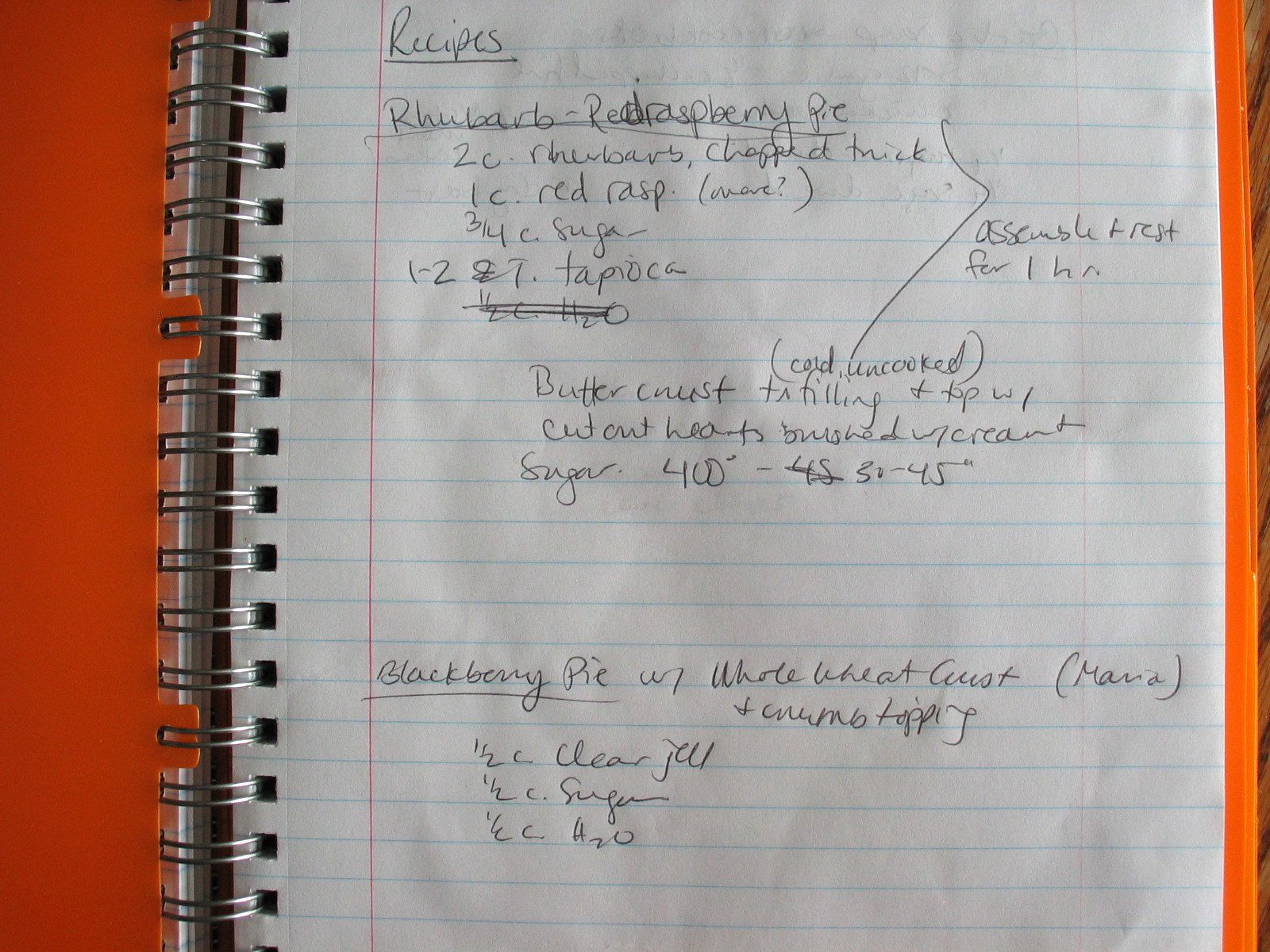 The first section I use for menu planning, the second section is for recipe ideas and notes, and the third section is a record of meals I’ve served for company.

Switching gears: Saturday’s supper came around faster than I anticipated, and because I was menu-less, I was at a total loss. 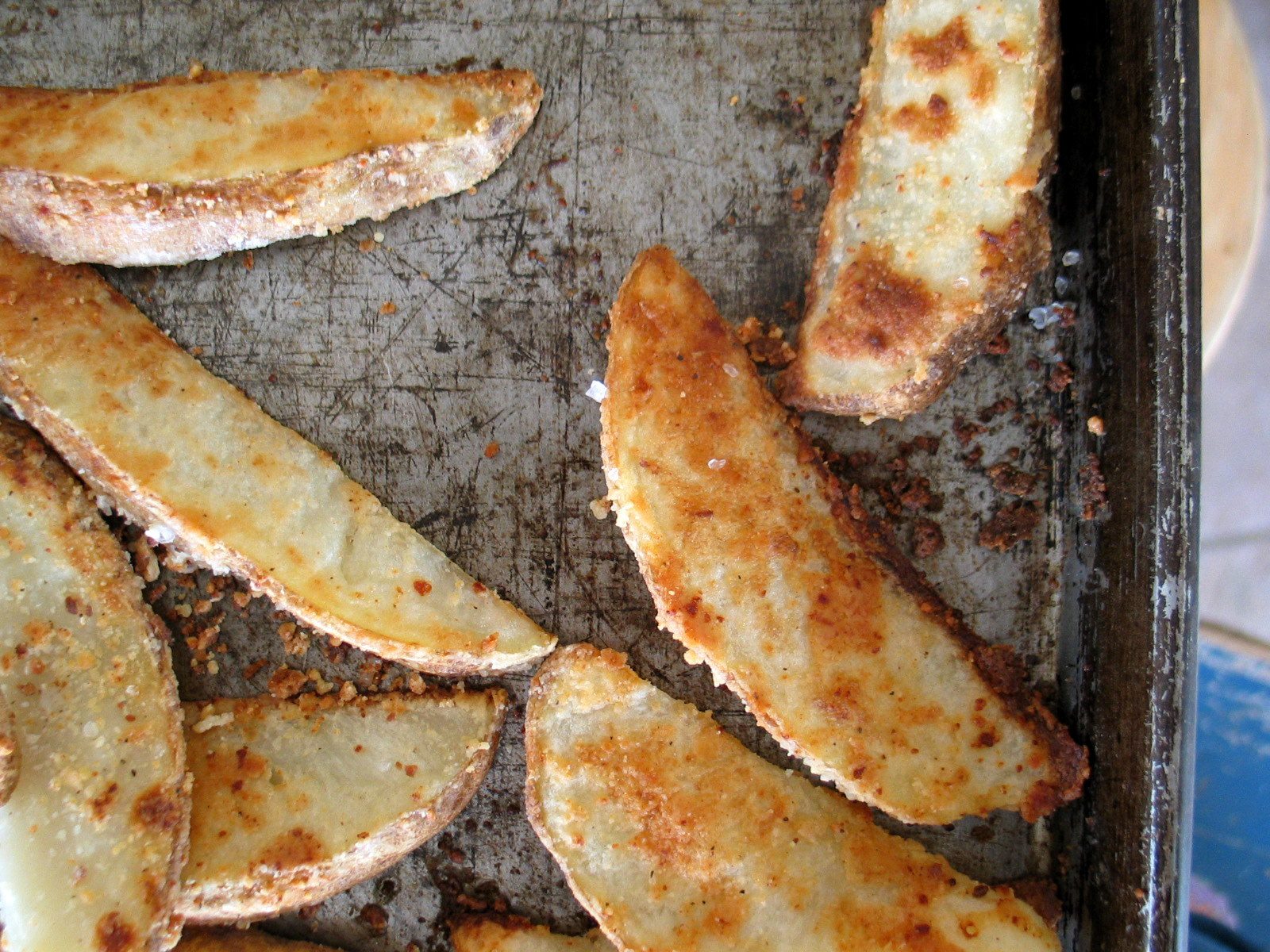 After gazing into the bowels of the fridge and staring vacantly at my pantry shelves, I settled on oven fried potatoes … and a quart of corn. I only made a single batch of the fries, definitely not enough for my oven fry freakazoids, so we filled up on popcorn later. 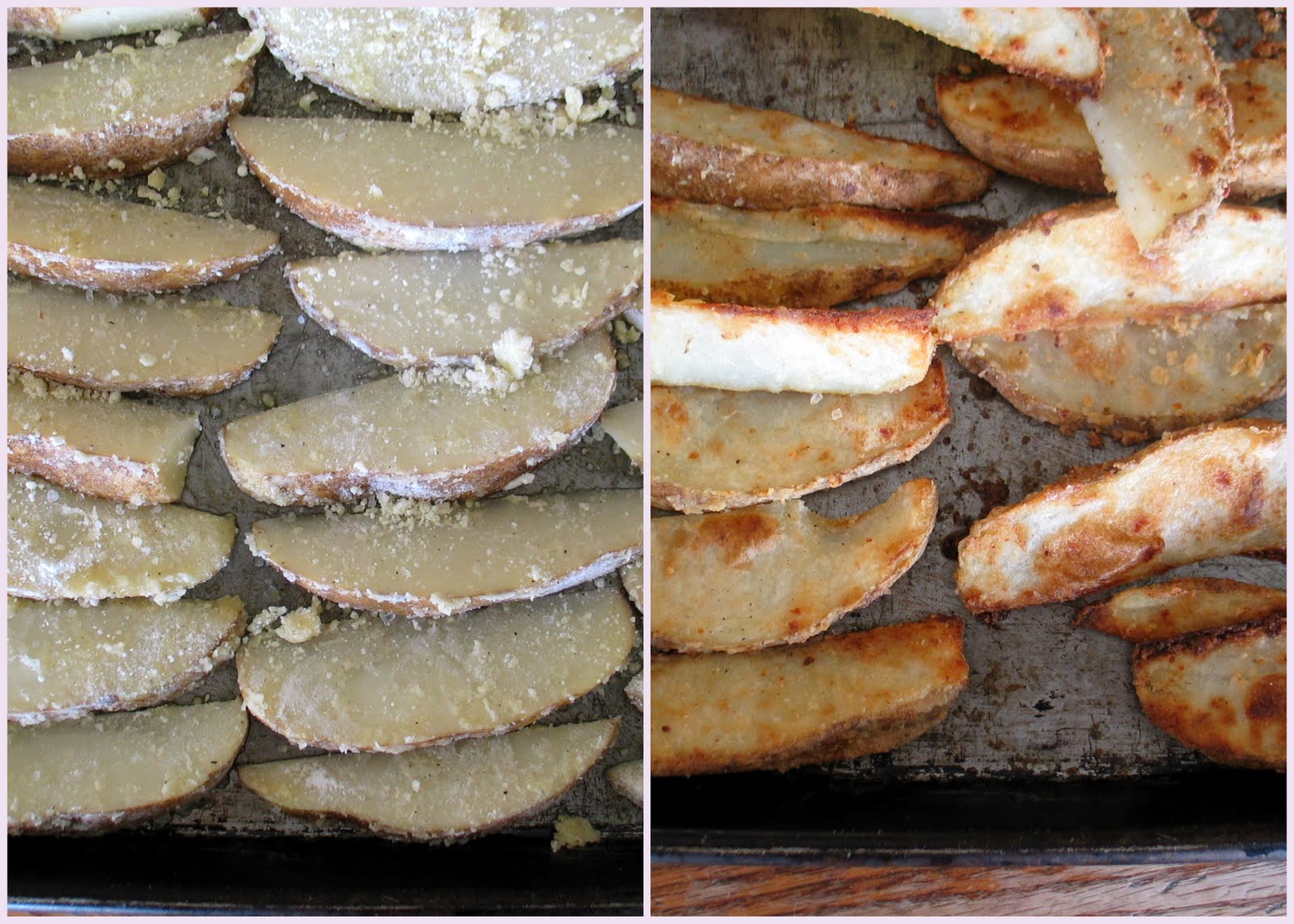 In the spirit of slap-dash recipe filing, haphazard menu-making practices, and quick meals, give these oven fries a whirl, okay? You follow a menu? Scribble them in! You don’t know what to make for supper tonight? Make these! …and then draft a recipe for next week with these potatoes on it. I guarantee they’ll taste a lot better than crow. 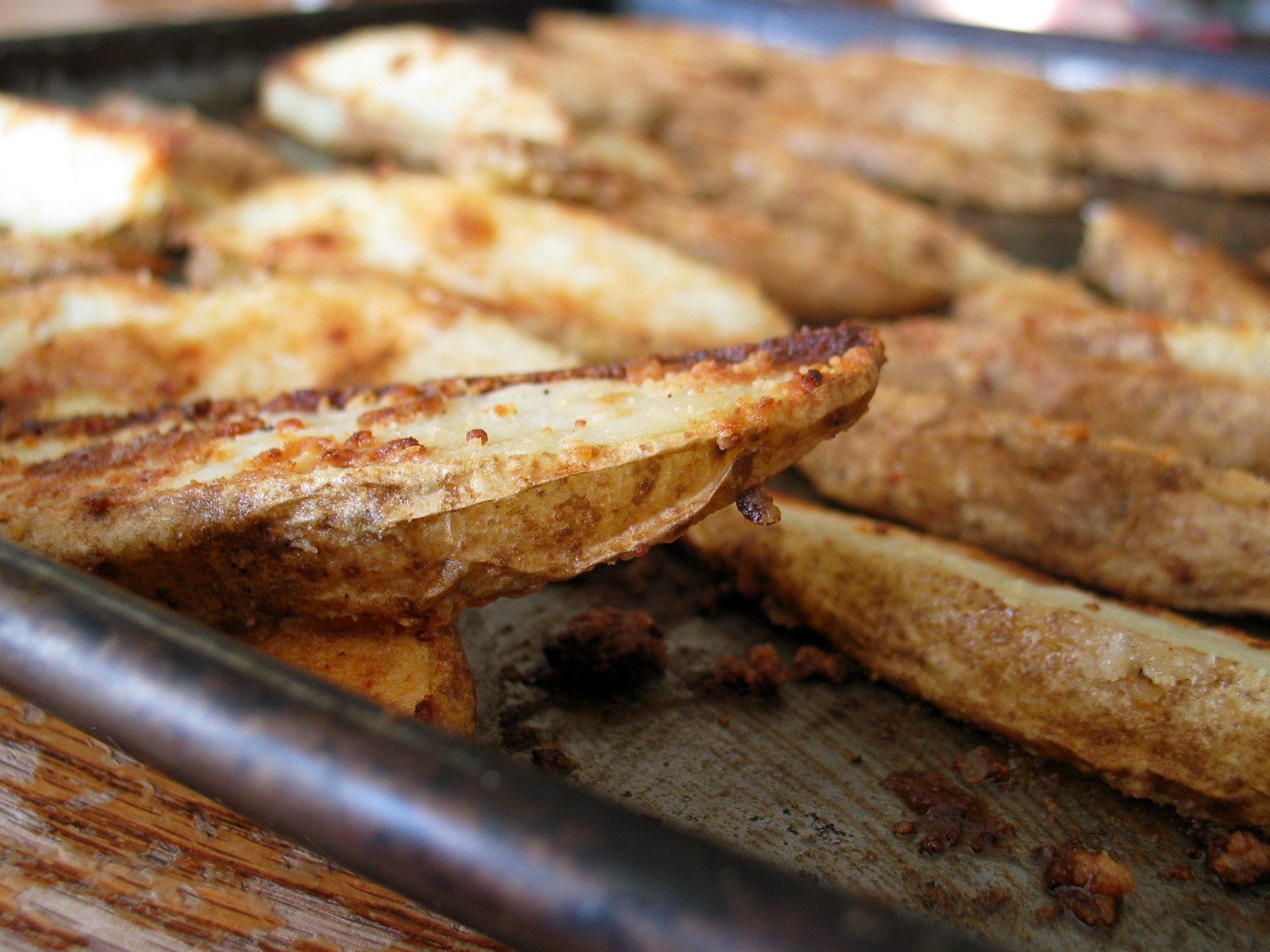 One recipe makes enough for a side dish for our family; if it’s to be the main course, double it.

Wash the potatoes (no need to peel) and cut into uniform wedges. Drizzle them with some olive oil (maybe a quarter cup?) and toss to coat.

In a separate bowl, combine the flour, cheese, and seasonings. Sprinkle over the potatoes and toss to coat.

Brush a couple rimmed cookie sheets with more olive oil. Arrange the potato wedges, cut side down, in rows. Do not overlap them. Do you think you’ll need more salt? If so, add it now.

Bake the fries at 400 degrees, on the bottom oven rack. When their undersides are nicely browned (after 10-20 minutes, depending on your oven), remove the pan from the oven and flip the potatoes. Return the pan to the oven and bake till the other side is golden brown (another 10-20 minutes).

Serve with ketchup. Leftovers (lucky you!) are delicious with scrambled eggs.

About one year ago: My excuse.