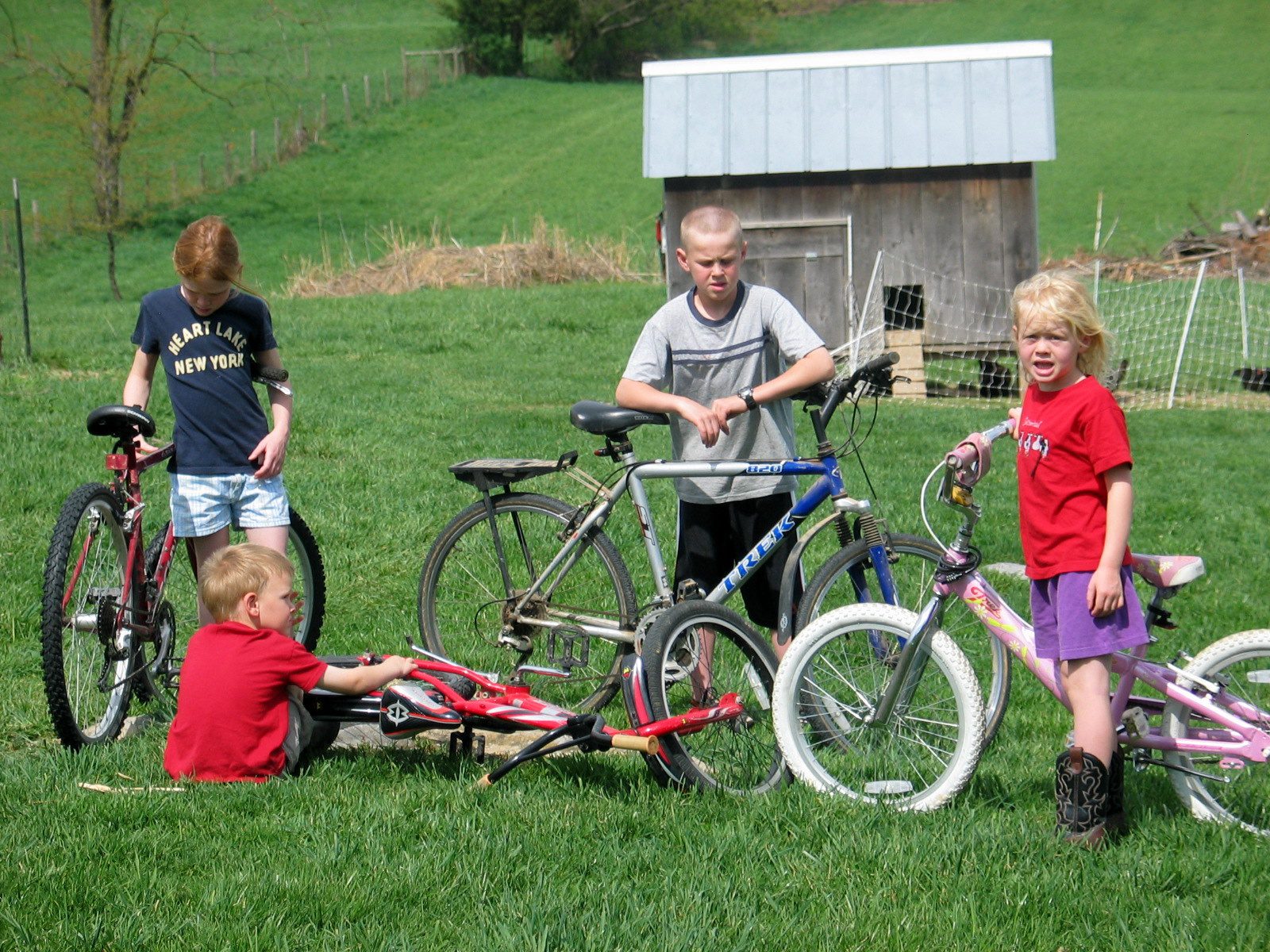 The pack, the crew, the mob … my kids. I birthed those people, you know. 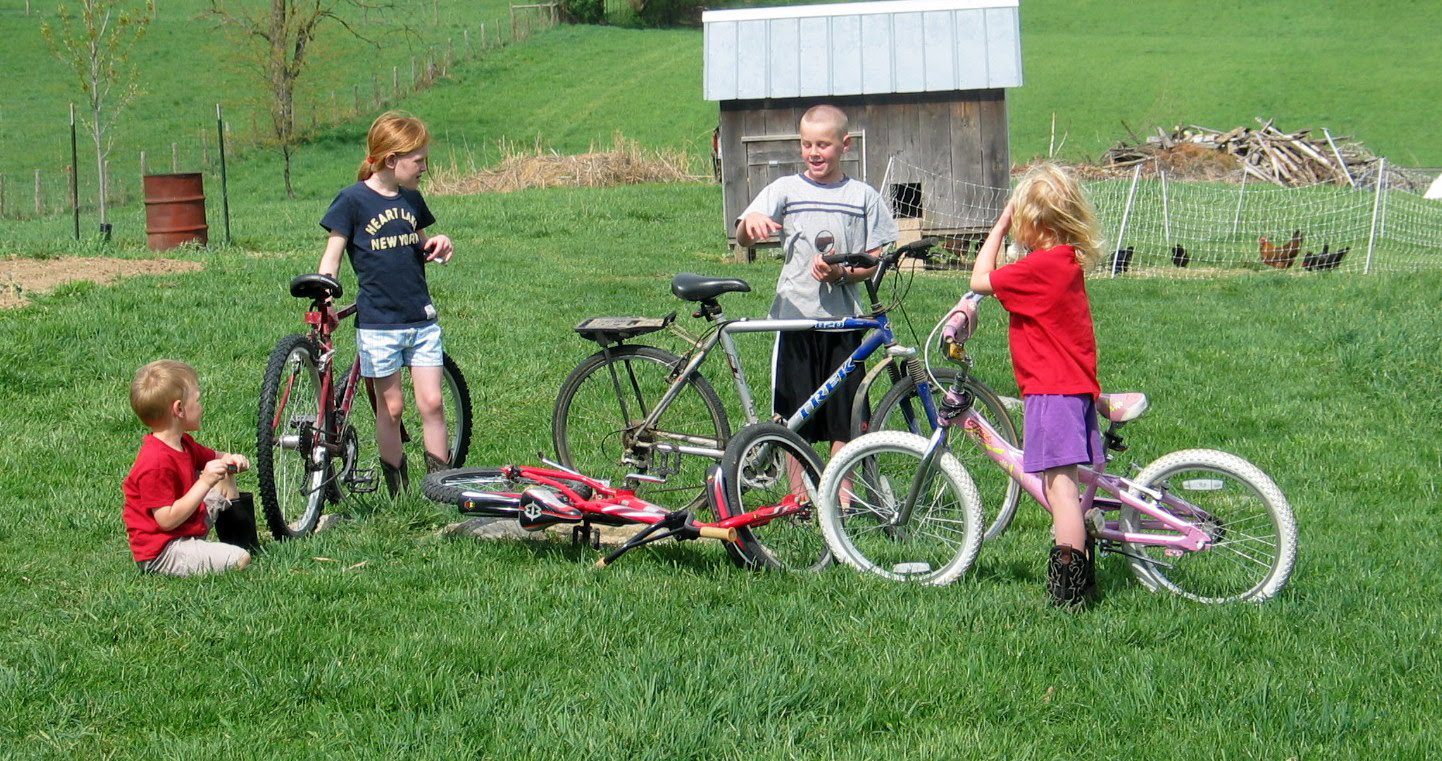 They’re together all the time, sharing the same table, bedrooms, yard, sofas, bathtub. They have good moments, like today when The Baby Nickel had a splinter in his hand and entrusted Yo-Yo with both his hand and the tweezers, then crouched down on the floor, averted his face, and whimpered while Yo-Yo carefully extricated the bit of wood and then fixed him up with a band-aid. 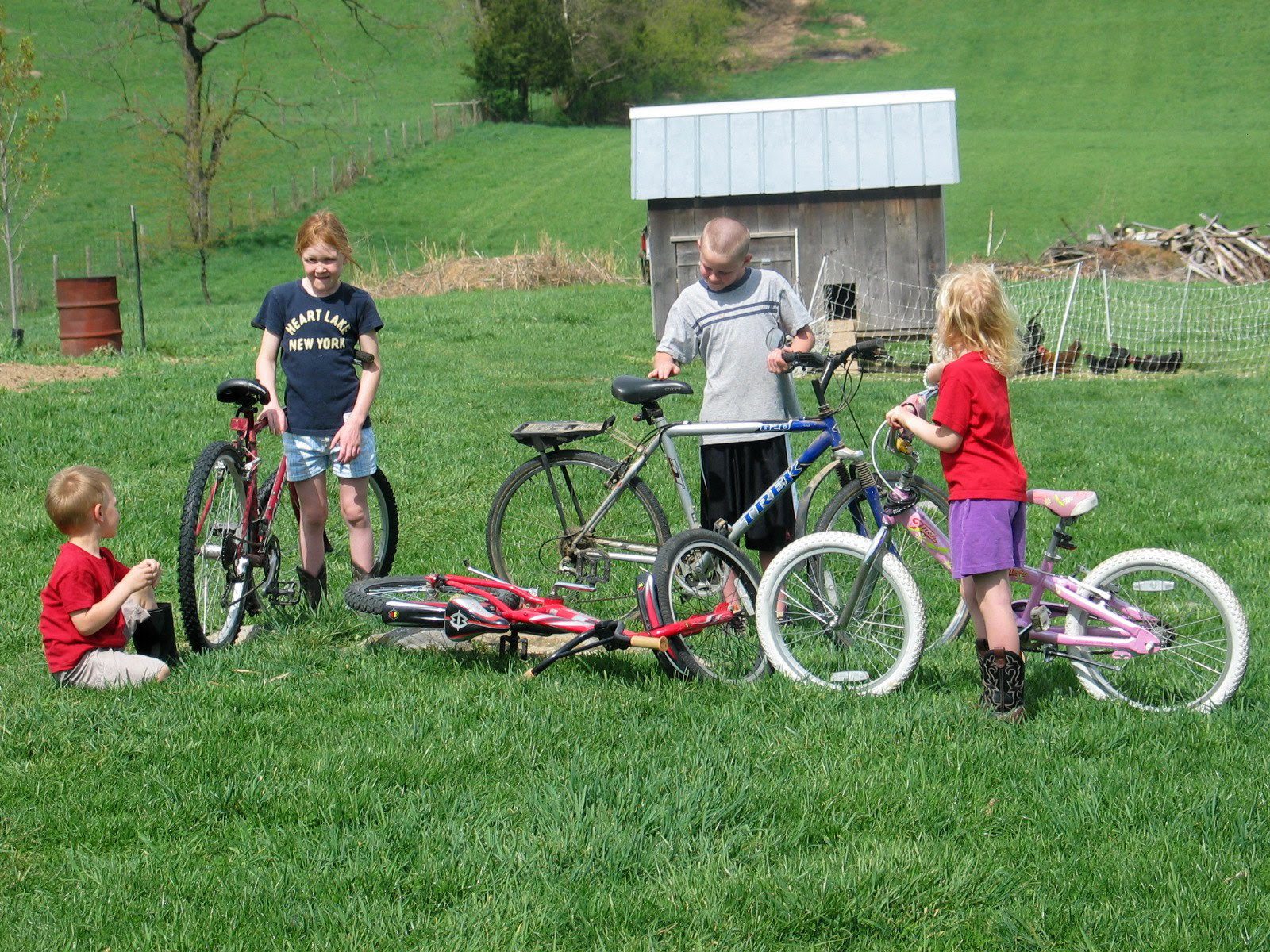 They have their bad moments, too, like today when Yo-Yo threw rocks at Miss Beccaboo (and vice versa) and when Miss Beccaboo poked Sweetsie in the back and when Sweetsie called everybody in the whole wide world bad names and when The Baby Nickel whacked Miss Beccaboo in the head with the vacuum nozzle (I think it was by accident, but one can never be certain). Some (most?) days it feels like the antagonizing and bickering outweigh the cooperation and teamwork. 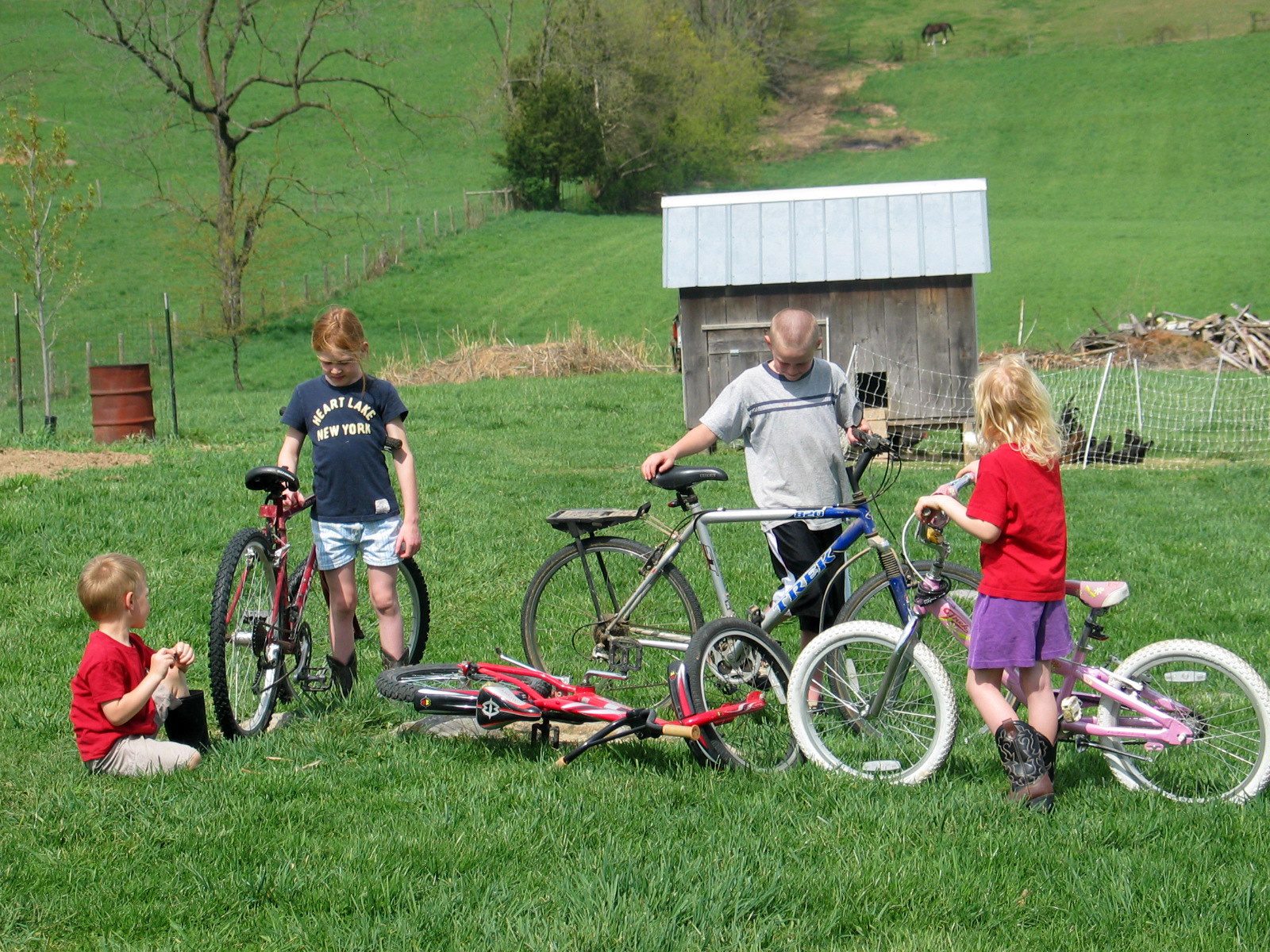 But then there are moments like this where they gel. They relax, bond, discuss, and ponder. No fists fly, no bad names (that I can hear), no crying. 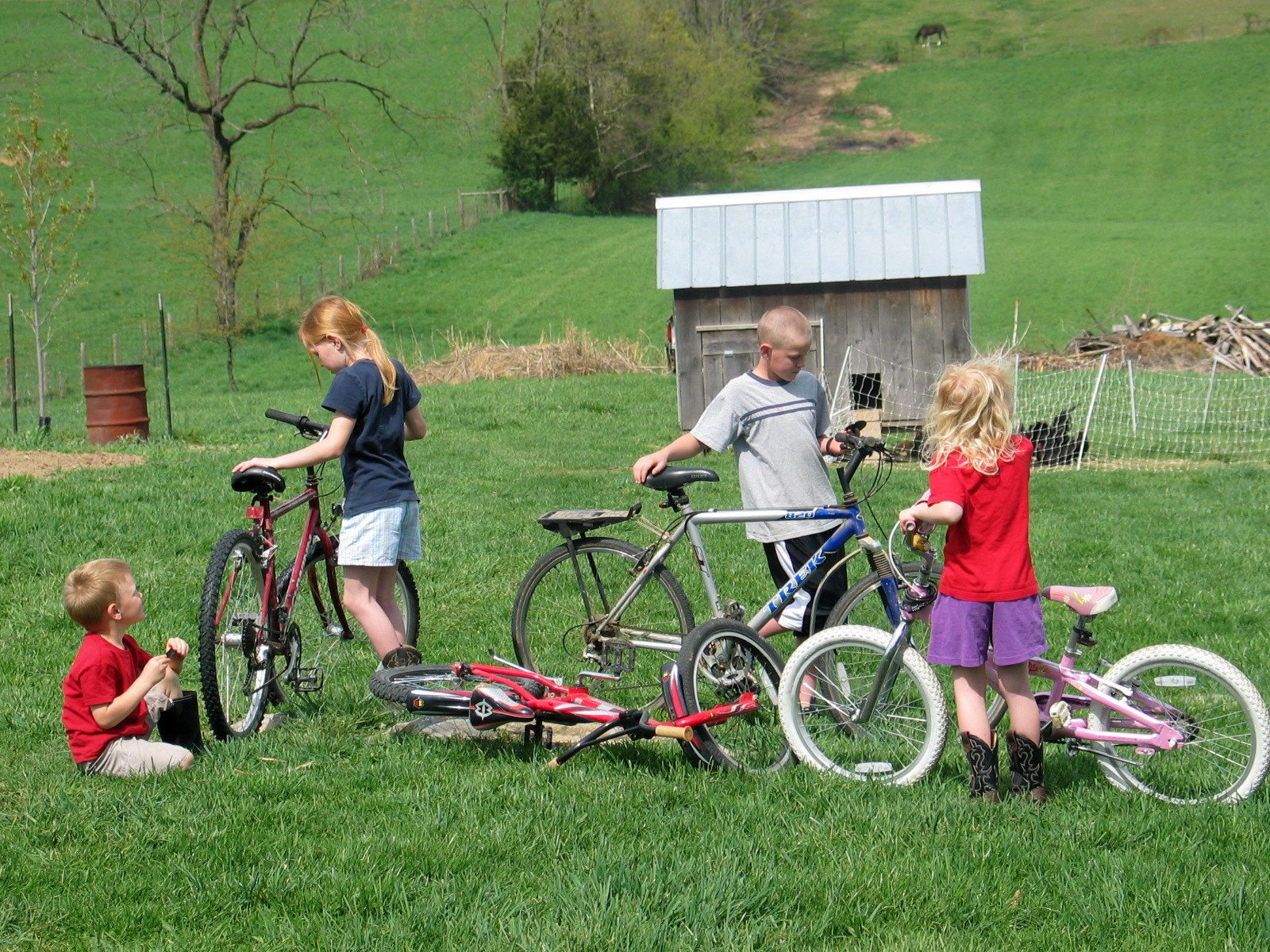 This particular good-will moment took place after two of the kids returned from visiting my parents for several days. I don’t remember which configuration it was—the girls, the boys, the bigs, the littles—but they were clearly pleased to be together again. 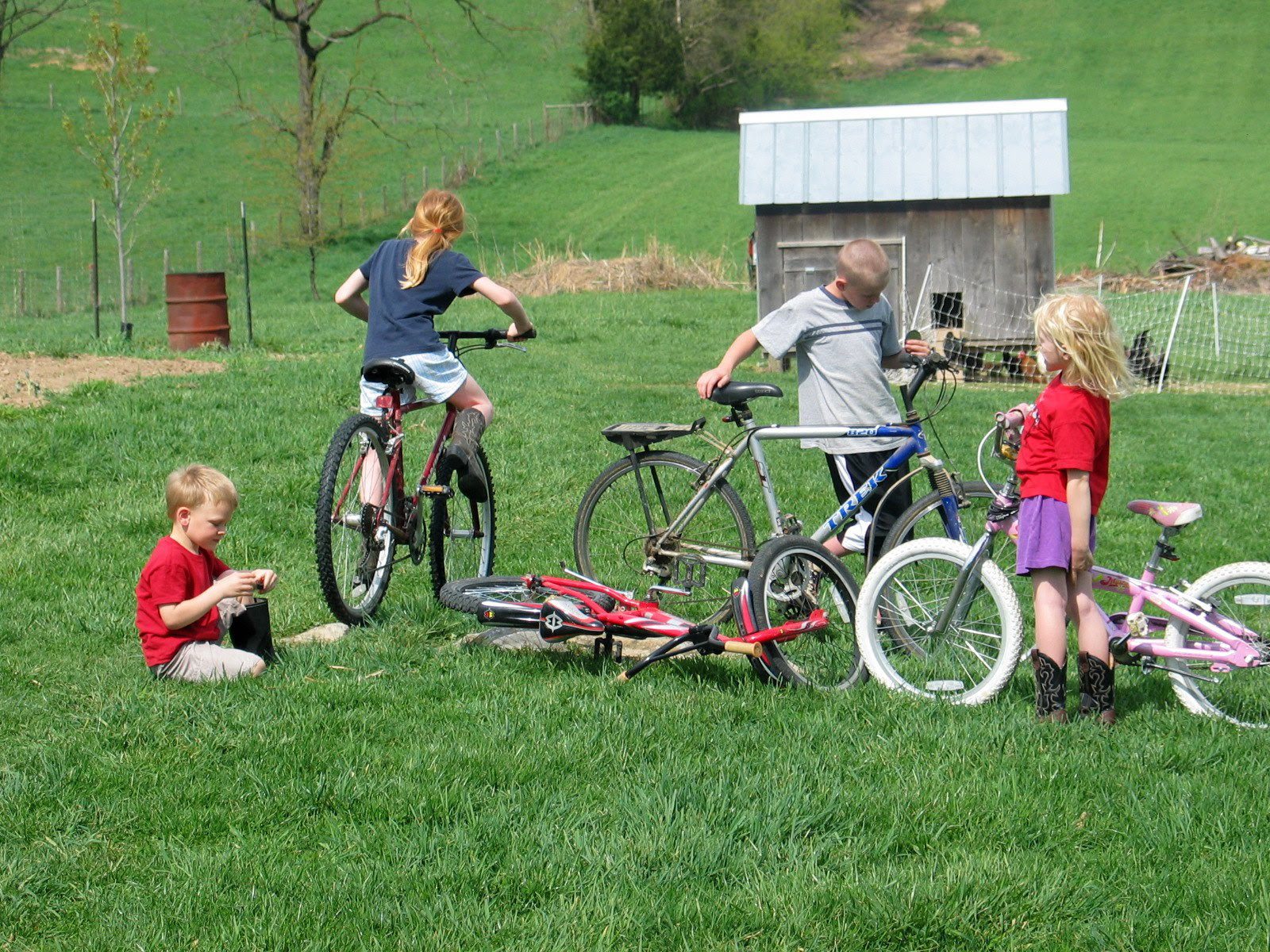 And they were clearly pleased to have their wheels. They love riding bike. They beg to be allowed to ride on the road (where cars go 45-55 mph), and after a high-speed car chase by our house last weekend (a drunk old man was out joyriding on his motorcycle, state troopers in hot pursuit—they went by our house twice), it was easier to explain to them why it is not safe to play on the road. But still, they beg. 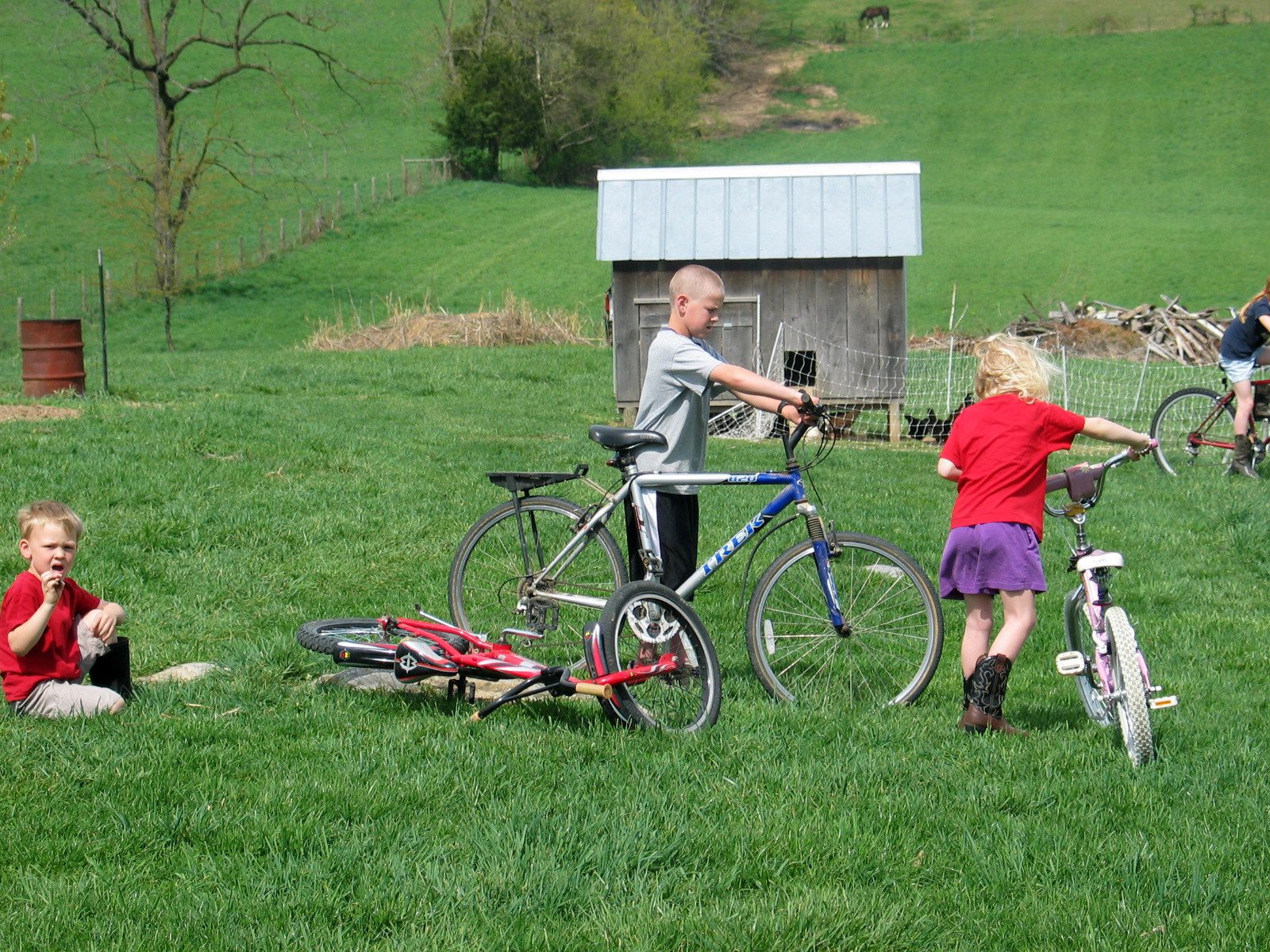 (Maybe you can help me here. We allow Yo-Yo and Miss Beccaboo to ride the half mile to my brother’s, but so far that’s about it. They want to be allowed to take their bikes out for a spin, to go for longer distances. Any advice? At what age is it appropriate for kids to go on bike rides without an adult? I know there’s no magic answer but that doesn’t stop me from wishing there was. This whole growing up and independence thing is a little unclear at times.) 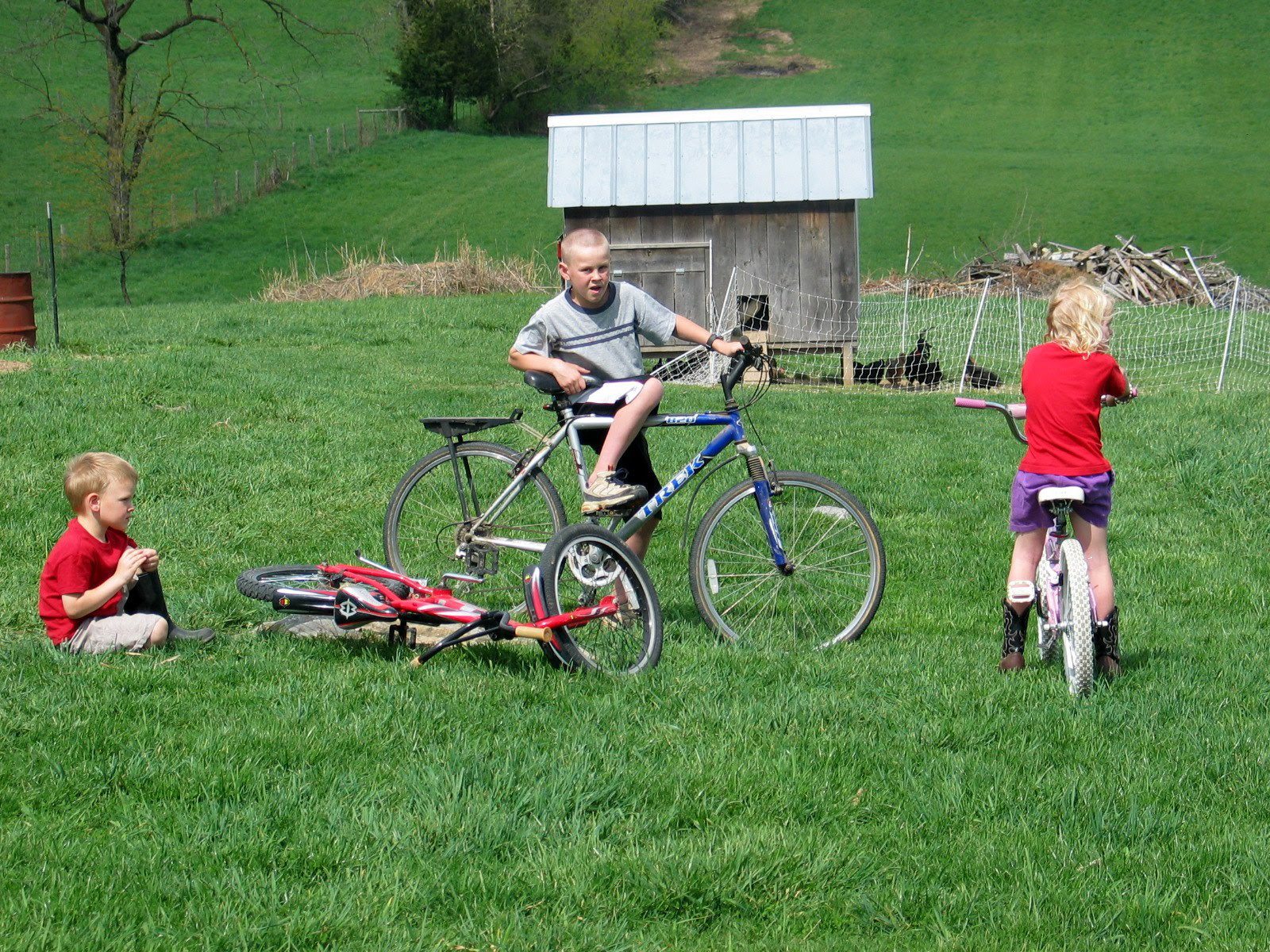 Of course the kids aren’t content to simply pedal around the property. They have to ham things up a bit. I’ve always been a little jealous of other mothers whose kids play with toys the way they are intended, put puzzles together, stack blocks, swing on the swings, etc. My kids are incapable. 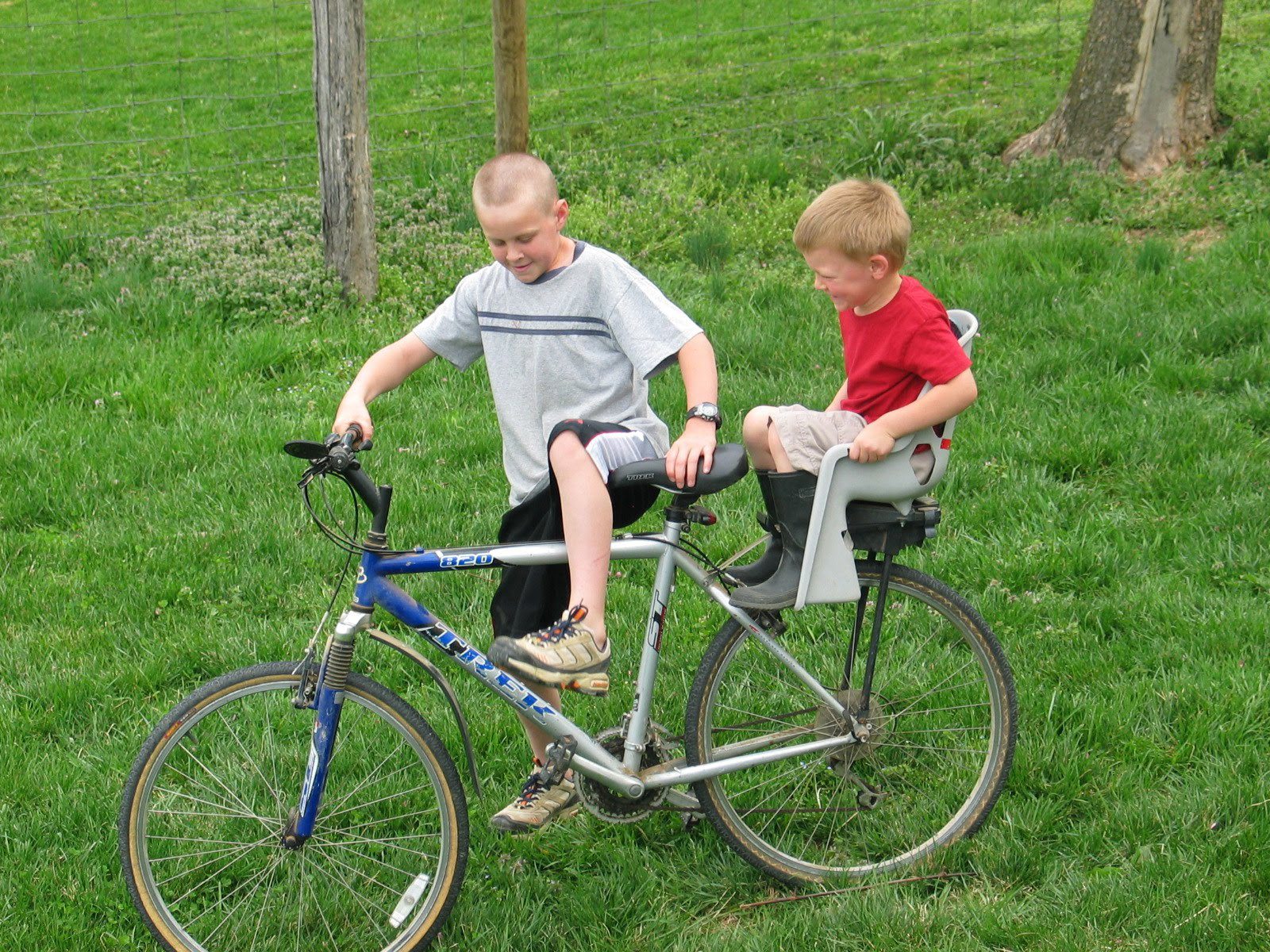 Yo-Yo put the baby seat on the back of Mr. Handsome’s bike and took The Baby Nickel for a ride. 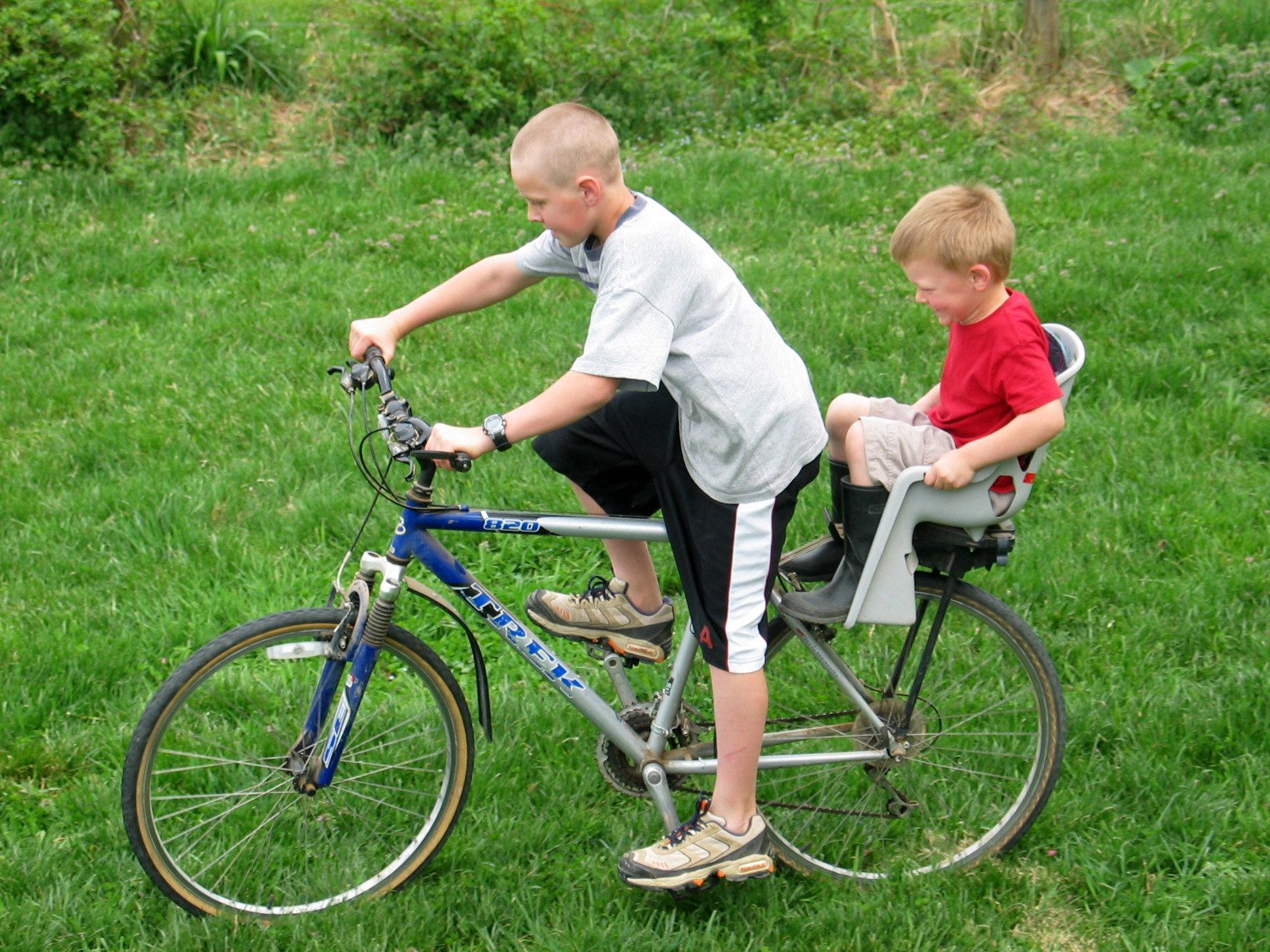 Yo-Yo took all the other kids, plus a teddy bear, on rides. Then he decided that he needed to practice carrying heavy weights so he could get stronger, so he strapped Mr. Handsome’s jacks onto the back of the bike. Like Miss Beccaboo wasn’t heavy enough (she almost broke the seat). I didn’t get pictures of any of that. But it still happened. 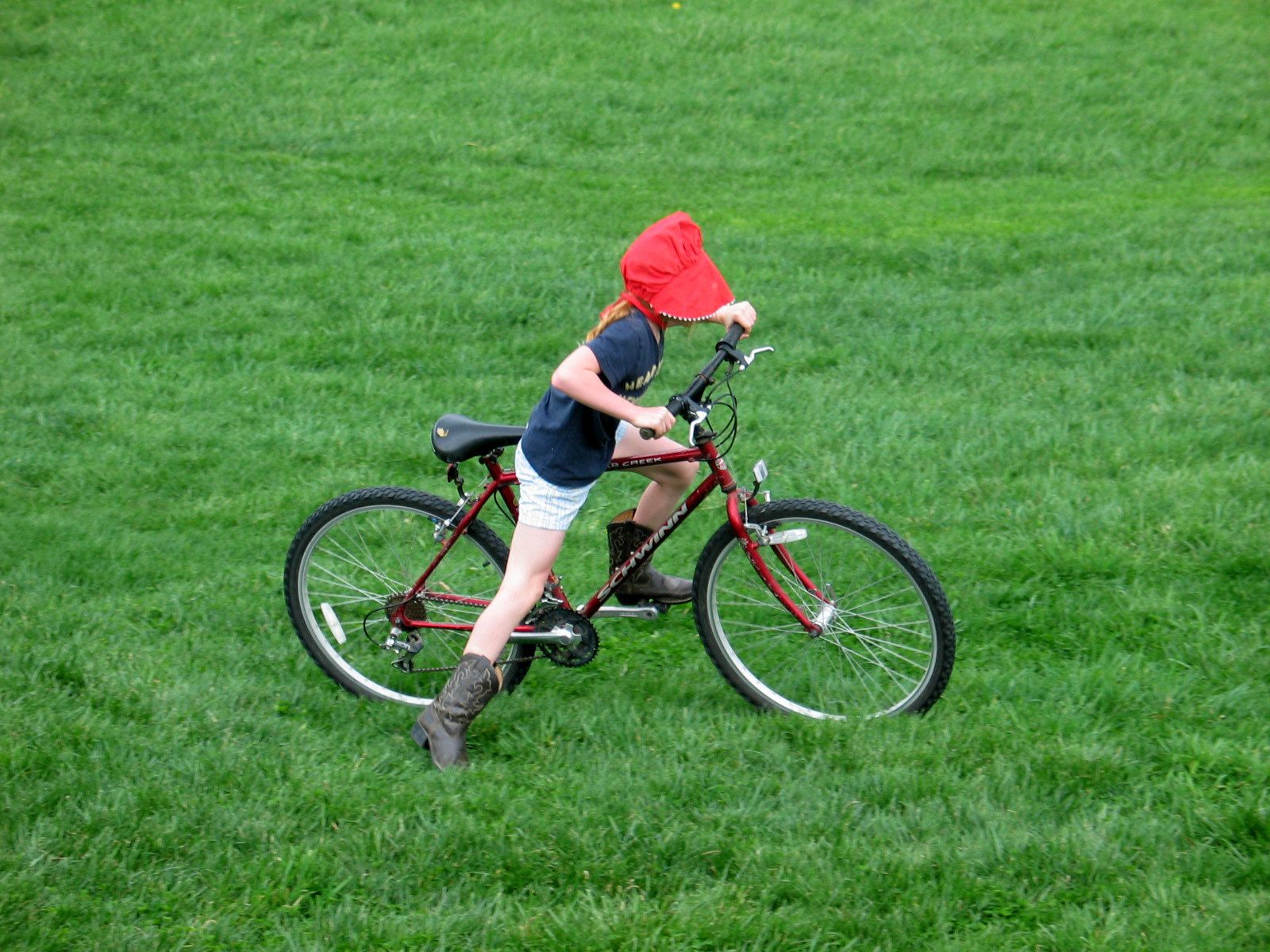 And there goes Miss Beccaboo in her bonnet. Fashion sense isn’t all that important out here in the country where there is only grass to ride on. Shorts, cowboy boots, dirty t-shirts, and calico bonnets—they were meant to go together, right? 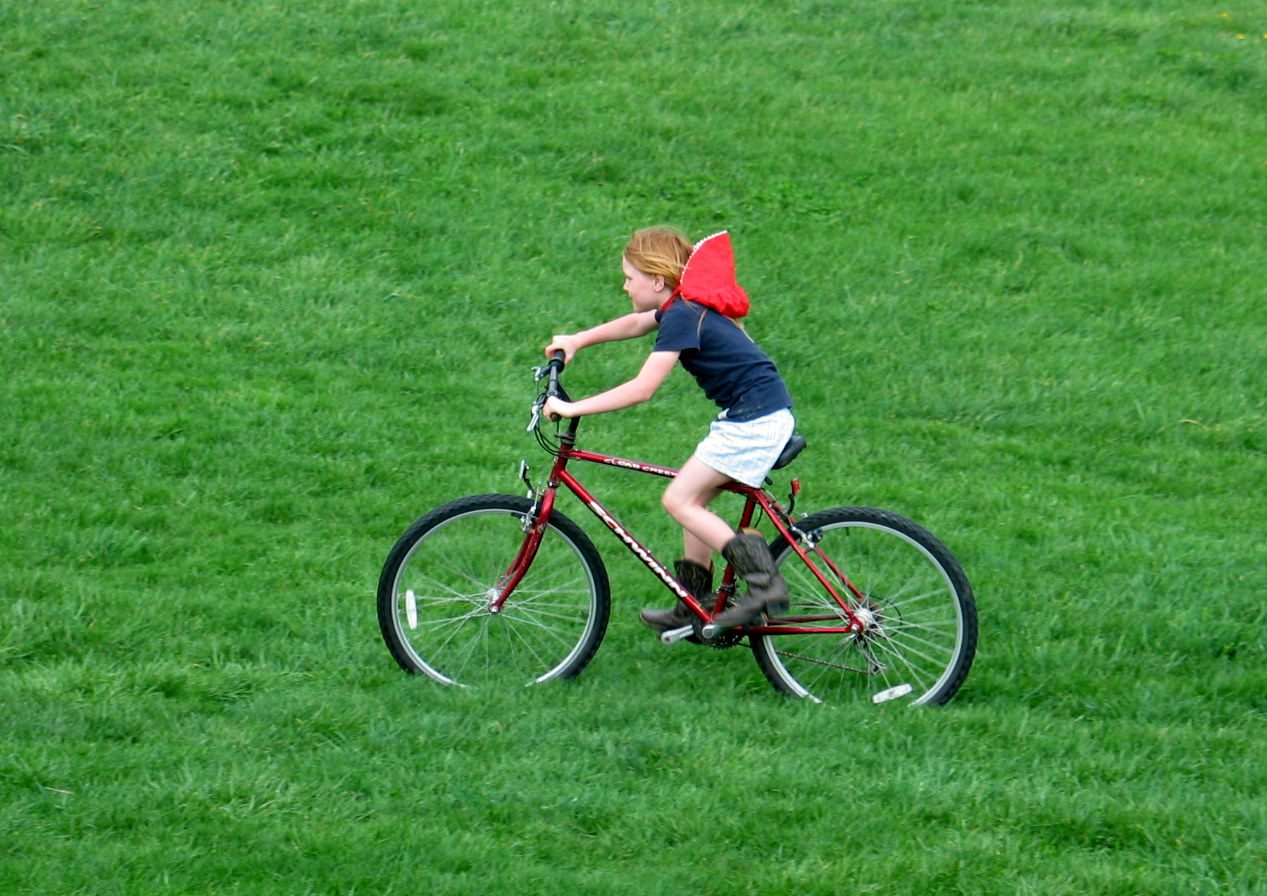 Wheeeee! Look at her go!

About one year ago: Thinking thoughts.