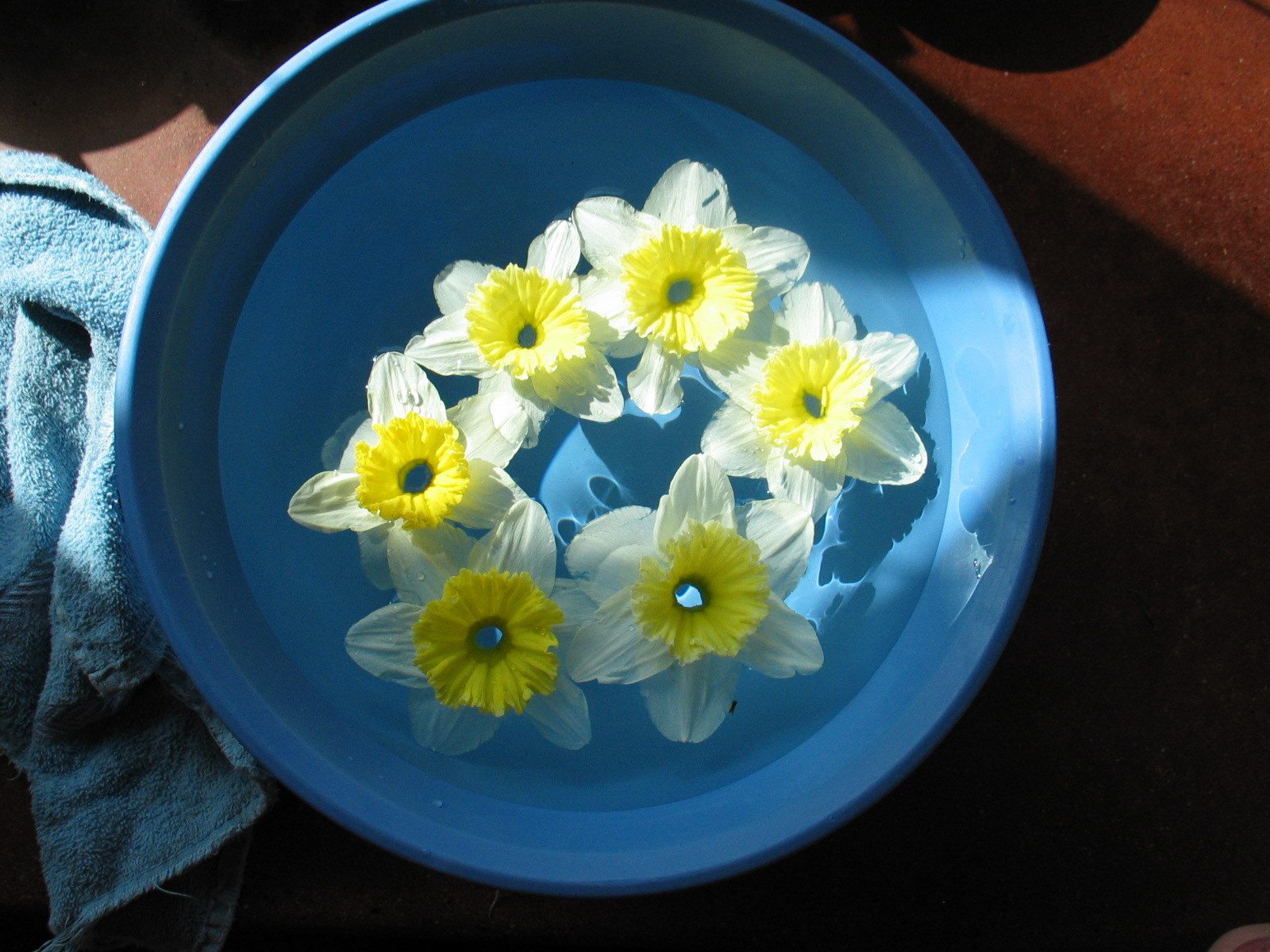 Some weighty matters are clogging up my brain, slowing it down till it can barely function.* Therefore, I was not able to fully maximize The Baby Nickel’s three-hour nap, Miss Beccaboo’s fever-induced extended rest time, and Yo-Yo’s complete absorption in a new novel. Instead of producing something (i.e. writing), I spent the afternoon finishing up Mennonite in a Little Black Dress (a pretty good second option, all things considered) and surprised myself by liking it so very much. (Some industrious seminary student ought to do a study of the varied Mennonite responses to the book. It might be enlightening to find out what sorts of Mennonites like it and which ones don’t. Tied in with theological stances and cultural upbringings, and you’d have the materials for mighty interesting paper.)

I then forced myself into the kitchen to jive with The Chieftains and make a quadruple batch of French chocolate granola. Sweetsie accompanied me. She danced around in a pink leotard, played with her little plastic horses, and harvested a bouquet of daffodils which she then de-stalked and set to floating in a bowl of water. (Later, when I thought she was done with them, I disposed of the cumbersome arrangement, much to her dismay and subsequent teary rage.) 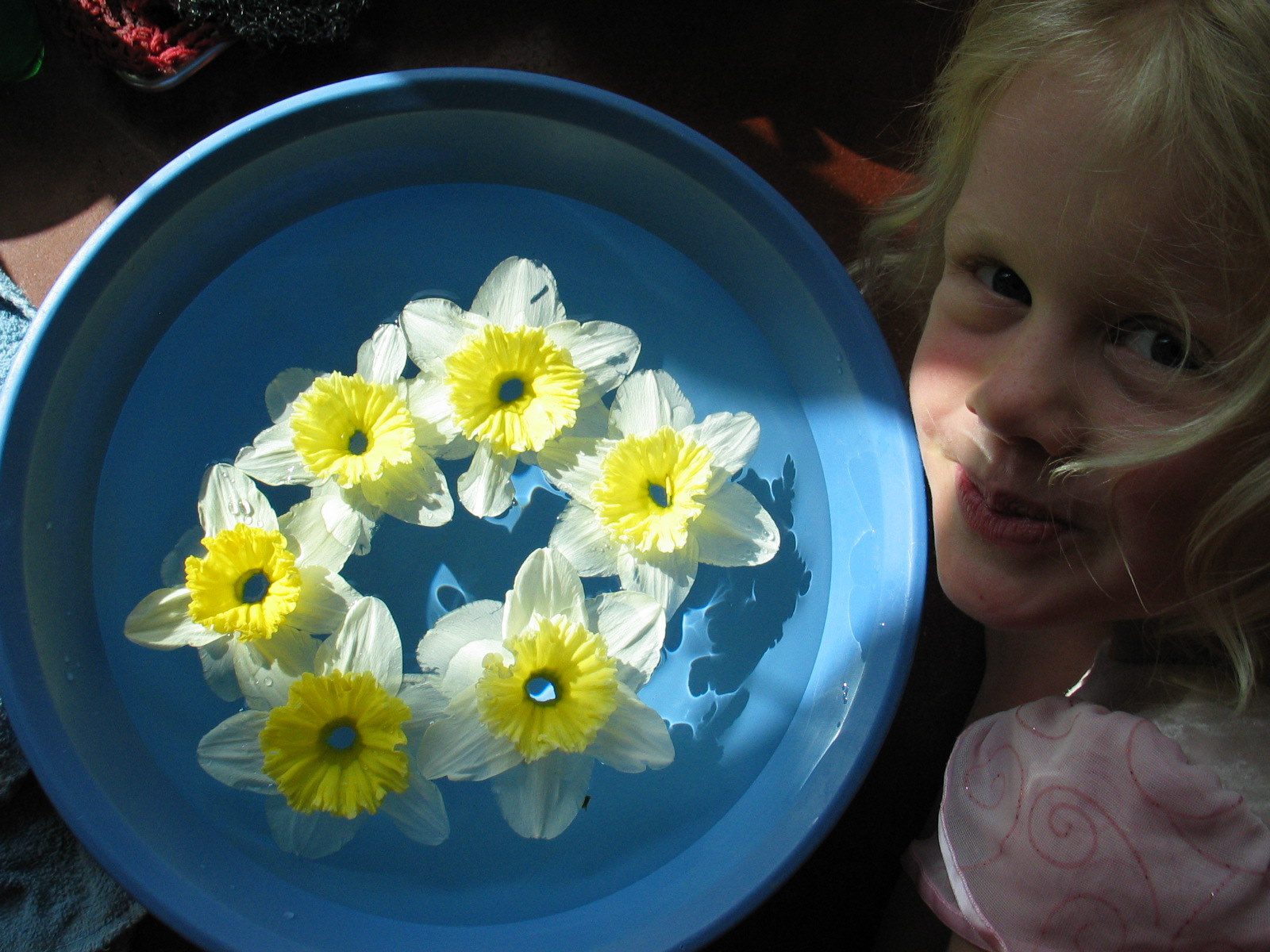 Just as I was beginning to chop an onion for supper’s barbequed chicken pizza, my sister-in-law stopped by with a pan of still warm chocolate-oatmeal cookies-turned-bars, some empty egg cartons (for the glut of eggs we’ve been struggling with), and two (2) (TWO!) bags of tortilla chips.

Which brings me to my next point. I nearly lost the bet. If it weren’t for the grace of Mr. Handsome, we would’ve feasted on hamburgers and french fries tonight. But Mr. Handsome, in all his vast generosity, hath bestowed favor upon my undeserving head and granted me absolution. I’m free to continue hoarding my nickels and scrutinizing him for one false move. And when I see him trip, stumble, and fall, I will POUNCE. (I’m not nearly as nice as he is.)

(We even brought the matter before a few of our fellow Mennonite congregants, and after reading scripture and praying over it [I’M KIDDING!] [about the scriptural/prayer component], they were evenly divided. Some, including a trusted friend [!], declared me a definite loser; others pointed to my innocence and naivete [tax? there’s such a thing as food tax?] and stated I was fully innocent and still a viable contestant that needed to be reckoned with. The game goes on.)

(Honestly though, I feel like throwing in the towel. I need a can of coconut milk for a peanut soup I’m hankering to make. The recipe calls for five [5] [FIVE!] cups of peanuts, which would help considerably in my efforts to empty my freezers [I have about 15 pounds of the nuts squirreled away]. Wouldn’t the utilization of the nuts negate the coconut milk expenditure? But no, don’t worry, I’m going to stick this out. The peanuts aren’t going anywhere. Mr. Handsome is going to rue the day, just you watch.) 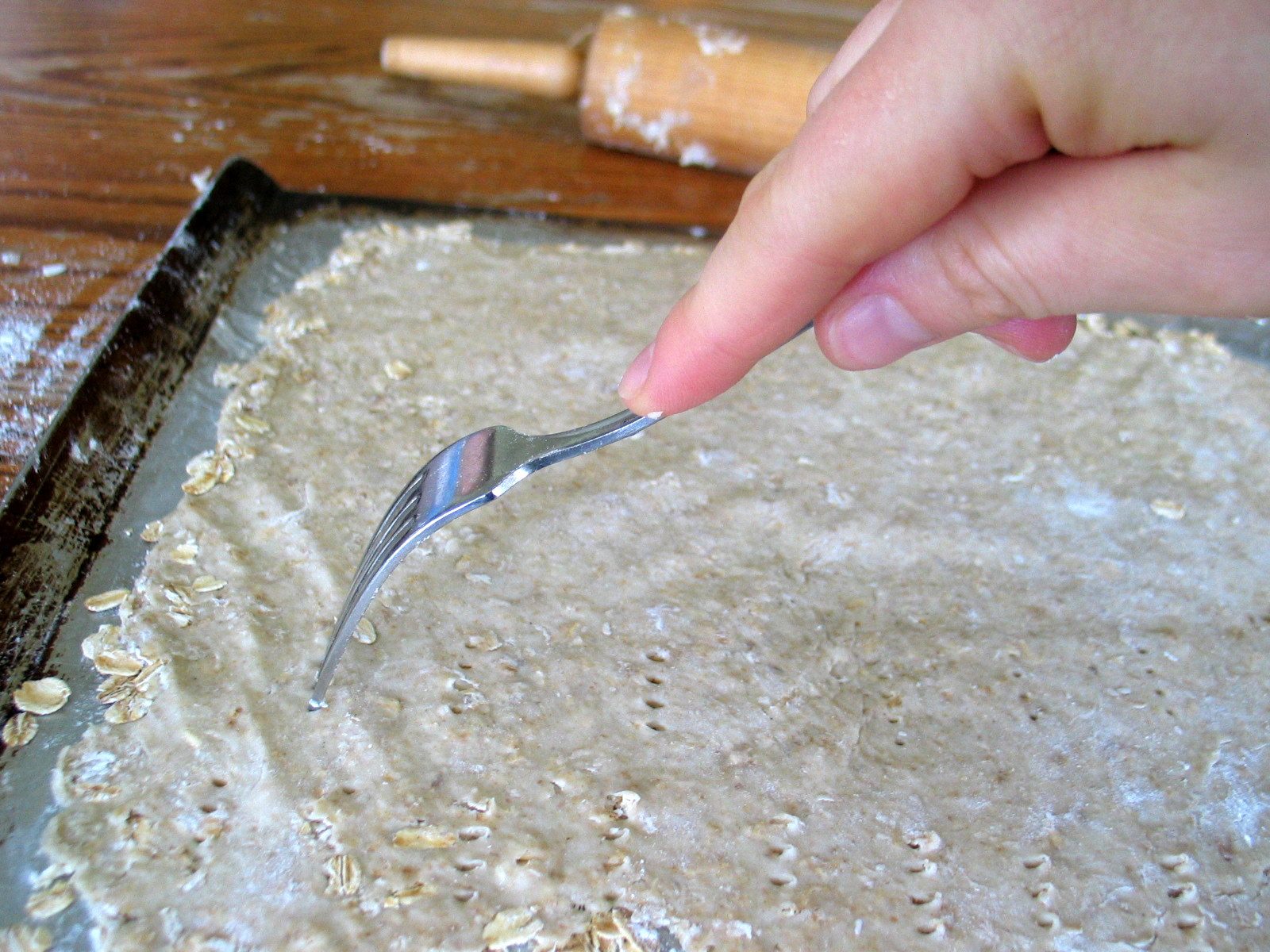 Anyway, changing the subject. I made crackers. (Did I give you literary whiplash? Sorry.) 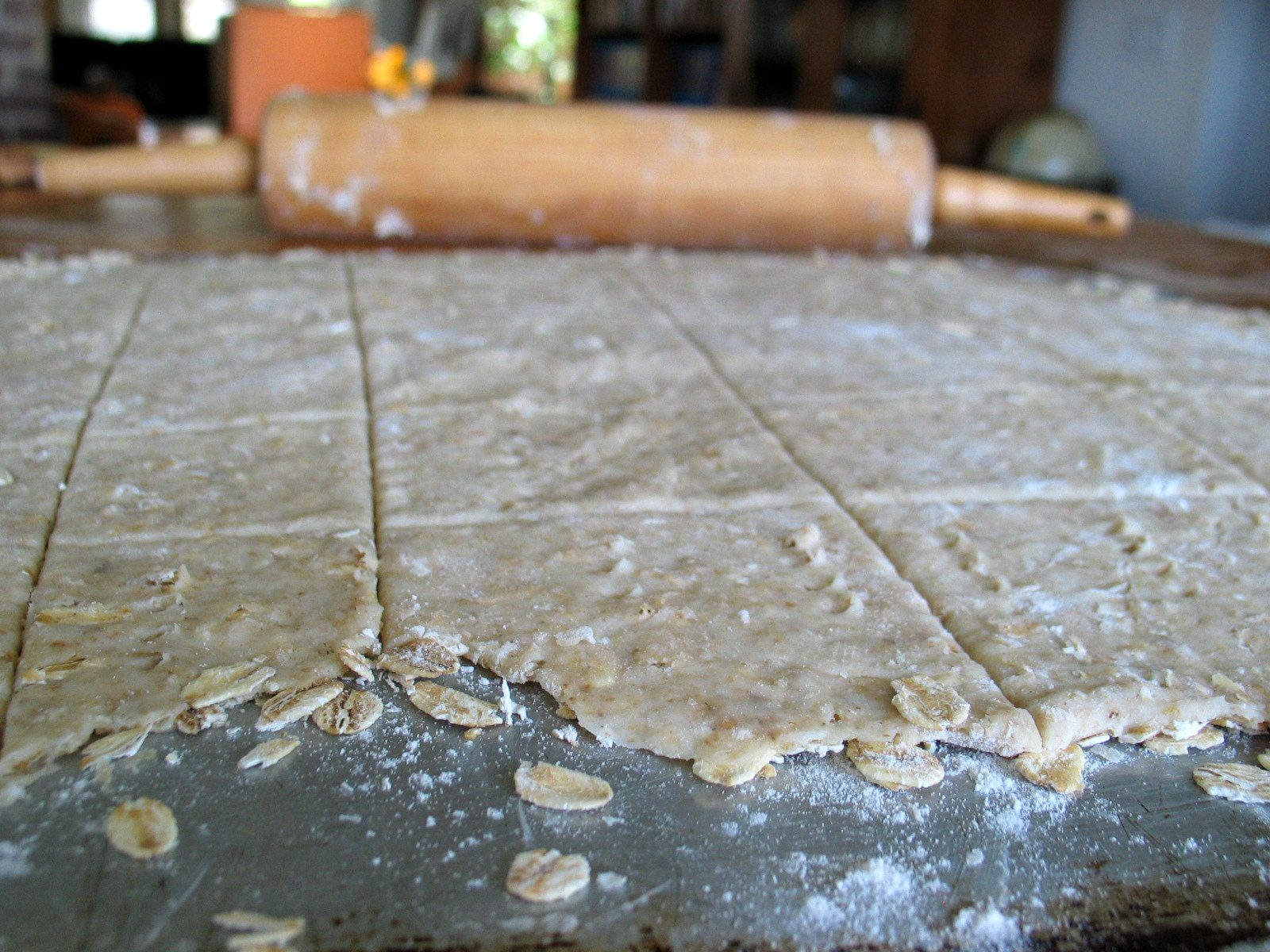 When I told you I was going to work on my cracker repertoire , I meant it. 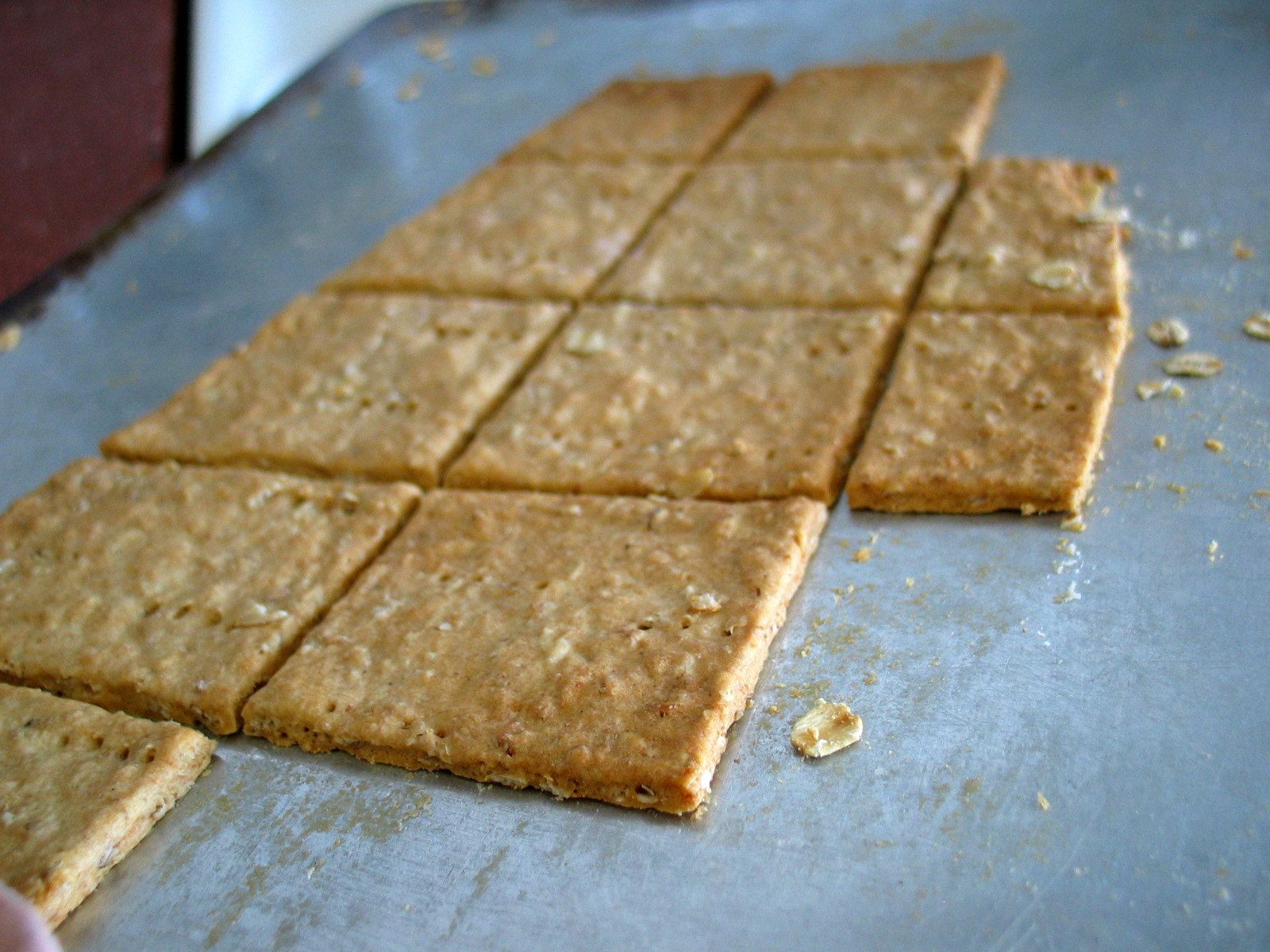 These crackers, first time around, made me happy, oh so happy. I have ideas for how to tweak them, but there is no rush. It’s more a maybe-if-I-feel-like-it-later attitude. 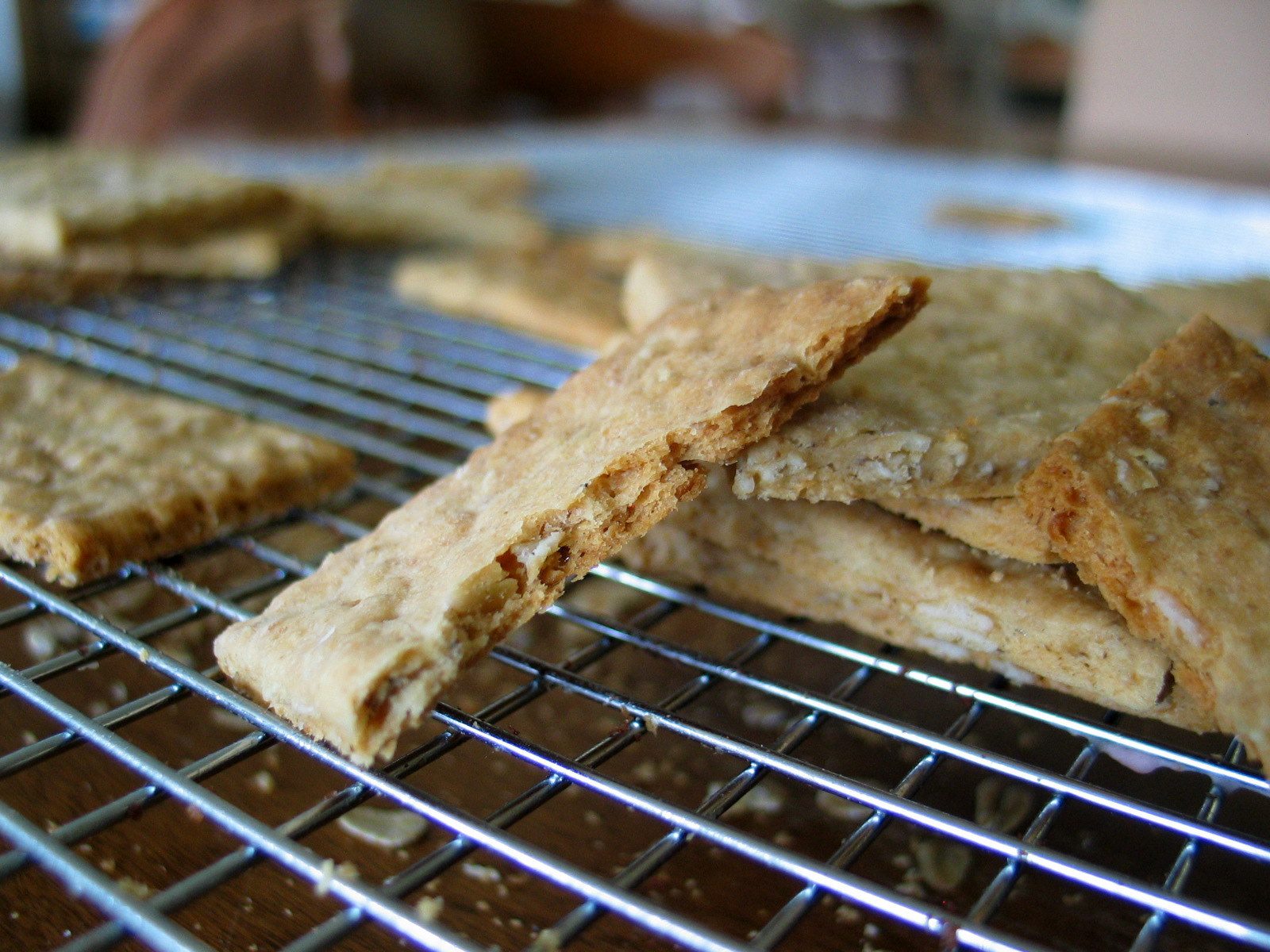 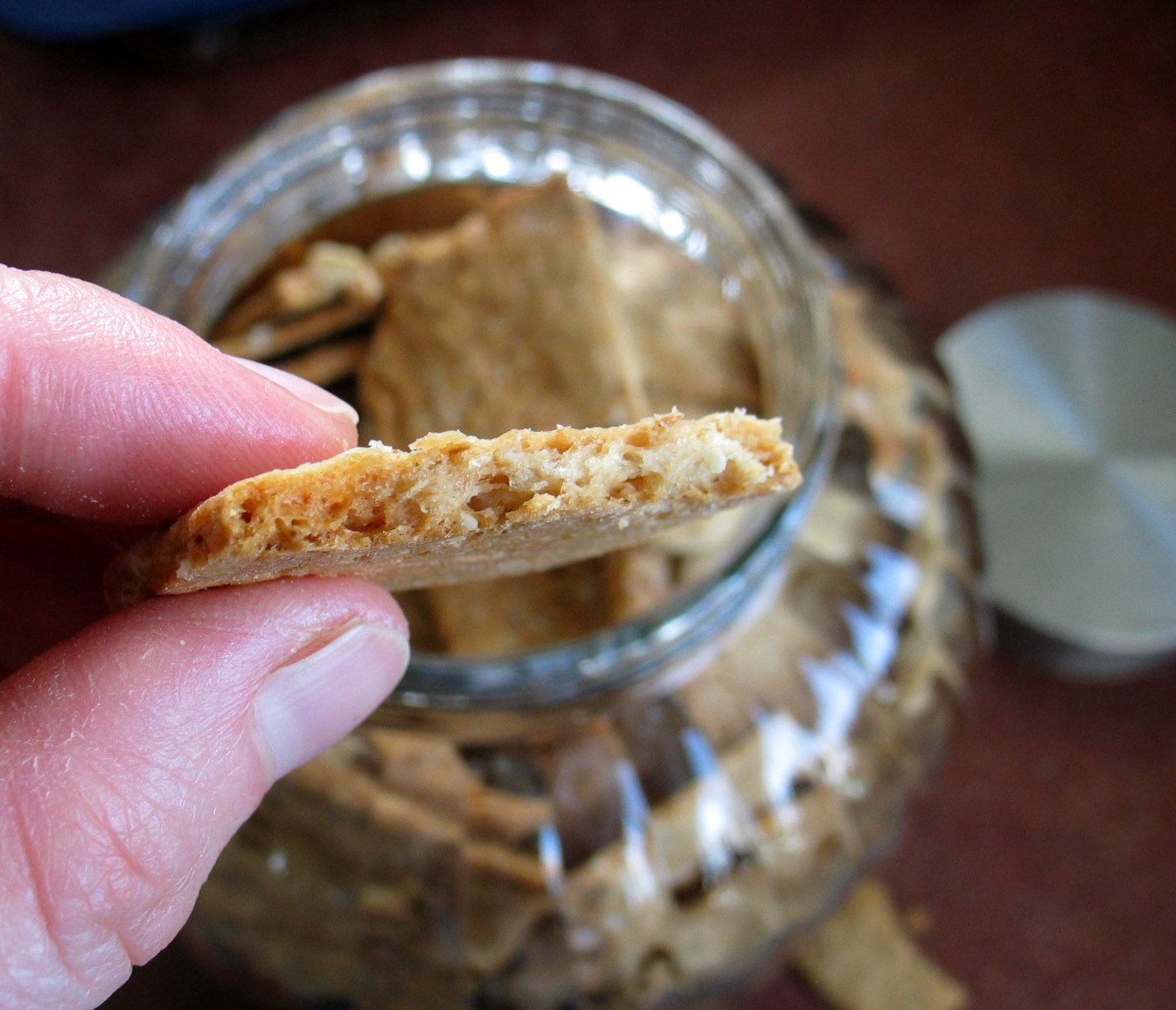 Really, what more could I ask for from a cracker? That Mr. Handsome would sing my praises profusely? No, that’s going a bit too far. I’m a reasonable woman, after all. 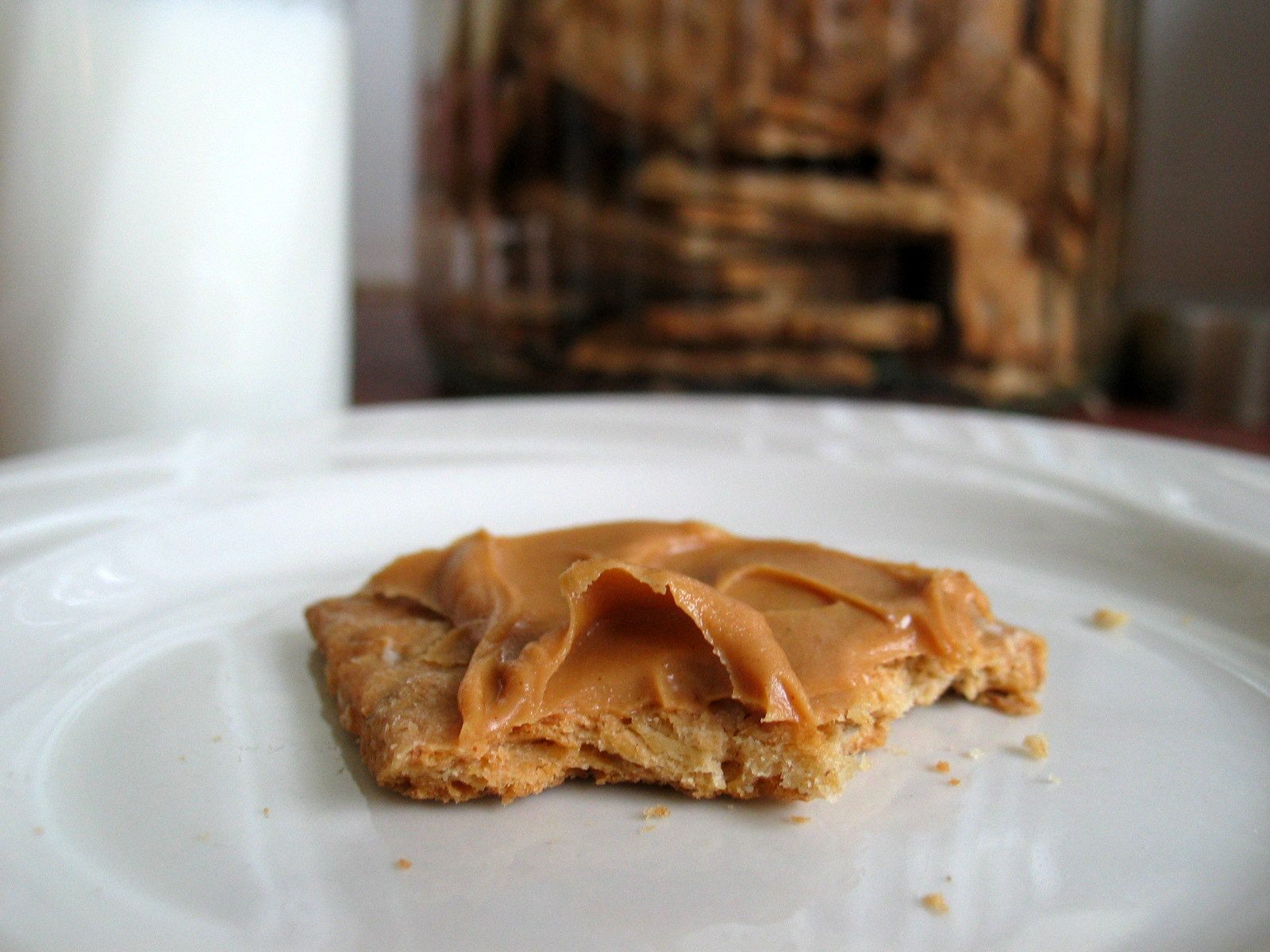 Now, if I were to play around with these, I would add more whole wheat, sub several tablespoons of lard for coconut oil (to increase the crunch factor), change the sugar from white to brown and increase it a tad, and add a healthy dose of cinnamon. The end result would be called Oatmeal Graham Crackers. Can I get an “amen?”

Cream together the butter, lard, and sugar. Stir together the dry ingredients and alternately add them to the butter-sugar mixture with the buttermilk. Cover the bowl with plastic wrap and chill in the fridge for at least one hour or overnight.

To bake:
Divide the dough into four parts, and roll out one of the parts on a greased cookie sheet that has been generously sprinkled with rolled oats. The dough should be about 1/8th inch thick. Use a fork to poke holes in the dough every half inch or so, and then cut the dough into squares (or whatever shape is desired) using a pizza cutter or knife.

Bake the crackers at 350 degrees for 10 to 20 minutes, or as long as possible without them burning. Remove the crackers along the edge as they begin to brown.

Transfer the crackers to a rack and cool completely before storing in an airtight container. (I suspect they freeze well, too.)

Yield: about a gallon

*I’m not saying what the weighty matter pertains to. My lips are sealed; my fingers are crossed. If it amounts to anything, I’ll tell you later. But rest assured, nobody is in trouble.

And no, I’m not pregnant.

About one year ago: Coconut Brownies.