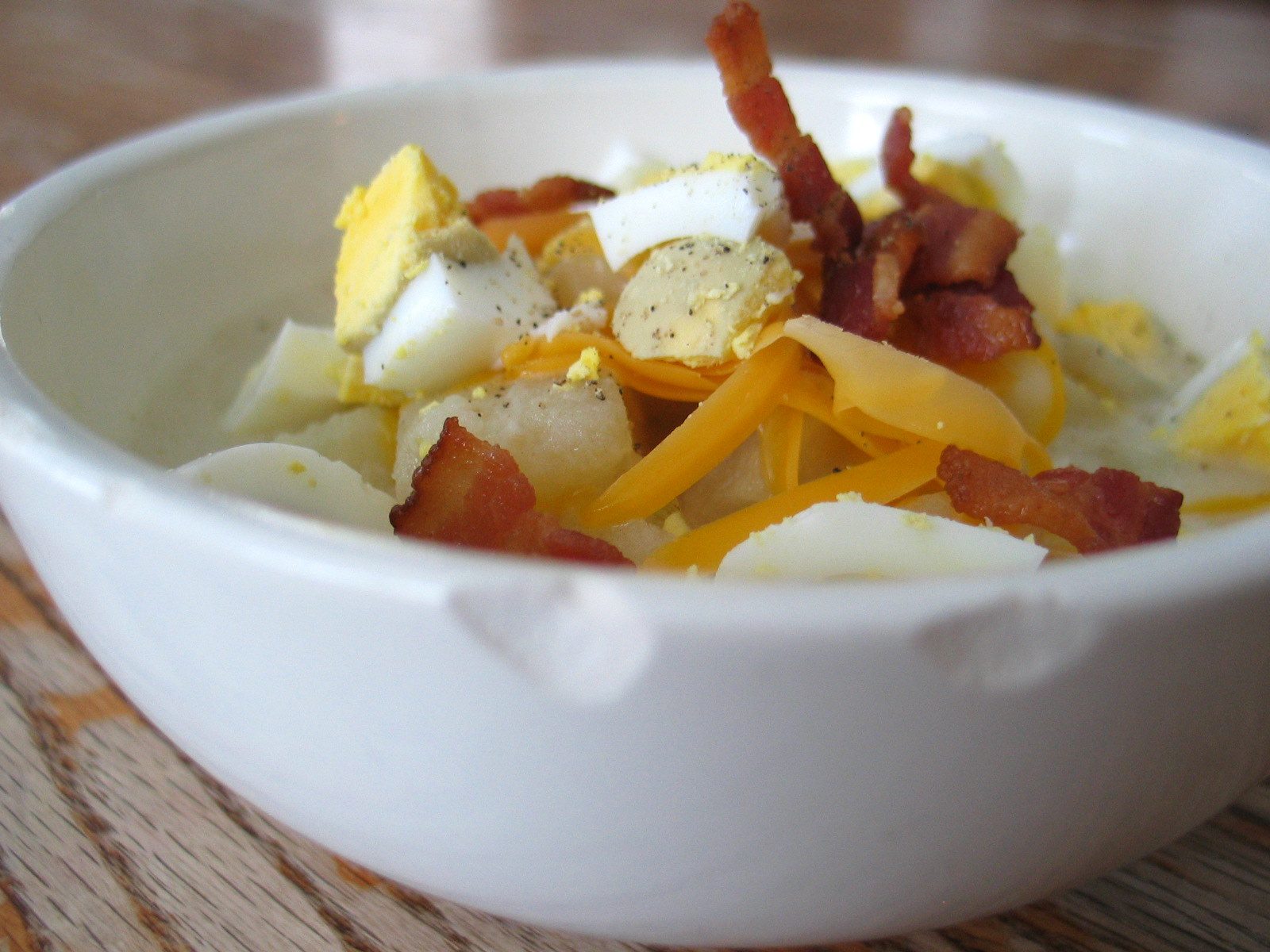 This morning I got sweaty hot hanging up laundry while standing a foot off the ground on a lingering snow bank in a pair of Mr Handsome’s rubber boots. (I was wearing other clothes, too, but no coat.) As I pinched the clothespins to fasten the towels to the underwear to the shirts, three separate flocks of geese flew above me, heading due North. I felt like kicking up my heels to the tune of their nasal honk-honks.

Which was a good thing because The Baby Nickel was using a hammer in the clubhouse and I had to ‘kick up my heels’ (read, walk/waddle/stomp) the whole way across the back forty to confiscate it. And then to the house because Yo-Yo was hollering about Something Or Other. And then over to the pump to redirect (that’s such a nice way of saying ‘making her quit’) Sweetsie who had decided that two feet of melting snow didn’t provide sufficient moisture for the great, gloppy, squishy outdoors and was filling up the green watering can, and completely disregarding my stern “turn it off right now” commands.

It was a rough day. All four kids decided to cop an attitude. Simultaneously.

“Both of you go sit on the sofas,” I ordered. “Sweetsie, you on the brown and Miss Beccaboo, you’re on the green. Now, practice coughing into your elbow for a bit.” They commenced hacking.

The Baby Nickel looked at me and then coughed, mouth uncovered, all over the table. “Do you want me to go sit on the sofa till I can work it out?” he inquired happily, sliding off his stool before I even had time to answer.

And so it went.

Last night when I was tucking Sweetsie into bed, she said, “Can we have Dutch puff for breakfast tomorrow? We always have granola and oatmeal and baked oatmeal and I’m tired of that stuff!” I studied her, my sulky, blond-headed, thumb-sucking third child, and then said yes.

“Honey,” I said, “You can’t have everything you want all the time. I listened to what you said last night and made Dutch puff for breakfast this morning, so I don’t want to hear you complaining now. I don’t want you to be a kid who fusses whenever you don’t get what you want. You need to appreciate what you have and quit the whining.”

“Then why don’t you give me to Shannon!” she retorted. (My friend, mother of Sweetsie’s friend.)

Humph, I thought. Don’t tempt me.

For much of the morning my kitchen windows were foggy because I was boiling down another four gallons of sap to yield another pint of liquid gold. If you try to tell me I’m not a magician, I won’t believe you.

Mr. Handsome set the alarm for three a.m. Monday morning. He needed to take the two loaves of bread that was busy proofing in the refrigerator out of the refrigerator so that they would be ready to go in the oven first thing in the morning—he wanted to give a loaf to the owners of the house where he’s been working over in WV. I left the house before him that morning to go to an appointment, all four kids in tow. The house was a disaster when we left, but five hours later when I returned, it was spotless, the only thing out of place was a solitary loaf of bread, wrapped in a red-checked cloth, that was sitting on the counter by the stove, forlorn and forgotten.

The peanut butter sandwiches we had for lunch were extra delicious.

There are still huge swatches of snow on the ground, several feet deep in some spots, but there are also huge bare areas. The kids run around in shorts and tee-shirts, sprinting through the drifted snow in their bare feet to get to the trampoline, the clubhouse, the chicken coop, the barn. When they come inside, their fire engine-red toes track water and mud everywhere.

Yo-Yo and Miss Beccaboo painted their arms and legs with mud—it was their armor, they said—but then they couldn’t wash off at the pump because the water was too cold (and they had to stand in snow to get to it).

This climate is foreign to me. I feel like we’ve been relocated to a different country, maybe Iceland, and like a National Geographic photographer ought to be snapping photos of our exotic existence.

The robins were singing this morning.

I know I’ve been loading you up with carb recipes. Consider it your last chance to indulge before we get inundated with crunchy green things. Before long we’ll all be outside digging in the dirt, and our tastebuds will have shifted from craving stews and hot biscuits to longing for spinach, lettuces, and new peas.

But we’re not quite there yet. We still have a few more weeks left in which to use up all that produce that got put up last growing season. And so we grit our teeth and cook up another bag of frozen green beans, open another jar of canned fruit, thaw another quart of strawberries (to go with the Sweetsie-loathed oatmeal breakfasts). 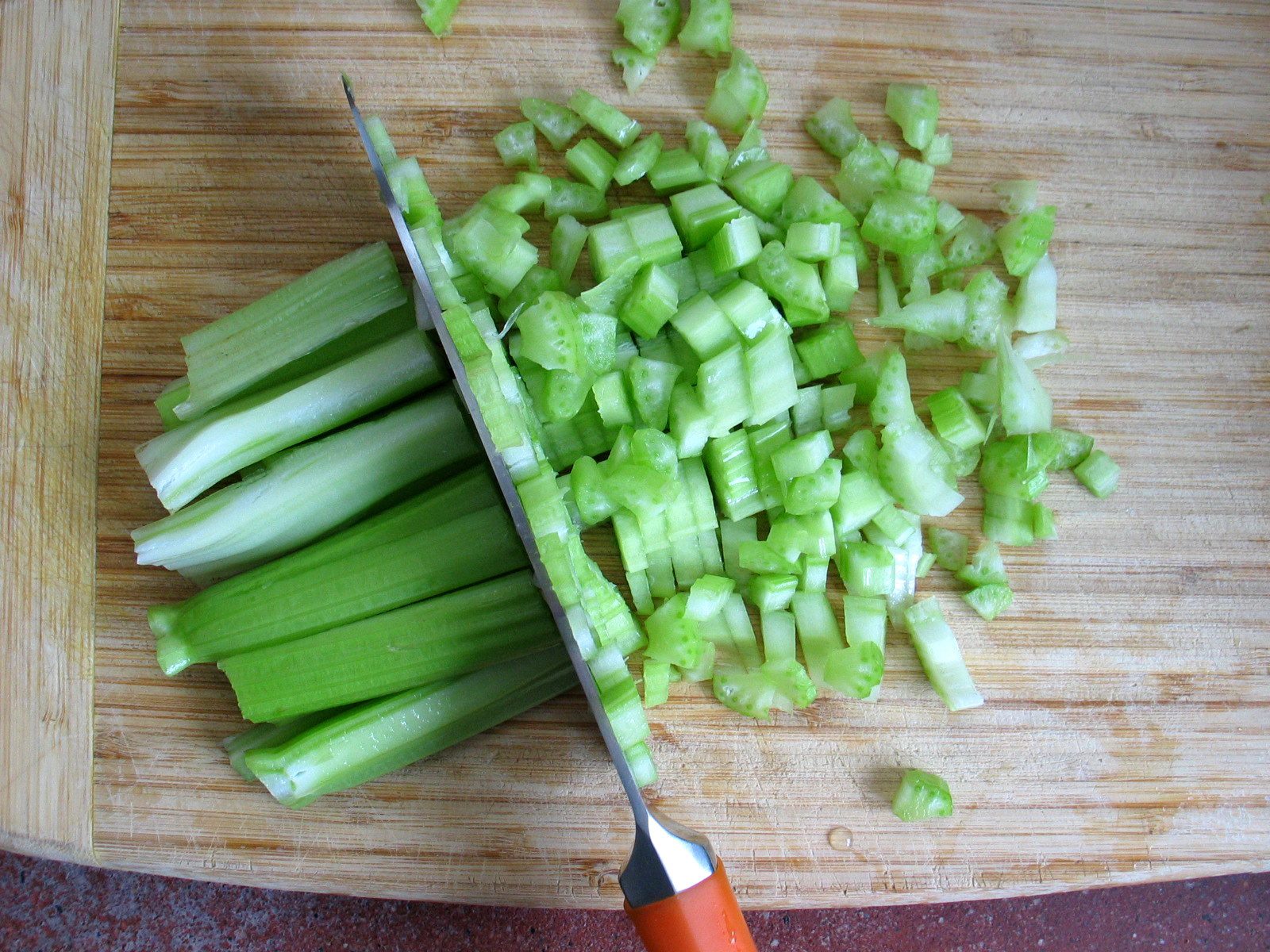 The following soup recipe does not cause me to grit my teeth, flavor-wise, in any way, but it is, in my mind at least, a winter dish. Hot soup equals frozen ground, no? 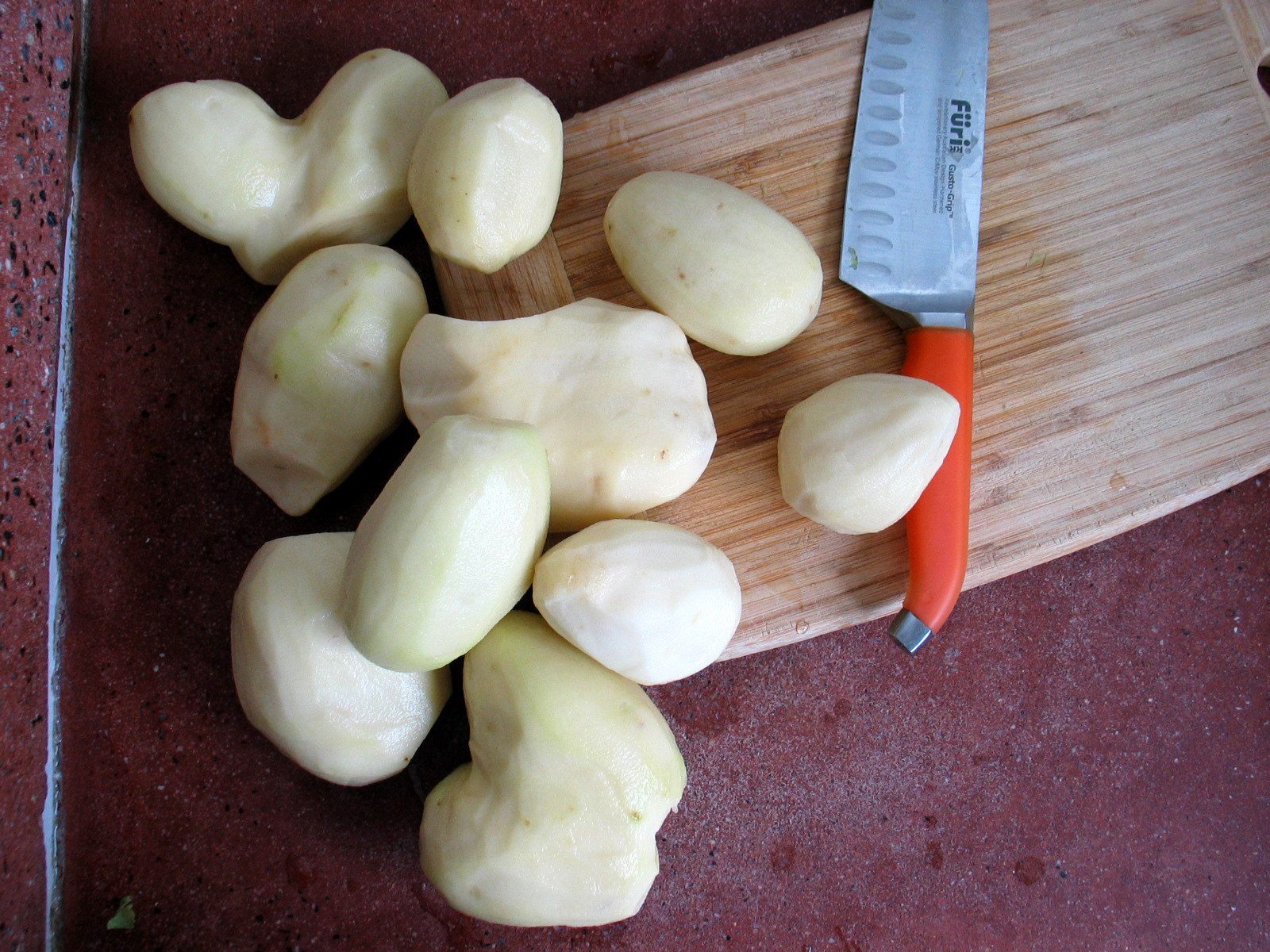 However, if you have a few wrinkled, sprouting spuds rolling around in the bottom of the crates down cellar, this recipe is for you. It’s a deeply comforting soup, guaranteed to make you feel like you’re still snuggling at your mother’s breast. Even though the mere thought of simmering and boiling may make your spring-lusting soul cringe, this soup is bound to make you relax, slow down, and take it one muddy day at a time. 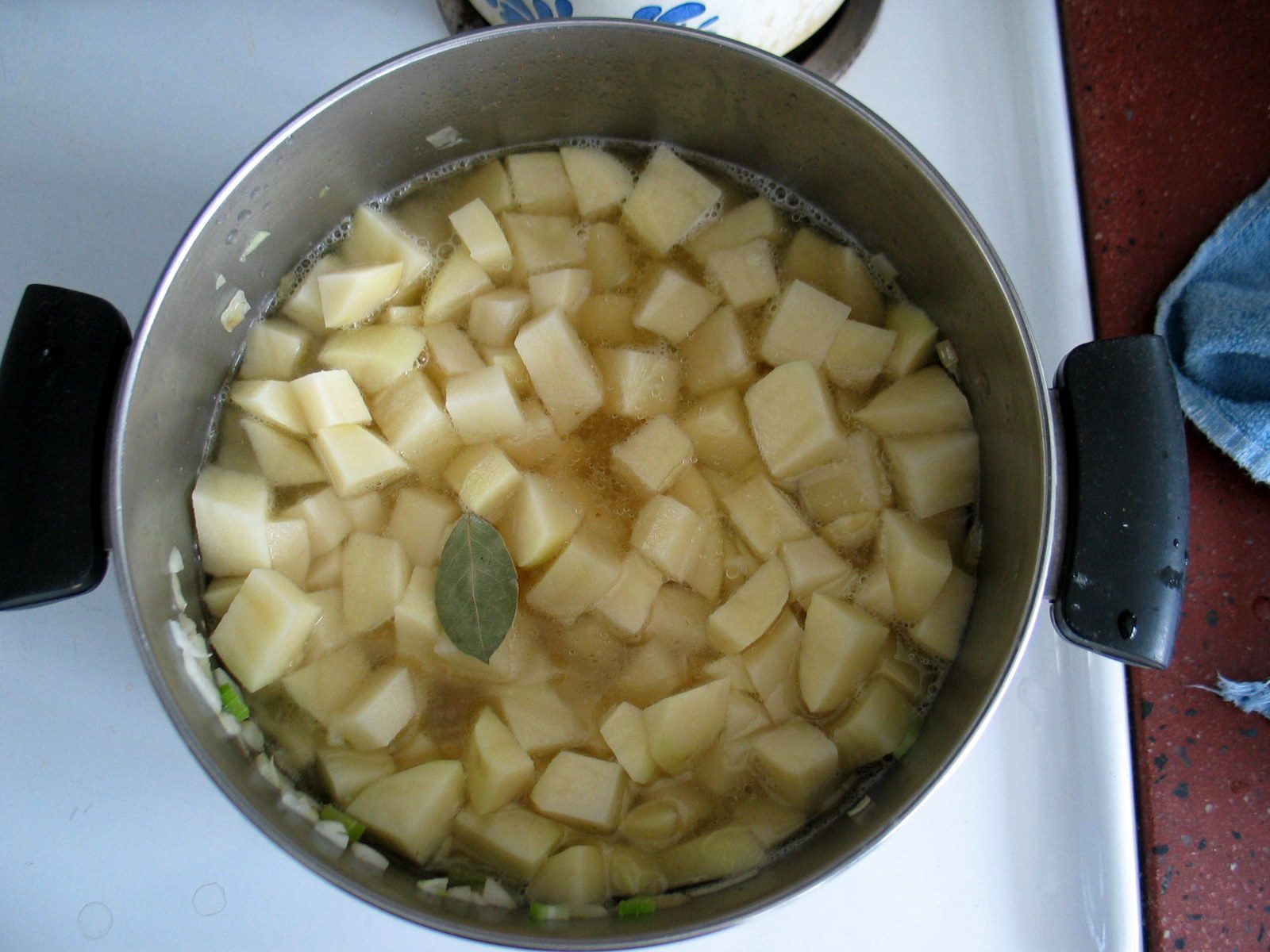 On the other hand, it might make you want to get outside right this very minute and sow even more potatoes than you were originally planning on planting. 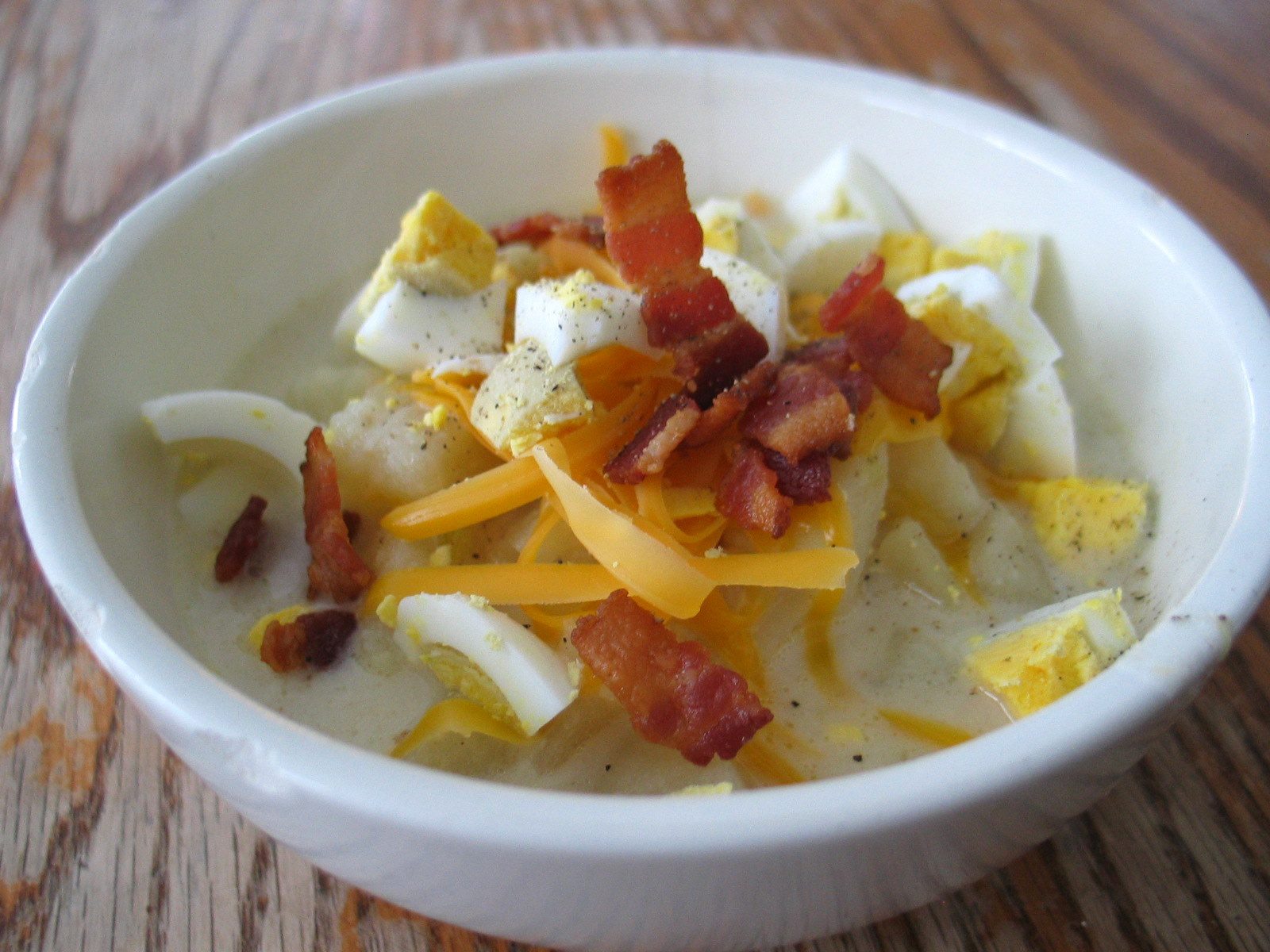 Fry the chopped bacon in a large soup pot till crispy. Remove the bacon pieces and set aside. Drain off all but two tablespoons of the bacon drippings.

Add the onion and celery to the soup pot and saute over medium-high heat for about ten minutes or until they have softened. Add the chopped potatoes, the bay leaf, and the water and simmer till the potatoes are fork tender. Add the salt, pepper, and cream and heat through (do no boil). Remove the bay leaf and taste to correct seasonings.
To serve, ladle the soup into bowls and top each bowl with a diced, boiled egg, some crumbled bacon, and a generous sprinkling of cheese.

About one year ago: my OCD indulgence and a warm winter day. Apparently, what goes around, comes around.