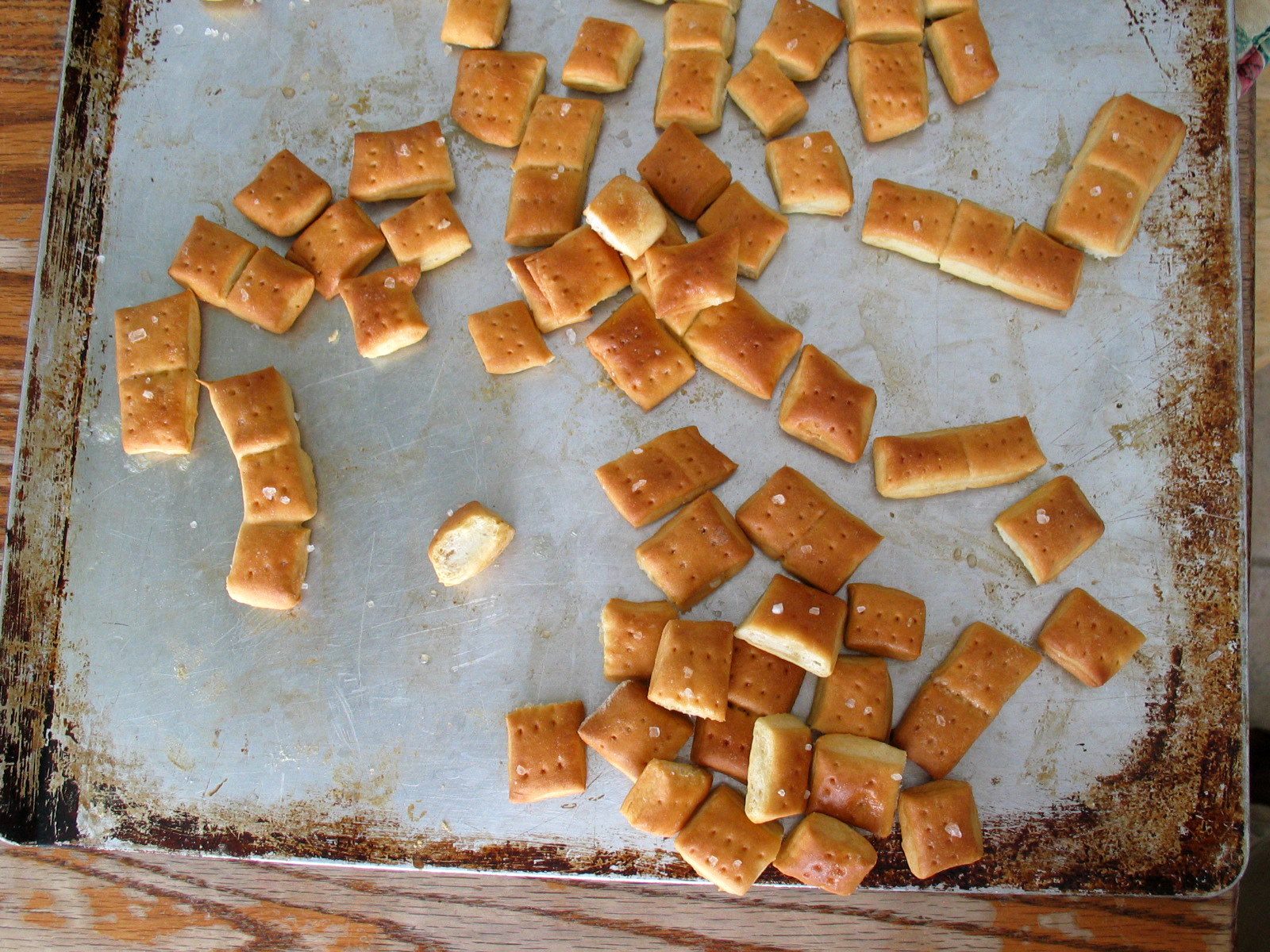 Nearly every night before settling the kids in bed, we read to them. Mr. Handsome corrals the two younger ones and hauls them upstairs to their bed where they lay on either side of him as he reads piles of picture books. As for me, I claim the cozy space in front of the wood stove, on the center cushion of the green sofa. Yo-Yo flops around in the space on my left and Miss Beccaboo nestles up on my right, so close that it feels like she’s trying to fuse her bony shoulder to my rib cage.

I love reading to the older children now that they are able to enjoy books far beyond their reading abilities, books that I enjoy and care about. Our last book was James Herriot’s All Creatures Great and Small. When we finally finished it (it’s an enormously long book!), I was more than ready for a change. I didn’t give any thought to what the next book would be until the next night at bedtime when the kids hopped onto the sofa and looked at me expectantly. Then an idea of a book, one that I had thought of many a time before but each time promptly discarded as being “too old for them” flashed through my mind and I thought, I’m gonna do it! Hot diggity-dog, I think it’s finally time! And then I hit the uppermost button on the ceiling of the glass elevator and we shot up, higher and higher and faster and faster, till we burst through the ceiling and out into open air…

Um, wait. Wrong story. I read that one to them long ago (and more than once), but I declare, the thought of my new grown-up book made me feel like a maternal version of Willy Wonka, all spastic and adventurous and slightly cuckoo.

I ordered the kids to sit tight and sprinted up the stairs and down the hall to my room where I flopped down on the floor and cocked my head sideways to study the shelves of books. When my eyes finally landed on the plain, black hardback, I snatched it up and came thundering back down the stairs, waving it in the air triumphantly. “Lookie here!” I crowed. “I’m going to read you one of the best books of all time! Ooo, I can hardly stand it! I AM SO EXCITED!”

The book in my hand? To Kill A Mockingbird, but of course.

We’ve been reading for a few days now and in last night’s reading Atticus shot the mad dog (is there anything sexier than a scholarly man who, under duress, suddenly whips a gun to his shoulder and—BANG!—nails a rabid dog in the head? Right, I didn’t think so) and Jem went apeshit and slaughtered Mrs. Dubose’s camellias. At a couple different points, the kids, freaked out by the turn of events (Calpurnia pounding on the Radley’s door and yelling “Mad dog comin’!”; Mrs. Dubose, mouth agape, tongue undulating, and eyes unseeing, slowly rocking her head from side to side as she waited for the alarm clock to jangle) huddled close by my side, feet tucked up on the sofa, safely out of reach of the under-the-sofa monsters.

The book is far above their reading level (especially when you consider that Miss Beccaboo isn’t yet reading) but I’m impressed with how much they understand, or at least attempt to understand. These are some pretty big issues we’re delving into. “Why was Calpurnia supposed to go to the Radley’s back door instead of the front?” and “What do you think a ‘morphodite’ is?” (When I explained that it is someone who is both male and female, Yo-Yo said, “Yeah, some people say God is a morphodite. I learned that in Sunday school.” Oh. My. [I love my church.]) “Why do you think the book is titled ‘To Kill a Mockingbird’?” We have discussions about addictions and true strength, about rabies, about bartering and share croppers and the value of education, especially in the early years (according to Jem, you don’t learn anything till the 6th grade anyway).

Then there is the whole issue of Scout asking for someone to “please pass the damn ham” and calling her cousin a “whore lady.” We laugh uproariously at her adventures, but when Miss Beccaboo asked us to pass the ‘damn ham’ at supper (there was no ham in sight) I had to explain that us older people (that would be the four big people at the table) got the joke, but that since the little kids don’t have the same discretionary powers (and that’s a gracious over-estimation of the older two children’s abilities), we’d best keep the joke under wraps.

And of course I’m driving home the point that they should never ever ever, under any condition, use the n-word. Apparently I drove the point home really well because Miss Beccaboo said, “Can’t you just say ‘black people’ when you read? Do you have to use that word? I don’t like it.” I explained that while it’s not a good word to use, it’s central to the book and I needed to use it so that they could more fully understand the story.

We finished Part One last night. Part Two, da-dum, da-dum, is the beginning of the court case. It’s going to involve lots more explaining and some interesting conversations. I can’t wait.

And in the meantime, while my evenings are spent engaging my children in literary, cultural, and social code cracking, I’ve gone and cracked a culinary code, one having to do with—you guessed it—crackers. (When you view the world through the eyes of a sleuth, life seems kind of fun. Everything—crackers, words, math problems, compost, chicken sex—appears to be a great mystery, ones that are quite possibly solvable.) 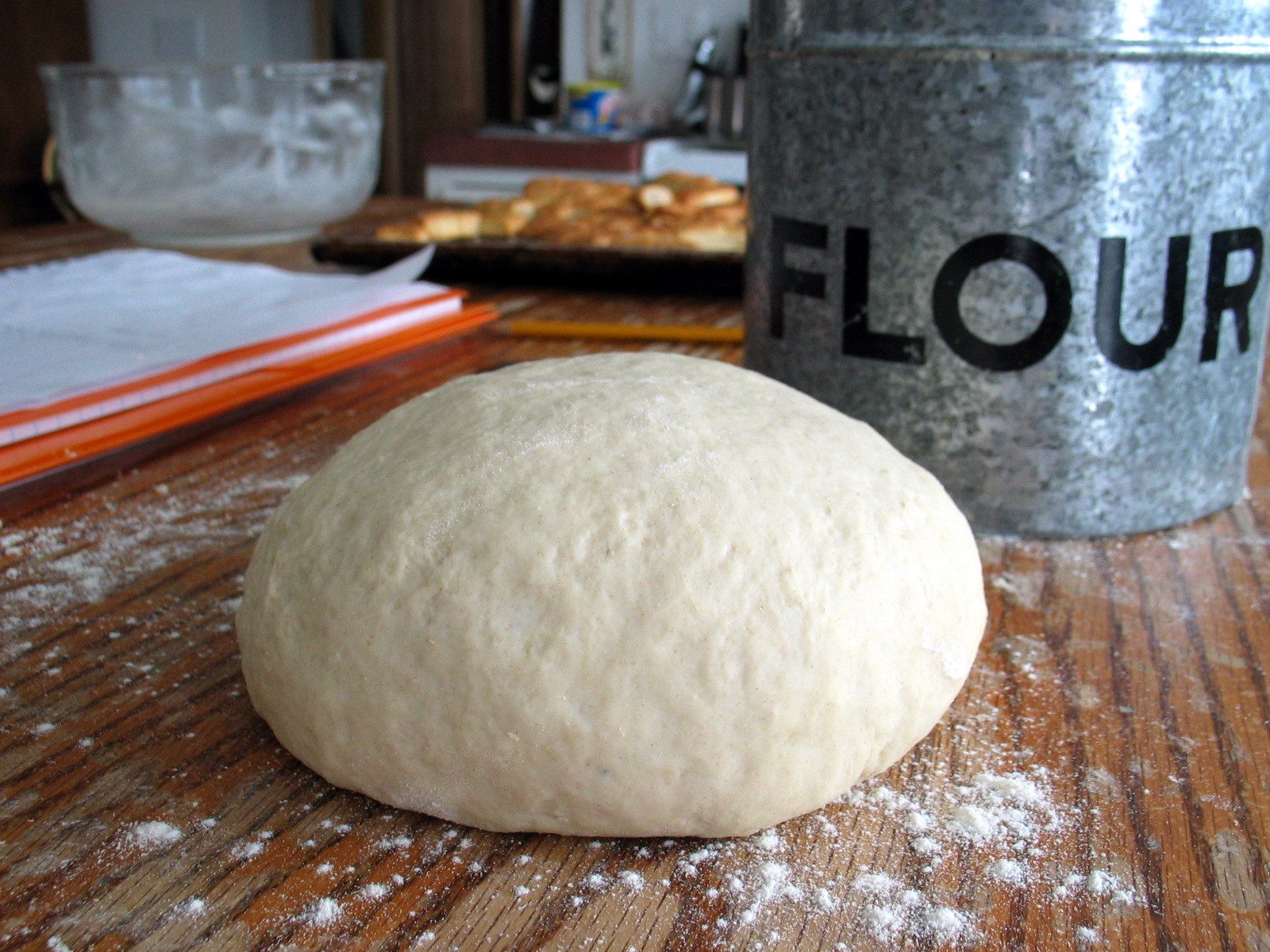 I’ve made crackers many times before. I’ve done wheat thins and graham crackers and twice-baked tasty morsels, but I have never really learned to make a good cracker till this past week.

By “good” cracker, I mean, light-crispy as opposed to tough-crispy. My wheat thins (the graham crackers will be a separate post all together if I write about them [which there is a good chance I won’t, seeing as I don’t have a recipe that I’m head-over-heels with] ) have always been kind of grayish and leathery-hard. Tasty, yes. Nutritious, yes. But they had to be consumed with something else, like hummus or dhal. They weren’t something that you’d want to pick up and munch on for munching’s sake. 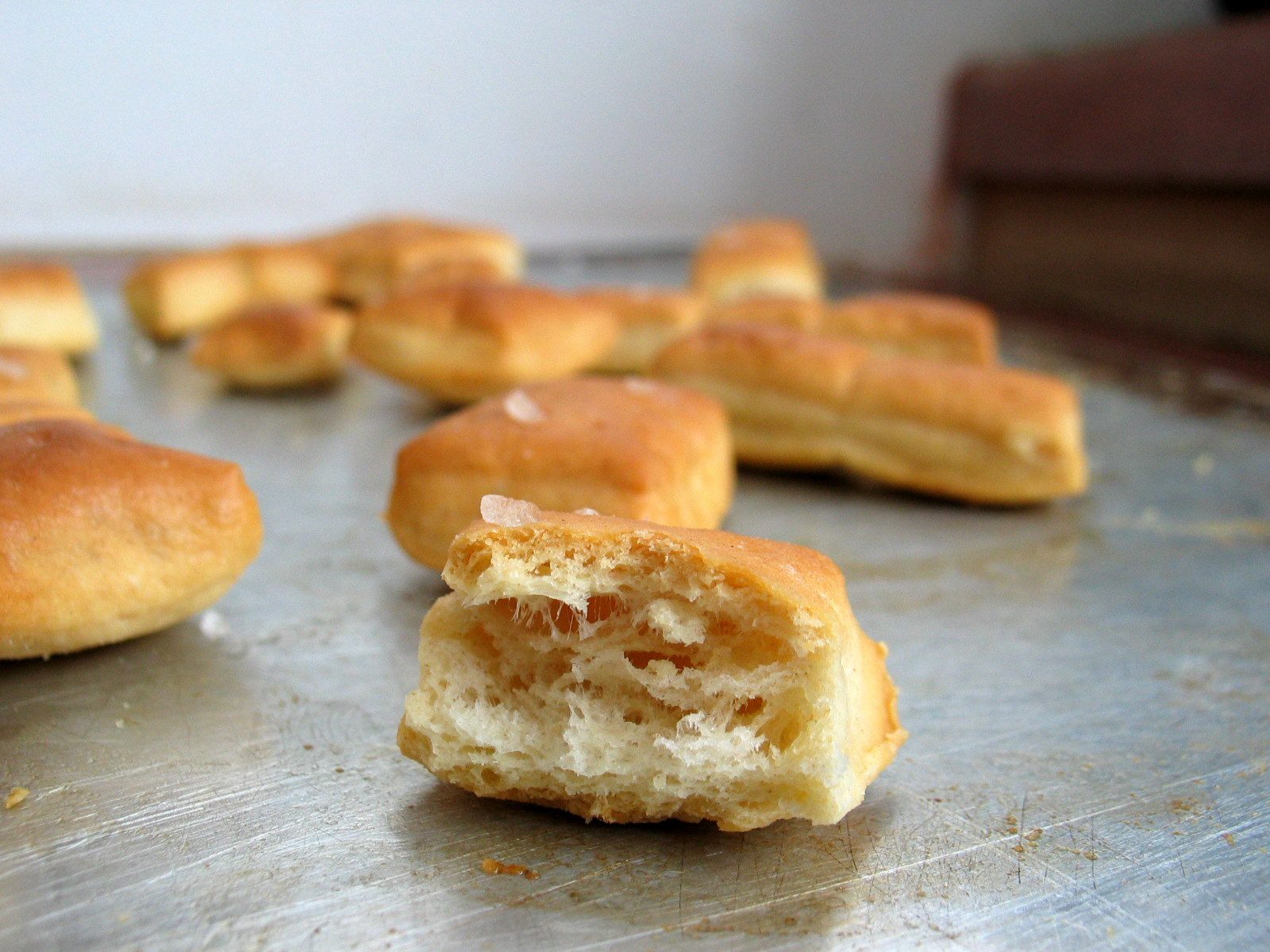 These babies, however, these darling little puffy-crisp squares, have officially blown me out of the realm of bleh crackers and into cracker nirvana, where tender, crunchy, buttery, salty crumbs spill from smiling lips every which way you look. 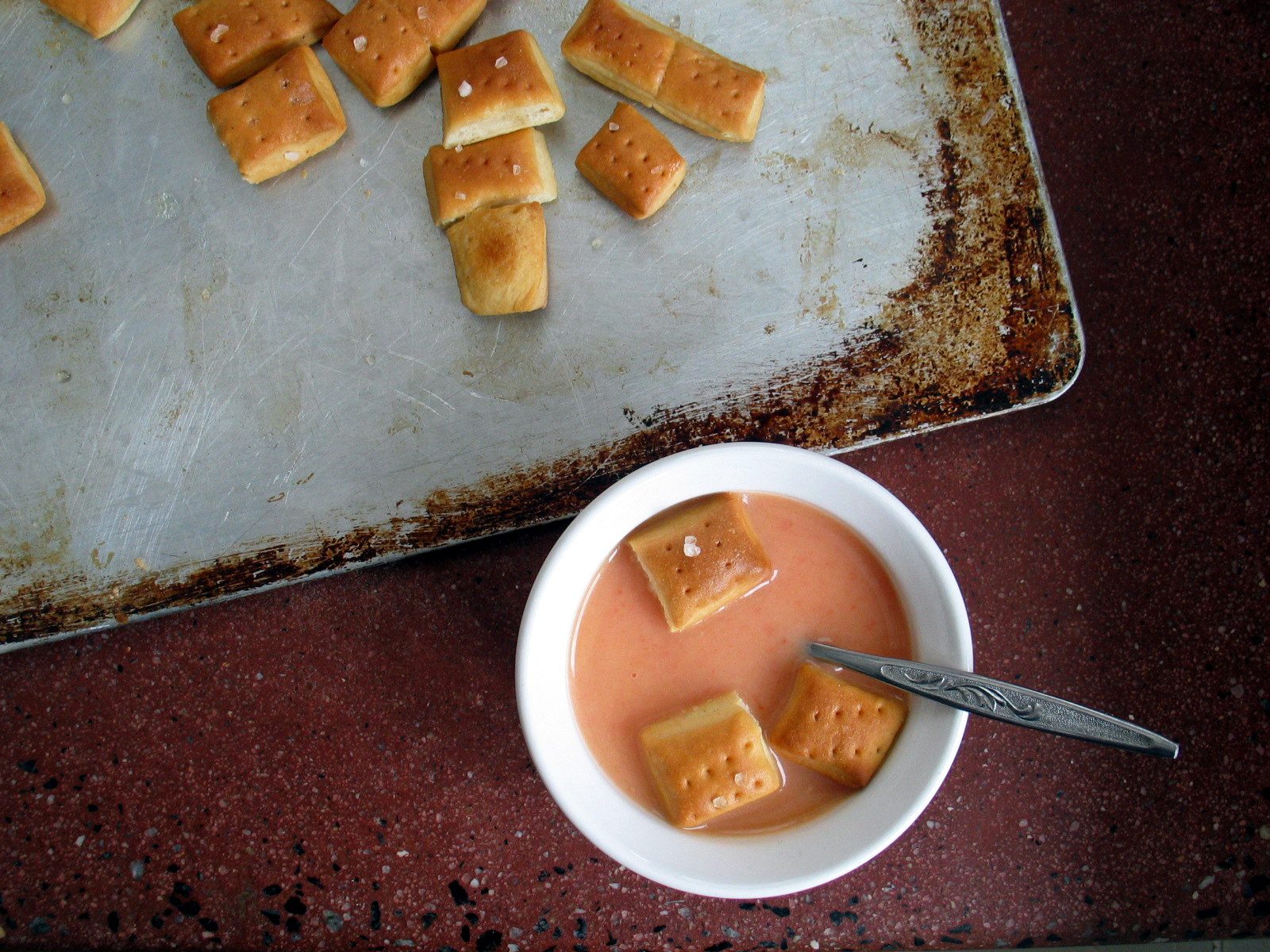 Depending on how you roll out the dough, these crackers can take on a variety of textures and shapes. If you roll them on the thicker side (about 1/8th of an inch) and cut them small, you get puffy, bite-sized crackers that are similar in appearance and texture to oyster crackers. If you roll them thinner (1/16th of an inch) and cut them bigger, you get a flatter cracker that is more along the lines of a saltine—one that you can crumble into a bowl of soup or top with a slice of cheese or schmear of peanut butter.

Of course, like good literature, there are endless variations and interpretations of this cracker. Sesame seeds, poppy seeds, fancy salts, and whole grains are just a few of the ways you could take them. The truth is, the more you play around with them, the greater your understanding of the humble cracker will be. 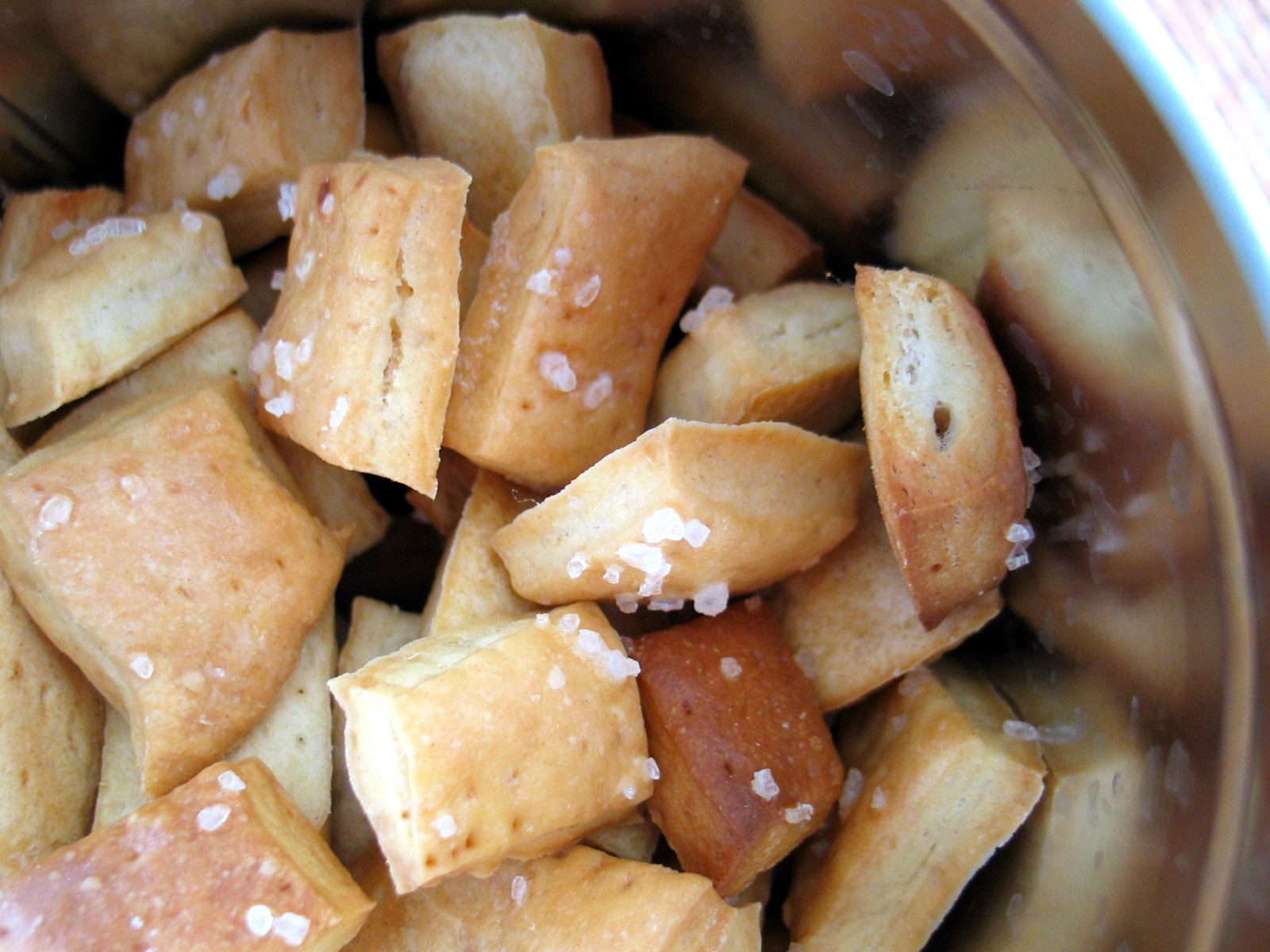 I’m not a fan of veggie shortening, even the trans-fat free kind, but I keep in on hand for the odd recipe. I thought about subbing it out for coconut oil, lard, or butter, but decided against it—I wanted to sample the intended cracker first. However, once I sampled the end results, they were so darn fine that I couldn’t bring myself to make even a single solitary changes the next time around. But, I’ve only made these a couple times so far. I have every intention of making them over and over again, and as I experiment, I will report back here. You do the same, okay?

The directions say to “relax” the finished dough in the refrigerator for 1 to 18 hours. The first time I made the crackers, I let them chill overnight, but the second time, they languished in the fridge for several days before making their way into the oven, with no discernable negative side effects. As a result, I believe this dough is quite forgiving and flexible.

In regards to the matter of salt: sprinkle on a lot. The first time I was too timid with it, but the second time around certain people felt I employed too much (about ½ teaspoon, I think). I, however, thought it was wonderfully salty, so I just told them to be quiet and brush it off if it didn’t suit their fancy. The bottom line? I recommend erring on the side of too much salt rather than too little; the extra salt brushes off easily, but it’s pretty darn near impossible to add it to the finished cracker. You may, however, disagree with me. I won’t hold it against you.

This recipe makes 100 small crackers. It may sound like a lot, but it’s not. They get scarfed down before they’re even properly cooled, so do yourself a favor and double or triple the recipe.

Mix together the first six ingredients (down through the cream of tarter). Using a fork, cut in the vegetable shortening. Stir in the warm water, turn the dough out onto the counter and knead for a minute or two, adding more flour as needed (I used about an extra half cup), until the dough is silky smooth. Place the dough in a buttered bowl, one that is big enough to hold double the amount of dough (it will rise and then deflate), cover with plastic wrap, and place the bowl in the refrigerator for 1 hour and up to several days (see note above).

When you are ready to bake the crackers, remove the dough from the fridge and turn it out onto a lightly floured counter. Roll the dough into a rectangle, about 6″ by 18″ and 1/8″ thick. Fold the dough over as you would a business letter (making three layers of dough), transfer the dough to a greased cookie sheet, and roll the dough out to the same proportions again.

Prick the dough all over with a fork, every quarter inch or so, spritz the dough lightly with water, and sprinkle the dough with coarse salt (see note above). Using a pizza cutter, cut the dough into squares, making them as big or as small as you like. (I made mine about one inch square, give or take an inch.)

Remove the crackers from the oven and immediately brush with the melted butter. When they are completely cooled, store in an airtight container at room temperature. (I imagine they freeze well, too, though I haven’t had a chance to try that yet.)

I am submitting this recipe to yeastspottings.

About one year ago: Fire-safe.