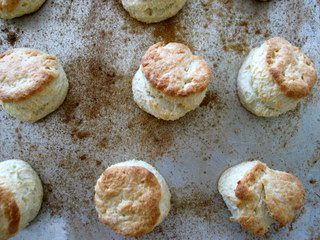 The children are outside cavorting in God’s white, cold, windy, big world, and I’m inside doing one, or all, or a combination, of the following: twiddling my thumbs, checking email, baking biscuits, pacing, taking pictures, making business phone calls, and writing. It’s hard for me to settle into a groove when my kids are playing so nicely. I feel like I need to do something important to fully appreciate the blessed peace, but since I’m not sure exactly what that important thing would be, I fritter away the precious moments thinking about what would be the best way to spend it. Follow? No, I didn’t think so.

The other reason I have such trouble settling down is because at any minute (LIKE RIGHT NOW) the doorknob will rattle and a kid will come stomping in and demand something of me. Loudly. So whatever I choose to do has to be something interruptable. (And yes, spell check, that is a word.)

So I’m making and photographing and (soon will be) tasting biscuits. I figured (after I started them) that they were an all-around good activity to get into because if the kids get hungry, then I can just hand them a brown paper bag filled with piping hot biscuits and send them off on their merry way, thus buying me more time to write about the bag’s contents…which would be biscuits, in case you’re having trouble following.

Okay, now I’ve shipped out some buttered biscuits, fielded another phone call, and I’m almost out of time. Let’s get down to business. 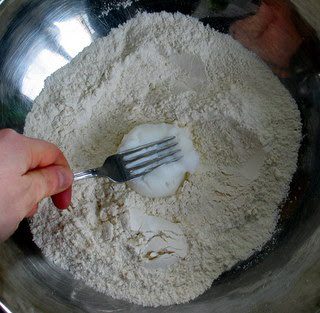 I don’t make biscuits all that often. They involve last-minute work, something I don’t need while in the midst of The Arsenic Hour (when everyone is falling apart at the seams and you seriously consider sprinkling some arsenic in their food), and often by the time I’ve finished pulling together the main dish and a couple veggie sides, I’m ready to ditch the bread side all together, or else just slice up a loaf of sourdough if it’s absolutely necessary to have another starch (and it usually isn’t—I was raised by a mother who thought it appalling to serve both spaghetti and bread sticks). 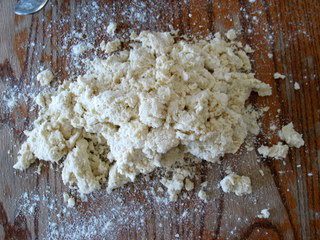 But there is something quaint and comforting about a hot biscuit. Light and tender and made just for that moment. Because of the work required, biscuits aren’t an afterthought, but rather an actual thought-out gift, made all the more special because they aren’t a central part of the meal. 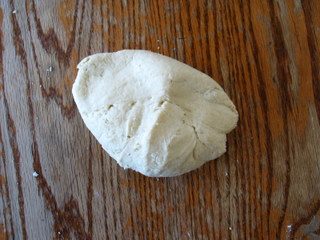 So what does it say about my gracious hosting skills that I preassembled biscuits for our company dinner last week and then forgot to serve them? I don’t think it says anything actually, except that I am an airhead. Even while I was groaning over my ditzy-ness, I knew we were okay food-wise, seeing as we had a triple batch of Indian chicken and mounds of brown rice, green beans, applesauce, pickled beets, and chocolate-dipped pistachio shortbread for supper. I guess you could say the biscuits weren’t exactly crucial. 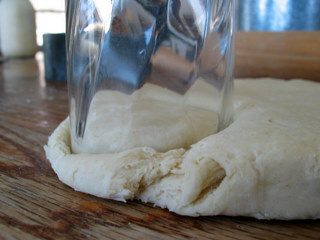 I made the forgotten biscuits for lunch a couple days later. My parents were visiting and I served all the leftovers from the former company dinner (and we’re still eating the Indian chicken leftovers). I enjoyed the biscuits, but they didn’t rise as high as I had hoped. 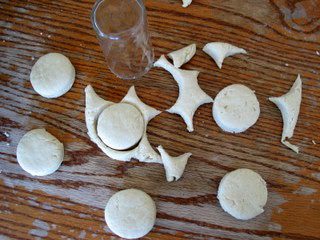 I made biscuits again for supper last night. These rose sky-high (perhaps because the oven was hotter), dragging my droopy spirits right up along with them. Throughout the rest of the evening, whenever the word “biscuit” floated through my brain, I had happy thoughts. In fact, I couldn’t wait to get the kids to bed so I could have one of the leftovers. 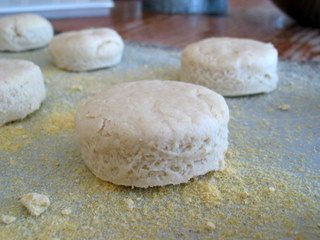 There were still two biscuits when I went to bed and I told Mr. Handsome in no uncertain terms that he was not allowed, under any conditions whatsoever, to touch those biscuits in the morning. They were for my breakfast. And my first thought upon waking this morning? Biscuits and coffee for breakfast! Whoo-hoo! 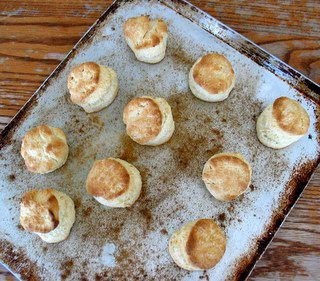 I am officially obsessed. 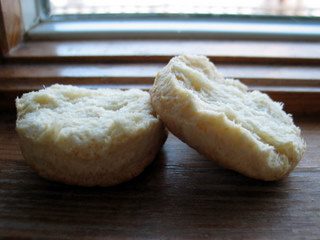 You know how leftover quick breads often seem to turn dry and tasteless after a day or two? Well, these biscuits don’t seen to have that problem (though they’ve only sat around for about twelve hours, max, so I can’t say I know this to be actually true). Even twelve hours after being pulled from the oven, they are still light and flaky, tender on the inside and slightly crispy around the edges. I’m kind of crazy about them. 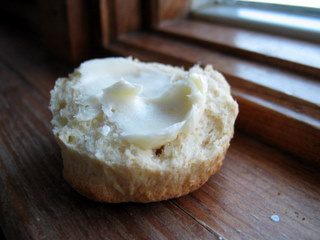 As for the biscuits I made this morning, it appears that they were trying to do jumping jacks in the oven. The hot, hot air made them leap high and then freeze, slightly slumping over to one side. 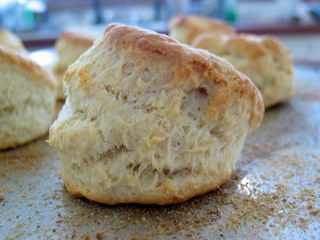 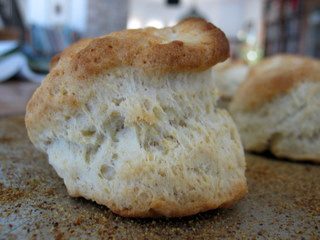 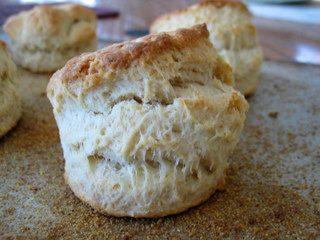 Forget what I said about not being a biscuit lover. I didn’t know what I was talking about. And now I do. I am, now and forevermore, a biscuit devotee, buff, afficionado, fan, etc, etc, etc. 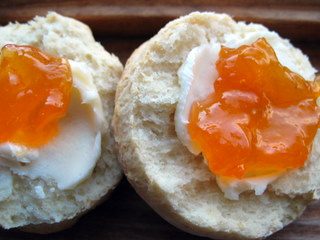 A couple notes about the ingredients:
1. There is no sugar in these biscuits, so for those of you who are abstaining from processed sweeteners for lent, eat up. Warning: eat one of these biscuits spread with butter and drizzled with honey and you’ll feel as guilty as sin.
2. Lard. I use lard. I love lard. Lard is light and lovely and ethereal. But, if you’d rather not use lard, use butter or solid vegetable shortening. (But lard is better.)
3. The recipe calls for milk, but I’ve been using some soured raw cream that I found in my freezer. Do what you’d like, but I’m convinced that the cream makes the biscuits even better.

Mix together the flour, salt, and baking powder. Using a fork, cut in the lard. Add the cream and stir to combine. The dough will be dry and crumbly. Turn the dough out onto the table and knead briefly, just enough to bring it all together. Roll, or pat out, the dough till it’s about ½ inch thick. Using a biscuit cutter or a glass, cut out the biscuits. (Important: cut straight down through and come back up again without twisting the glass, as twisting the glass will smear the edges and perhaps inhibit their sky-high rising inclinations.) Gather up the dough scraps and re-roll and cut, till all the bits have been used up (but be gentle—don’t overwork the dough).

Place the biscuits on a greased baking sheet that has been lightly sprinkled with cornmeal and bake at 450 degrees for 10-12 minutes.

Yield: 8-12 biscuits, depending on the thickness of the dough and the size of your biscuit cutter.

About one year ago: Dark Chocolate Cake with Coconut Milk.