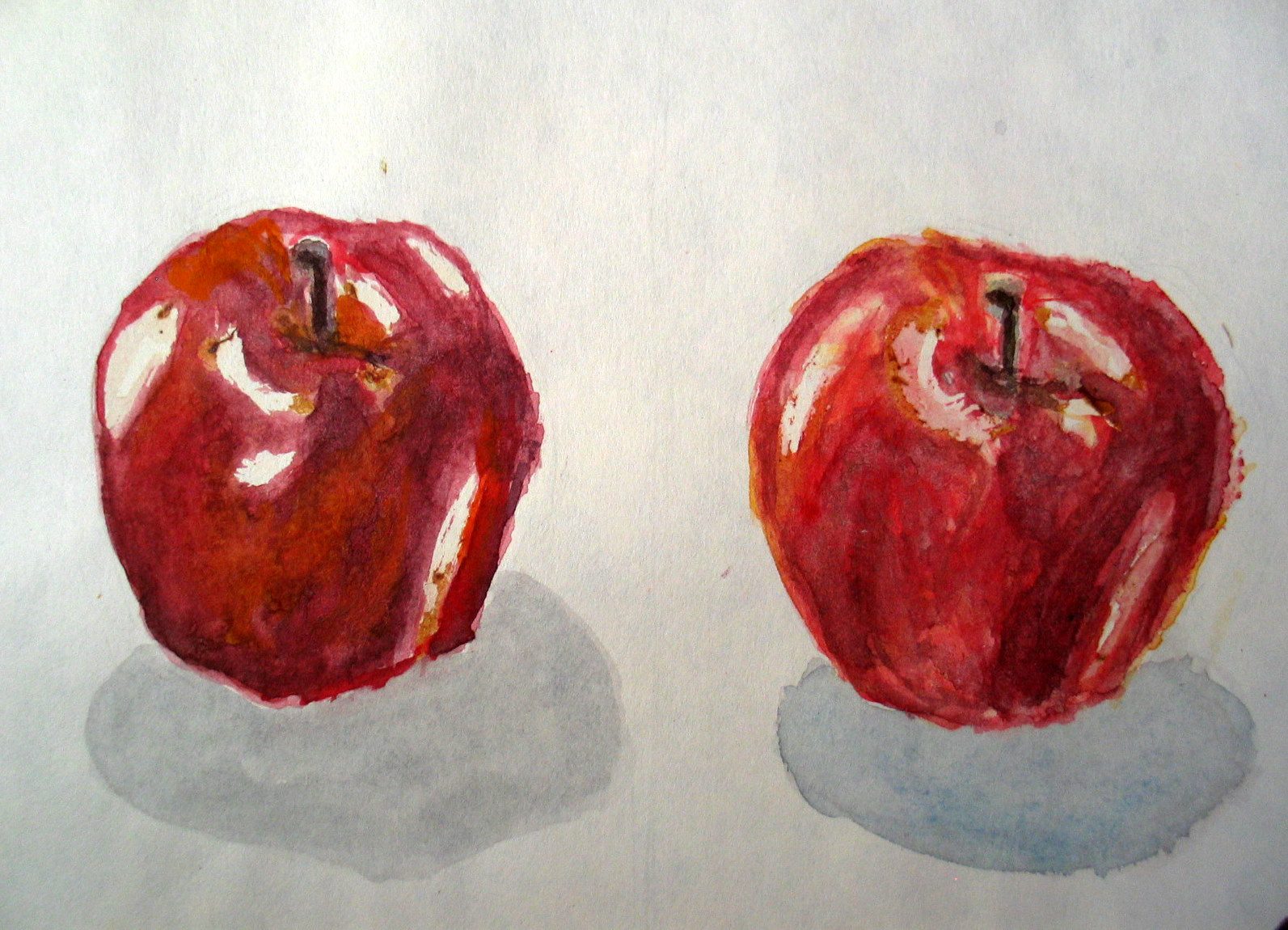 I took two years of art class in high school. My instructor was grumpy man with a dry sense of humor who drilled us on technique like there was no tomorrow. The first year of art class we learned perspective. There was one perspective… 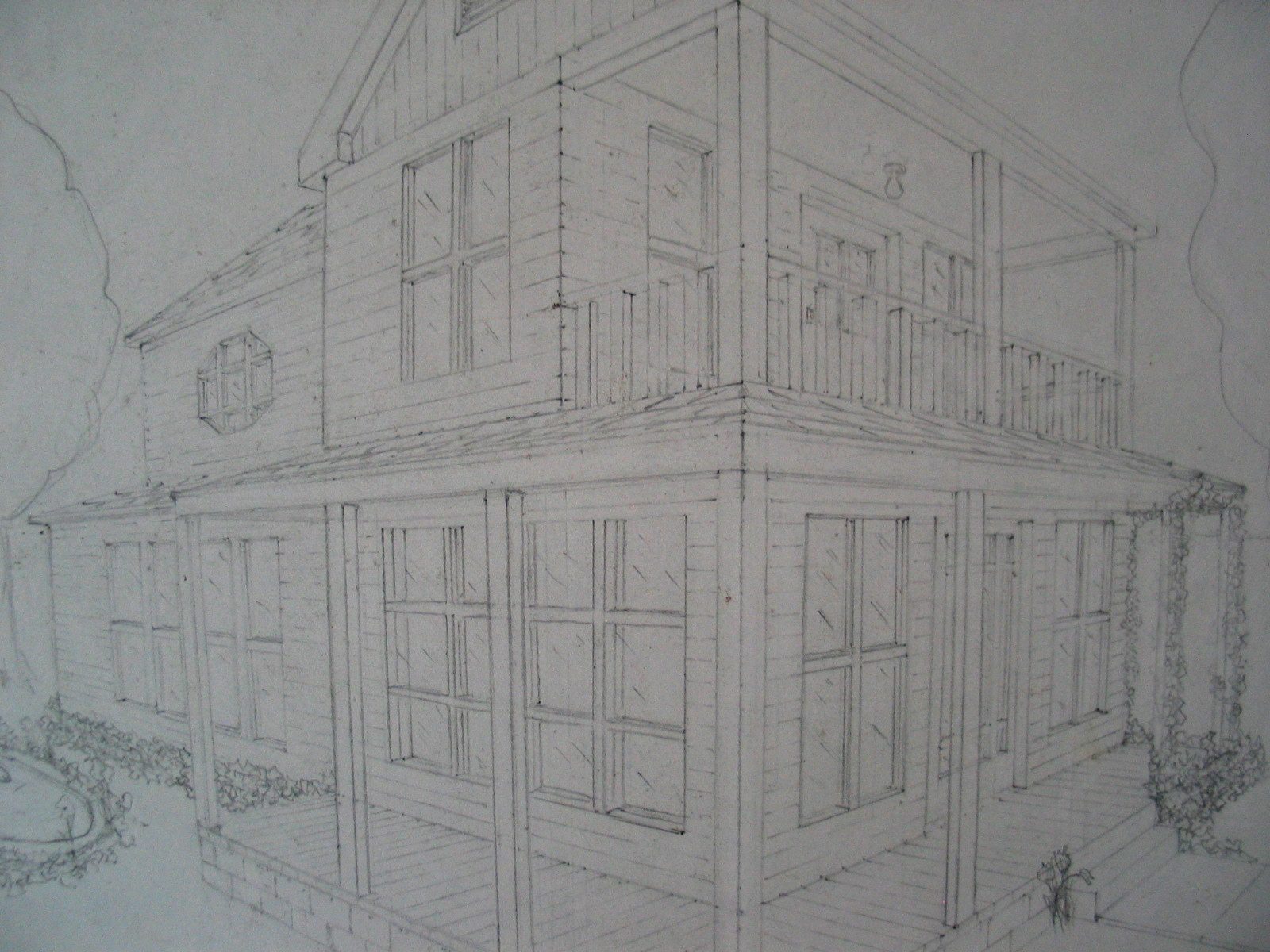 And then there was another… 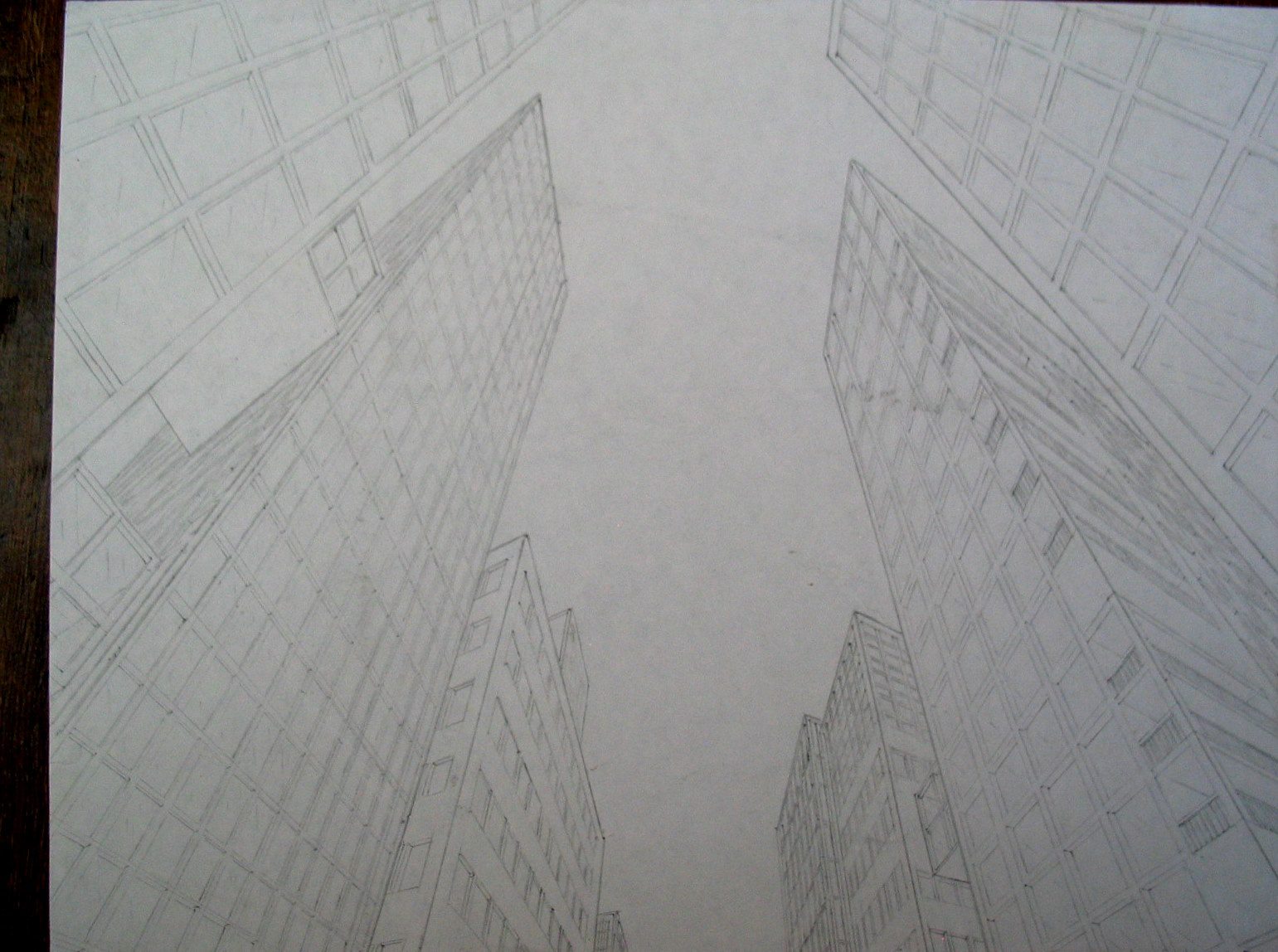 And then there was yet another… 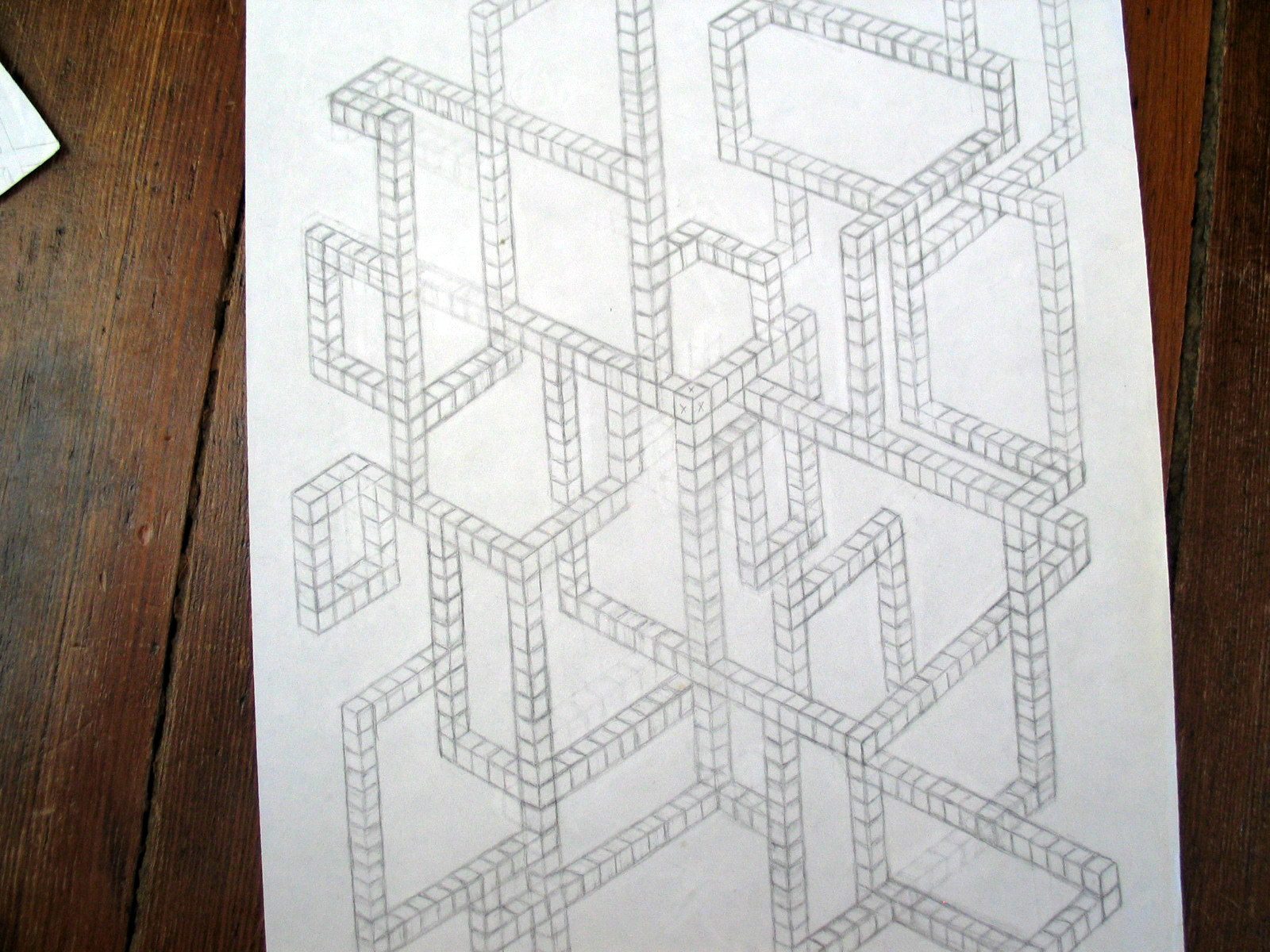 And when he tired of teaching perspective, he started in on the shading. 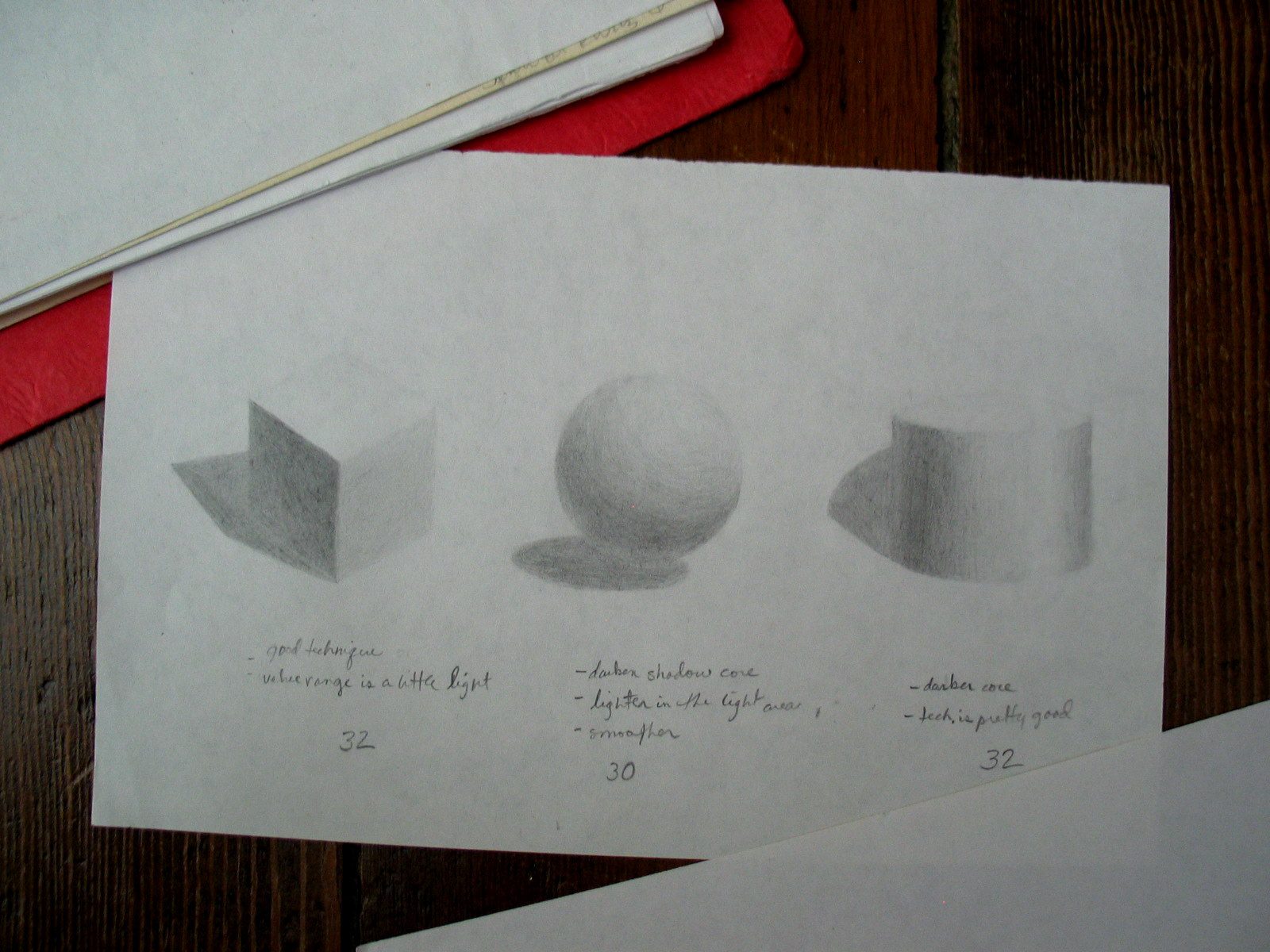 There were still lifes, too, with multi-sided glass bottles. He was mean. 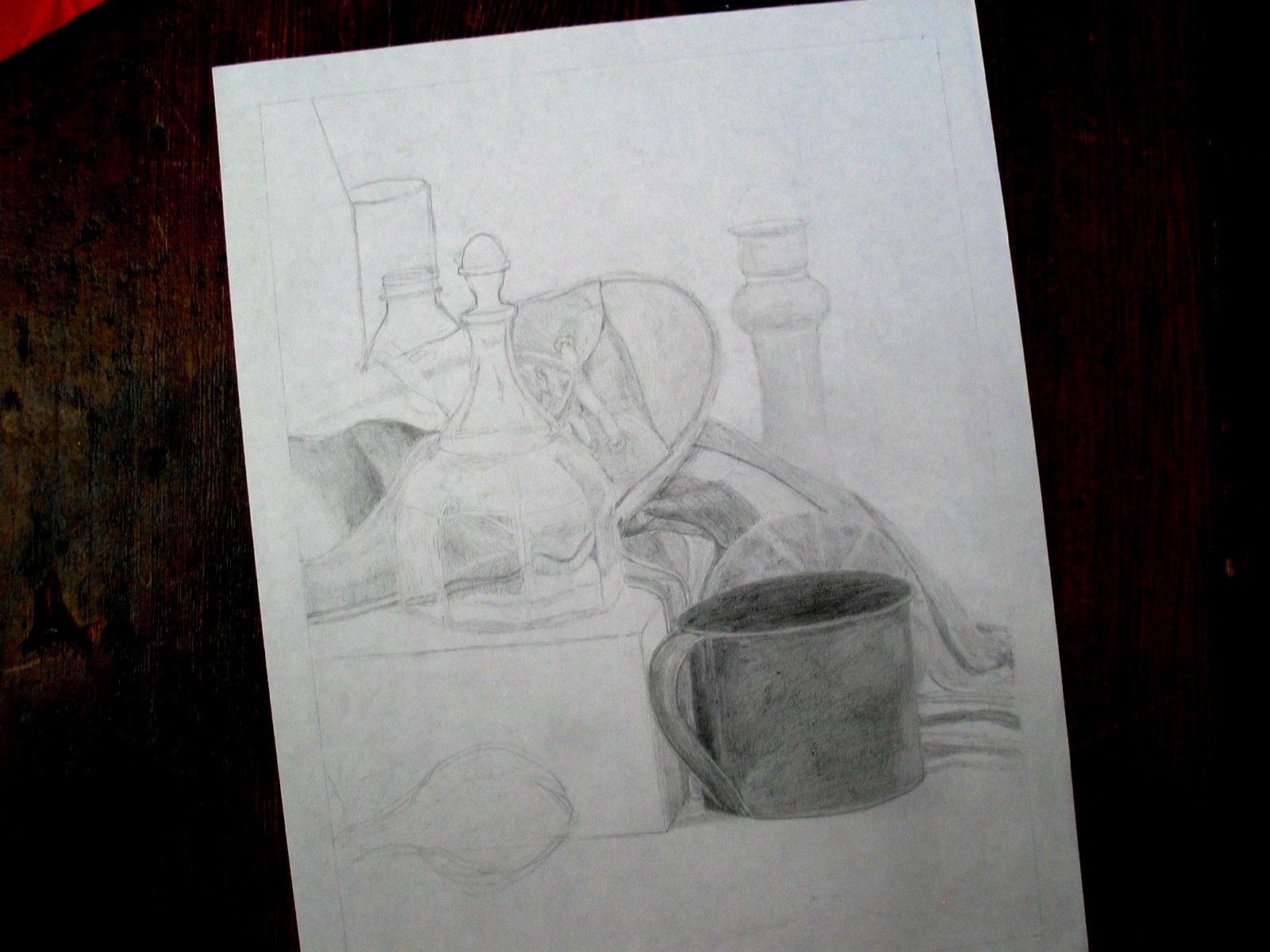 Because I didn’t take art until I was a junior, that meant that I was a senior when I took Art II. (Look at me! I can do math!) I was bummed about that (once I caught on to how the math added up) because I discovered I loved art class, and I wished I could’ve taken all four years. Alas, oil, sculpture, and water colors were not to be my lot in life. (Maybe this is why I am forever mixing oil and water and turning the end result into sweet sculptures?) 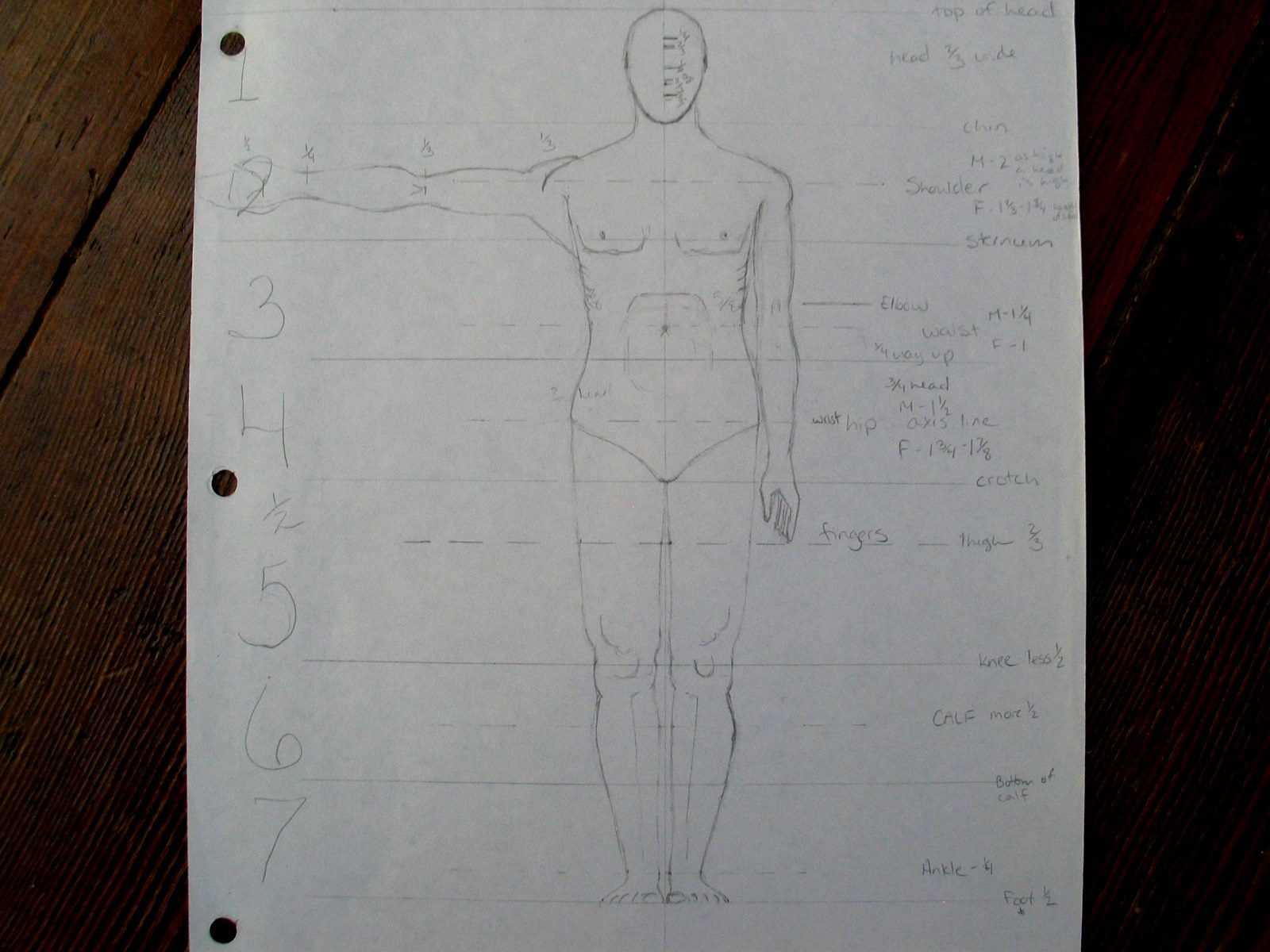 But I wasn’t the only slow learner—there was another senior by the name of Brian who was in my same situation, and because we were high-and-mighty seniors with inflexible schedules, we ended up taking the class during Mr. Art Teacher’s free period. As a result, it was more of an independent study, but Mr. Art Teacher never let us forget that we were cutting in on his free period, and he made us suffer for it, too. To teach us the proportions of the human body, he had us sketch each other over and over and over again. I drew Brian bending over, Brian reaching up, Brian doing leg lifts, Brian doing back bends, Brian sitting with his legs crossed, Brian doing a split, Brian swimming, Brian running, Brian spazzing out. 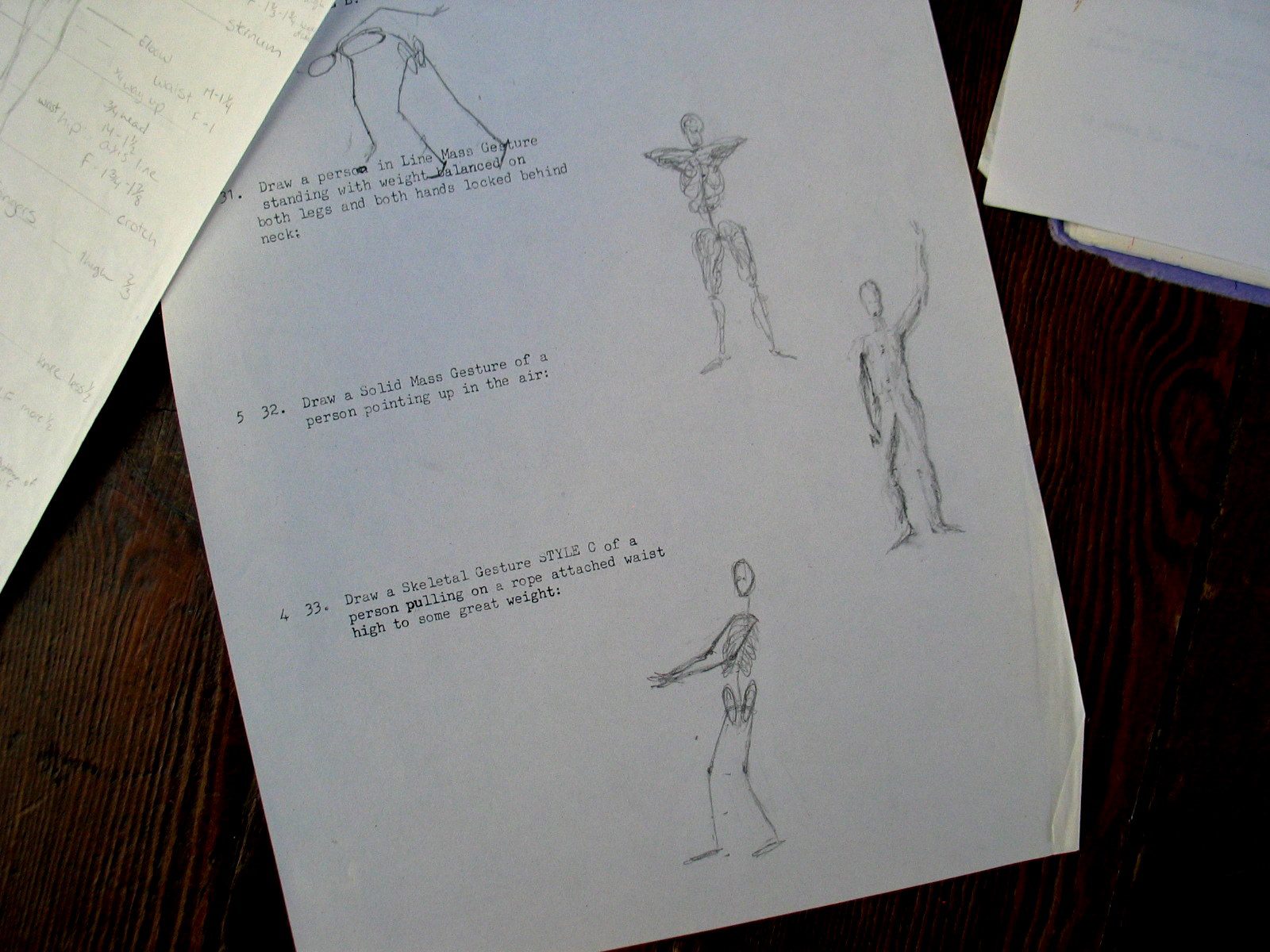 We also learned the proportions of the head, and then we utilized different techniques—pencil point, stippling, cross-hatching—to draw faces. 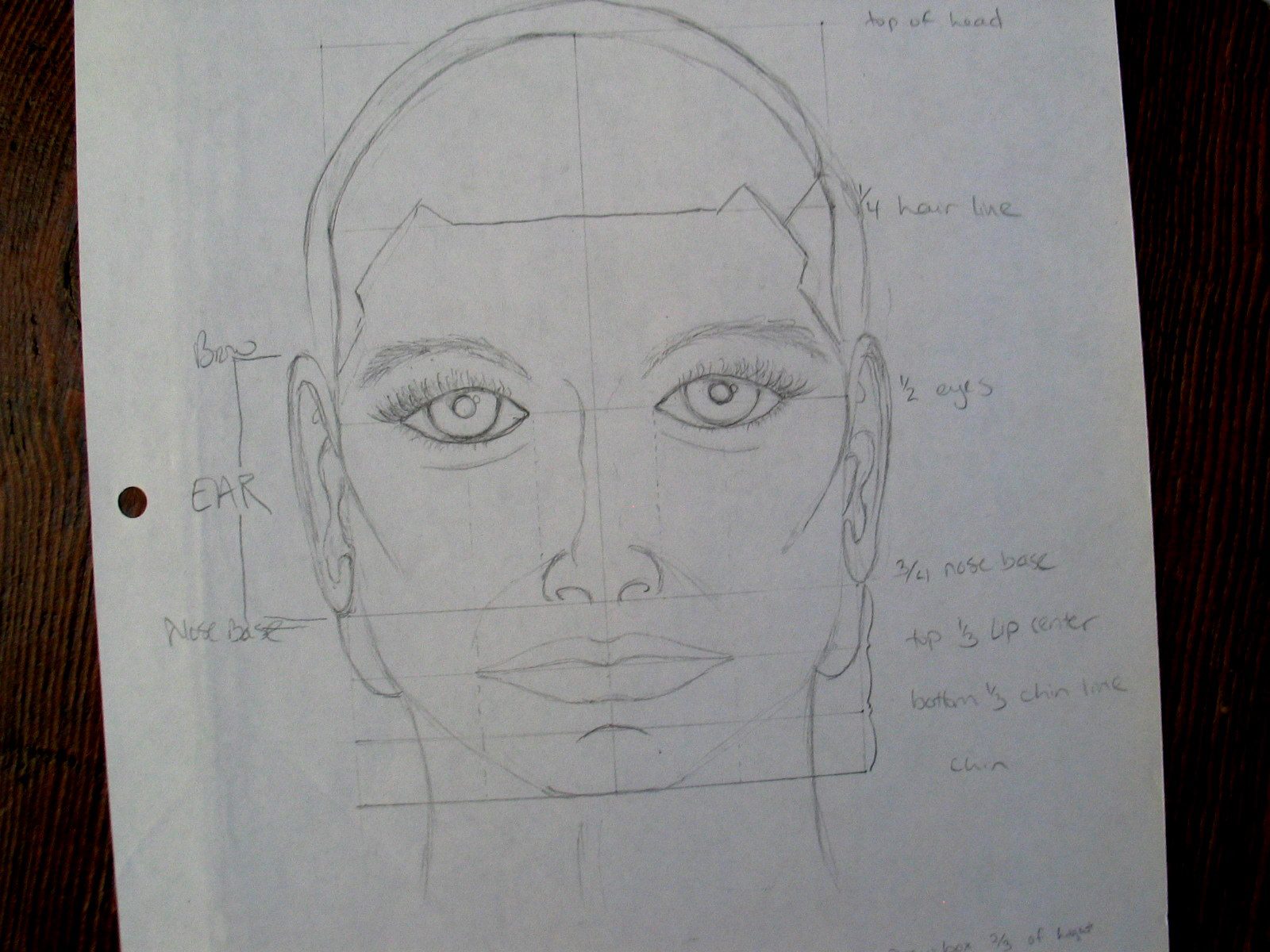 Pencil point was fun, but very tedious. Do you recognize these eyes? 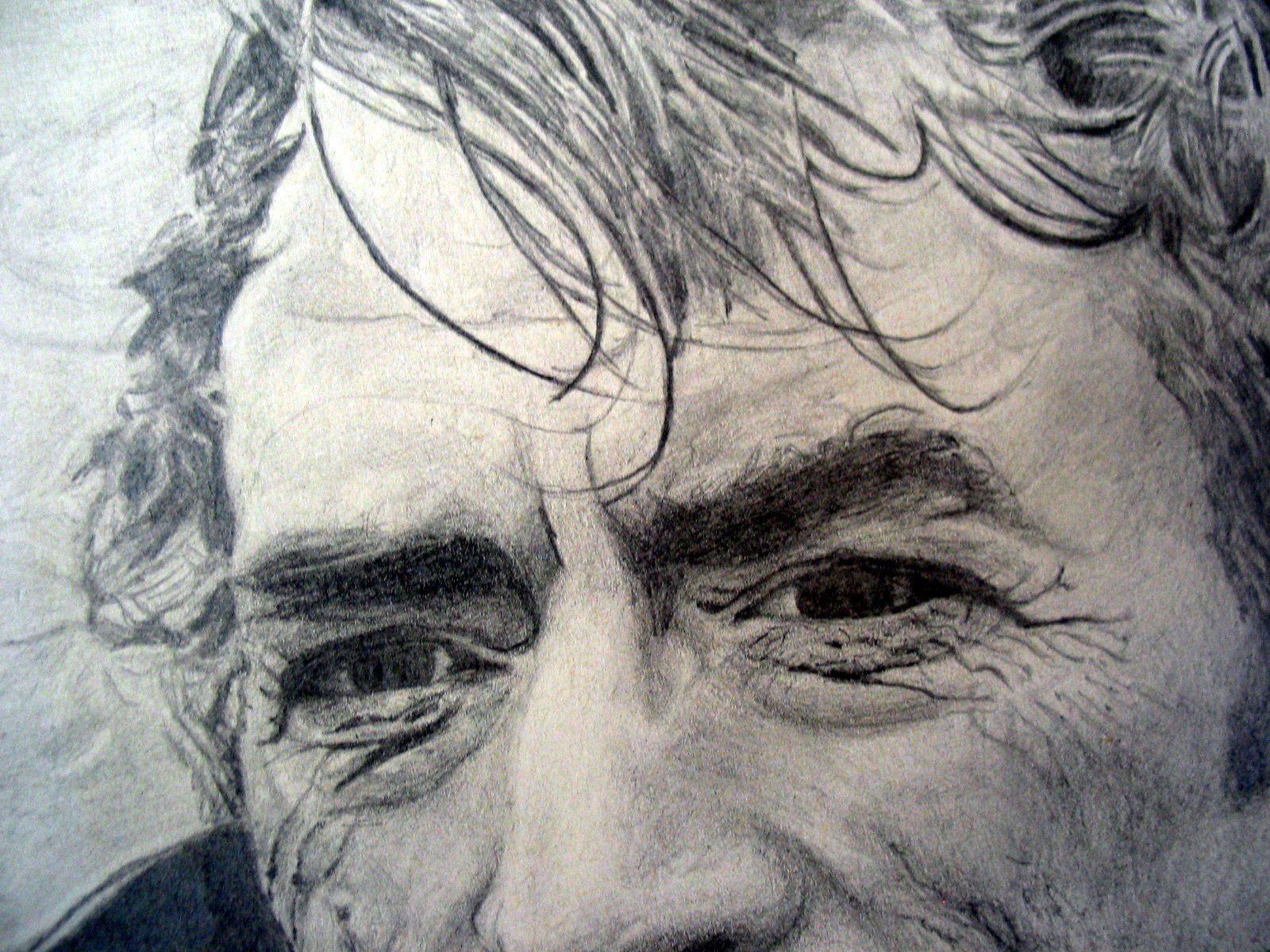 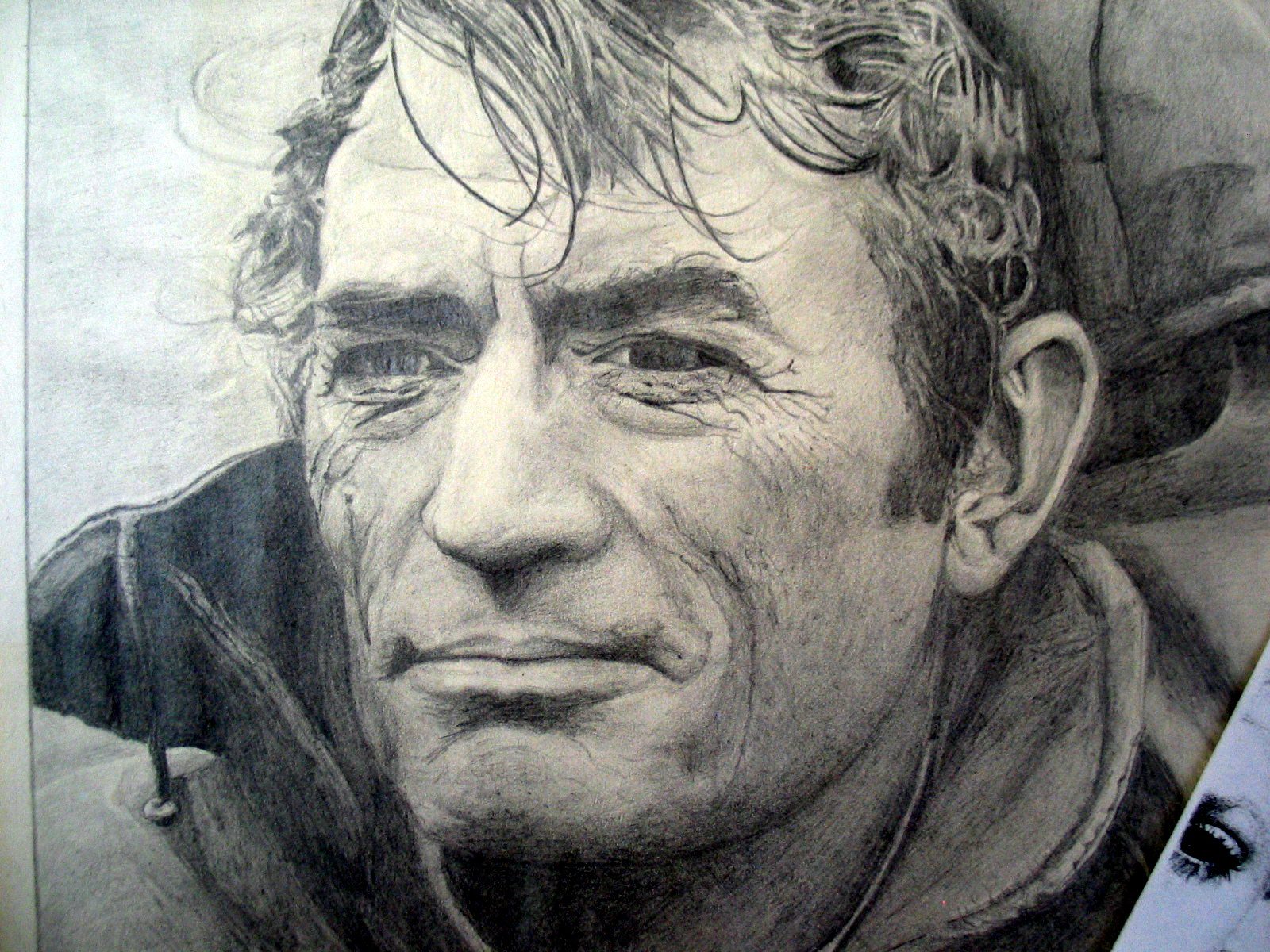 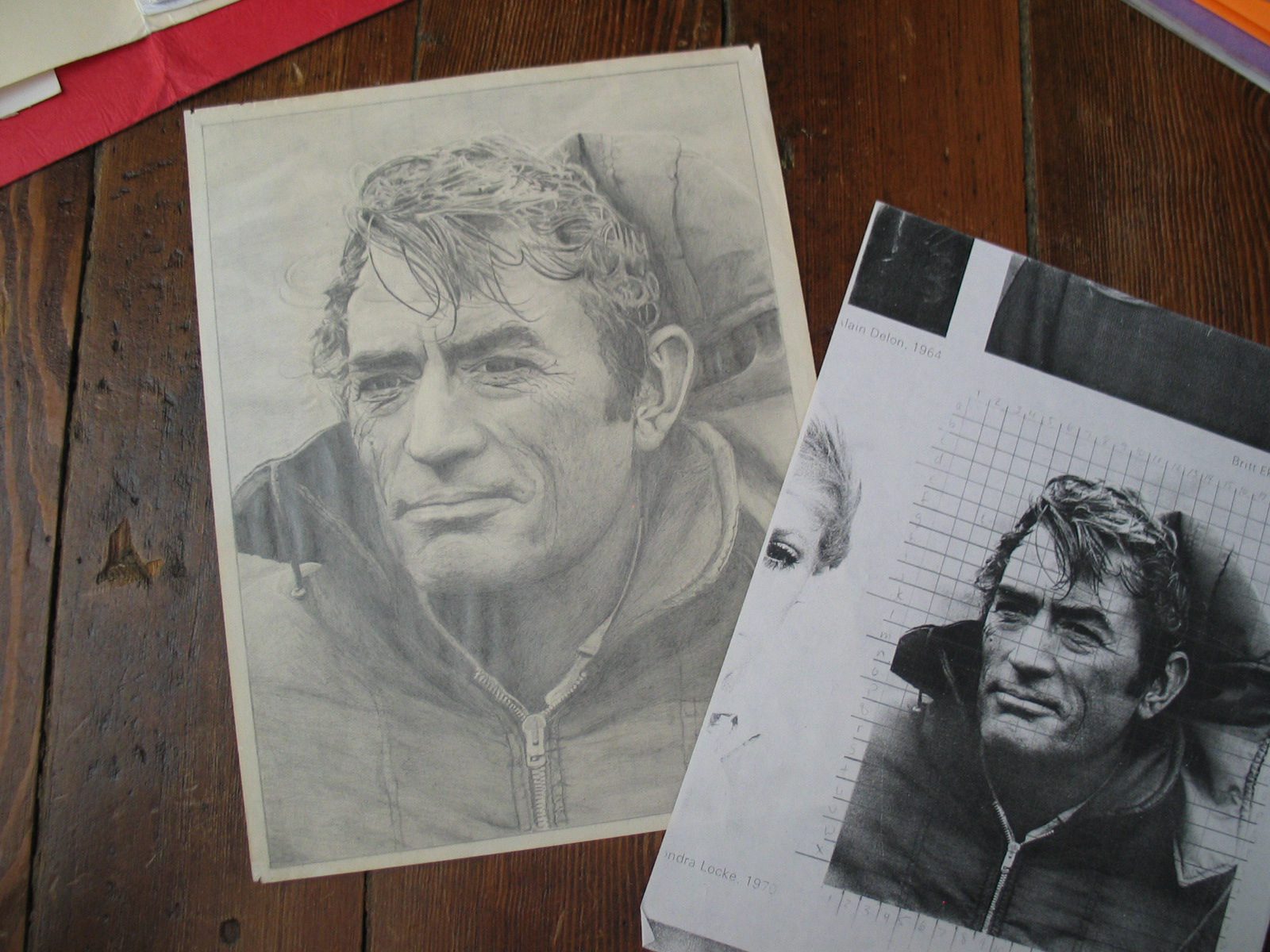 When my brother was in art class, a few years after me, he drew a picture of the two of us and then gave it to me for a Christmas present. 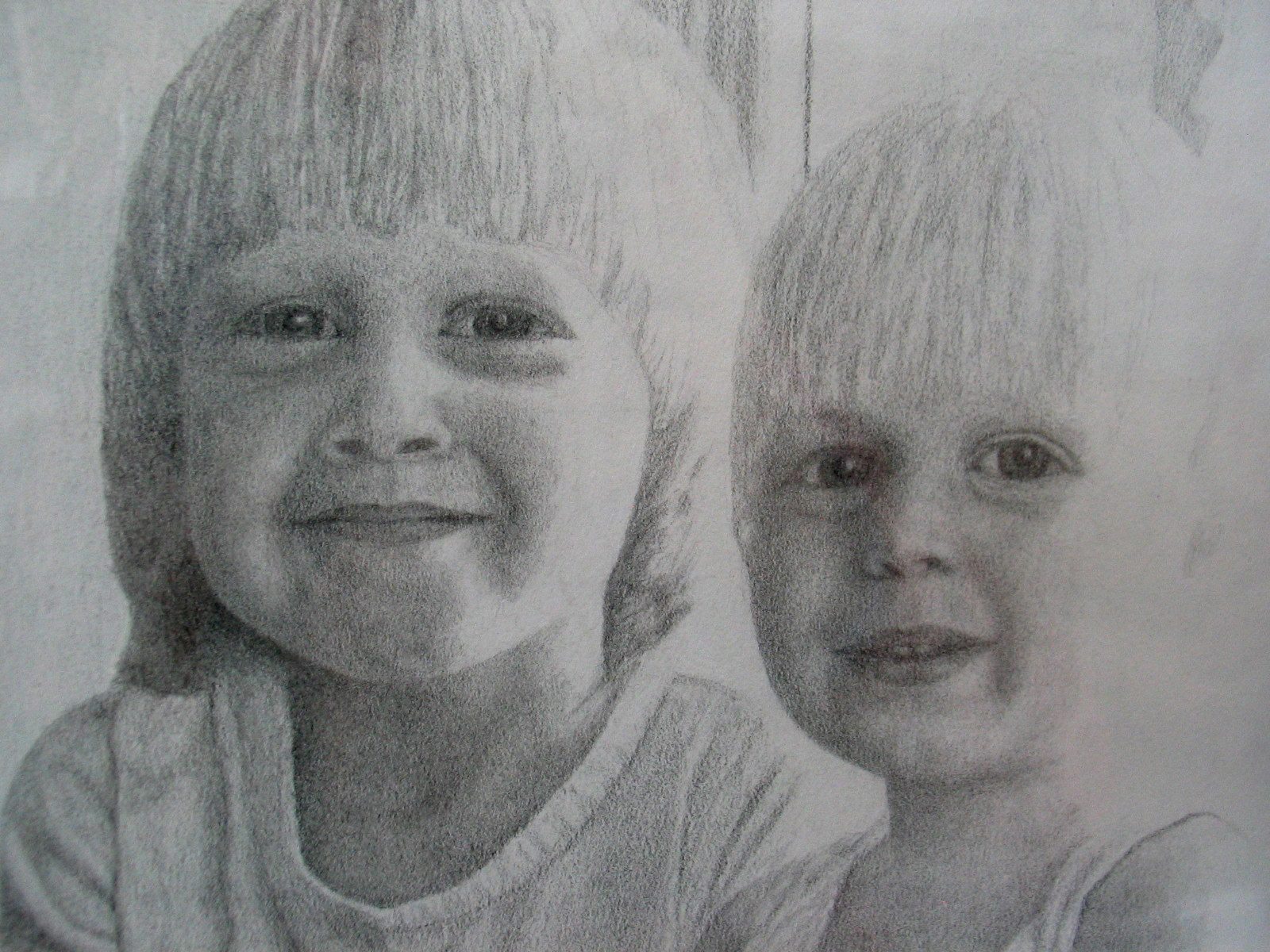 I was—and am—thrilled. I never give away my art because I do so little of it and because it takes so incredibly long to complete a picture. It now hangs above my sofa, right under a picture of another little boy. 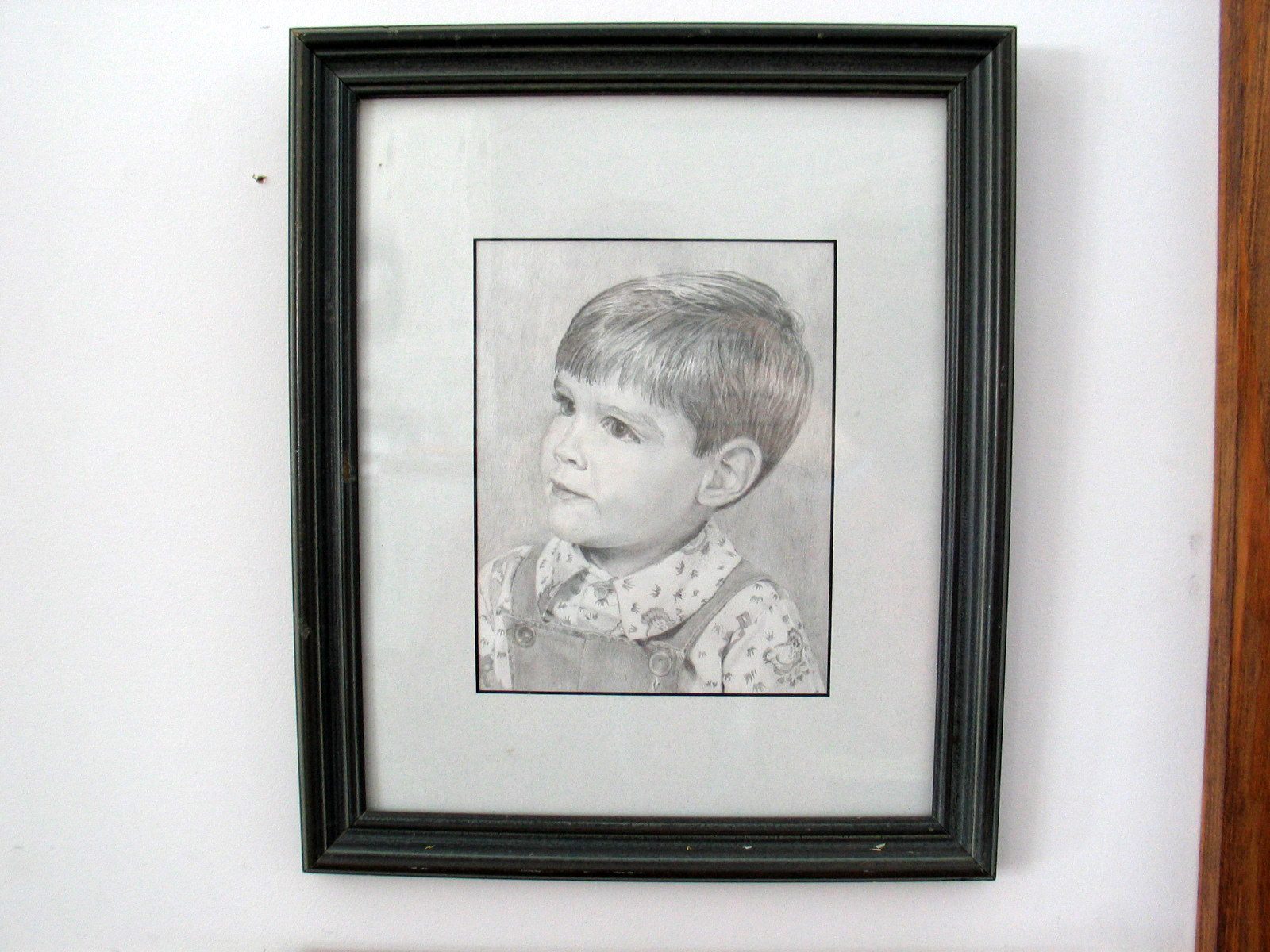 Can you guess who this little boy is? 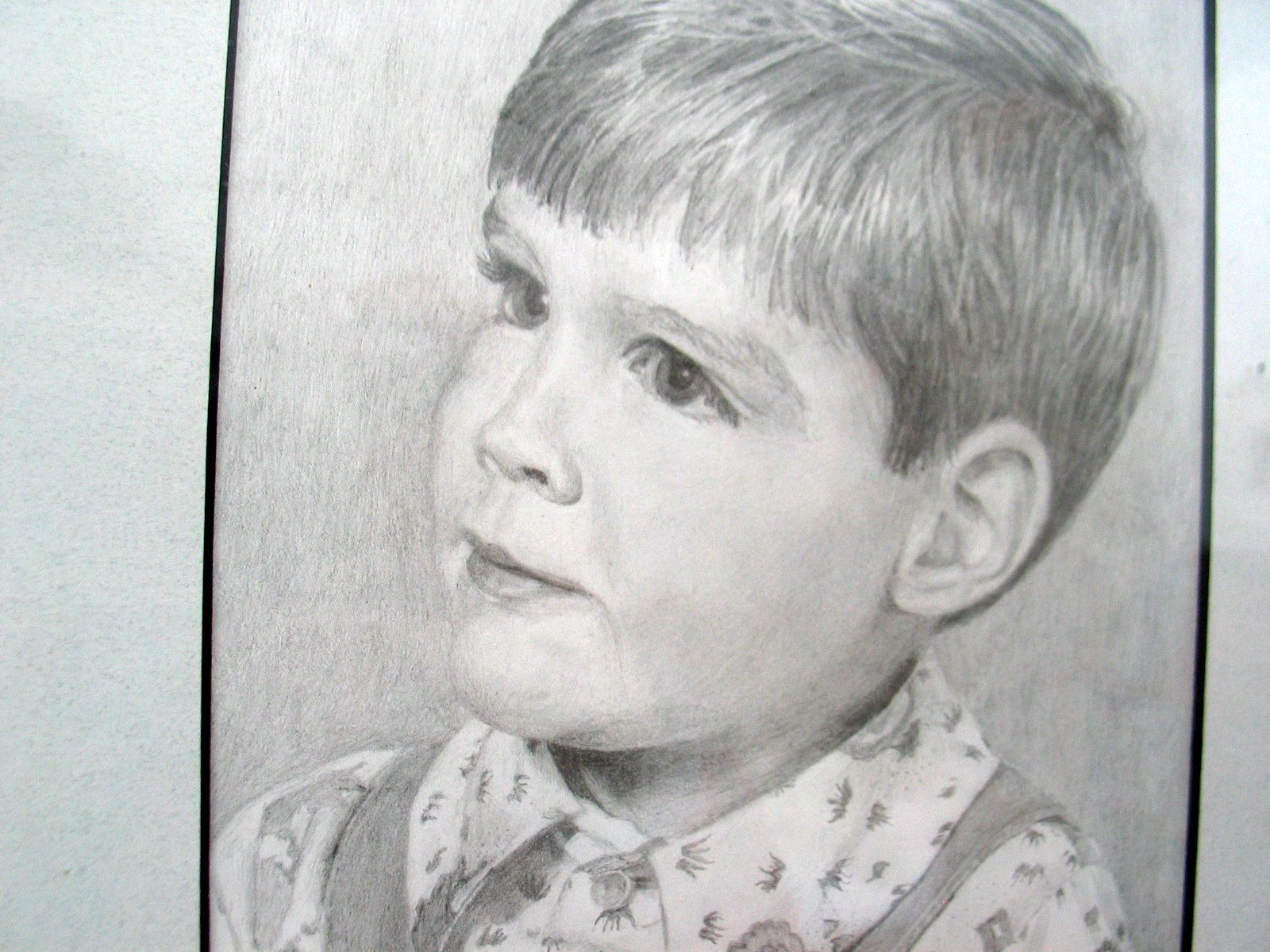 Yep, it’s Mr. Handsome, back before he had earned the Mister prefix. It appears he always had the handsome part down.

I drew the picture while we were dating. The Grand Matriarch gave me the original to work from and kept my secret for the many months that I worked on it. It was to be a Christmas present, but I didn’t get it done in time, so it turned into a Valentine Day’s gift. But by that time, I had decided that I wanted to break up with him (not because of the drawing). So I hitched a ride with a friend up to his home place in New York over Valentine’s Day weekend, gave him the picture, and then told him our relationship was over. I cried all the way back to Virginia. 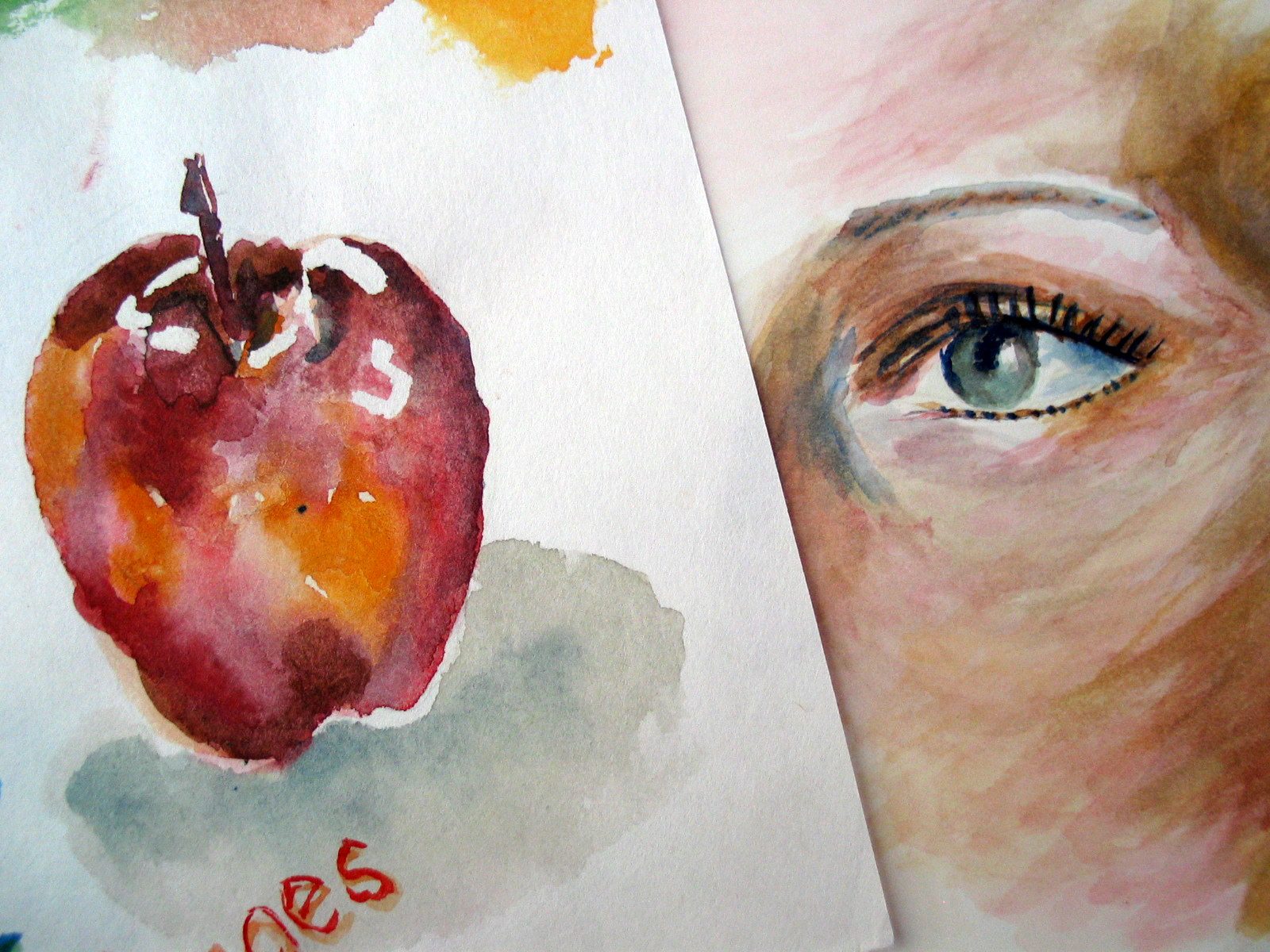 Mr. Handsome’s sister has water colors, so one afternoon back before she was my sis-in-law, I took them for a spin, and had way too much fun. And then I got even madder at myself for not taking full advantage of my public education.

Oh, you want to know why I was breaking up with him? Well see, I didn’t think he listened to me very well. He never asked me questions; he didn’t pry into my personal life like all my girlfriends did. He was rather aloof and cool, and I didn’t feel nurtured enough.

But he called me the next day and reported he had already read a good chunk of two different books (recommended by his older sister, bless her heart) about communication and how men and women relate. He asked me questions. He was attentive. I agreed, relieved to the tips of my grief-stricken toes, to give the relationship another shot. Six months later we tied the knot. (And then we fought for an entire year, but that’s too tedious to delve into right now. I’m supposed to be talking about art.) 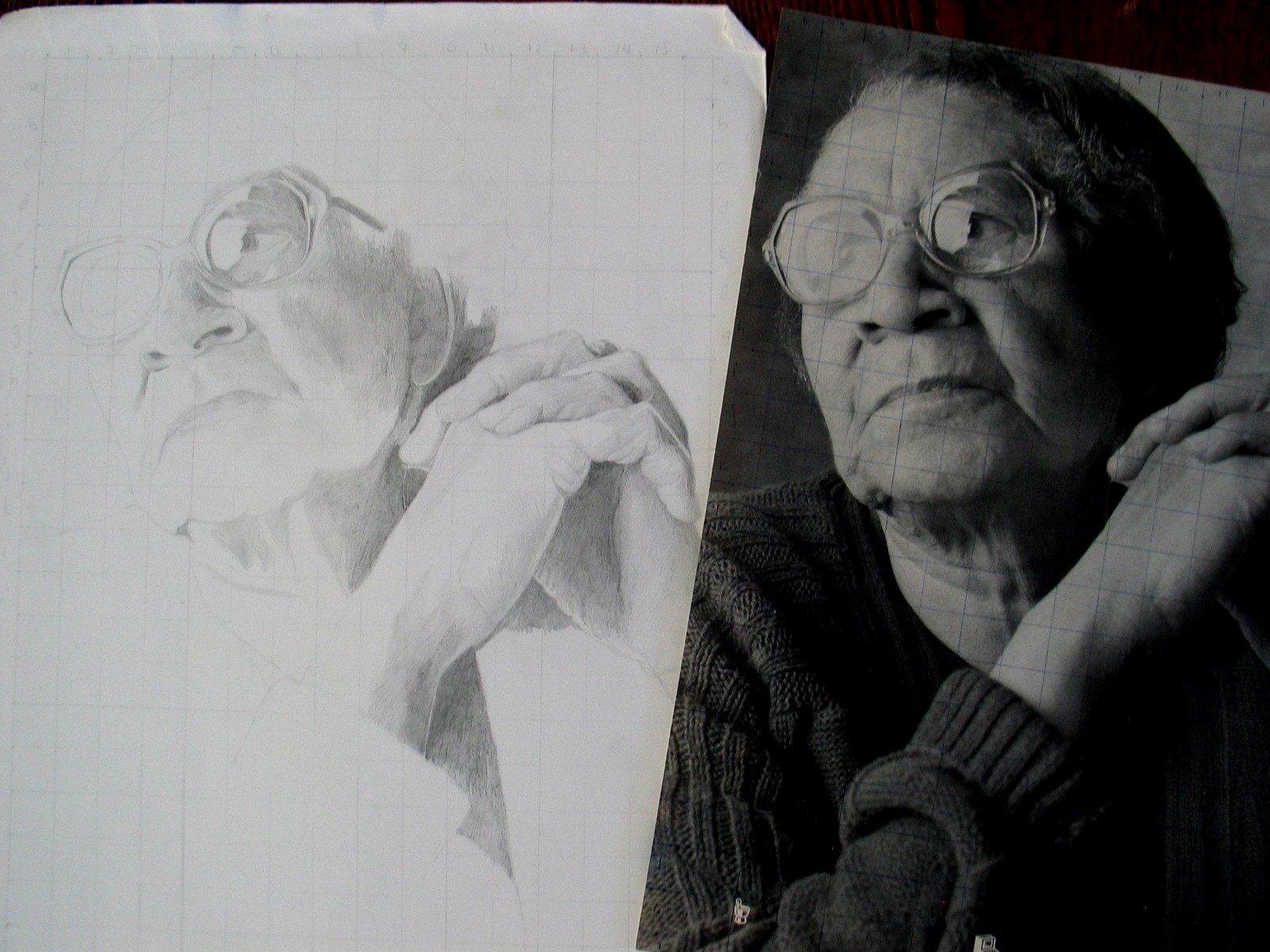 I started a few other pencil point drawings after that, or maybe it was before—I don’t remember. 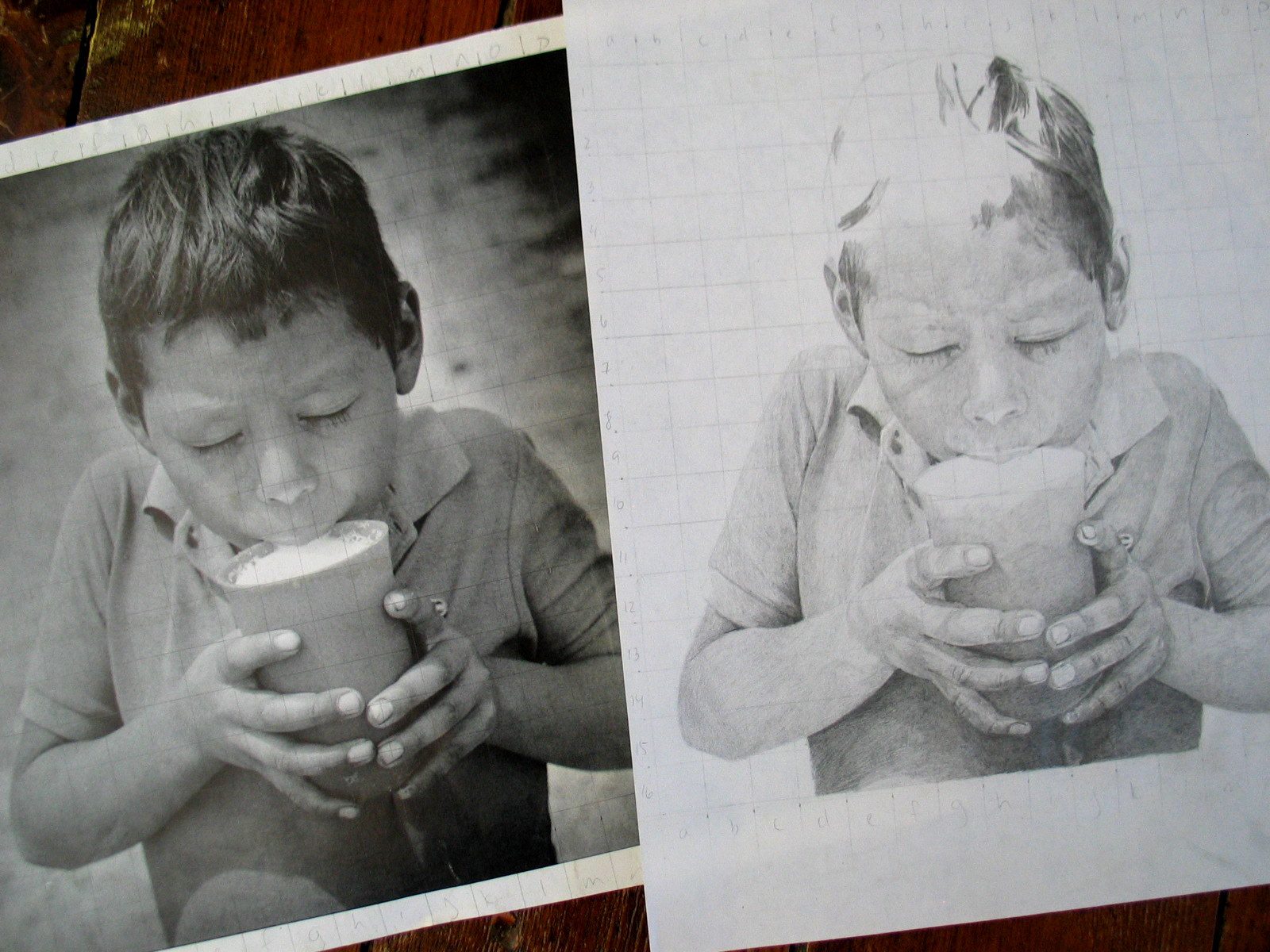 You can see the gridding process a little more clearly in the unfinished pictures. 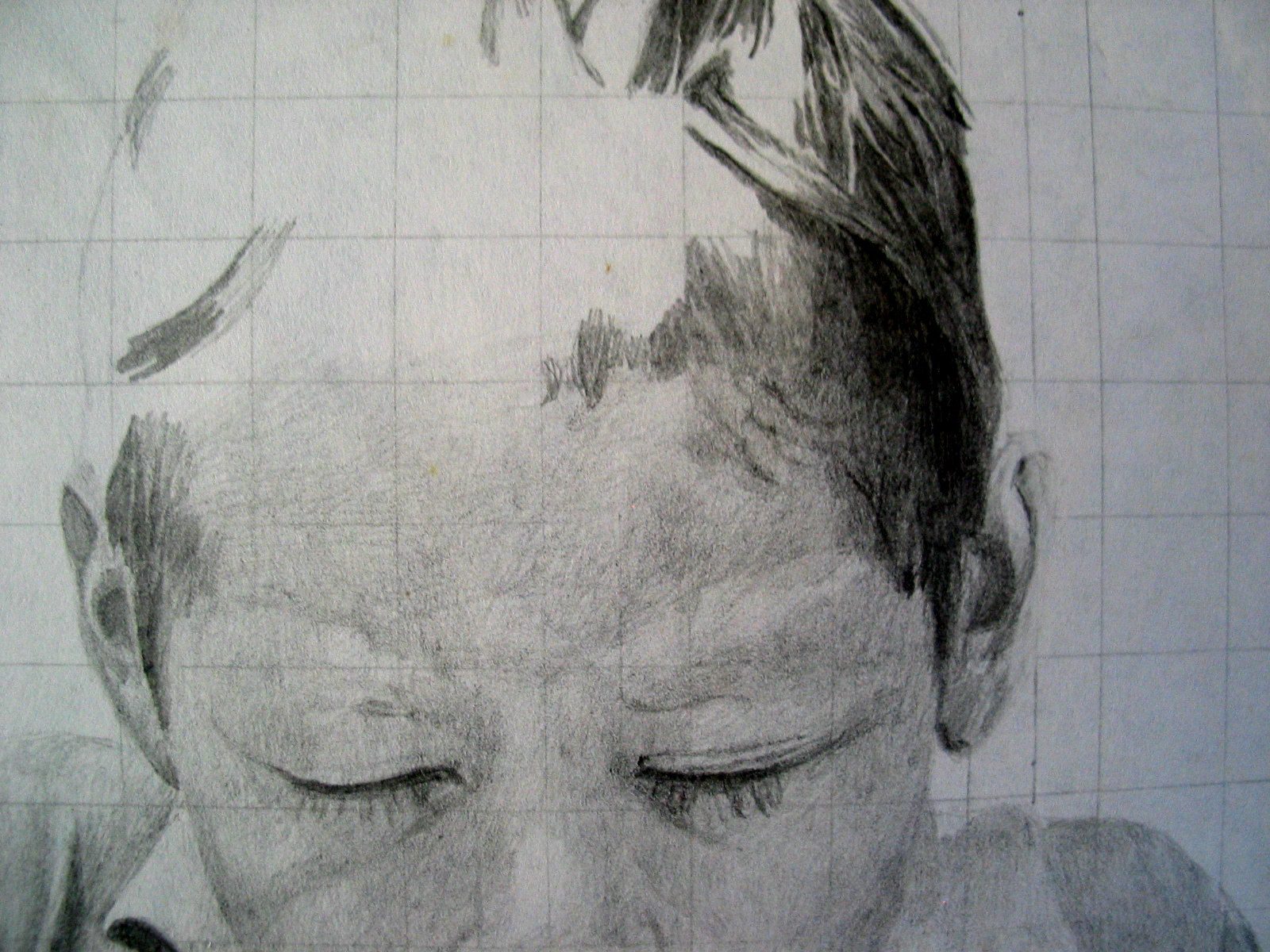 We learned about pastels in the last quarter of my senior year in high school, and then we used pastels to draw a face. (Mr. Art Teacher really knew how to drive home a point.) I chose to draw a picture of an old woman that I found in an old National Geographic magazine. After working on her for nine weeks, I grew rather fond of her and started referring to her as My Granny. 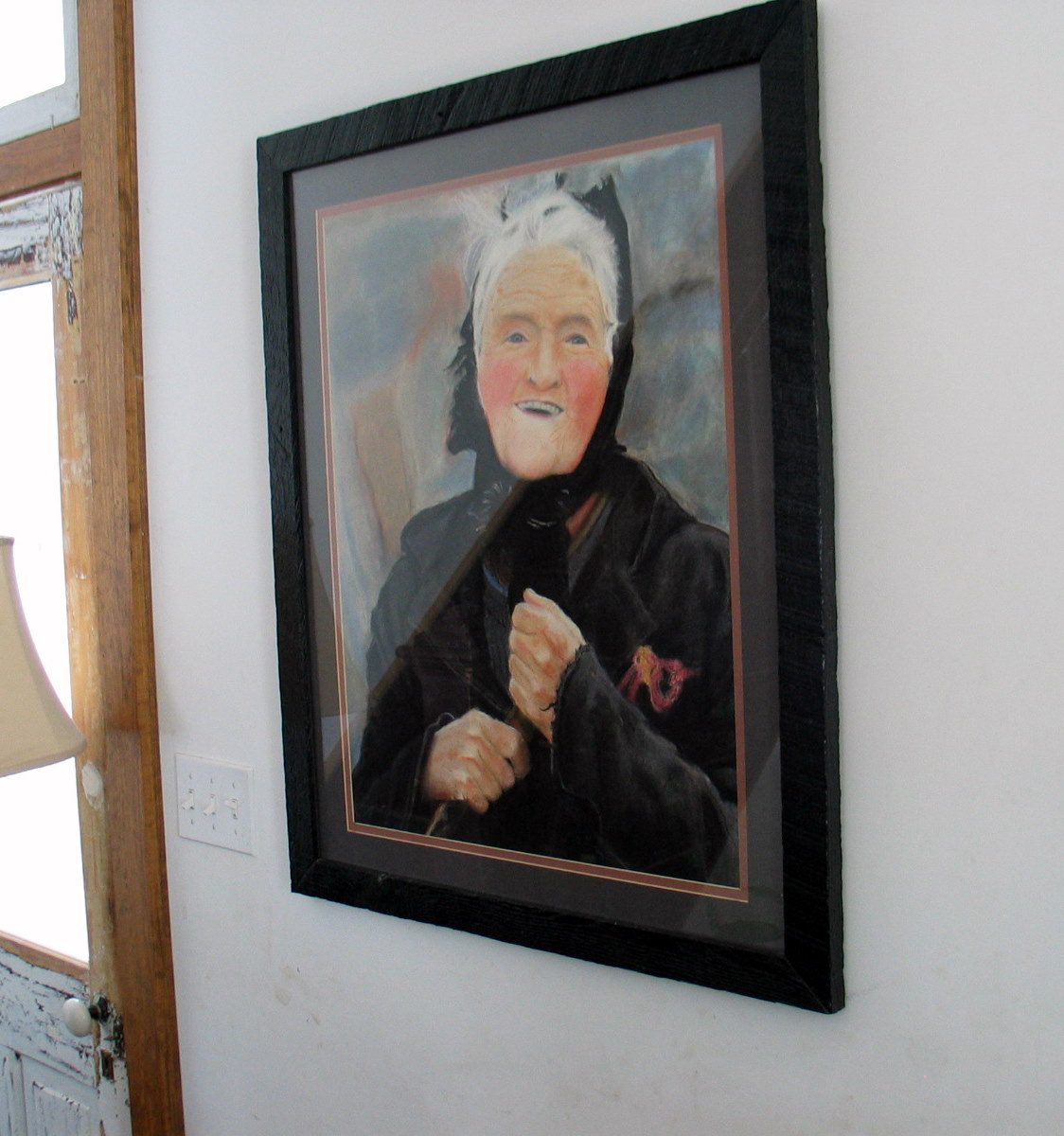 My parents had the picture matted for Christmas, and my father built the frame. It’s one of my most prized possessions. 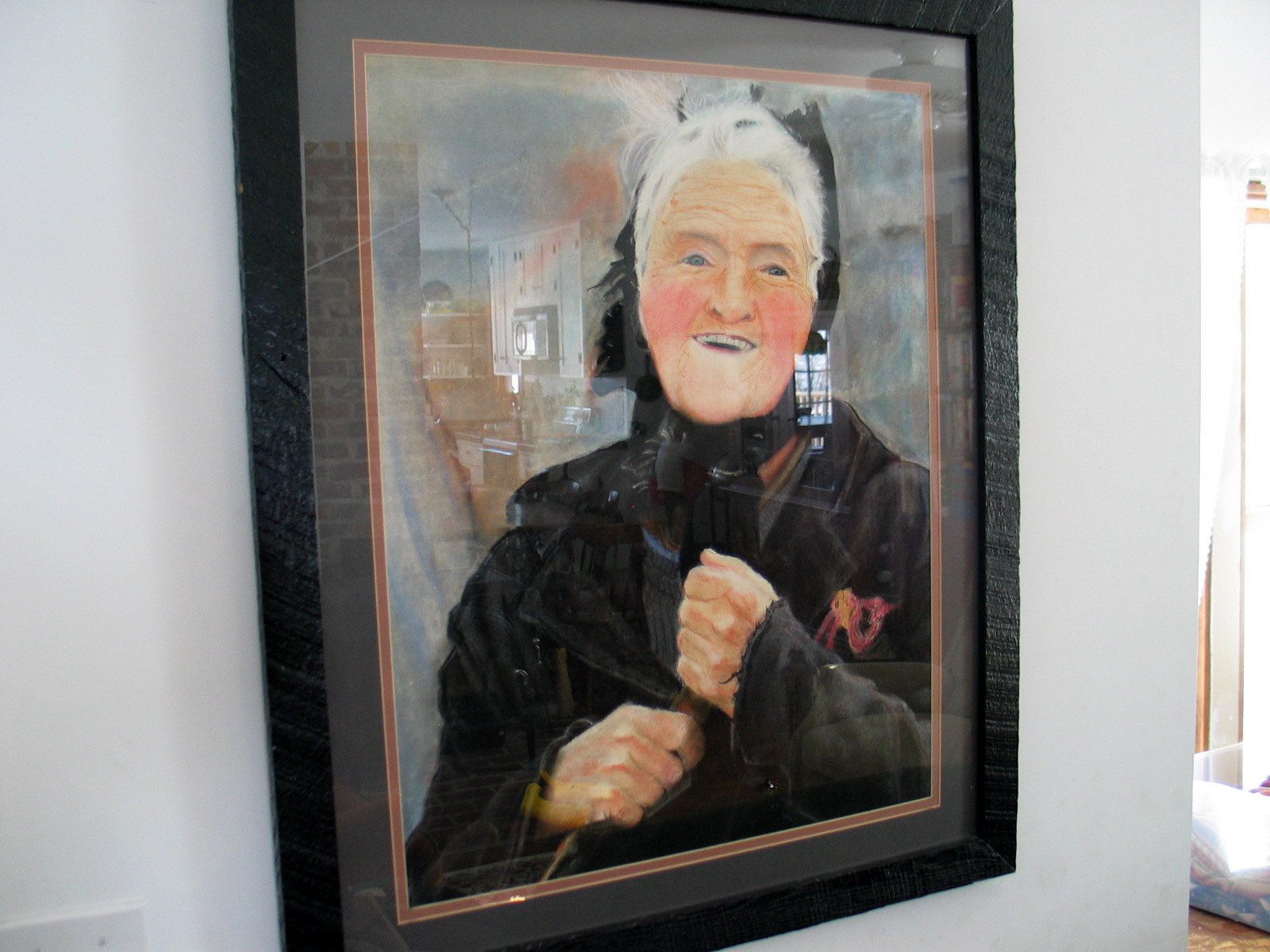 I’m particularly fond of her fly-away hair and her crinkly laughing eyes. She’s watched over our home for so long that she’s practically a member of the family. In fact, when no one else is around, she talks to me. Sometimes I hold her stick so that she can flex her fingers, but though she pleads most pathetically, I refuse to give her a turn with the hairbrush. 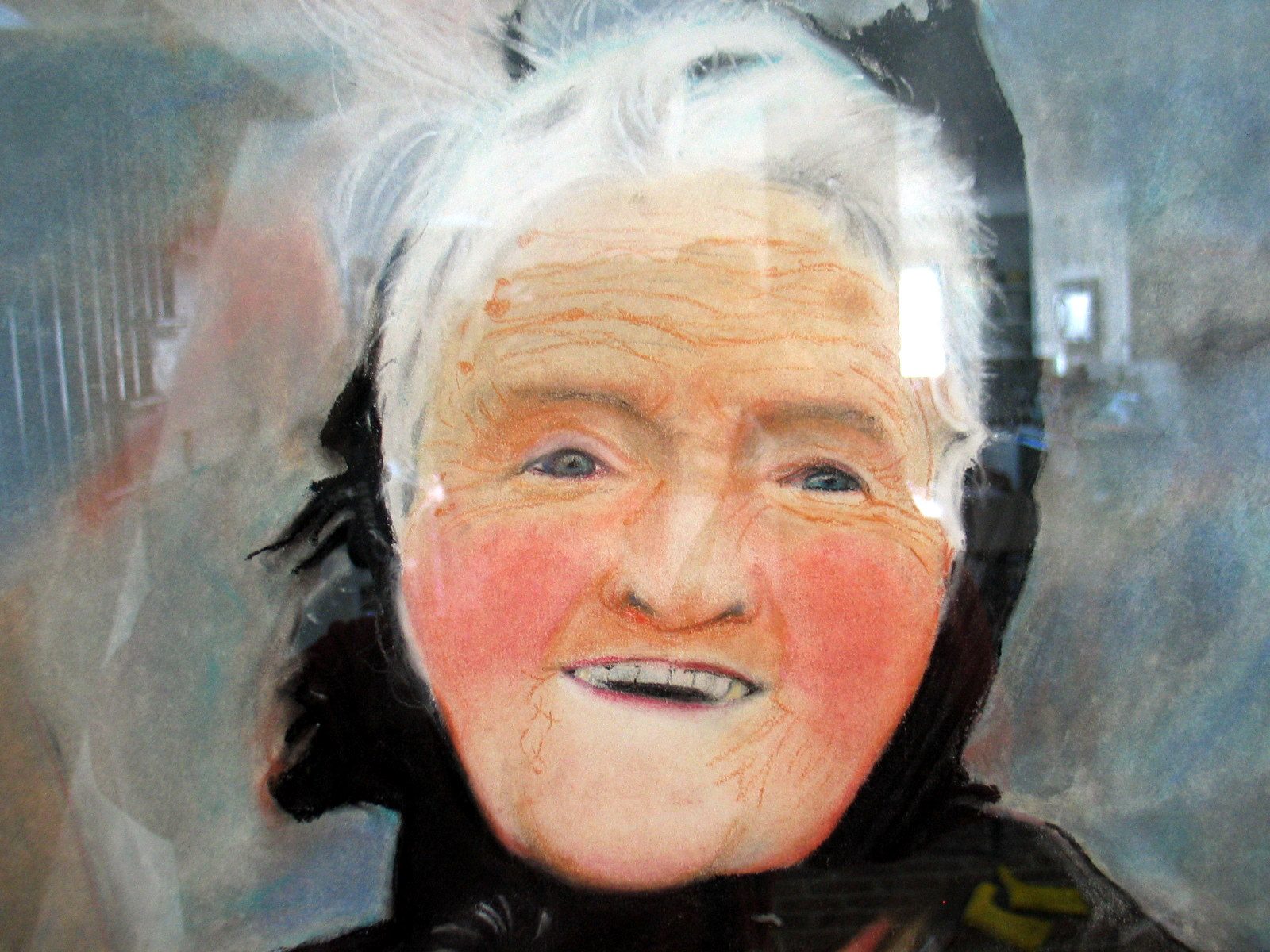 I never draw anymore. I’m not actually an artist. I’m not compelled to pick up paper and pencil and record my world through pictures, and the pictures I did draw didn’t come welling up out of me—all my art was copycat work. Which I don’t think discredits it as art; it’s just not inspired art.

In any case, inspired or not, I plan to teach my kids the techniques that I learned in high school. I saved all my notes from class, so I’m equipped and ready. And, if and when my kids go to high school, I will insist—no ifs, ands, or buts—that they take art every single year.

And I hope their art teacher is good and mean, too.

About one year ago: A bedroom birth. My baby is FOUR years old. I am such an old woman.