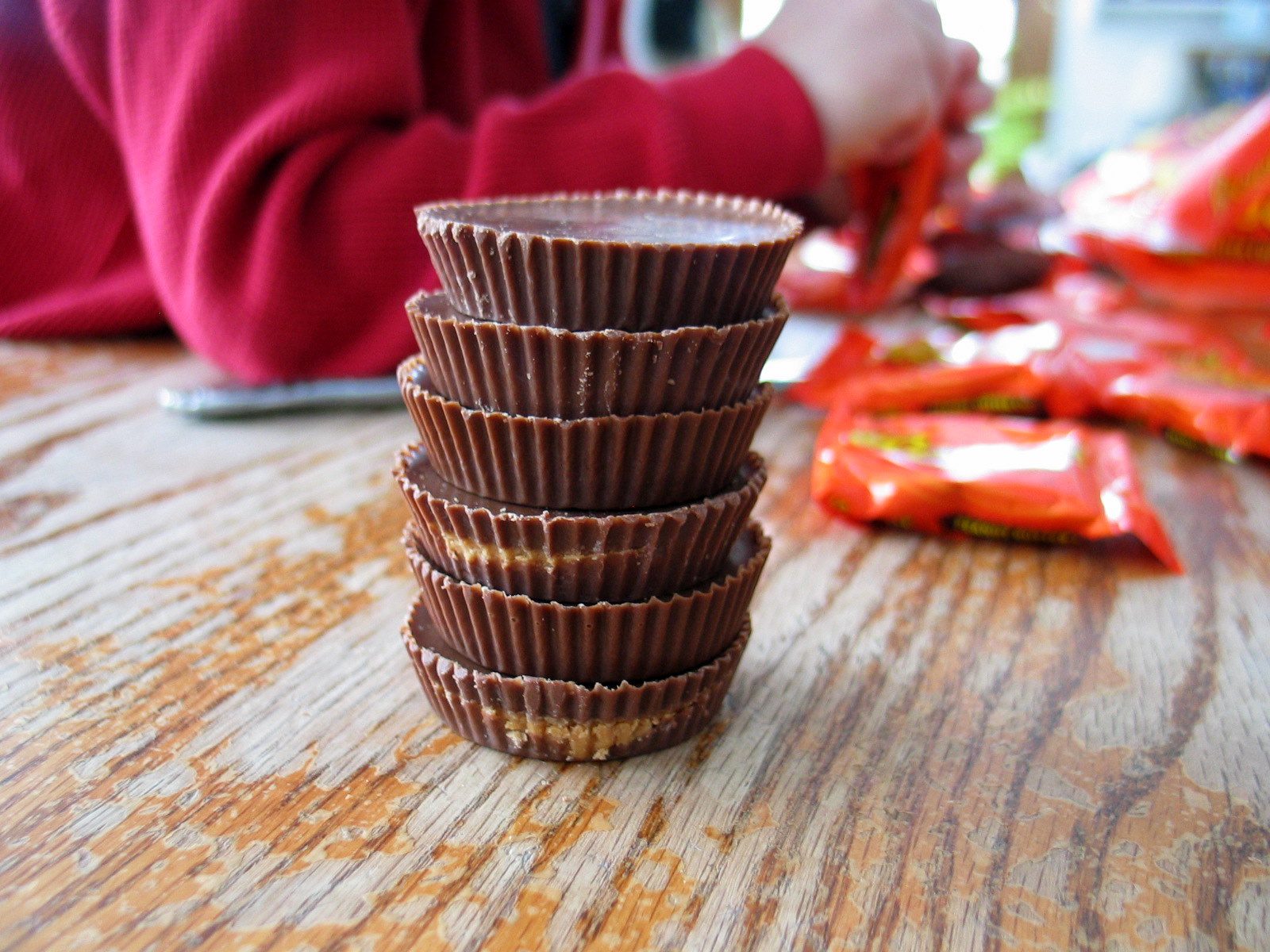 My kids were not fooled by the snow cream. They like it, kind of. But melted snow is melted snow.

The Baby Nickel is a little different than the rest of them. He loves snow in its pure unsweetened form. In fact, he goes around eating up the clumps of snow that get tracked into the house. He scarfs them directly off the floor and wolfs them down, just like a dog (not that dogs eat snow off floors). (Though since the snow-clumps are dirty they might not qualify as “pure”. Maybe he just likes the taste of wet rubber?) If I clean some of the snow up before he gets to it, he gets mad at me.

Like I said, snow cream doesn’t quite cut it. If anything, it got me craving for real ice cream. So when The Baby Nickel’s birthday came around and I asked him what kind of cake he wanted and he said, rapid fire, “Arainbowcakewithlollipopsontop,” I used my maternal powers to help him see the light.

“How about we do something different, mmm? Like, say, an ice cream cake? It would have peanut butter cups and caramel sauce and whipped cream. We could put sprinkles on top, or even some lollipops, if those are really important to you. How about it, kiddo?”

I love it when they’re three-almost-four, so easily sway-able. (And by the way, I’m not manipulative; I’m charismatic.)

When I was a kid, we got to choose the kind of cake we wanted, but then we weren’t allowed to see the end result till it was time to eat it. Mom did all sorts of creative decorative things (think watermelons and mailboxes with a can of coke stuck inside and barns and chickens); it was one of our presents. In my house, the kids (or, eh-hem, the mother) choose the flavor of cake and then help to make it. Getting to work in the kitchen with me is part of the present. (Wow. That made me sound terrible, like the type of mother who makes her kids eat popsicles in the bathtub. I would never be so picky; I just kick them out of the house entirely when sticky, drippy food is involved.) 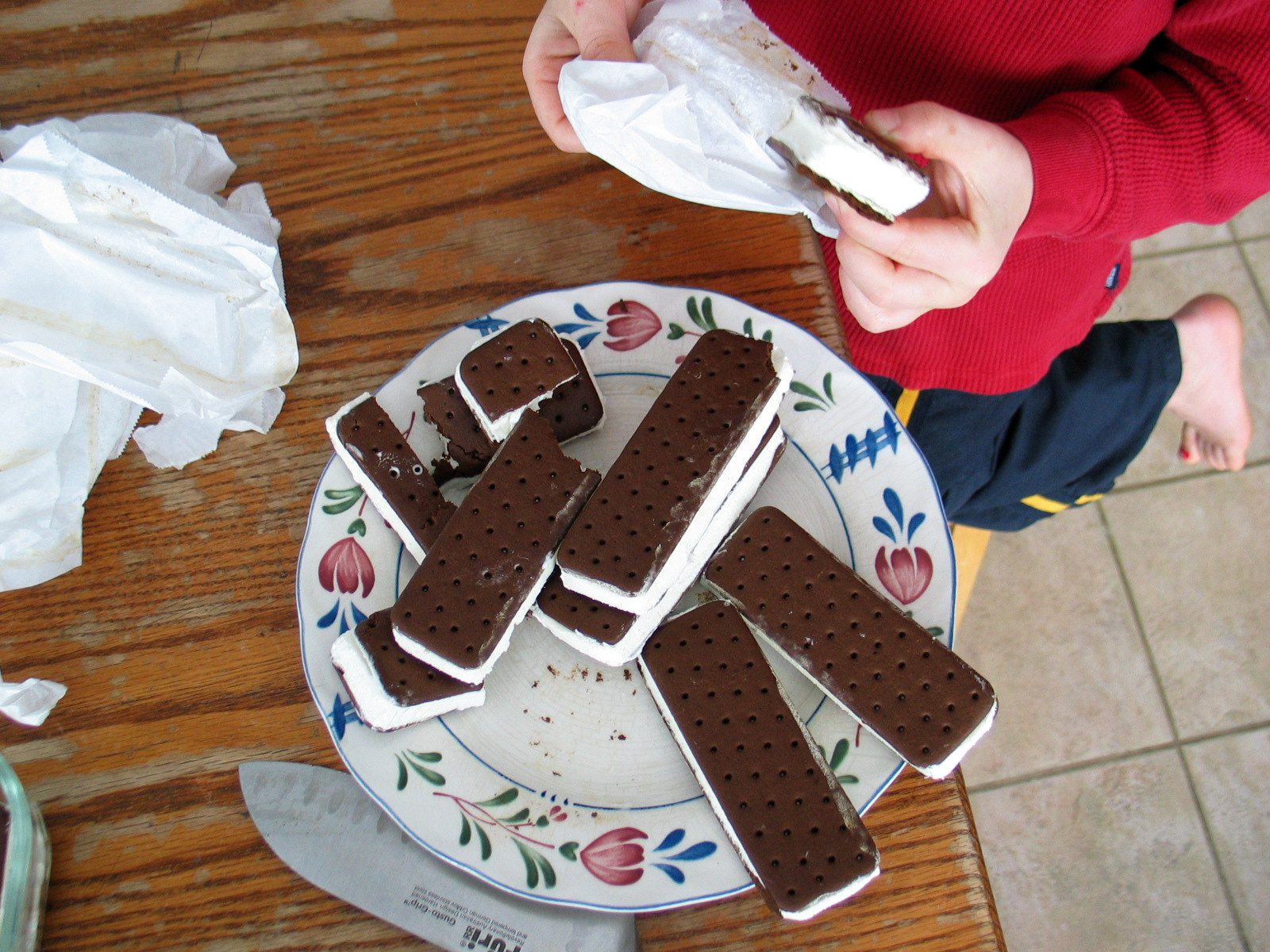 So The Baby Nickel worked really hard to make his cake. It involved a lot of unwrapping. 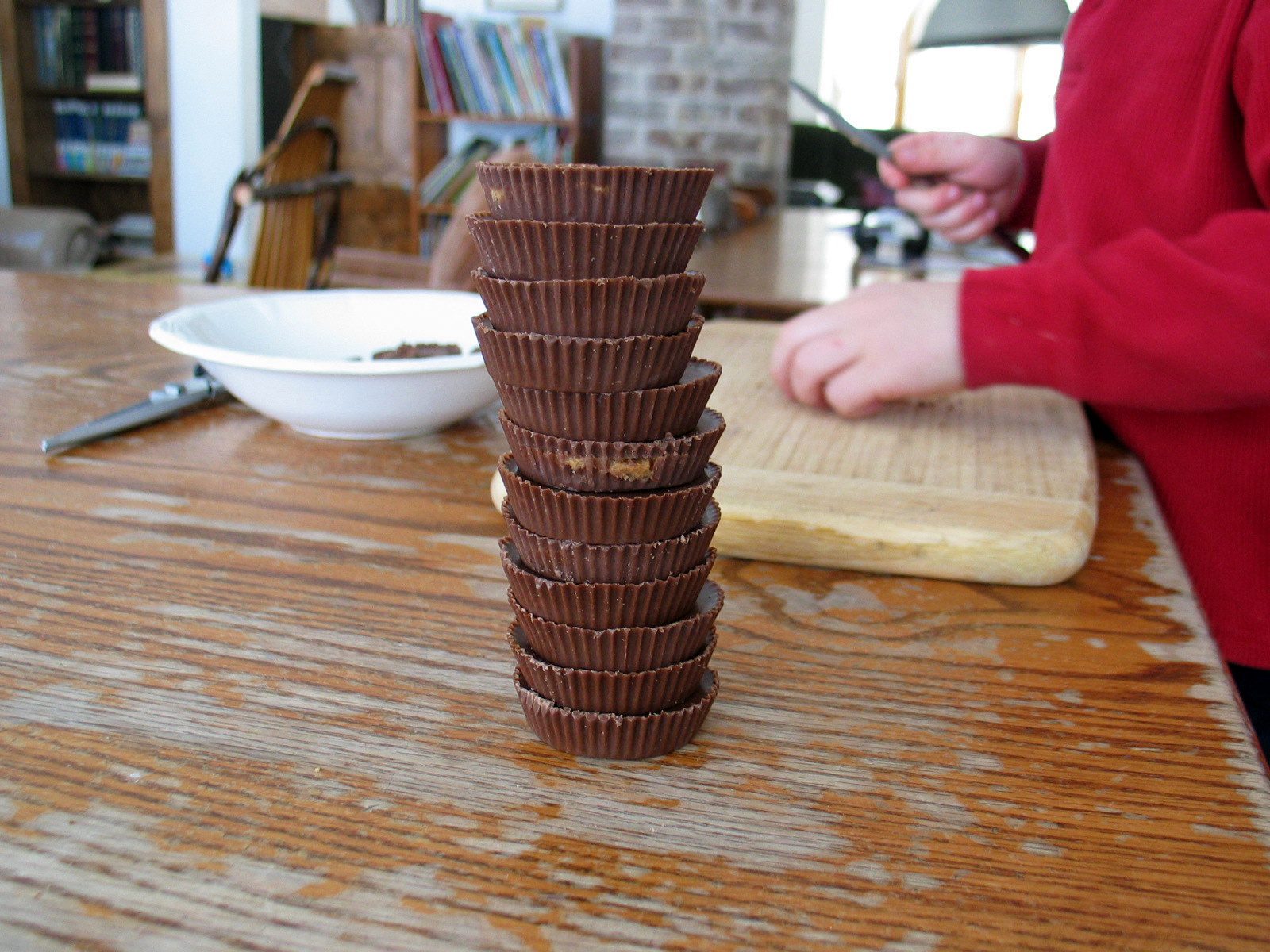 And a bit of stacking and chopping. 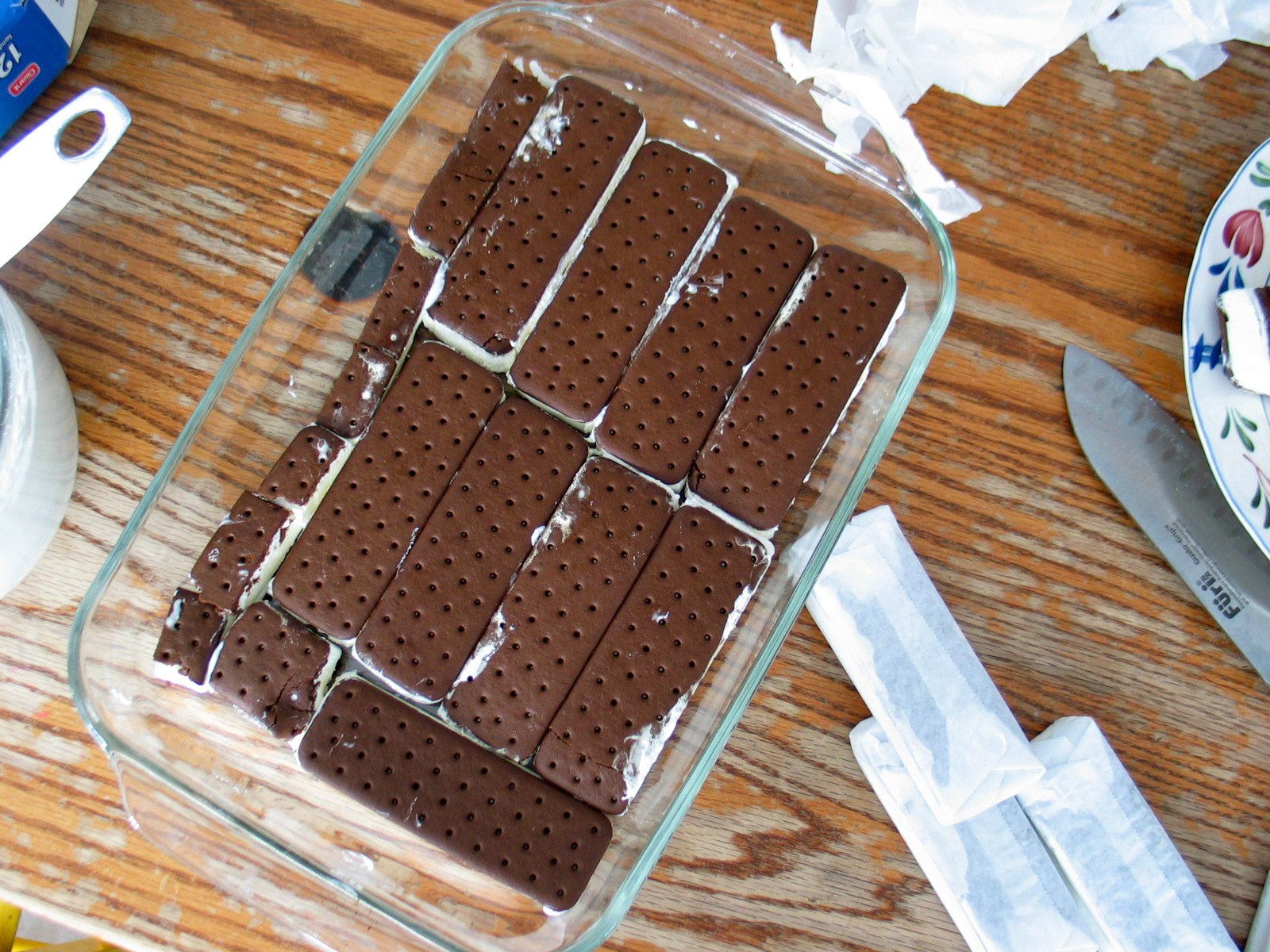 And then there was some layering. We call it real-life geometry. 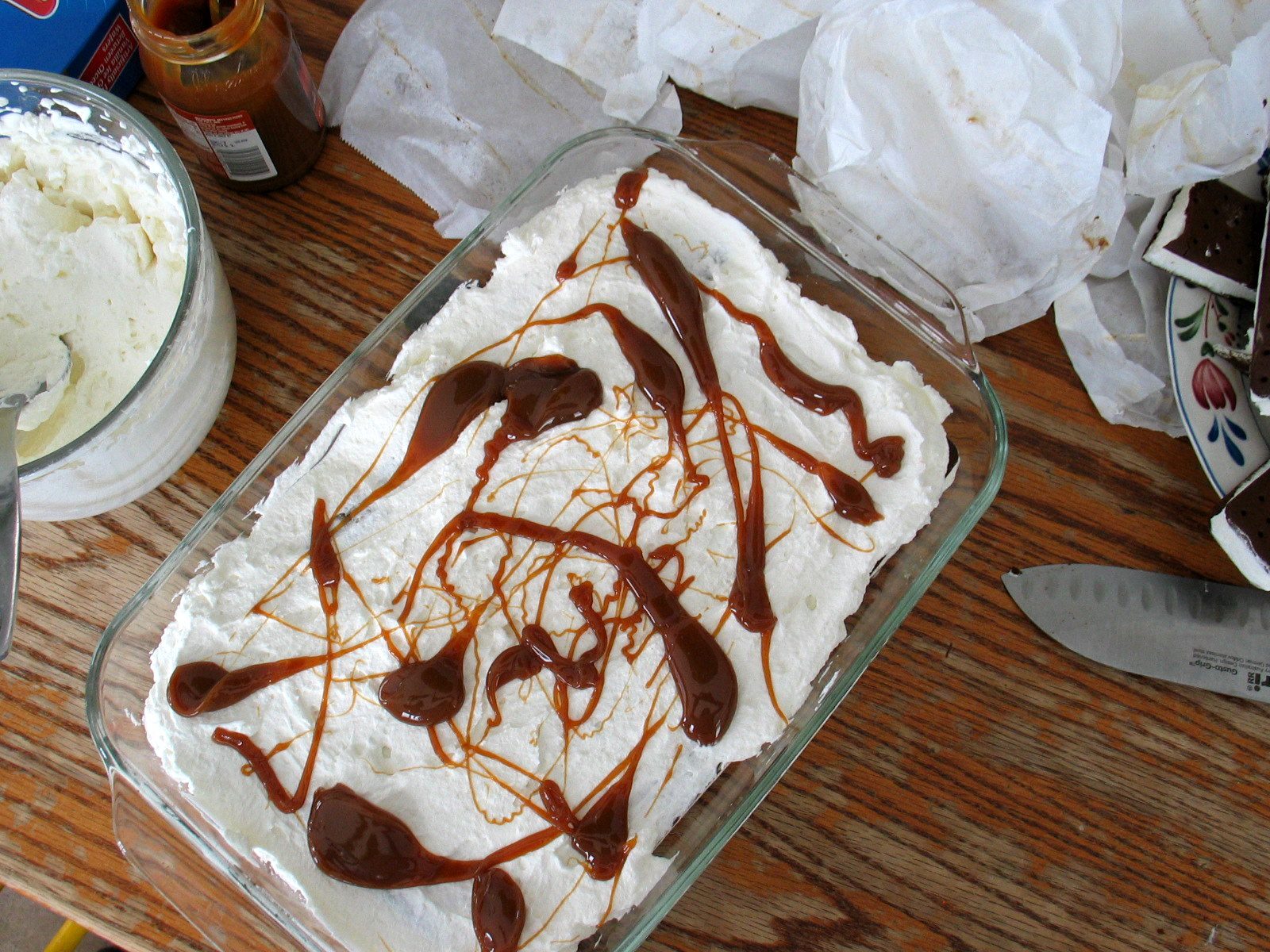 And then I drizzled the caramel, a la Jackson Pollock. 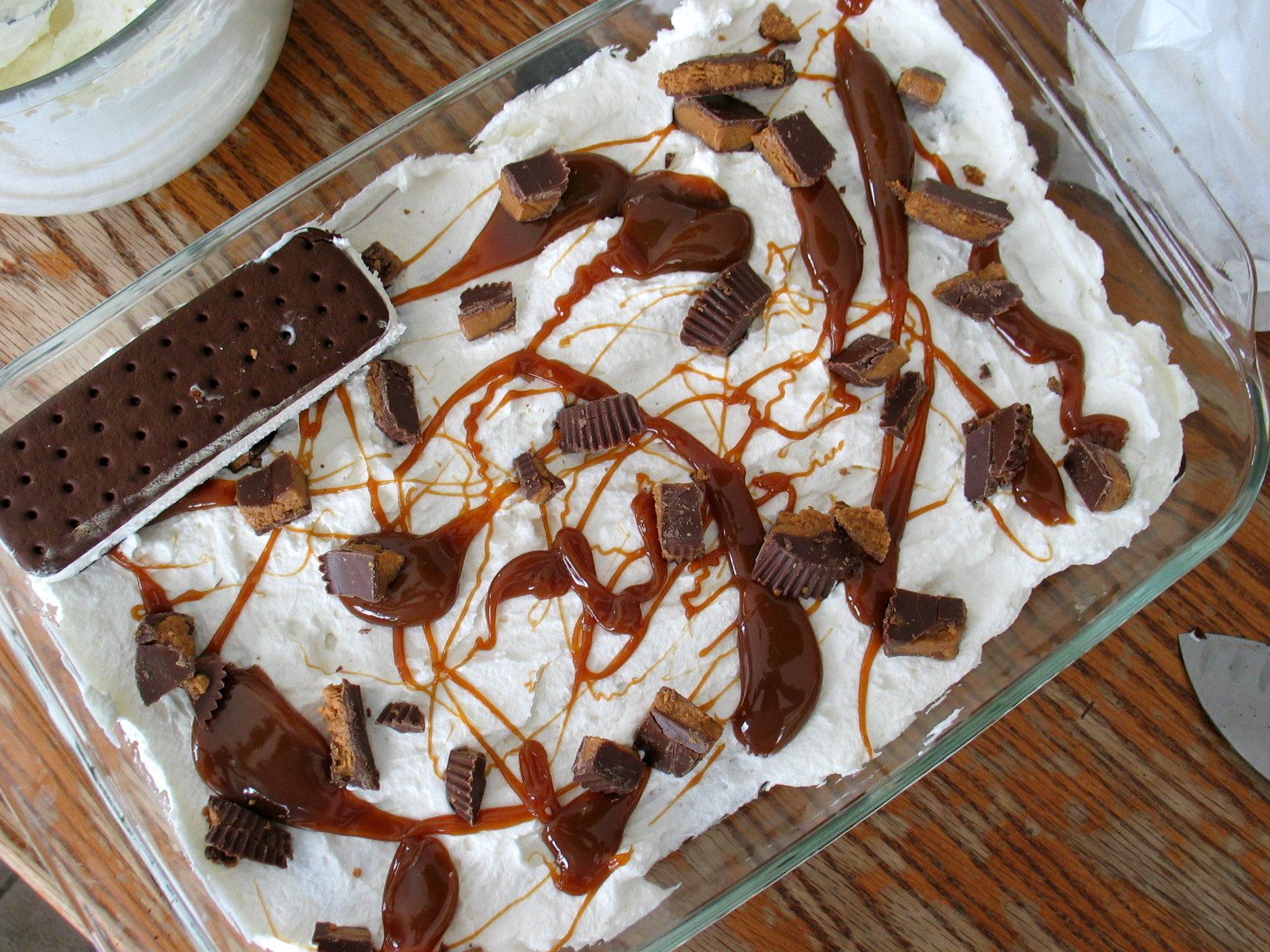 And then we did the layering part again. Practice makes perfect, you know.

It was a struggle to keep the other kids out of the kitchen. They kept trying to sneak in and snitch tastes, and every time The Baby Nickel licked something (and he licked a lot of things), there was a great outcry from the other children. 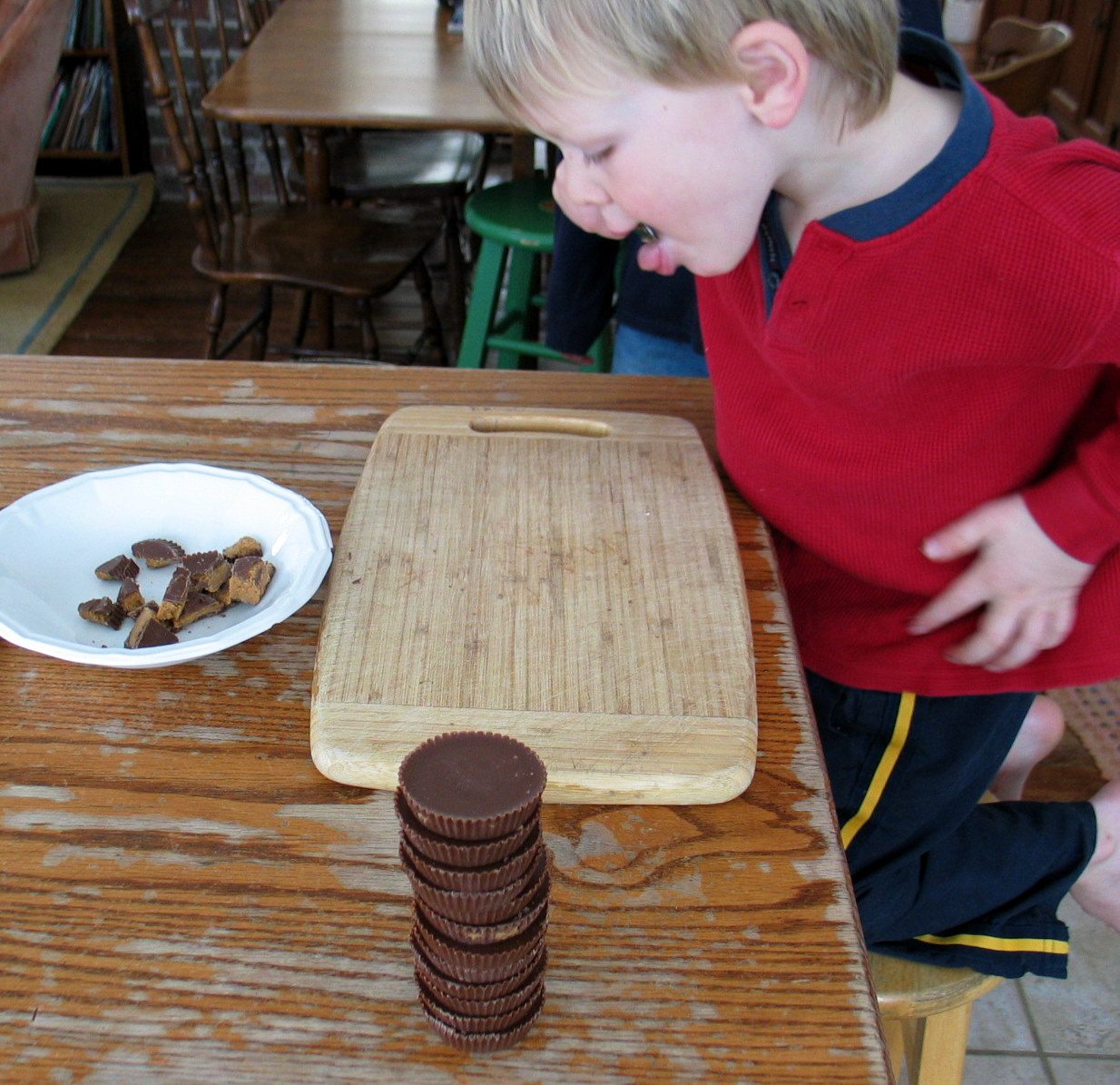 I heard all about how awful it was for him to be tasting and touching—He’ll make us all SICK! It’s DISGUSTING! It’s GROSS! It’s an ABOMINATION!—but I just smiled and chalked it up as a real-life science lesson titled Germs And How They Might Spread. (They didn’t actually say the abomination part.) 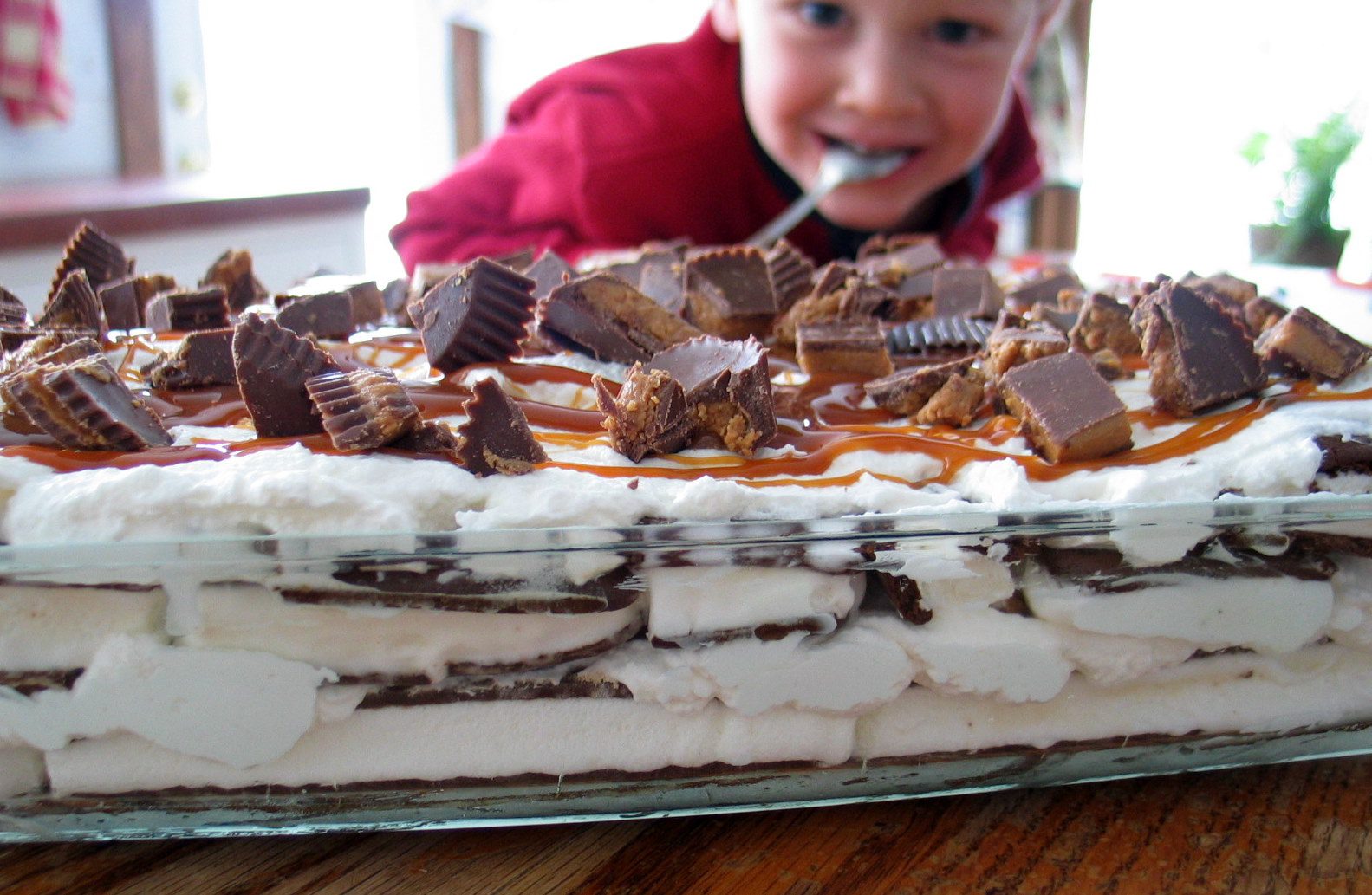 Did you have any idea that ice cream cakes were so educational? 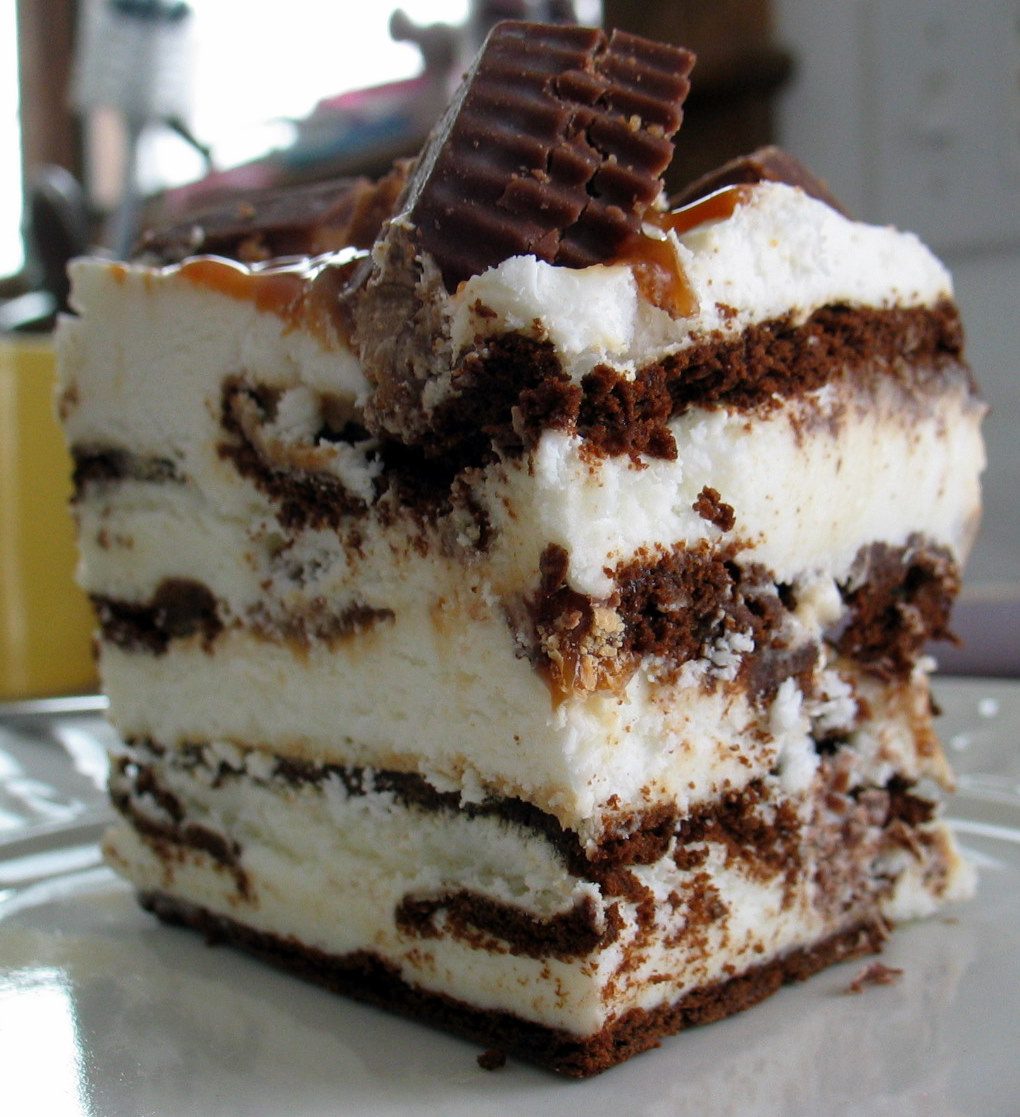 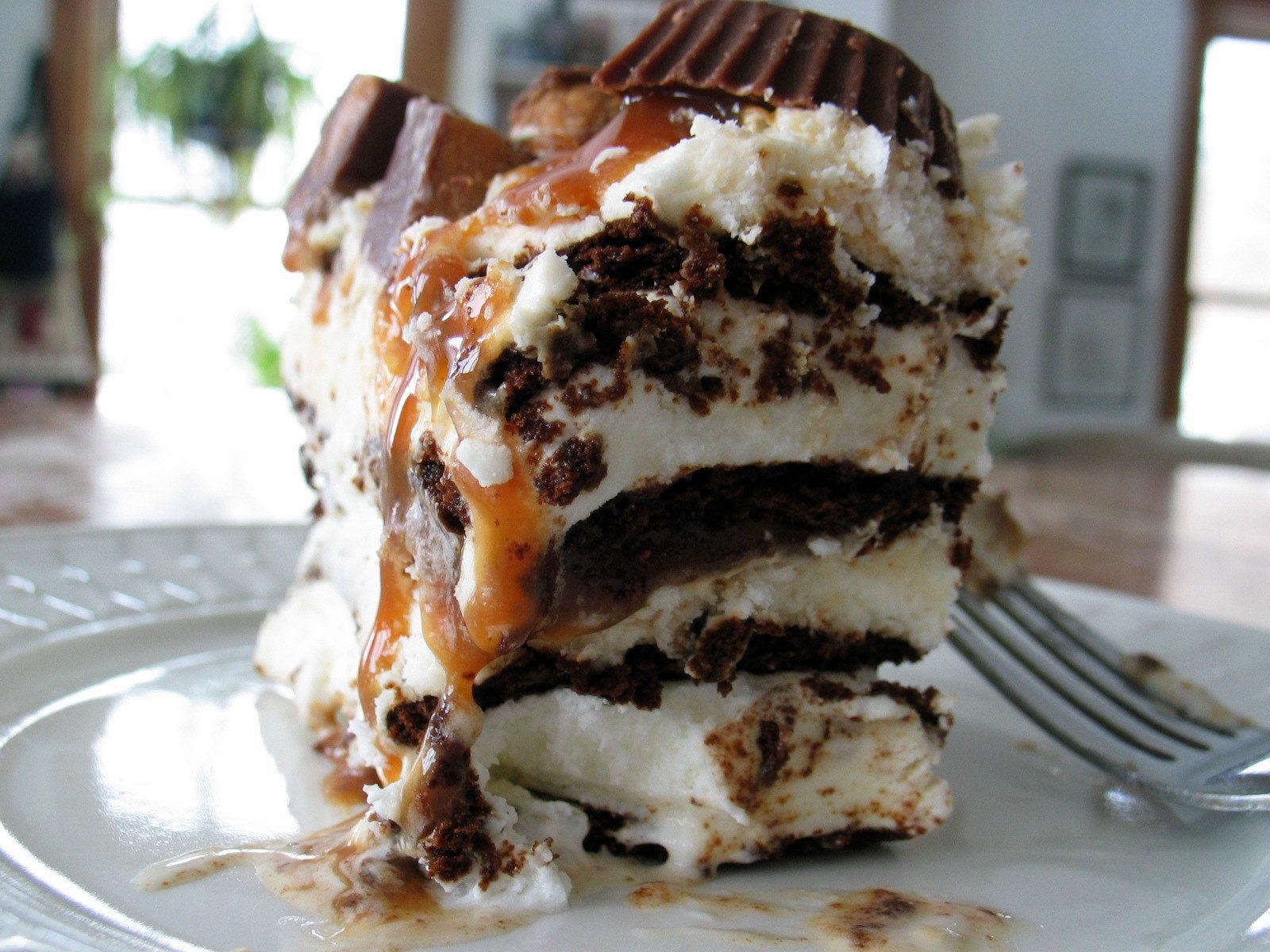 Not that we’re keeping track of points around here.

Ice Cream Cake
I think I got this recipe from my friend Wendy, but I’m not sure. It’s all over the web—one of the most basic and uninvolved cakes possible. And perhaps one of the best excuses to load up on junk food, especially when you’re smack-dab in the middle of a spending freeze.

This is not my typical dessert—the only homemade thing is the whipped cream—but it could become as homemade as you like. You could layer plain chocolate wafers (or make your own) with homemade ice cream of any flavor, drizzle it with your own fruit or chocolate or caramel sauce, and make your own candy (try this or this) to sprinkle over top. The options are endless.

Put a layer of ice cream sandwiches in the bottom of a 9 x 13 pan. You may have to cut some of the sandwiches in order to fill all the nooks and crannies. Spread half of the whipped cream on top. Drizzle on half of the caramel sauce. Sprinkle half of the peanut butter cups over top.

Repeat the process: the rest of the sandwiches, whipped cream, caramel sauce (use flair!), and peanut butter cups. Cover tightly with plastic wrap, and freeze for a couple hours before serving.

About one year ago: Potatoes with Roasted Garlic Vinaigrette