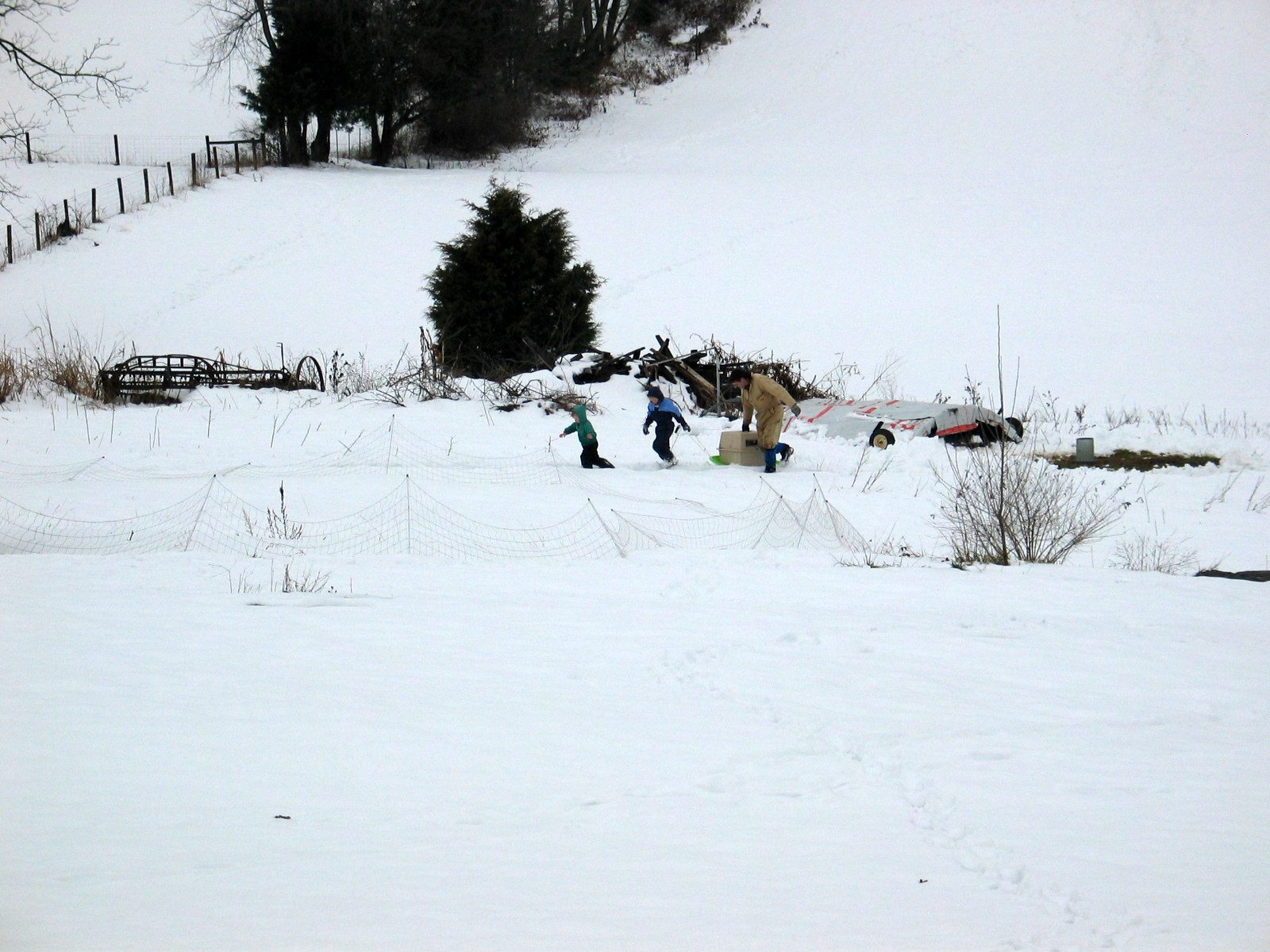 Disclaimer: if you are at all bothered by the sight of chicken entrails, do not read any further.

The day after Christmas, we butchered eleven roosters. I’m taking extreme liberties with the word “we.”

It went something like this: Mr. Handsome said, Hey, let’s butcher chickens, and then he and I worked together to bundle the kids into their snow clothes and he took them outside and I snuck back to my computer by the fire.

The kids kept coming to the door because their hands were cold or they wanted a knife or they had to pee, so I finally locked the doors. I didn’t want them coming in with their chicken-y hands, sliming up my door knobs and bathroom spigot. And I didn’t want to keep being bothered. But if I ever heard the door knob rattle and then saw Mr. Handsome press his nose up against the kitchen sink window, I hopped. I didn’t want to irk him too badly, considering he was outside in the snow and cold, dealing with chickens and kids and guts, all by his brave lonesome.

I did step outside to take pictures of them bringing the chickens up from their pen down in yonder field.

Actually, Mr. Handsome rang me on his cell phone and told me to get my butt outside to see my kids hauling chickens, via sled. 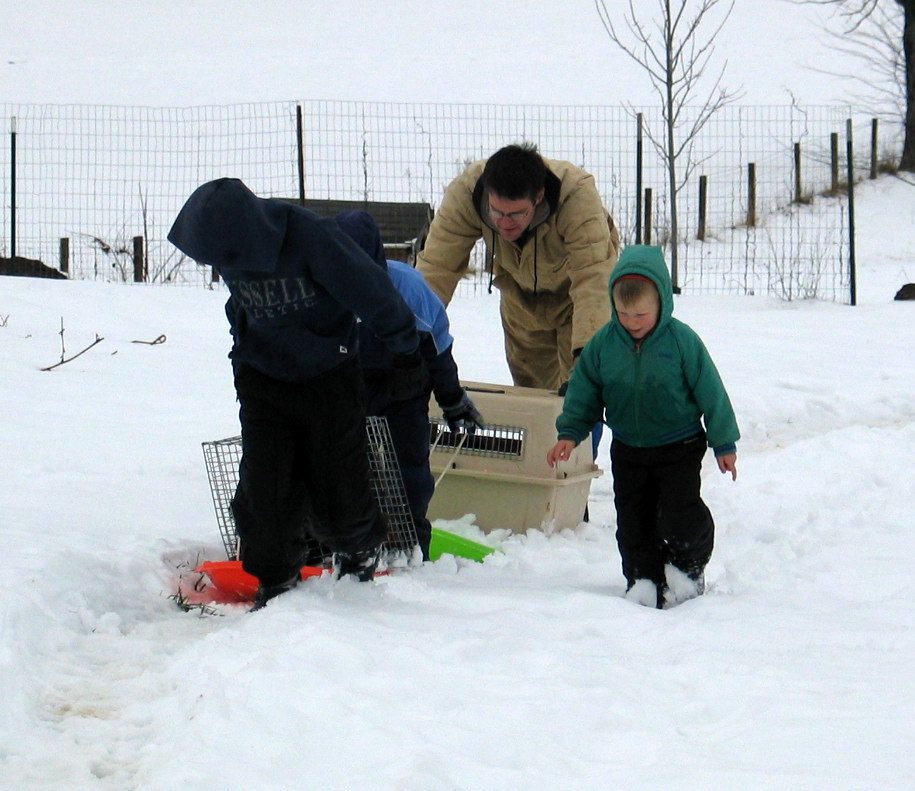 When I got done snapping the pics, I turned and saw the eviscerating station set up behind me … on my side porch. 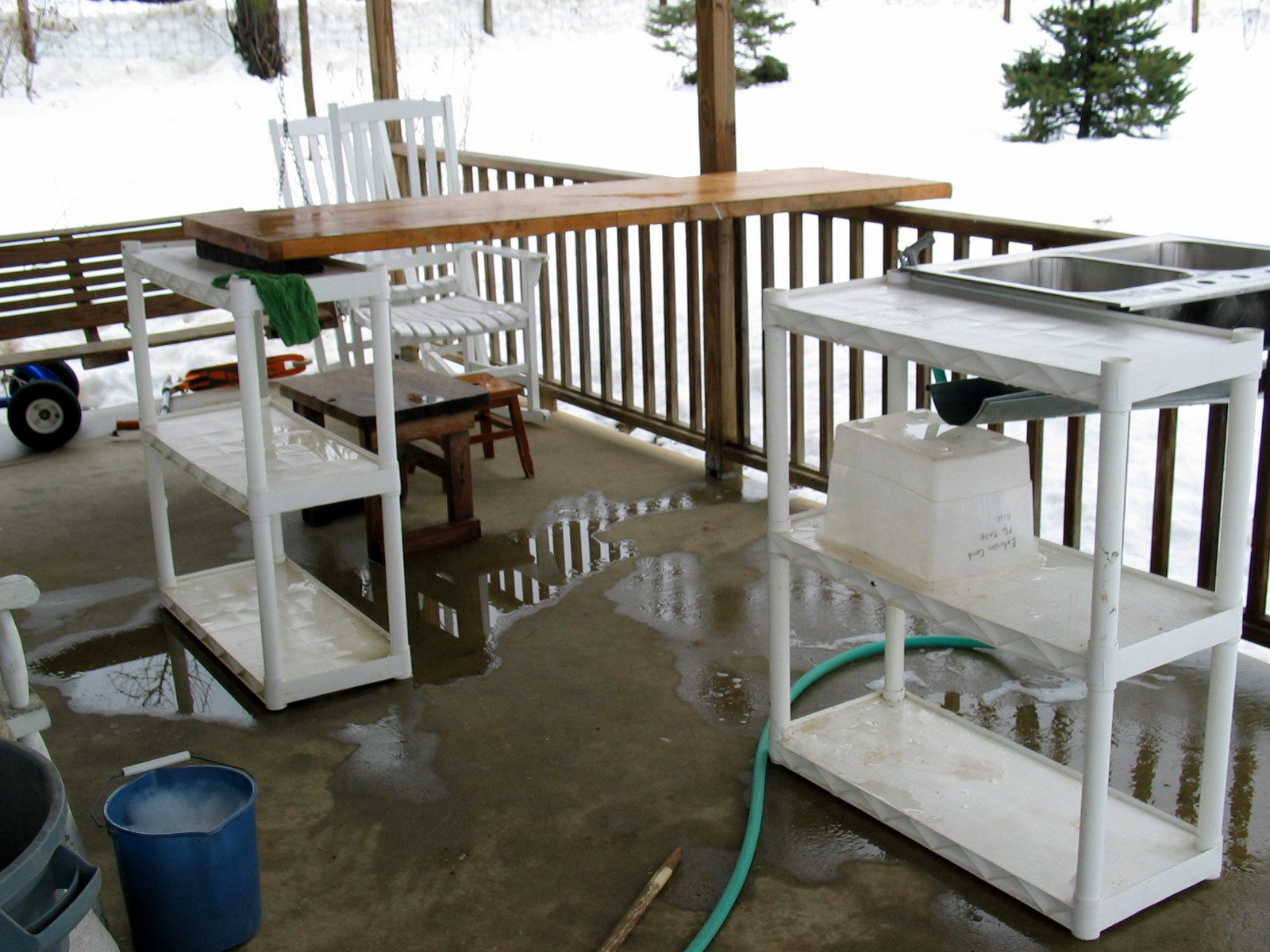 I groaned and ran back inside.

But after a bit, I heard boots stomping and chirping voices. And then Yo-Yo stuck his head in the door (this was before I got peeved and locked them out) and asked for my best chopping knife. “I’m ready to cut off the feet,” he said. “I know how.”

“Did Papa tell you to use my knife? Did he say you could start?”

I made him wait.

One by one, the kids straggled up to the porch, naked chickens hanging from their hands. They flopped them down at the eviscerating station (I like saying that—it makes me sound butcher-savvy) and examined them thoroughly. Miss Beccaboo searched for pin feathers. 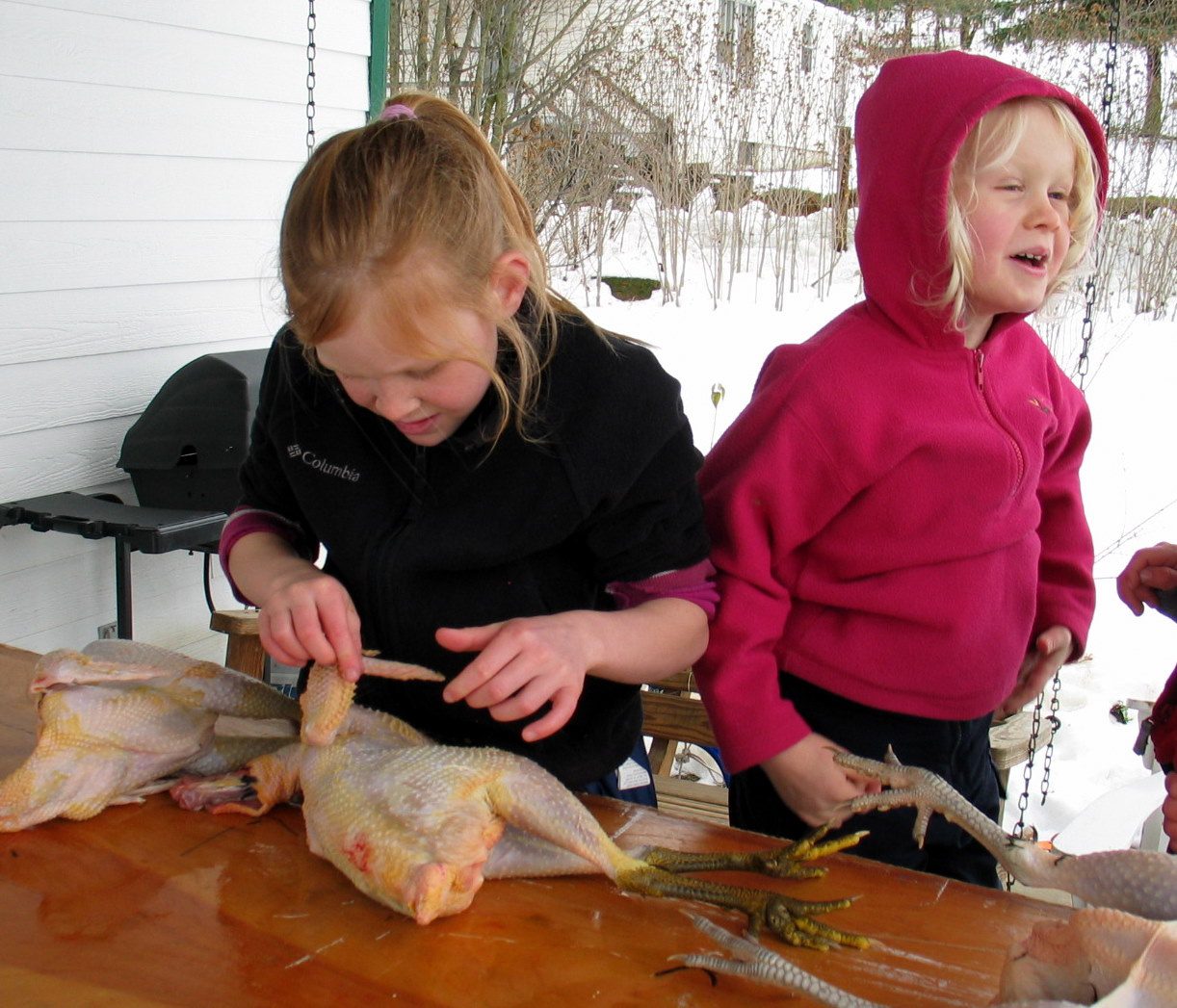 Then she discovered she could make them balance on their feet. 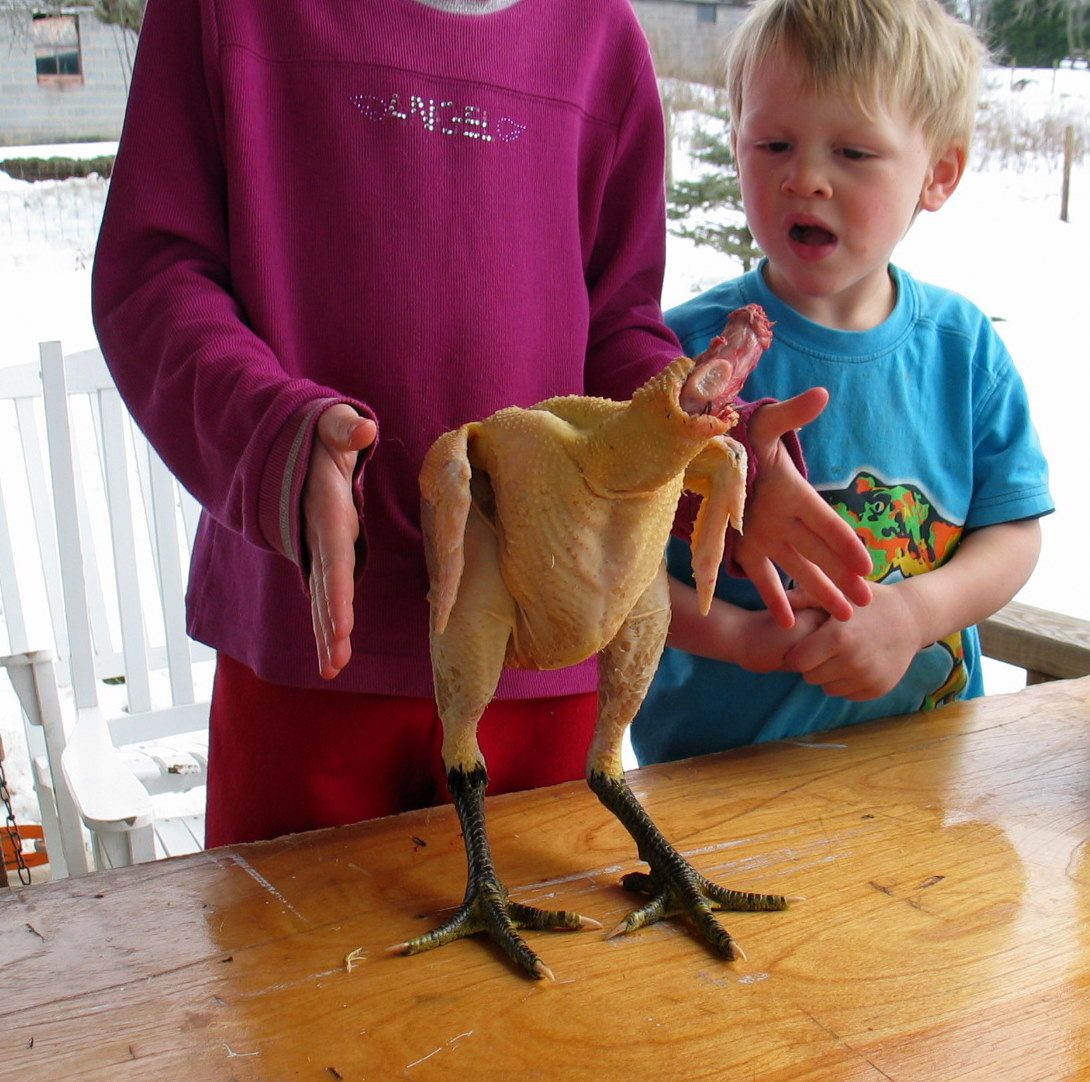 Yo-Yo’s chicken leaped through the air… 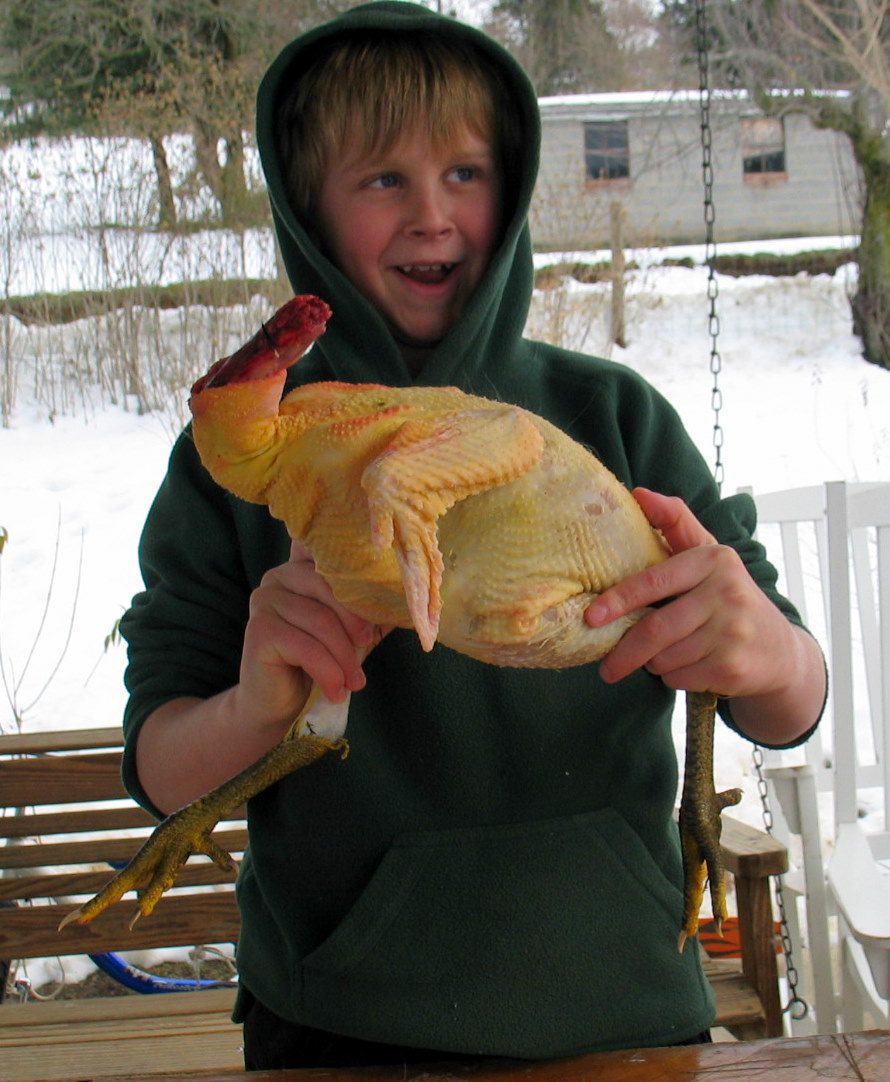 and danced the polka. 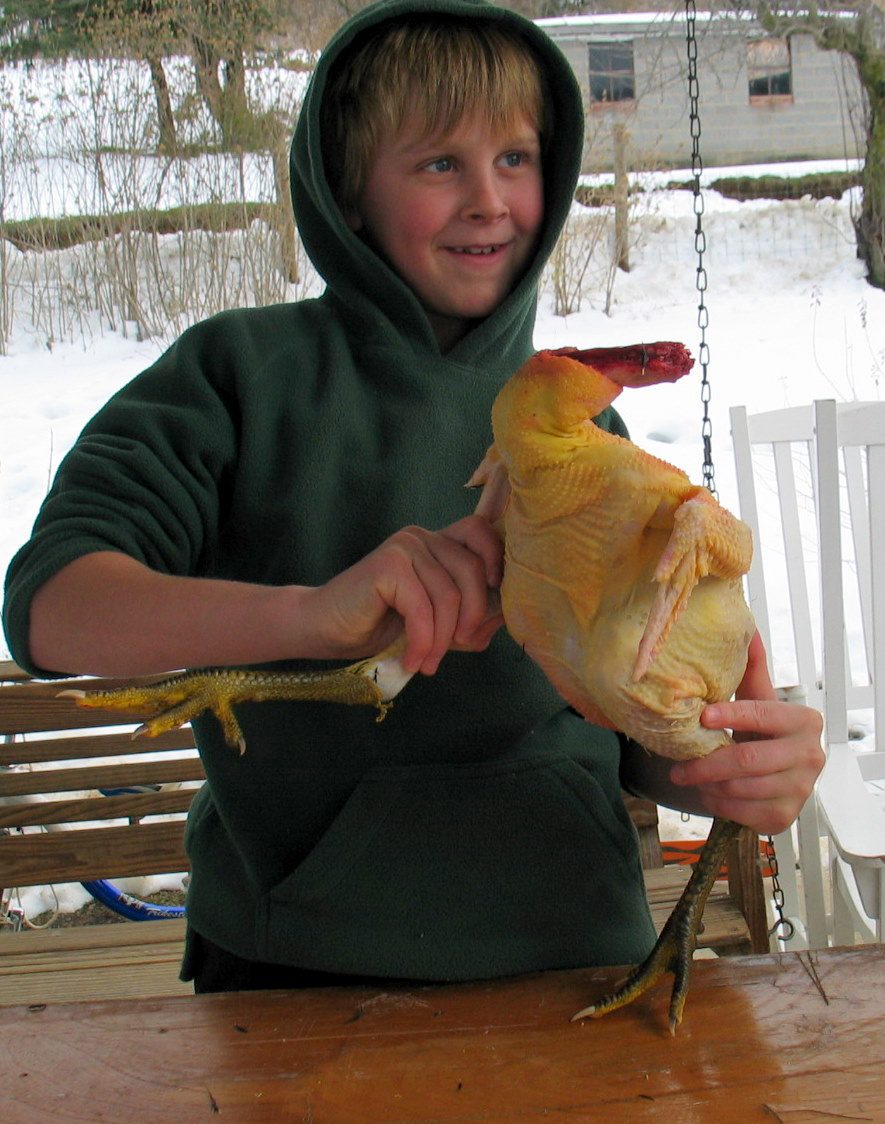 And then he cut off its feet. 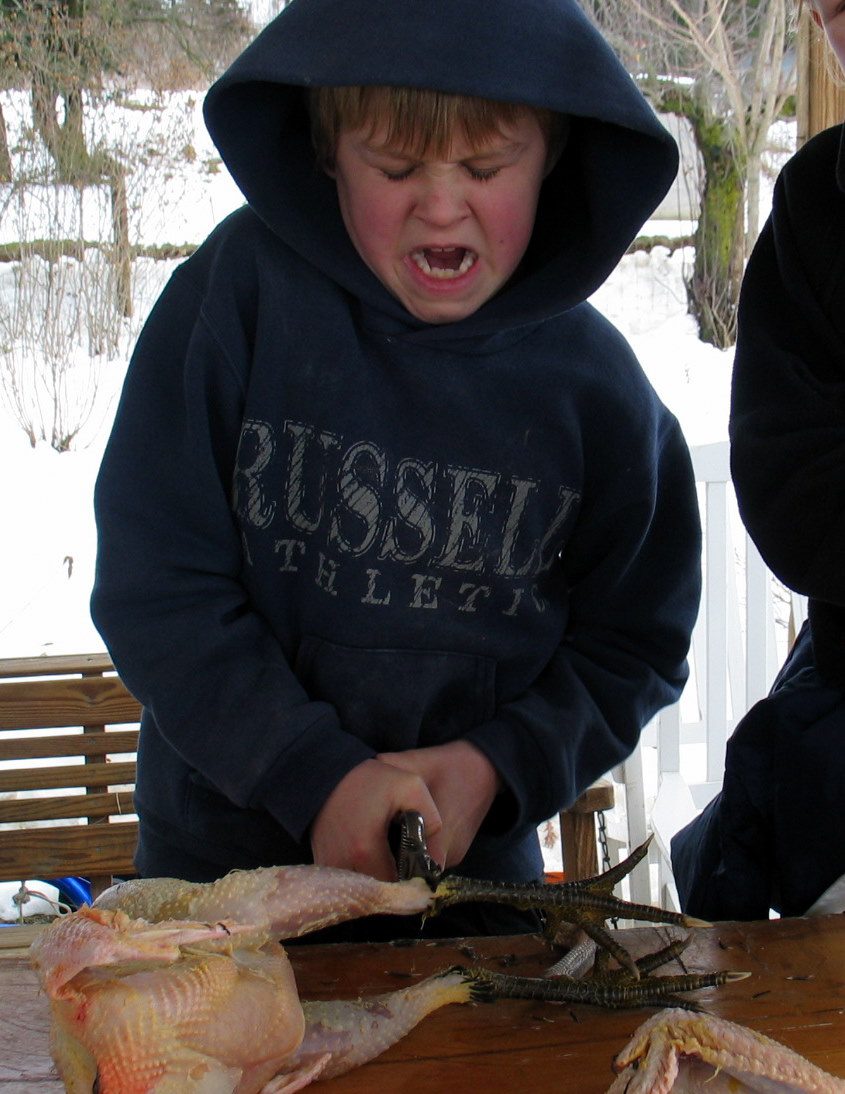 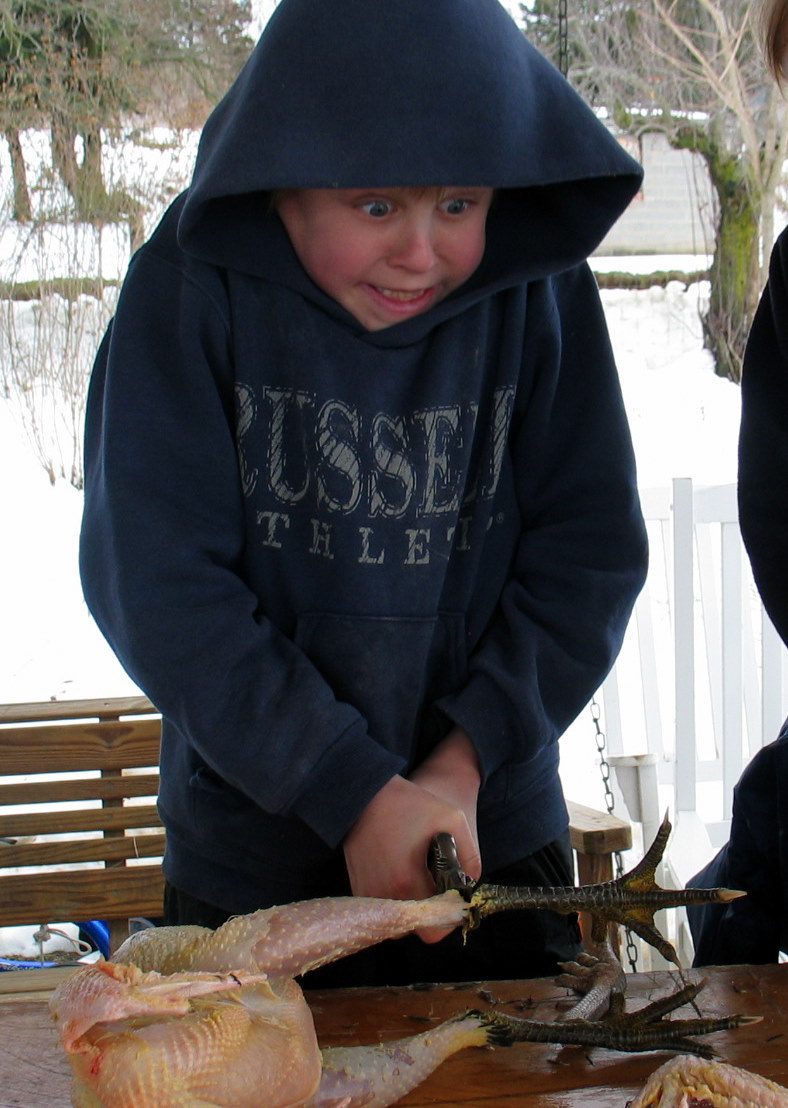 The Baby Nickel alternated between clutching the chickens, 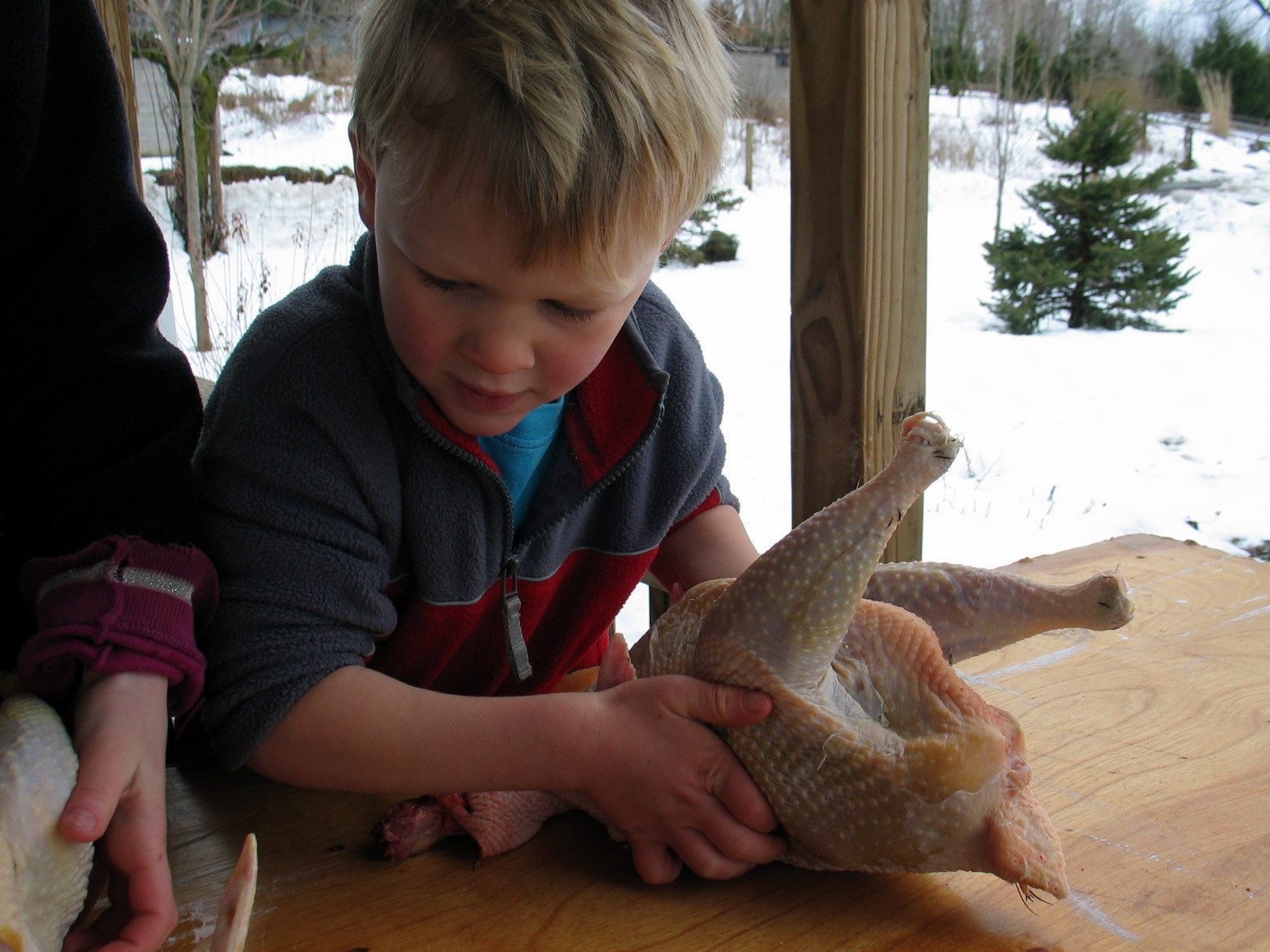 and examining all their orifices. 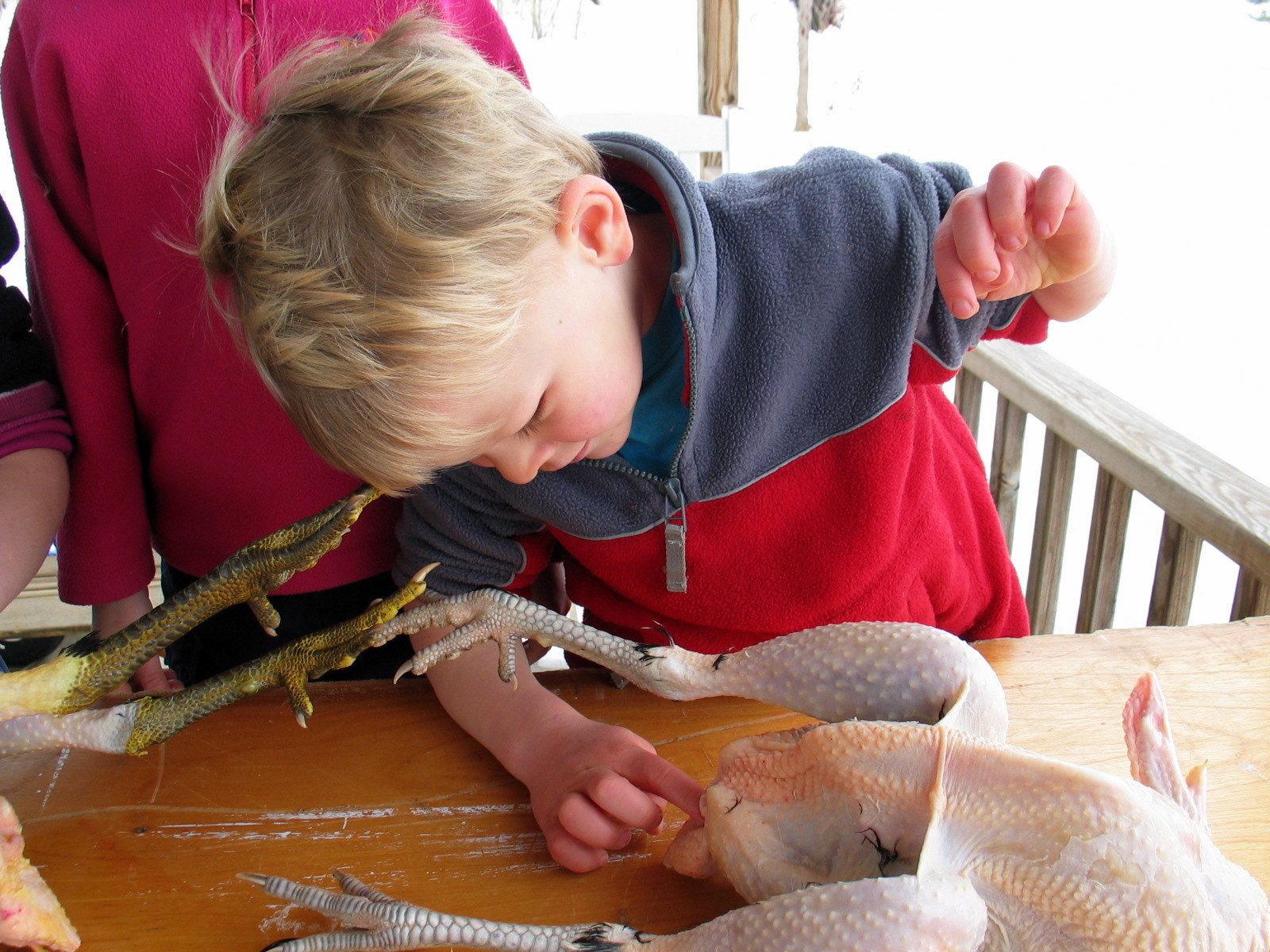 He even looked one of them in the eye … kind of. 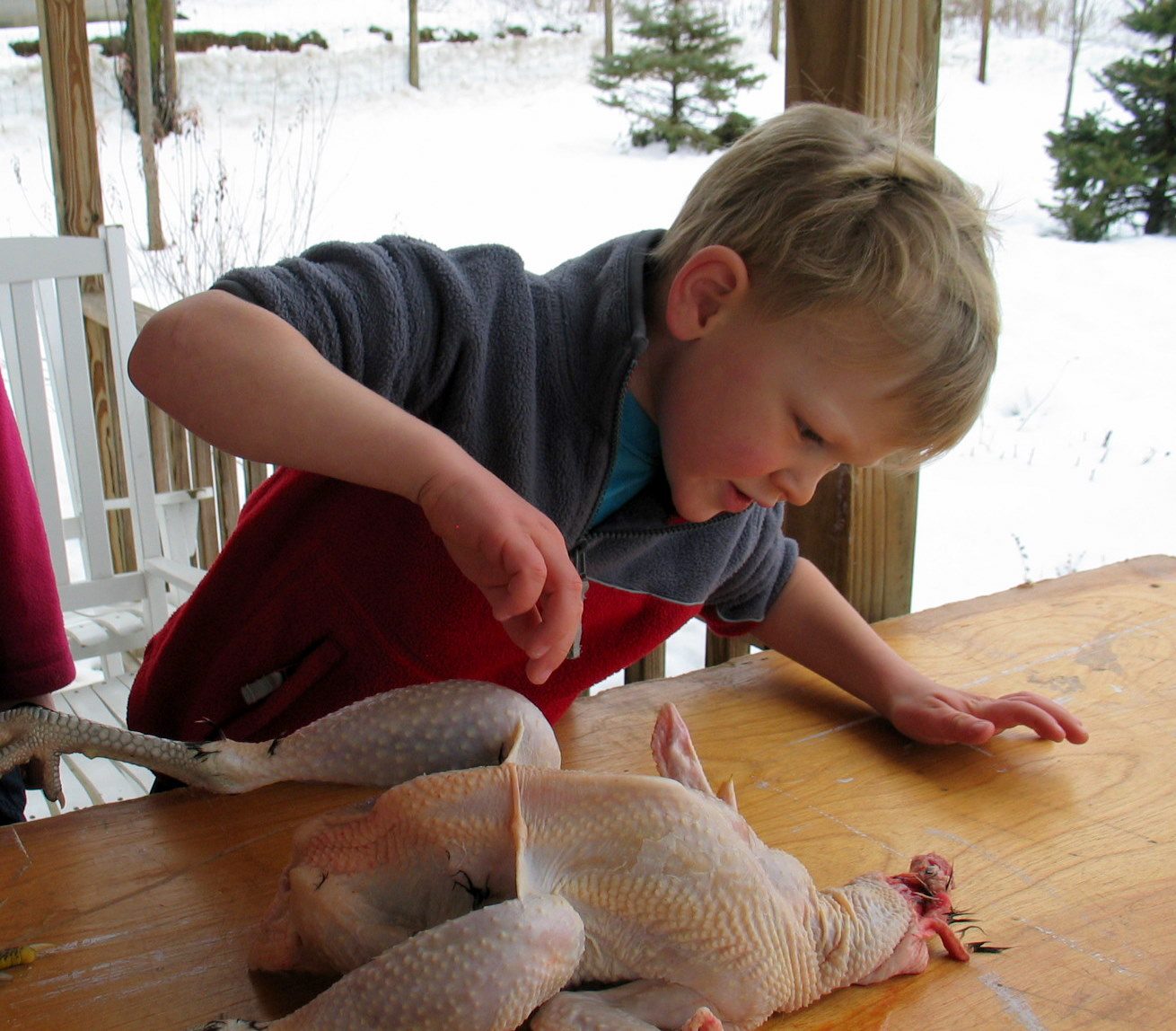 Then he figured out that he could make it run in place. Look, Mama, look! It’s running! 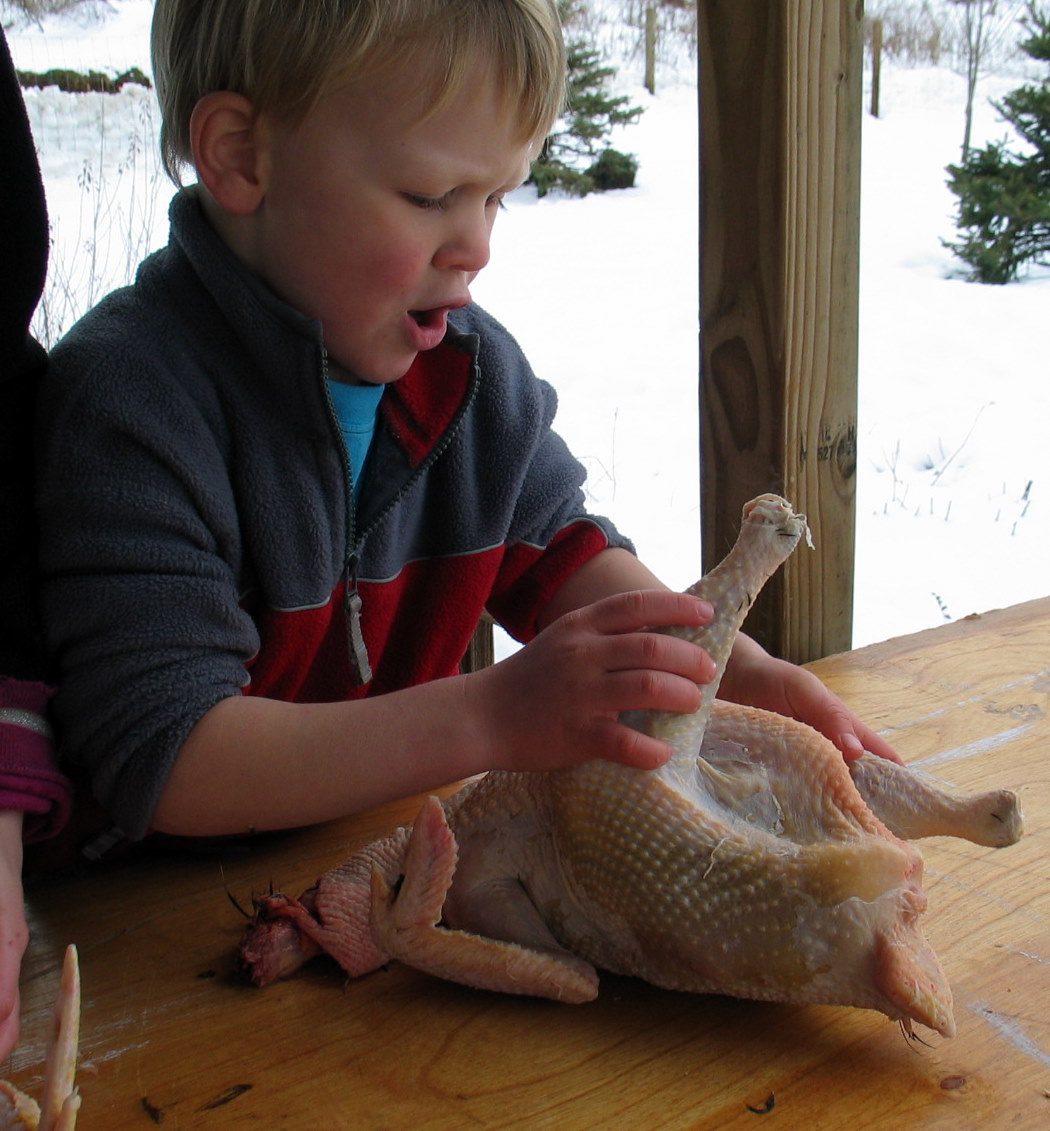 This—seeing children playing around with dead animals—might seem gruesome to some people, I realize, but I don’t see it that way at all. Take, for example, Laura and Mary. When their family did a hog butchering, they blew up the bladder (as in, inflated it, not exploded it) and turned it into a ball. So see, making dead chickens dance is a normal part of the butchering process, especially when kids are present.

(Speaking of hog butcherings, our neighbors are slaughtering their hogs on Saturday. Maybe I should go beg the bladders so my kids can have some balls to play with?)

The day drug on. I fed the kids lunch and put them down for rest time. Mr. Handsome kept at it, killing, defeathering, gutting. After a while he asked me to please come out and help. I sent Yo-Yo and Miss Beccaboo out instead. And then I went to the window and took a picture of the father-daughter quality time. 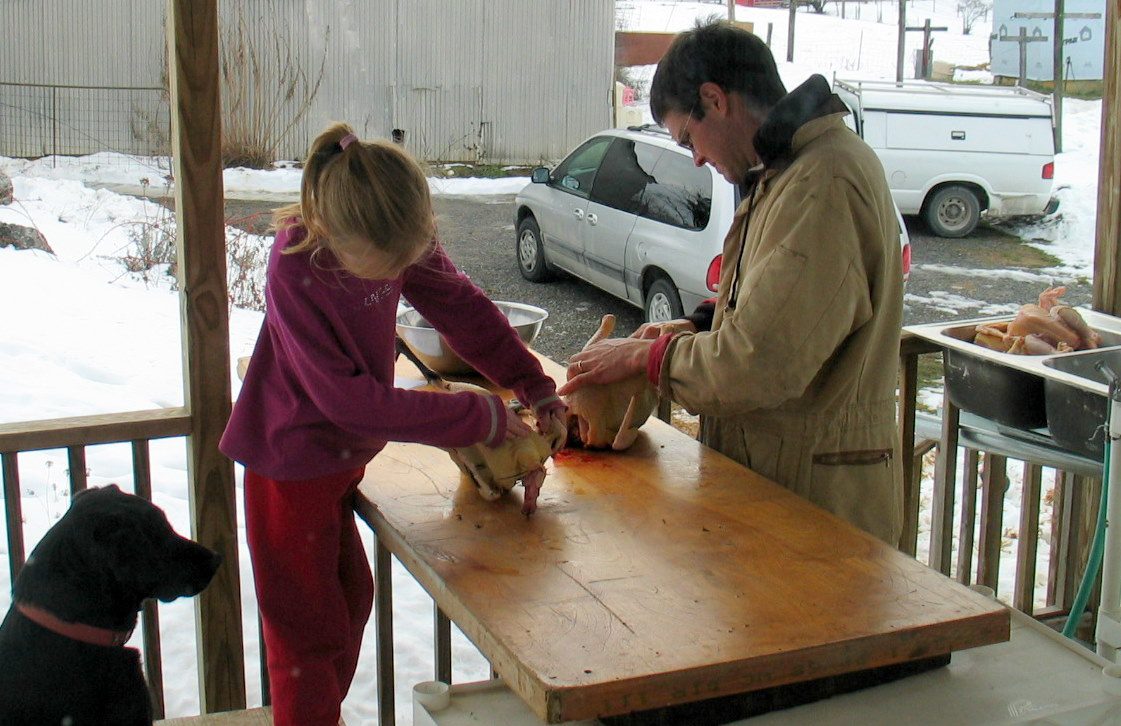 See, it’s good for me to not always be present. 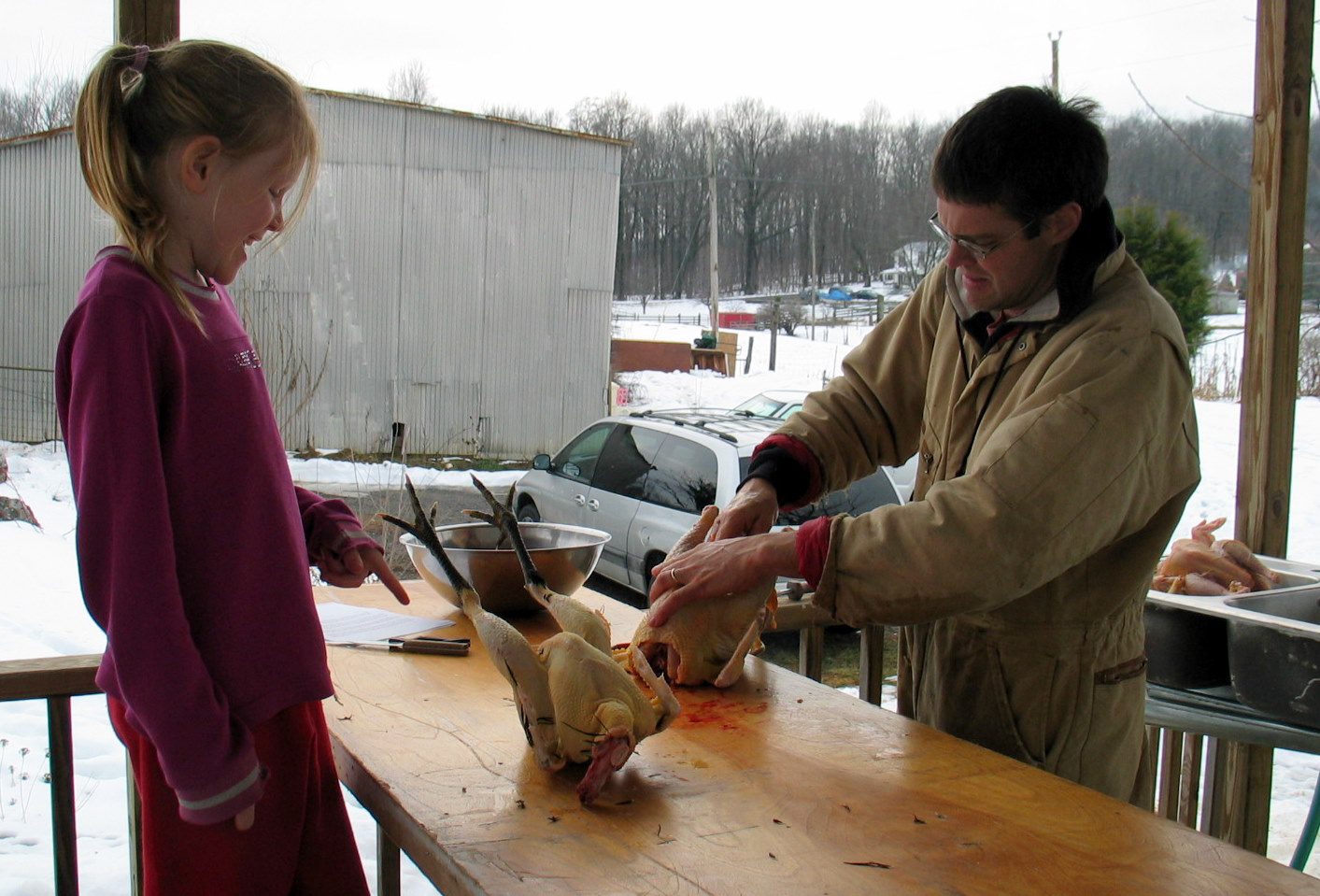 My absence allows the other family members’ relationships to blossom and grow. I know, I know, a more thoughtful mother you will never meet.

At the end of the day Mr. Handsome brought in the birds for me to pick over one last time. He hoisted the cooler onto the counter and cocked an eyebrow at me, daring me to fuss. I took the hint, zipped my lips, and got to work. These chickens were quite different from the last ones we butchered—these were lean, heavy, dark (meat-wise) … and hairy. It was impossible to get all the hair off some of them (maybe because they were already chilled?), so I ended up skinning about half of them. And then I popped them into bags and Mr. Handsome ran them down to the freezer.

We still have lots of chicken from the last butchering day, so our winter diet will be a bit chicken-centric—expect plenty of yummy chicken recipes in the near future.

About One Year Ago: Lentil-Sausage Soup