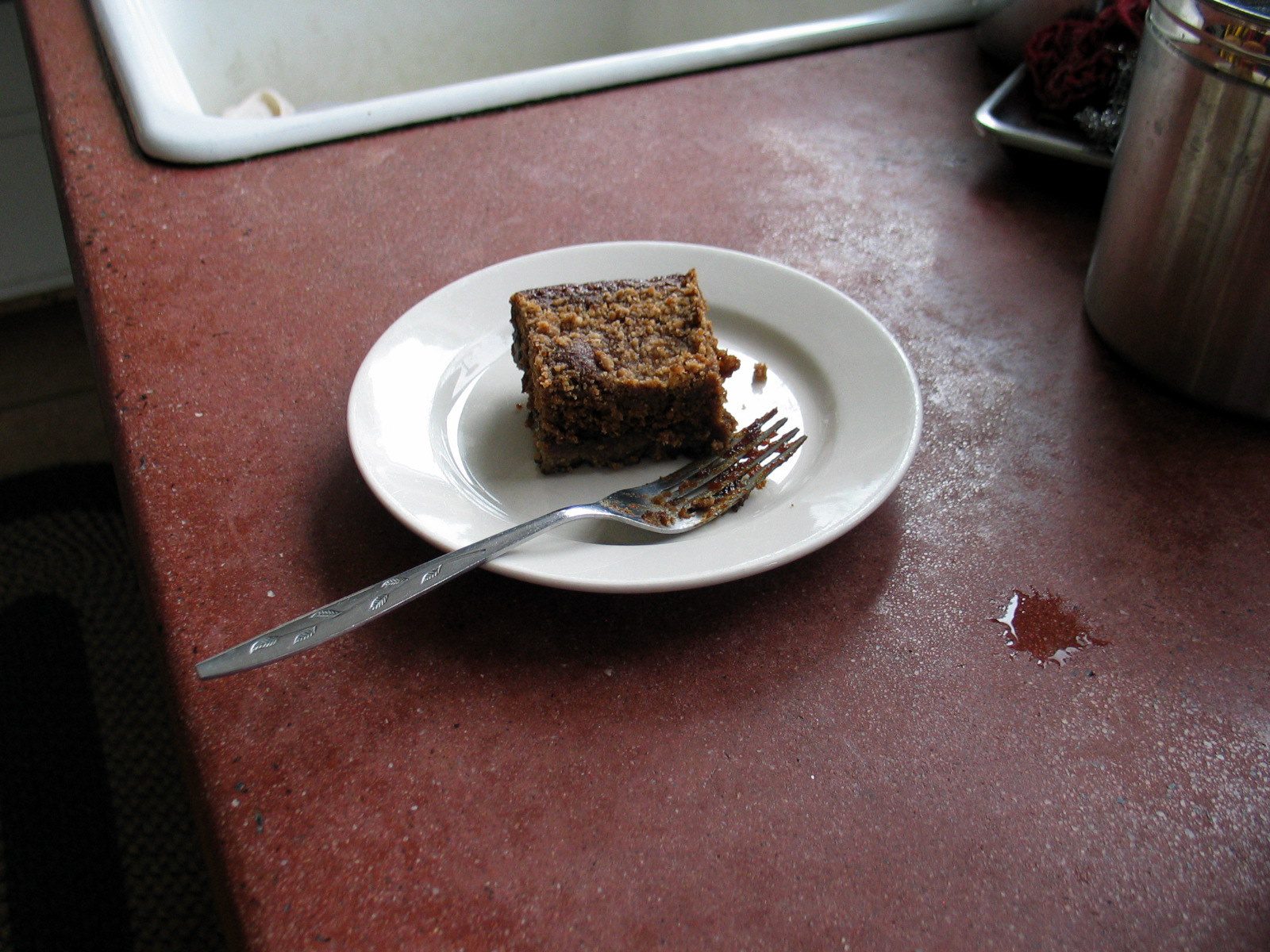 I am Mennonite. My grandfather was a straight-laced Mennonite Bishop, and my mother wore a covering (until some point in her wild college career when she decided to risk God’s wrath and toss it). I never wore a covering, but as a teenager I was baptized by the straight-laced Mennonite Grandpa, and I wrote a paper in highschool explaining why Mennonites don’t go to war (and then underwent an impromptu inquisition headed up by my teacher—my mother wrote an article about the experience—maybe I’ll reprint it here some time). I can play the Mennonite Game (or I would be able to if I could remember any names), and I can throw around Mennonite acronyms like it ain’t nobody’s business—proof: I attended/participated in MYF, EMU, VS, and MCC. (For the non Mennonite reading this, that would be Mennonite Youth Fellowship, Eastern Mennonite University, Voluntary Service, and Mennonite Central Committee, respectively.) And I love shoofly pie.

Mennonites have different opinions as to what a shoofly pie ought to be like. There have been many an intense conversation (but I’ll wager nobody’s come to blows over it because it’s not generally our custom to knock the daylights out of each other) over whether or not the pie ought to be wet or dry, dark or light. I hail from the wet-and-dark (but not too dark) camp. I like my pies to have noteworthy goo levels, as well as a pronounced molasses flavor. But those are just my preferences—I’ll eat and enjoy any shoofly pie.

My husband, Catholic that he is (or rather, was), does not like shoofly. This mortifies me, but I’ve tried to play it cool. I don’t bake shoofly pie all that often, and when I do and he only takes a small piece (shame! shame!), I try not to burn him at the stake for it. (Like his ancestors did to my ancestors, I might add.) (Though I don’t think they were being burned for eating too much shoofly pie.) But now we have children and I’ve discovered that if I don’t train my children up in the way of shoofly pie, nobody will. It is my duty to cultivate their Mennonite taste buds. 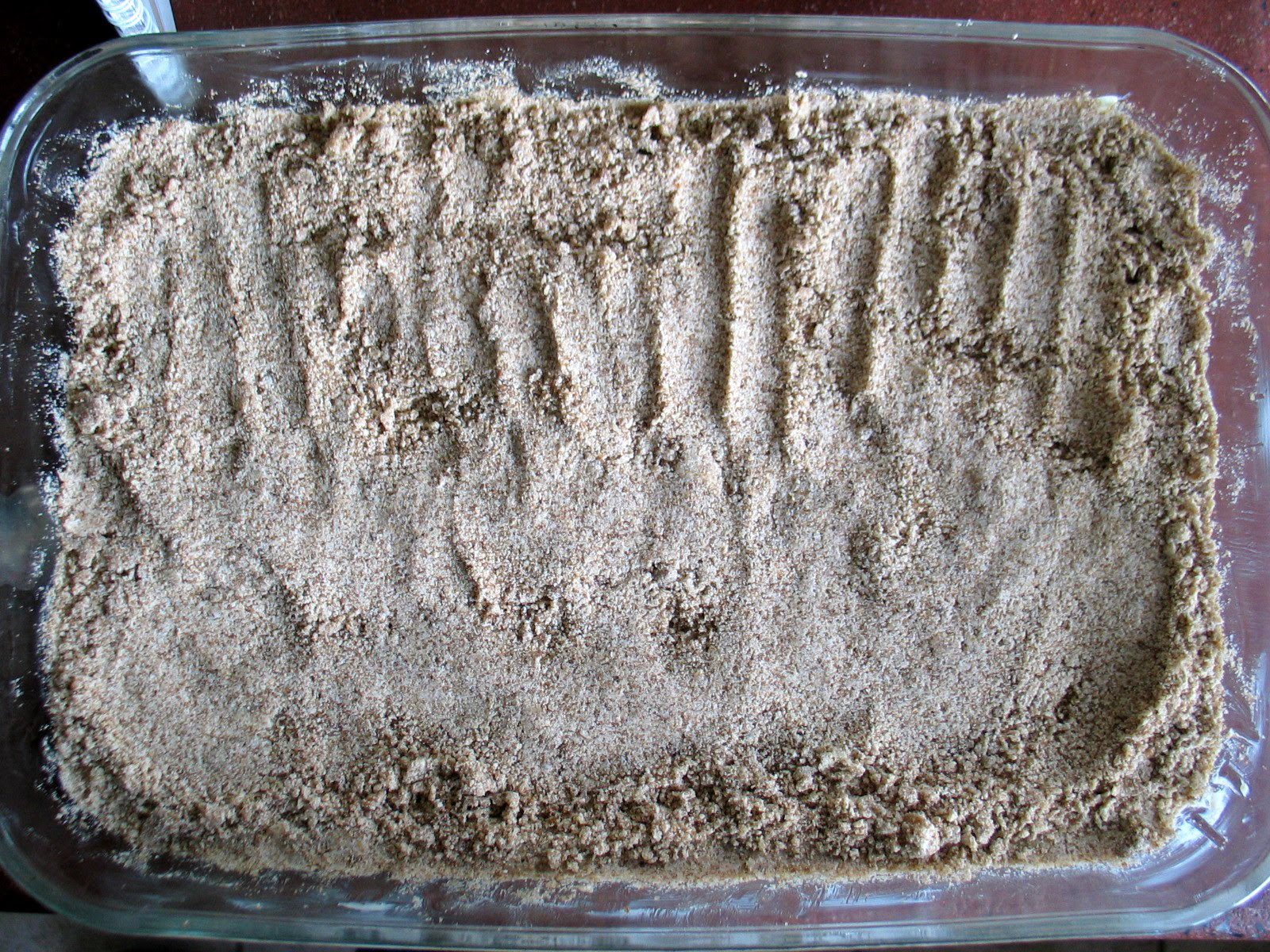 Here’s how the molasses training has gone down so far. We’ve got ginger cookies down pat. They like them in any form, soft and chewy, crisp and crinkly. But Mr. Handsome likes those, too, so the cookies don’t really count. Gingerbread is trickier; almost everyone will eat it, but they’re not crazy about it. But shoofly pie? Here’s where it gets dicey. Yo-Yo will eat it, Miss Beccaboo kind of will, Sweetsie won’t, and The Baby Nickel positively adores it (that’s my baby).

This past week I decided it was time to buckle down and solve the problem once and for all. I decided to approach the problem from a different angle—instead of shoofly pie, I’d try to snucker them in with shoofly cake. I made one recipe that touted itself as a shoofly cake but was nothing of the sort—it was just a gingerbread with crumbs on top. Good, but not the cake I was looking for. Then I called my brother, a shoofly afficionado, and after a bit of discussion involving two recipes he had in his files, plus some tweaking of my own, I created The Shoofly Cake Of My Dreams: buttery bottom crust that turns soft in spots and chewy crispy in others, a supremely gooey middle, and a moist, cake-y top. 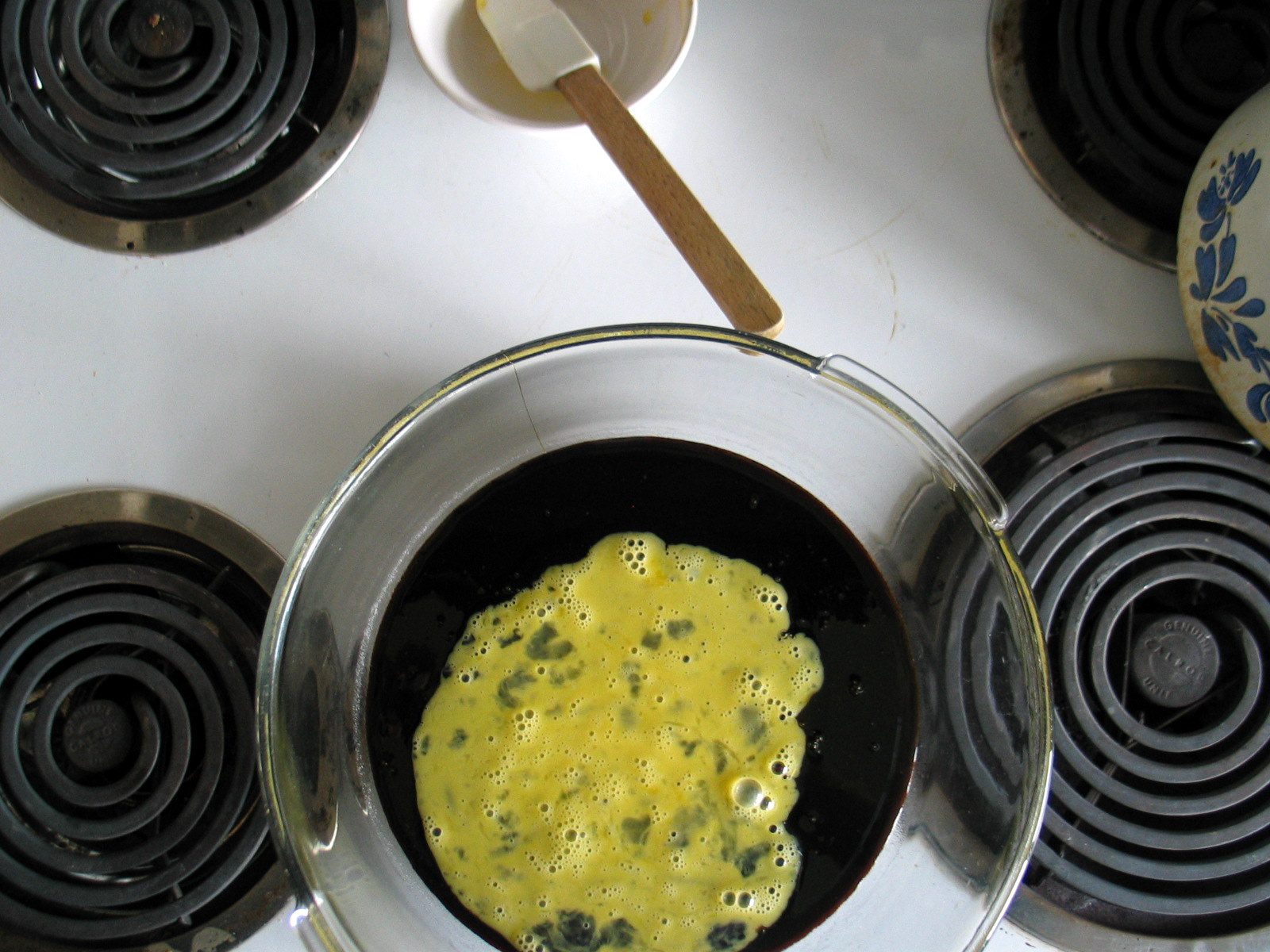 Since the recipe makes a big pan, it’s the perfect recipe for molasses indoctrination. My methods are rather traditional, with a touch of charismatic flair. I serve the cake after meals, with lots of whipped cream (that’s the traditional part). I make no fuss if they don’t like it, but I do allow for seconds (that’s still traditional, I think). I eat it voraciously, sighing and moaning with pleasure and smiling most favorably upon the other appreciative eaters (that’s the flair part).

So far my ploy hasn’t worked, but fear not, I am not dismayed. Opportunities for making and eating shoofly cake abound. I may gain a little extra padding in the process, but really, what’s a couple pounds when I’m winning souls for shoofly? In these cases, it’s important to keep my priorities straight.

And she shall rise up, a shoofly cake in one hand and a bowl of whipped cream in the other! And verily, they shall say to each other, We best partake of the cake, lest this woman stuff it in our faces. And they shall eat and be satisfied. And she shall show them mercy and make apple pie for a change of pace.

The end, and amen. 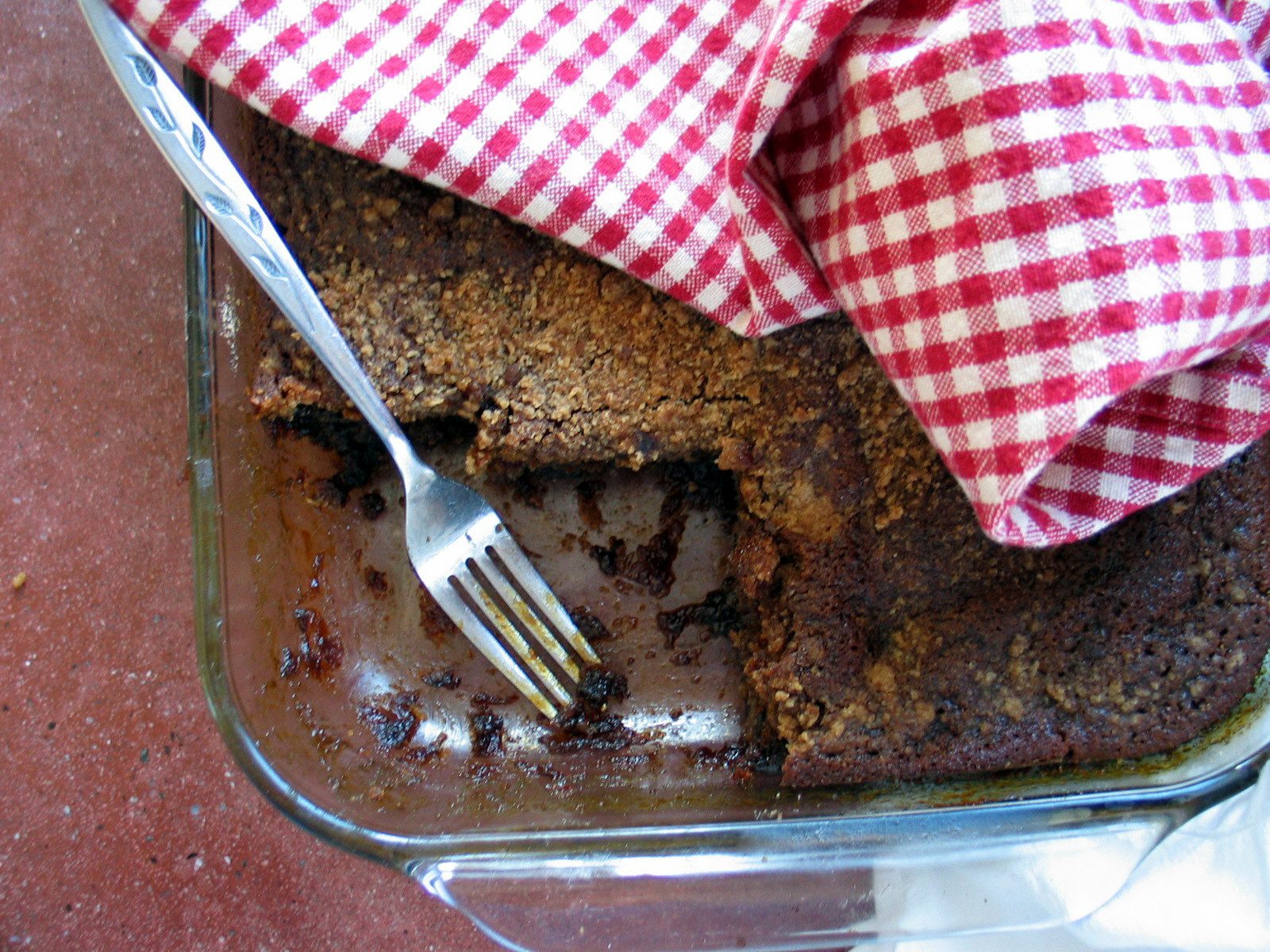 If you’ve never tasted shoofly, then you know what to do: make the cake, find out what you think, and check back in with your response. Pretty please? The curiosity is killing me. (If you’re overwhelmed by the sheer magnitude of the cake, just halve it. The only tricky part is the one egg bit, but if you turn the egg on its side and whack it quick with a sharp knife, it splits evenly down the middle—it’s an old Mennonite trick.) 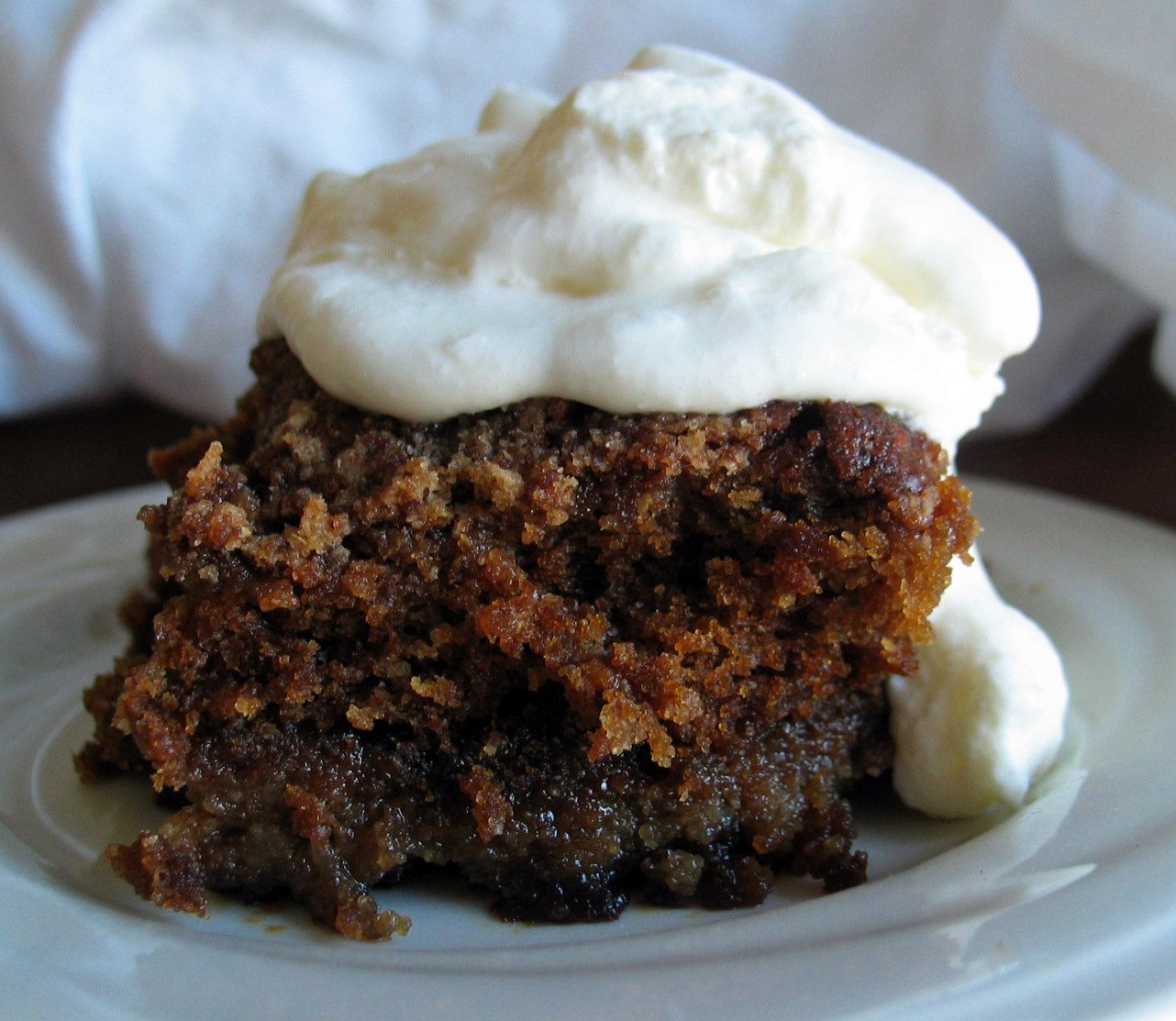 A note about the syrups: The recipe calls for two cups of syrup; I use half molasses and half of some other thick syrup. You can use different proportions—less molasses and more thick syrup, or the other way around—depending on how much of a love relationship you have with molasses. Do not use blackstrap molasses (unless you’re sure you want to).

Using your hands, blend together the butter, brown sugar, and flours till you have a sandy, crumbly mixture. Set aside two cups of the crumbs to use for the topping. Press the remaining crumbs firmly (but not too firmly—I pressed mine down fairly hard, then raked the uppermost part of the crust with a fork to loosen the crumbs back up and then lightly pressed them down again) into the bottom of a greased 9 x 13 pan.

Thoroughly combine the molasses, syrup, and beaten egg. Add the boiling water, salt, and baking soda and stir well. Pour the liquid mixture over the crust. Sprinkle the reserved crumbs over top.

Bake the cake at 350 degrees for 40-45 minutes. Because the bottom part remains gooey, it does no good to check it with a toothpick—you’ll know it’s done when the top is set and the cake is pulling away from the edges of the pan just a bit.

Serve warm or at room temperature, with plenty of whipped cream.

About one year ago: Nana’s Anise Biscotti