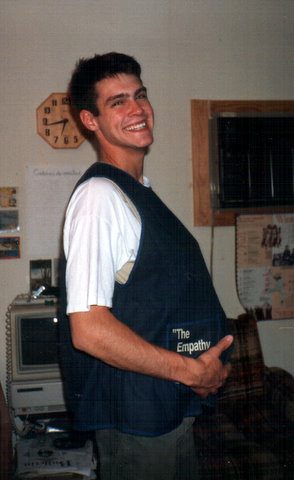 Cookie Baker Lynn gave me a sweet little award, but sadly, I don’t know enough computer mechanics to fetch the box of pink cupcakes and post it here. But that’s okay; I’ve learned to function despite my limitations. I can still play the game.

I don’t usually play games (board, pass-the-recipe, or otherwise), but for some reason this one caught my attention. I think it’s because after I get through telling you about some of my favorite things (hum along now: raindrops on roses and whiskers on kittens/crisp apple strudel and warm woolen mittens) (I think I garbled those lyrics), I get to tell you about some of my favorite blogs—blogs that make me smile and think and be a better person (not necessary all at the same time). Then those tagged people can, if they chose, follow suit, and in this way we waltz Maria-style through the blogosphere.

So here we go. My ten favorite things, in no particular order:

1. Mr. Handsome’s smile. It’s dashing and lights up the room and he’s kind of stingy about flashing it which makes it all the more special (though I think it would still be special if he chose to beam me with it all day long). 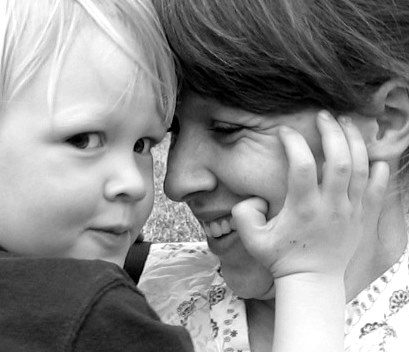 3. My baby’s cheek-pats and lip-smooshing kisses (when they aren’t overdone).

4. The relief that comes after finishing dread jobs, such as window washing, sorting kids’ clothes, and wet mopping the floors.

5. Homebound dates with Mr. Handsome—when the kids go elsewhere and we have the house all to ourselves and can do projects, watch movies, and eat what we want, when we want.

7. Going on walks with my sister-in-law.

8. Good ol’ Mennonite four-part singing. For a joint Christmas service, the masterful song-leader had us sing the Hallelujah Chorus from Handel’s Messiah and suddenly all those ordinary people sounded so glorious that I thought they must’ve sprouted wing buds underneath their suit jackets and polyester blouses. Mr. Song Leader was a blast to watch, raising his hands in the air, fingers fluttering, to make us hold the notes extra long, and eyeballing certain people so they’d slide their voices up to the tippy, tippy, tippy-top of the scale.

9. Getting comments on this little blog.

And now, for the fun part: bloggy friends who inspire, encourage, and delight me. Again, in no particular order.

Life in Transition: Sarah is Mr. Handsome’s older sister. He adores her and makes it no secret that he wishes I were more like her—adventurous, relaxed, and a self-starter. Sarah is the type of person who paints the living room of her mother’s house with a two-year-old and six-month-old twins underfoot—and laughs about it. She has been known to travel cross-country with five kids by herself … multiple times. (She reports that earplugs and graham crackers play a key role.) She’s one of the most accepting, least presumptuous people I know. After being with her for a few days, I find that I lighten up more, start new projects, and spend more time with my children. She doesn’t update her blog that often, but when she does, I’m inspired.

Jumping Off the Food Chain One Box at a Time: Mavis, otherwise known (by me, in my head) as The Dot-Dot-Dot Lady, daily pours out the details of her high-energy existence. She’s forever setting new challenges for herself (walk-a-thon, grow 2000 pounds of vegetables, figure out more ways to annoy her husband), and has an unhealthy obsession with formal wear. I love her.

Breed ‘Em and Weep: Jennifer writes candidly and humorously (often at the same time) of her divorce and bipolar illness. An exceptional word craftswoman, she inspires me with her writing and brutal honesty.

ThyHandHathProvided: This is one of the few friends I call when I can’t take life anymore. She is sweet and gentle, but take note—there is nothing wishy-washy about her. Her blog is full of recipes, glimpses into their life as a homeschool family, tales from the garden and chicken butcherings, and right now she’s doing a spiffy giveaway. Even though we live only six miles from each other, our paths rarely cross, but this past Monday she invited me out to coffee (her treat) and we talked for four hours straight. Mr. Handsome called at 11:00 to find out where I was. Since I said I’d be home between 9 and 9:30, he had a right to be worried. When I got home I apologized and then lit into him, “You mean you waited a whole hour and a half before calling to see if I was okay?!” He grinned sheepishly, but quickly switched back to being the martyr: “I just sat in the chair, watching the road, waiting for the police to drive in…” Okay, okay! I’ll call next time!

Subsistence Pattern: Mr. H (another Mr. H!) and his wife work year-round, growing all the food they need. They’re forever trying new foods, or variations of the old standbys, and are currently storing oodles of potted plants in their basement—they bring up different pots at different times, give the plants good light for several days, and then pick the leaves to make incredible salads.

The Home Grown Journal: Mama Pea lives in the boonies with the wolves … and her husband. She quilts and grows things and lines her make-up drawer with bright red paper to elevate her mood. You need to do things like that when you live in brr-Minnesota.

Seven Spoons: Tara takes beautiful pictures, writes well, and gave me my new favorite popcorn recipe for which I am eternally grateful. (Though snorting cayenne pepper is not a good idea. I accidentally did that last night when I was fixing the popcorn to go with our shoot-‘em-up movie, and then immediately started batting at my nose with the back of my hand, like a dog, I realized, so I added a couple snorts and head shakes for good measure and then busted up laughing.)

Clover Lane: Sarah, a mother of five, is a crafty, industrious, thoughtful, insightful, opinionated woman living in a big white house on a clover lane somewhere. Half the time (okay, not quite that often) I don’t even agree with what she says, but I love that she thinks and writes about more than, oh, I don’t know, sniffing cayenne powder.

Dinner with Julie: I knew it was time to switch from lurker status to follower status when I kept clicking on her site to see if she had written anything lately. This is one of those ladies that blows my mind with all her productivity. She’s gifted, too, with both words and food. And lately she’s become more vulnerable than ever before.

Paprikahead: Rosanna writes sparingly, beautifully, about the food she creates, foods that (sometimes) take a long time to make because she employs old-fashioned methods. She has a cookbook coming out soon, so keep your eyes peeled.

That’s ten, folks, so my job is done. Go on and visit my friends and then please do introduce me to yours. I got five hours sleep last night, it’s sleeting, and the kids are hacking their lungs out—I could use a cheery diversion.

About one year ago: Baked Brie