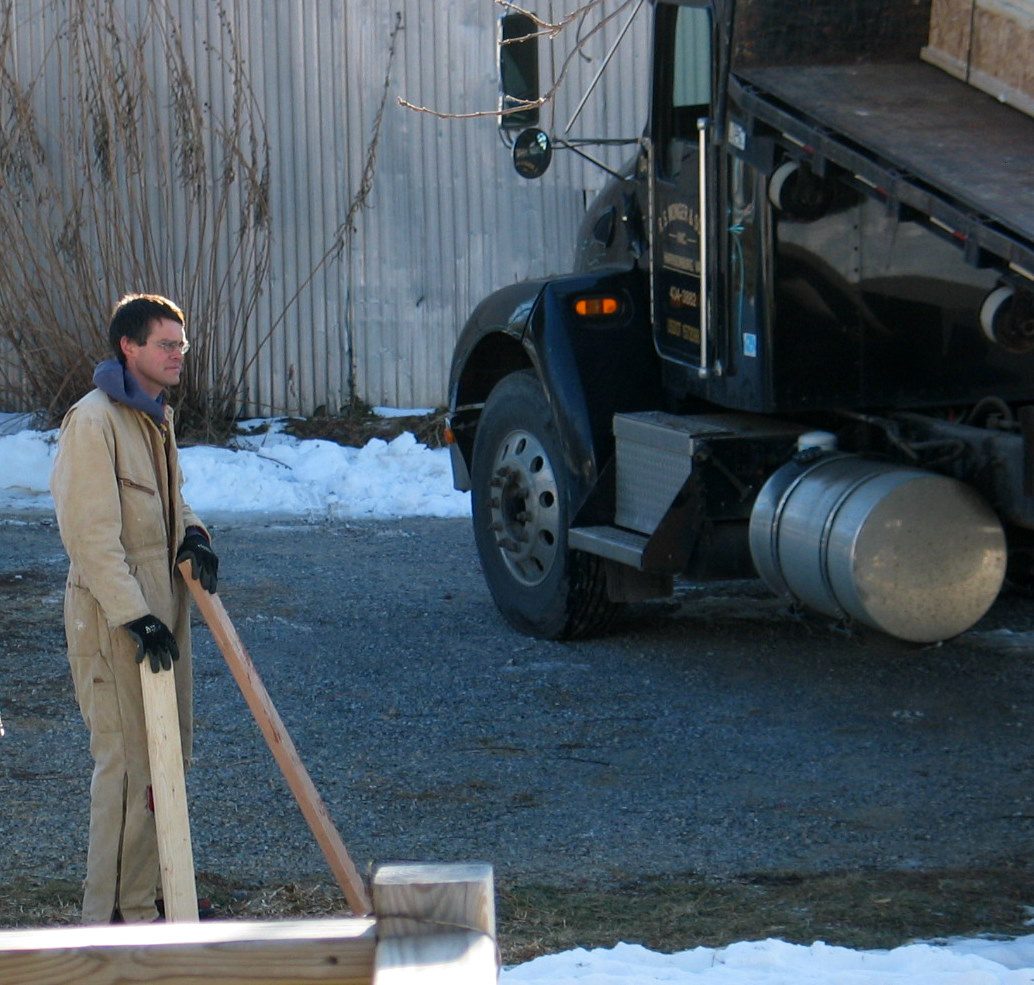 The barn really is going up; it’s just that, except for a jagged hole up high in the metal side of the barn, you would never know.

The other day another big truck came by. It dumped off a lot of big pieces of wood. I think they’re called beams or studs or frames. Wait a sec …. Hone-e-y? What were those large pieces of wood that got dumped off here before we went on our trip? I-joists? They’re 36 feet long? Okay, thanks. No, no one’s asking—I was just wondering.

So it was I-joists that got dumped off. Mr. Handsome oversaw the whole process. It was kind of slow, and involved lots of backing up, beeping, and caveman-like grunts and whoas. I stayed on the deck and watched from behind my camera.

The kids didn’t even come running to look. Once you’ve seen one big load of wood, you’ve seen ‘em all. 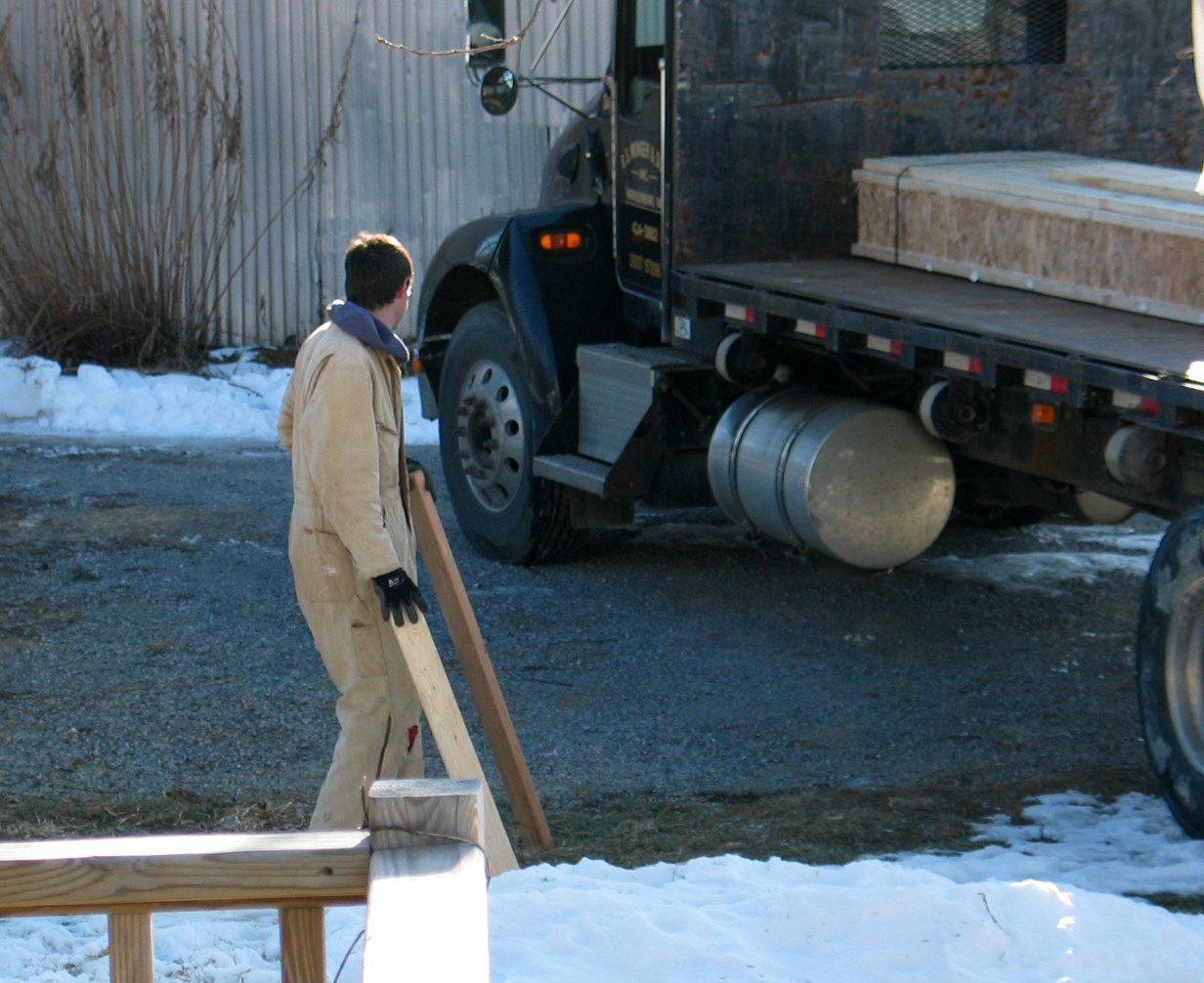 Just so you know, the sticks of wood that Mr. Handsome is brandishing? They were for in case the driver made one false move. Mr. Handsome was fully prepared to fly at him, and deck him upside the head. 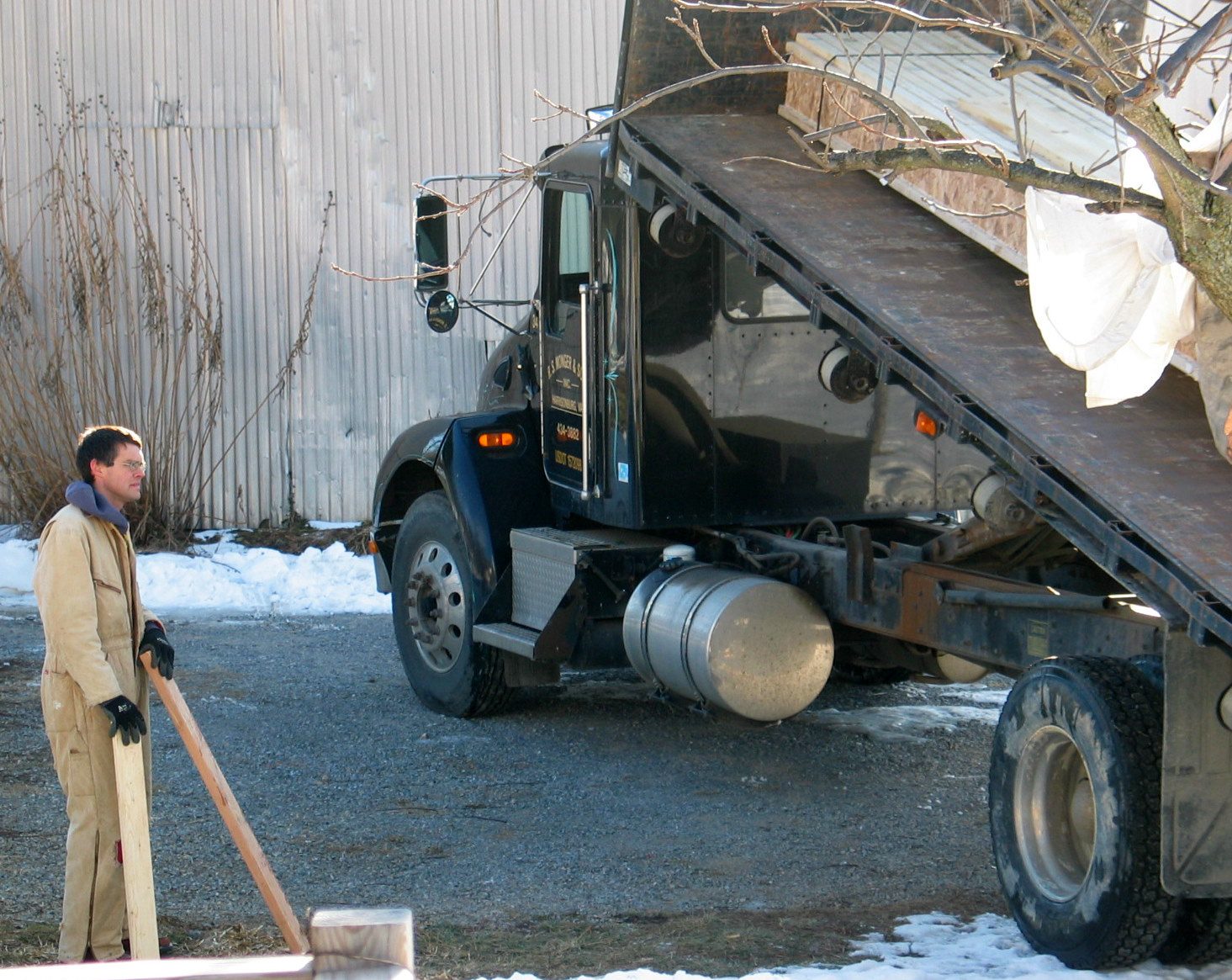 Just kidding. They were to put under the beams to keep them off the wet ground, but that was boring so I made up that little lie. I hope you’ll forgive me. 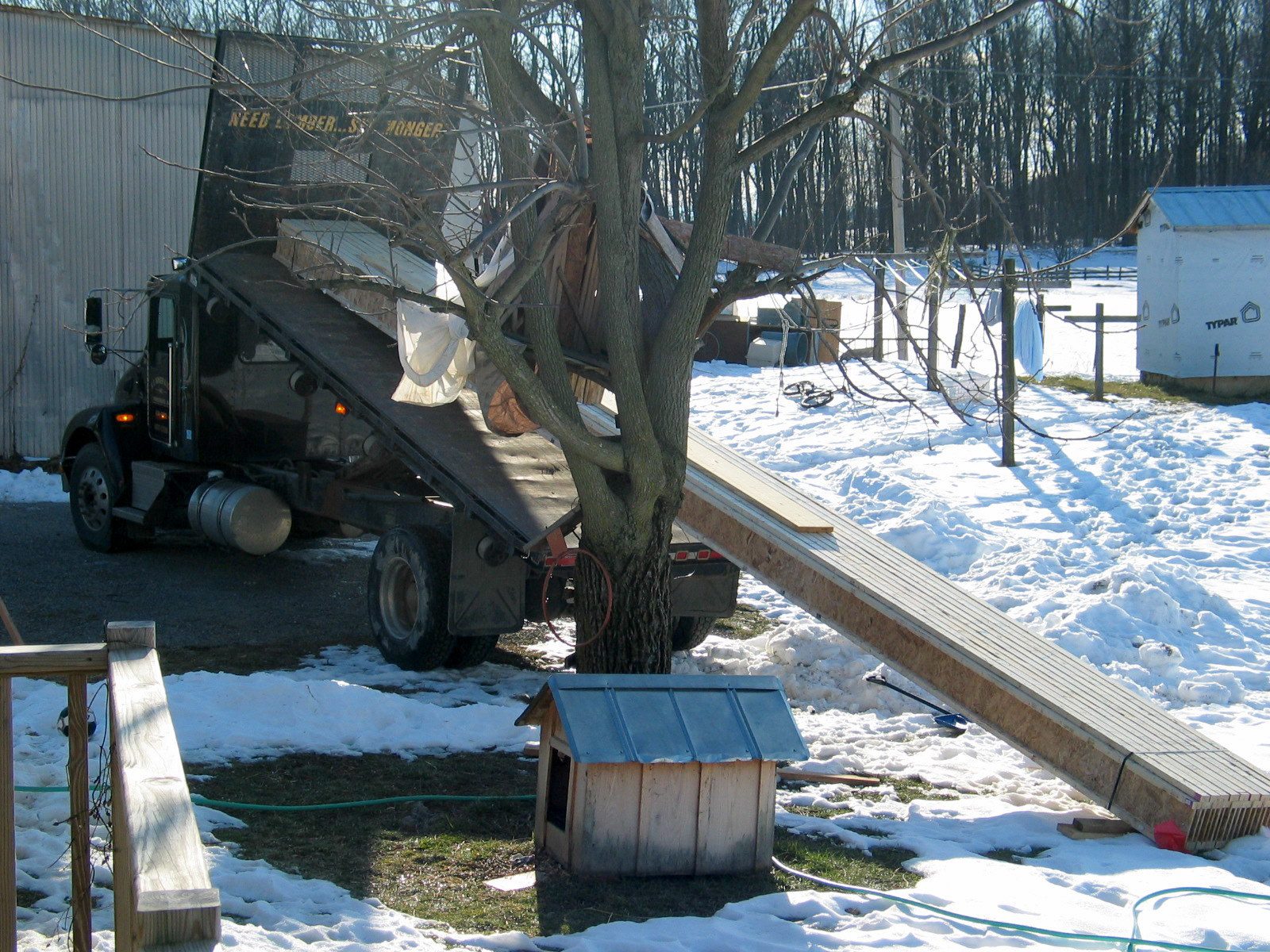 And really, Mr. Handsome didn’t have an angry bone in his body at delivery time. He was positively glowing, so excited was he over that bit of over-sized kindling. When he walked in the door afterwards, I took one look at him, slapped my hand over my eyes, and screeched “I need sunglasses!”

“Oh, be quiet,” Mr. Handsome said, all gruff and tough-like. And then he grinned and about split his face in half. He’s so dang cute!

The wood sat in the yard for a couple days until Mr. Handsome decided that he better get it under cover before we went on our trip so he spent one entire morning shoving beams into the barn through a little hole that he hacked in the side up the barn, a-way up high.

They’re big sticks of wood, so Yo-Yo and Miss Beccaboo had to help. It involved lots of lifting, holding, climbing, and shoving. Sometimes Mr. Handsome stayed outside on the ladder and waited while the kids sprinted around to the inside… 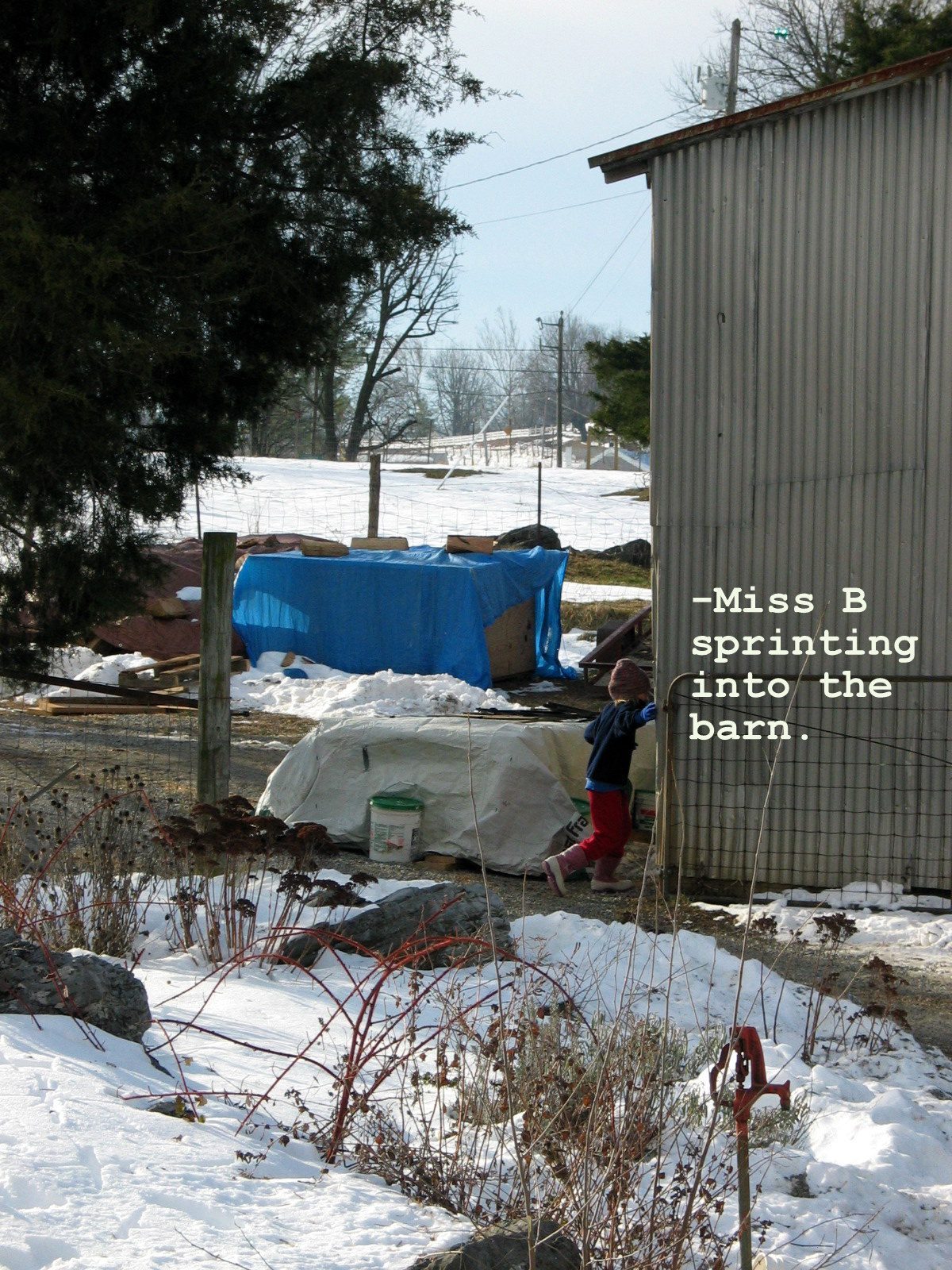 where they climbed the shelving units till they got to the top, up high there, close to the roof…. 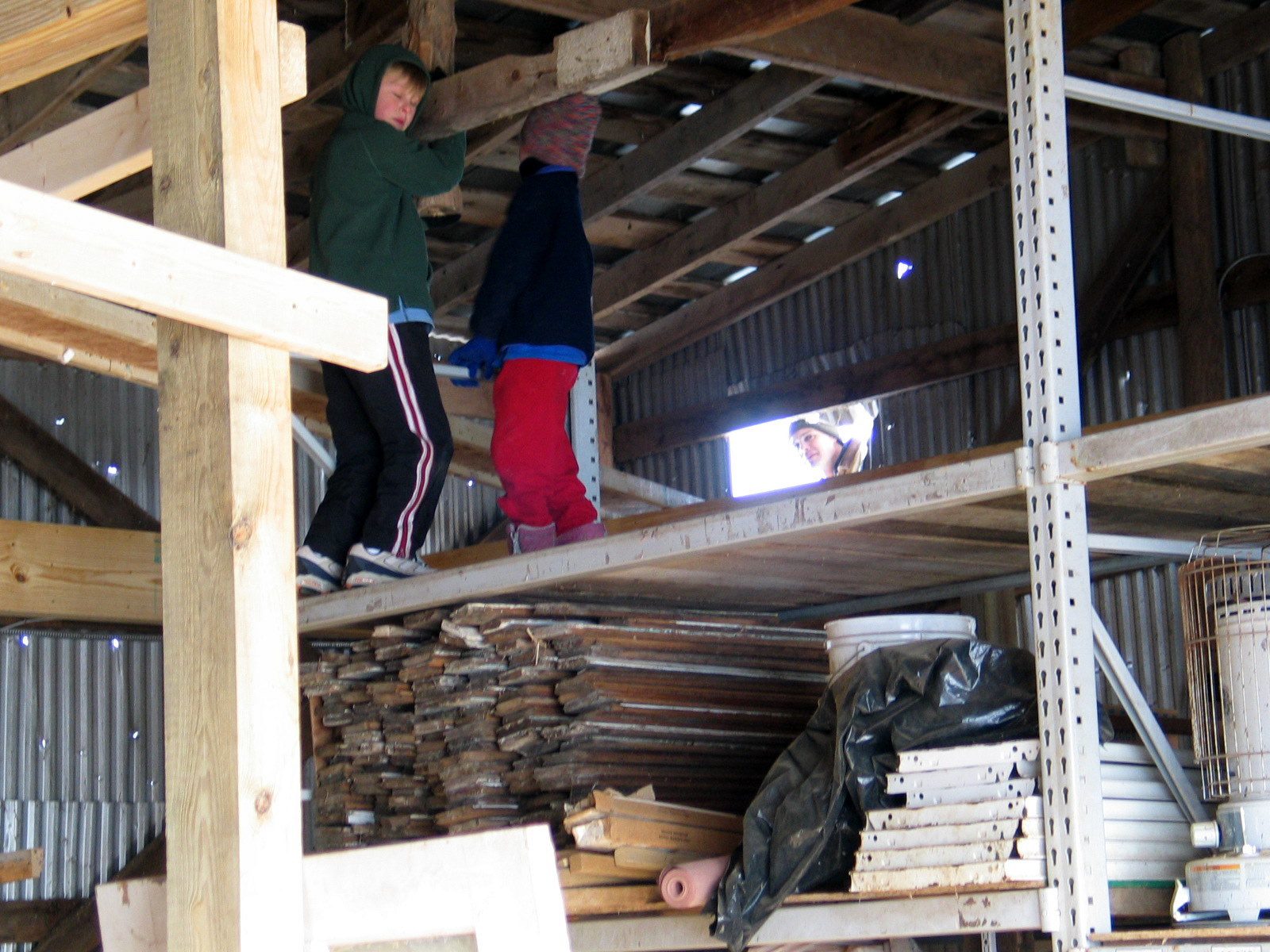 and then he fed the beam in through the hole to them so they could nestle it into its resting spot. 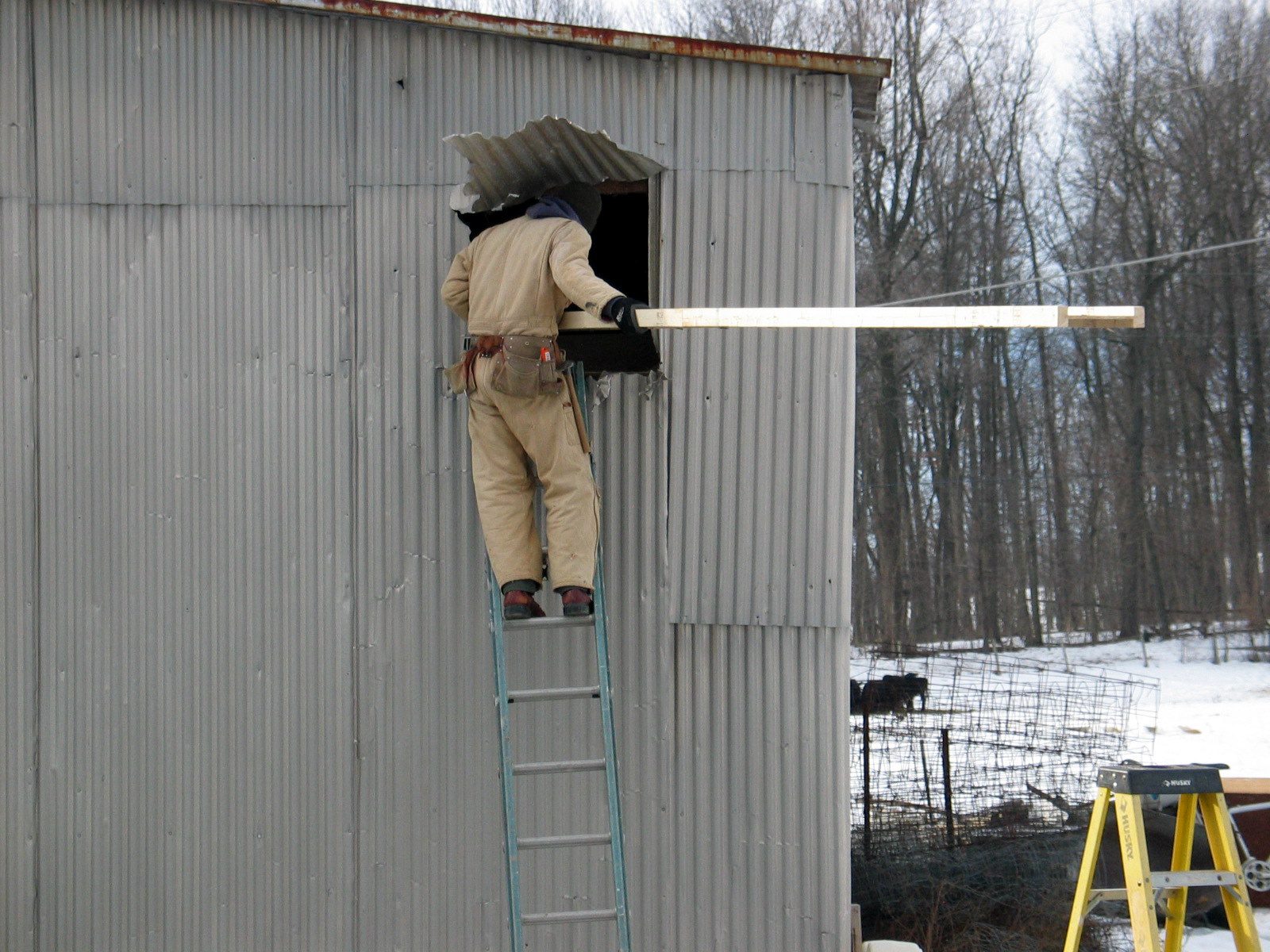 Other times they all worked together from the outside, Mr. Handsome on the ladder closest to the barn and the kids at the bottom end of the beam, pushing it up to him. When they got into that position, the kids didn’t have any other choice but to stay put and push. If they got tired and dropped the beam, it would smash their toes and they knew that. They’re smart kids that way. But they’re smart kids in other ways, too. They discovered that if they bleated pitifully—Papa, hurry, hurry, HURRY!—he would come save them. 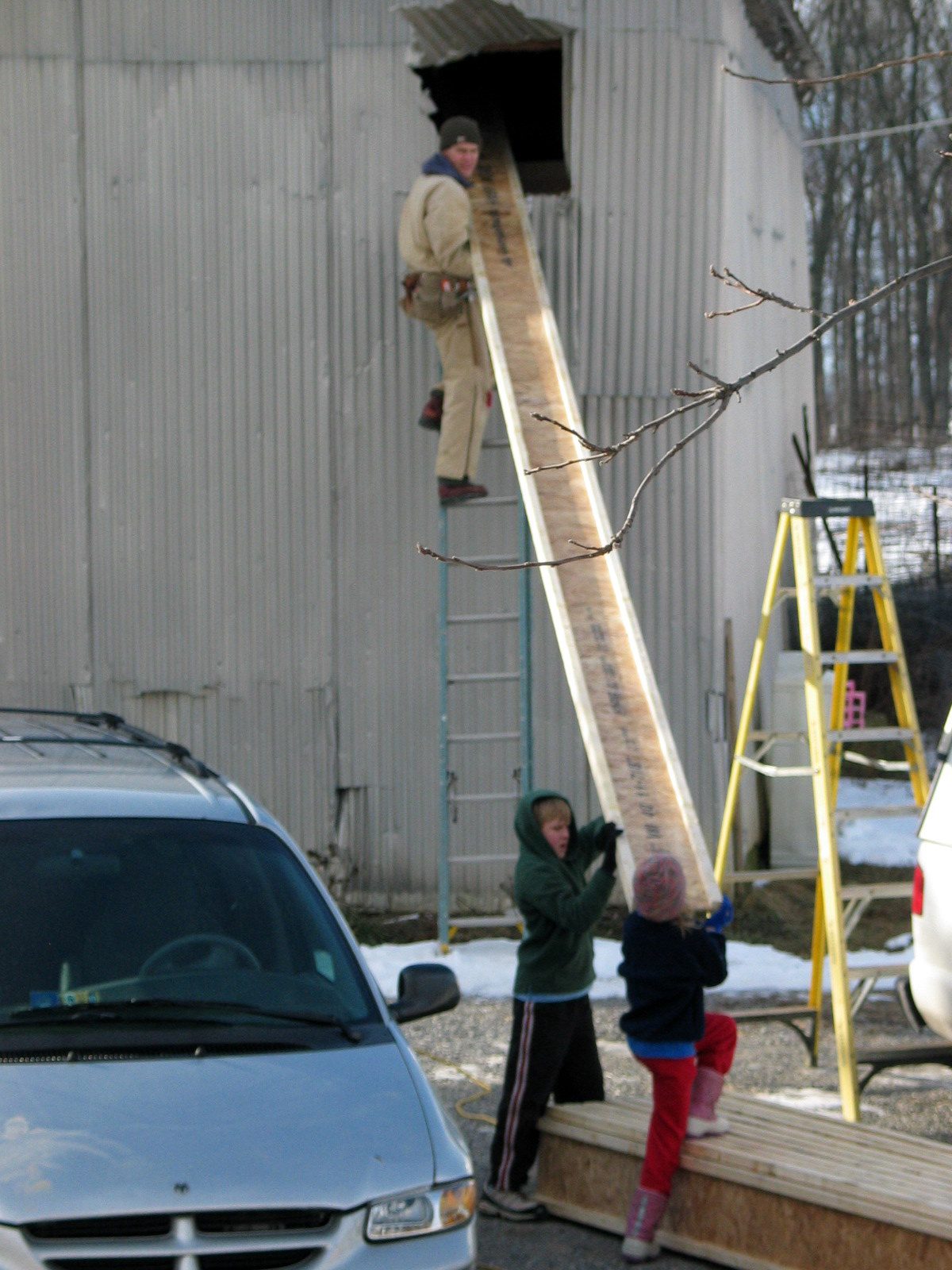 We can’t do it! Our hands are slipping! 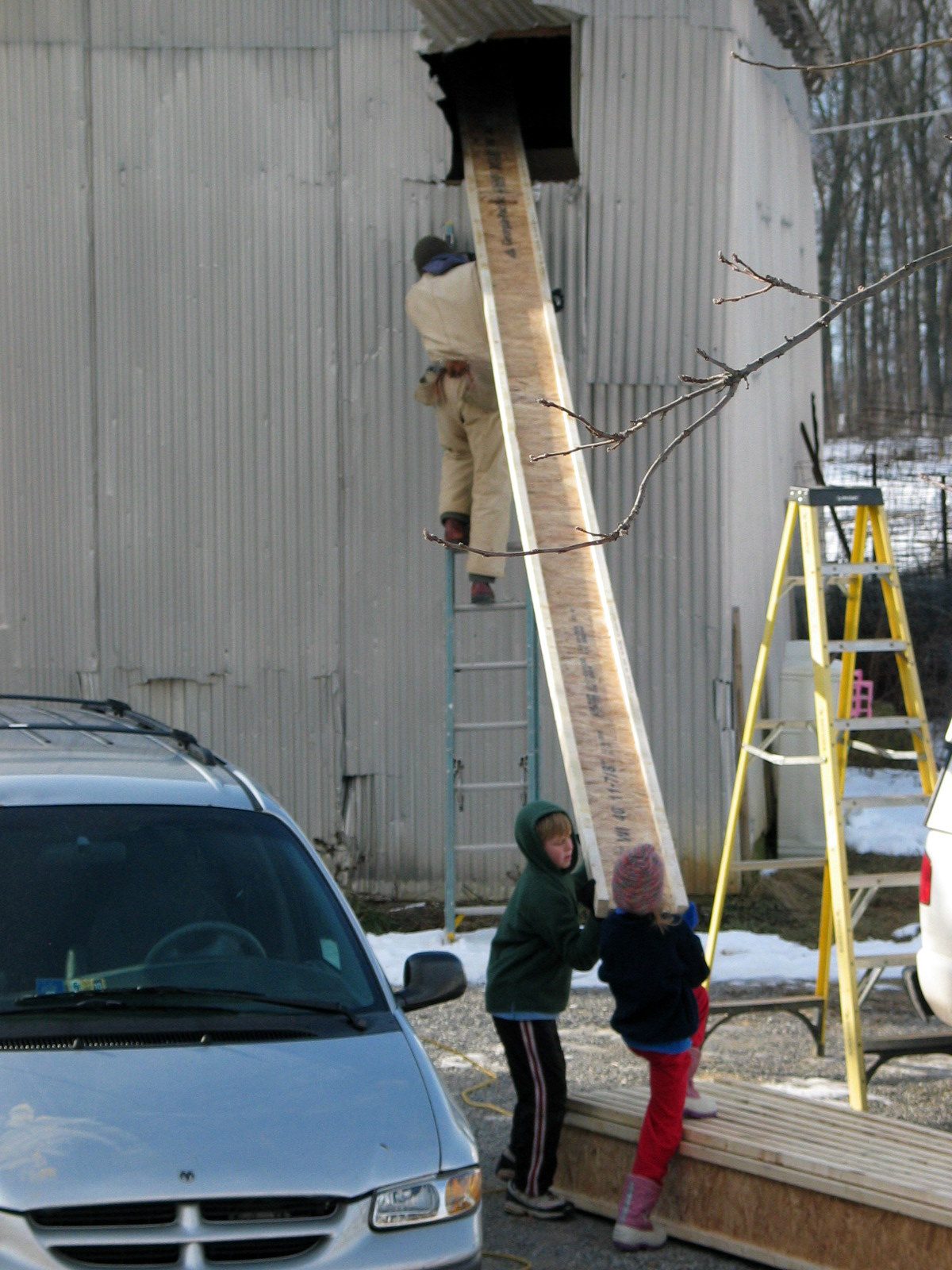 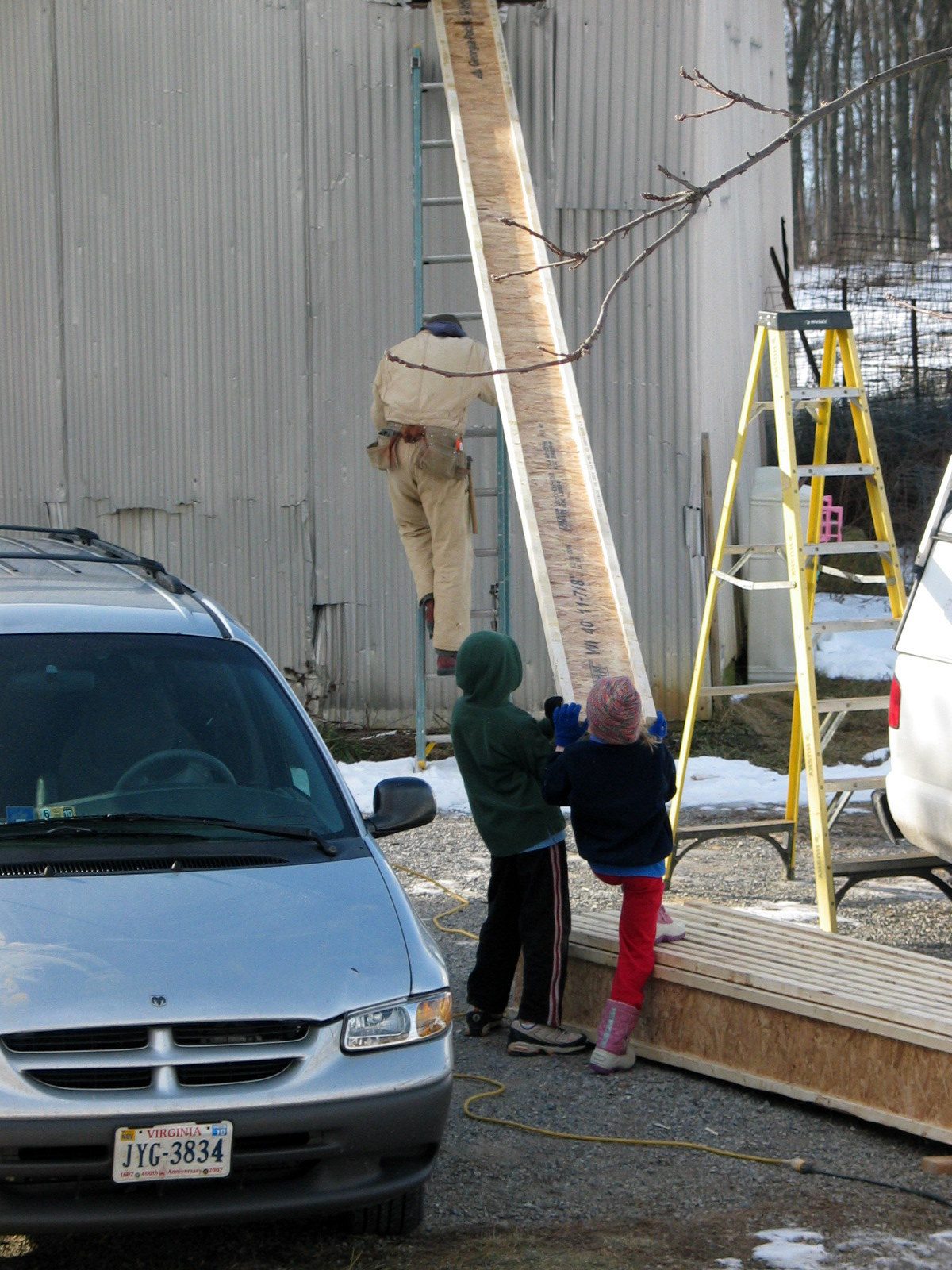 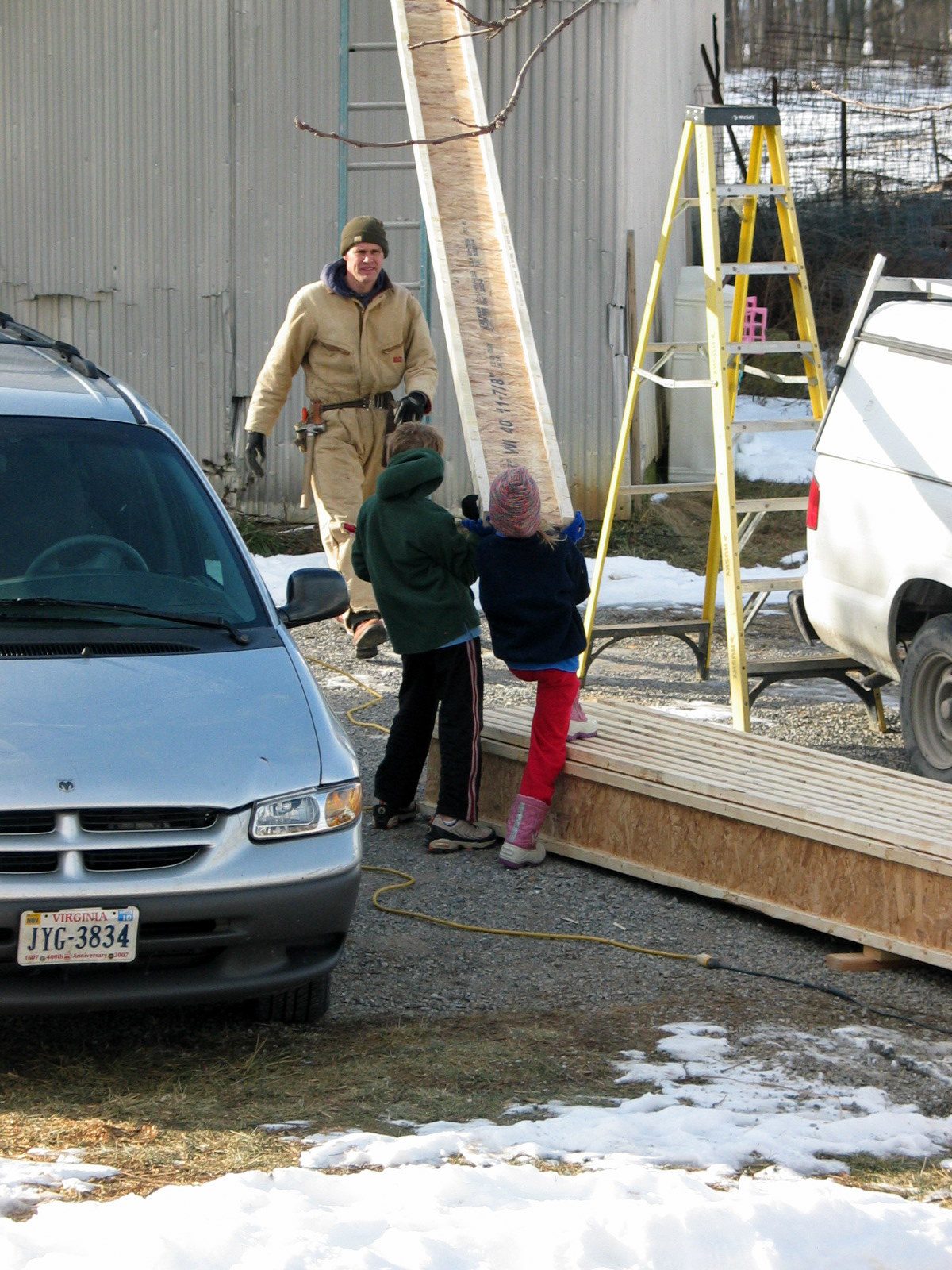 Alright, I have it. You can let go now. 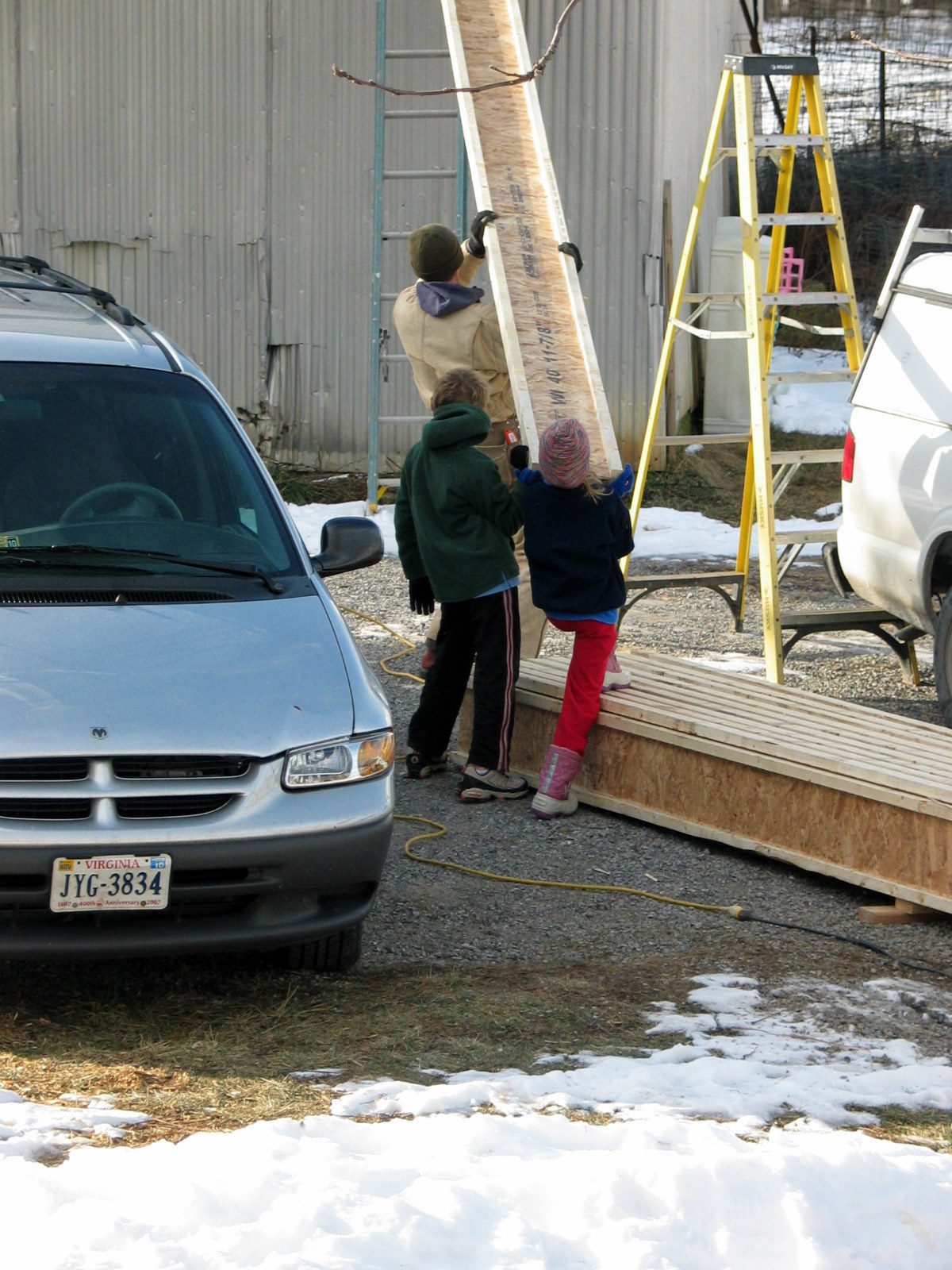 And all the while I was thinking, Let my kiddies’ piggies survive this, please.

Aah! Yikes! THAT kid isn’t supposed to be up there! 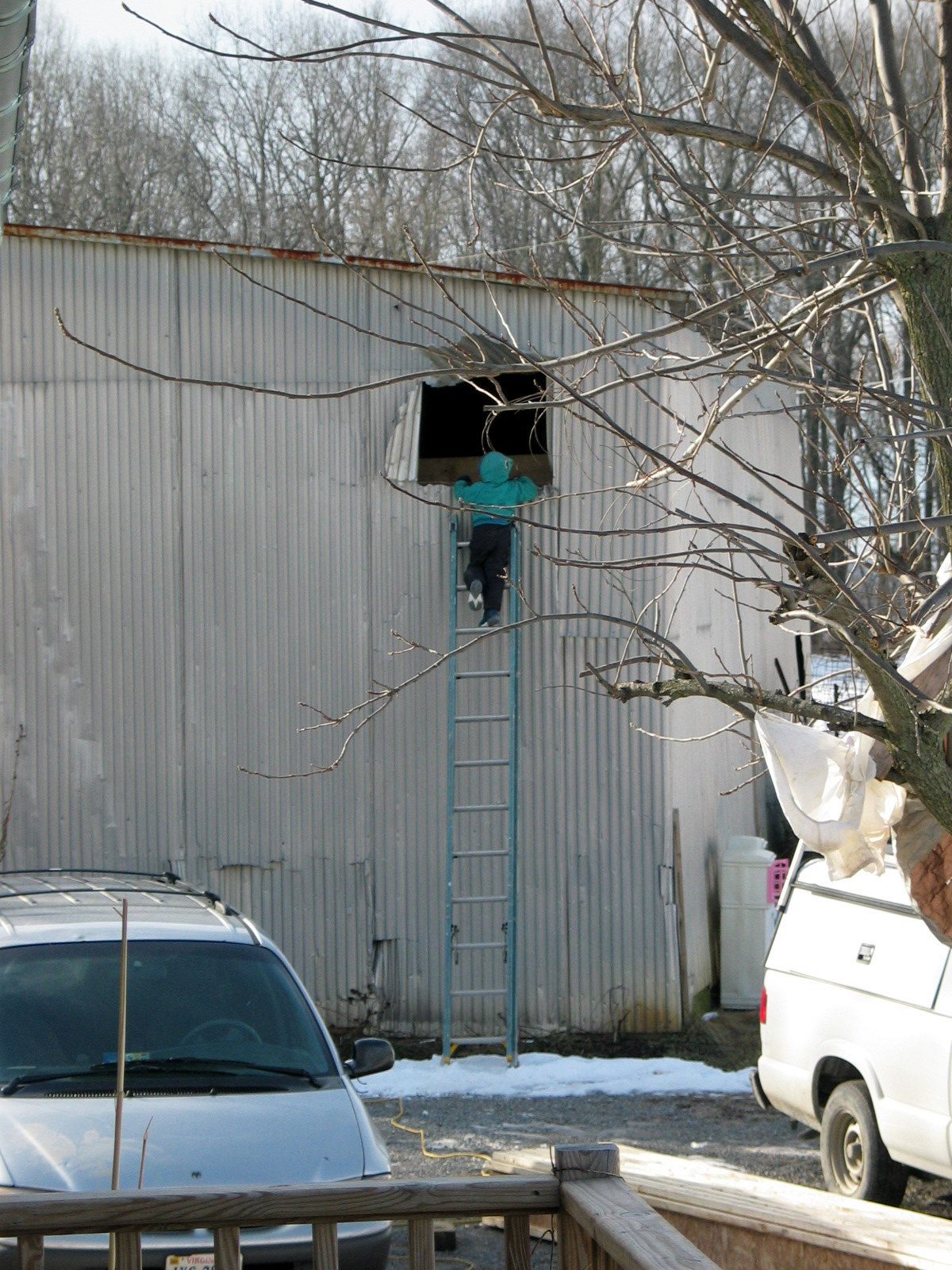 Yoo-hoo! Anyone in there know what’s going on outside? Anyone??? SOMEBODY GET THAT KID! 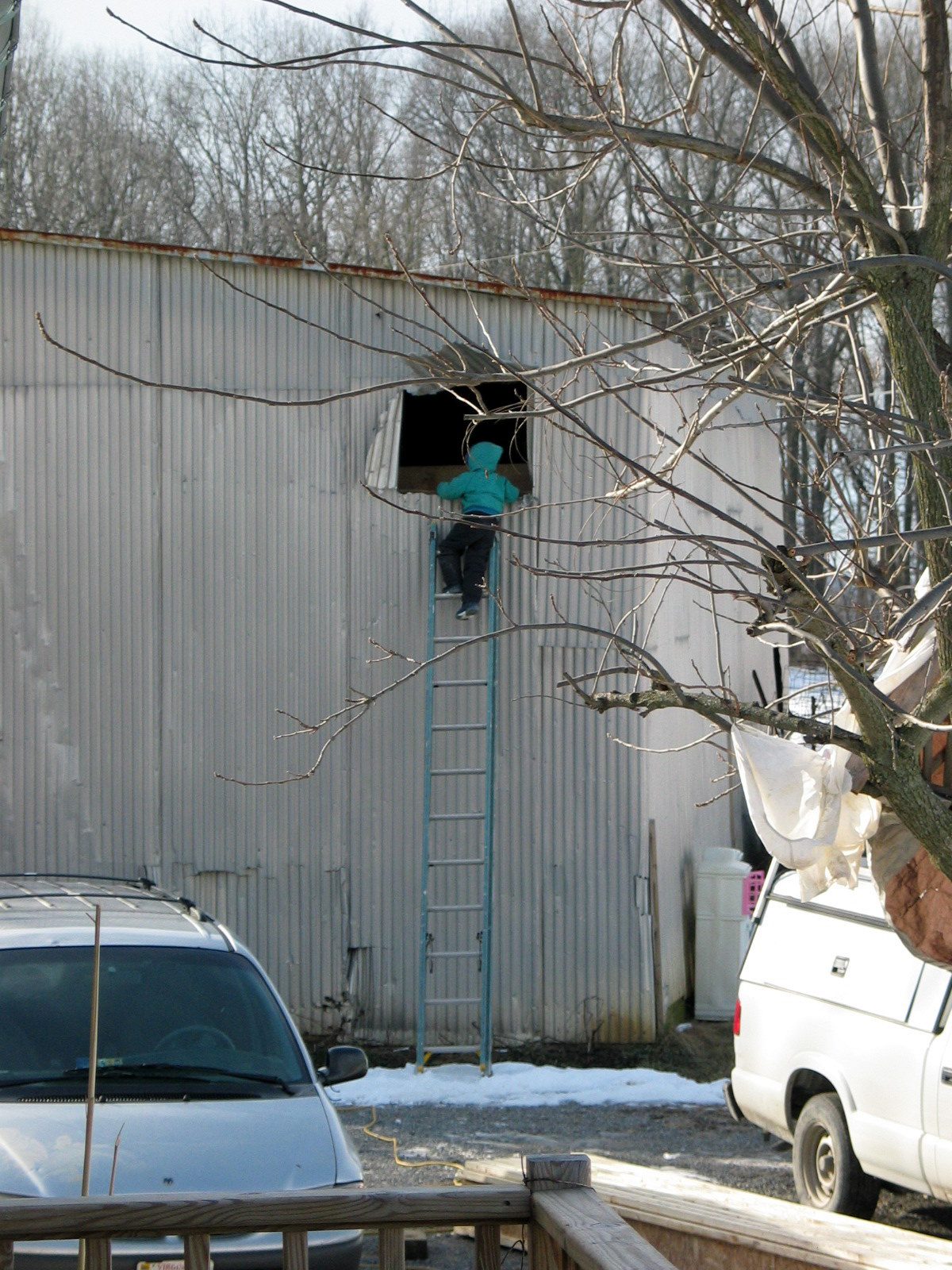 Truth be told, I didn’t say anything. I just ran inside quick to grab the camera. By the time I got back, Mr. Handsome was already bellowing at Nickel to get down off that ladder right this very minute. I clicked fast.

They worked all morning long. Mr. Handsome said he would’ve been in a real fix without the kids’ help. 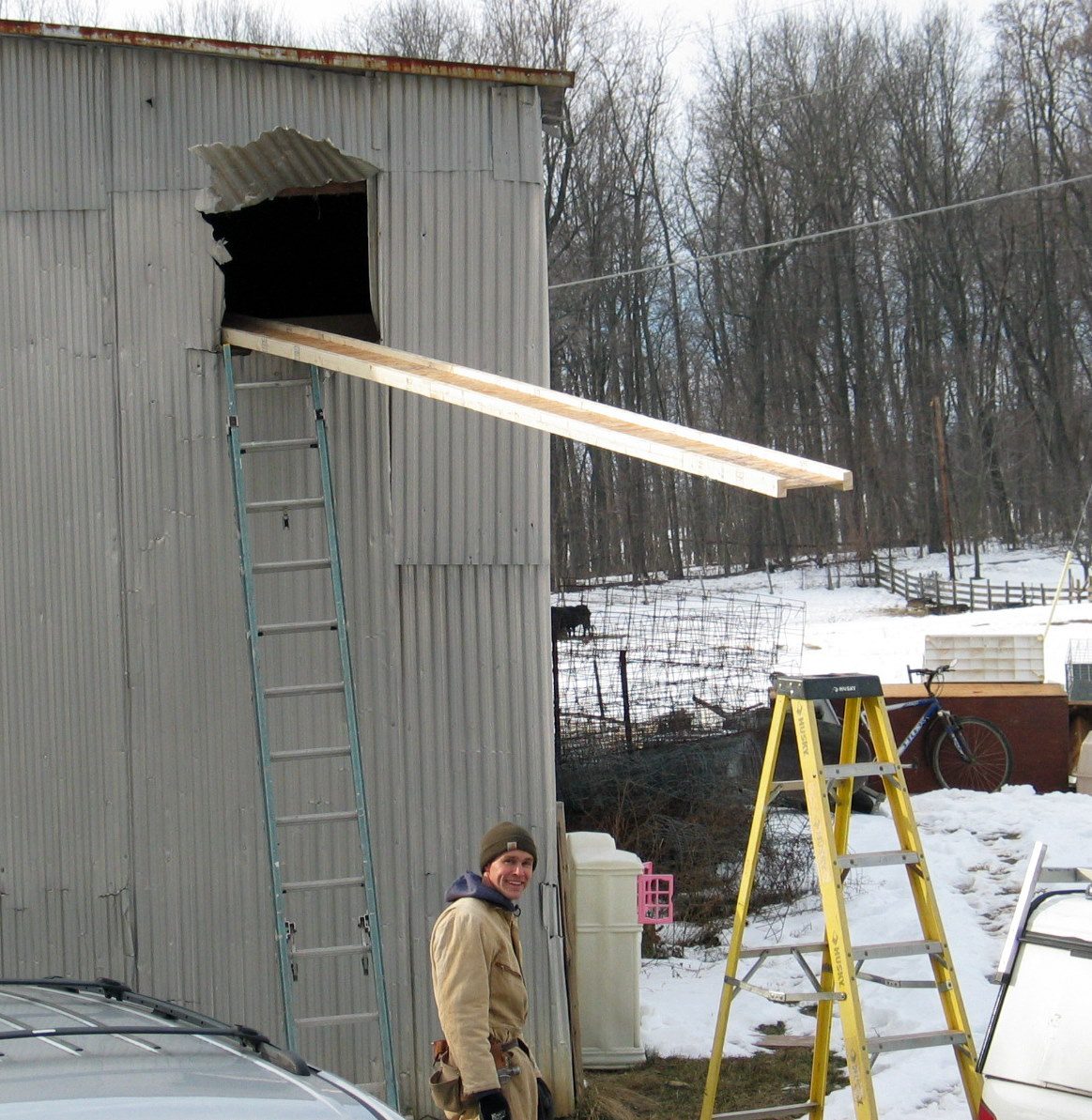 Just think how many MORE things we’ll be able to accomplish in a couple years when the kids are that much bigger, stronger, and smarter. But not smart enough to get out of doing any work, of course.

About One Year Ago: In which I almost burn the house down…twice. (Kind of.)