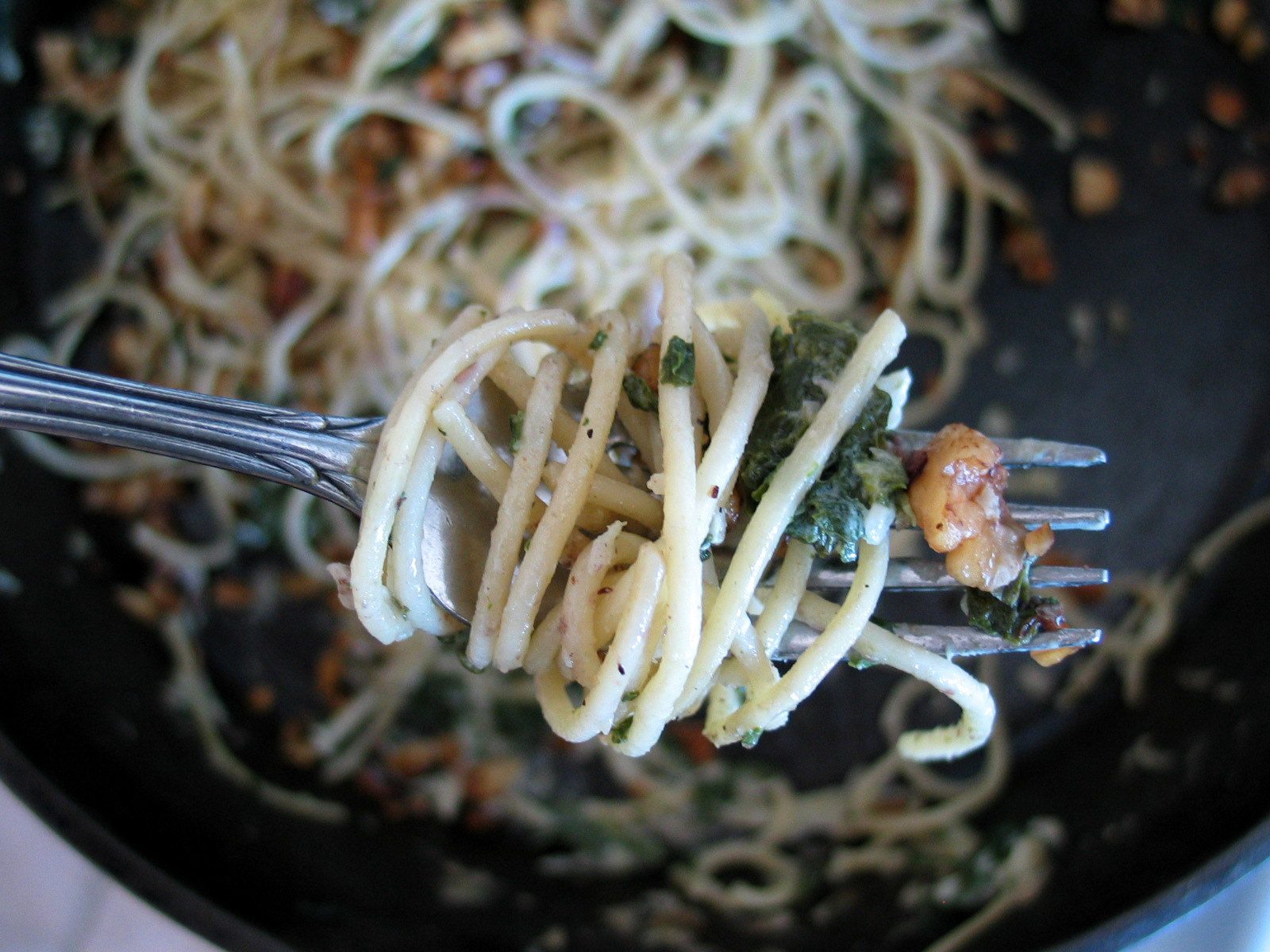 It’s no secret that I like to spiritualize my food. I did it with the Angel Bread, Salvation’s Chocolate Chip Cookies, Tomato Bread Pudding and probably a bunch of other recipes that I can’t even remember now. Food has a way of begging to be etherealized, or it would, if “etherealized” was a word.

Creamy Blue Cheese Pasta with Spinach and Walnuts is one recipe that is sure to make the angels sing. Proof: I sang, and I’m fairly angelic, right?

It’s a basic recipe (well, expect for the cheese, which is a little high-end), and one that can be slapped together in no time flat, almost as fast as you can cook a kettle of pasta. It’s simple, folks, simple. And, in the same way that it’s the simple folk that hold the keys to the heavenly kingdom (now would be the place to quote scripture, but I’m not sure where those scriptures would be found, exactly—hmm, I must not be as angelic as I thought), it’s the simple foods that cause those heavenly angels to really belt it out. 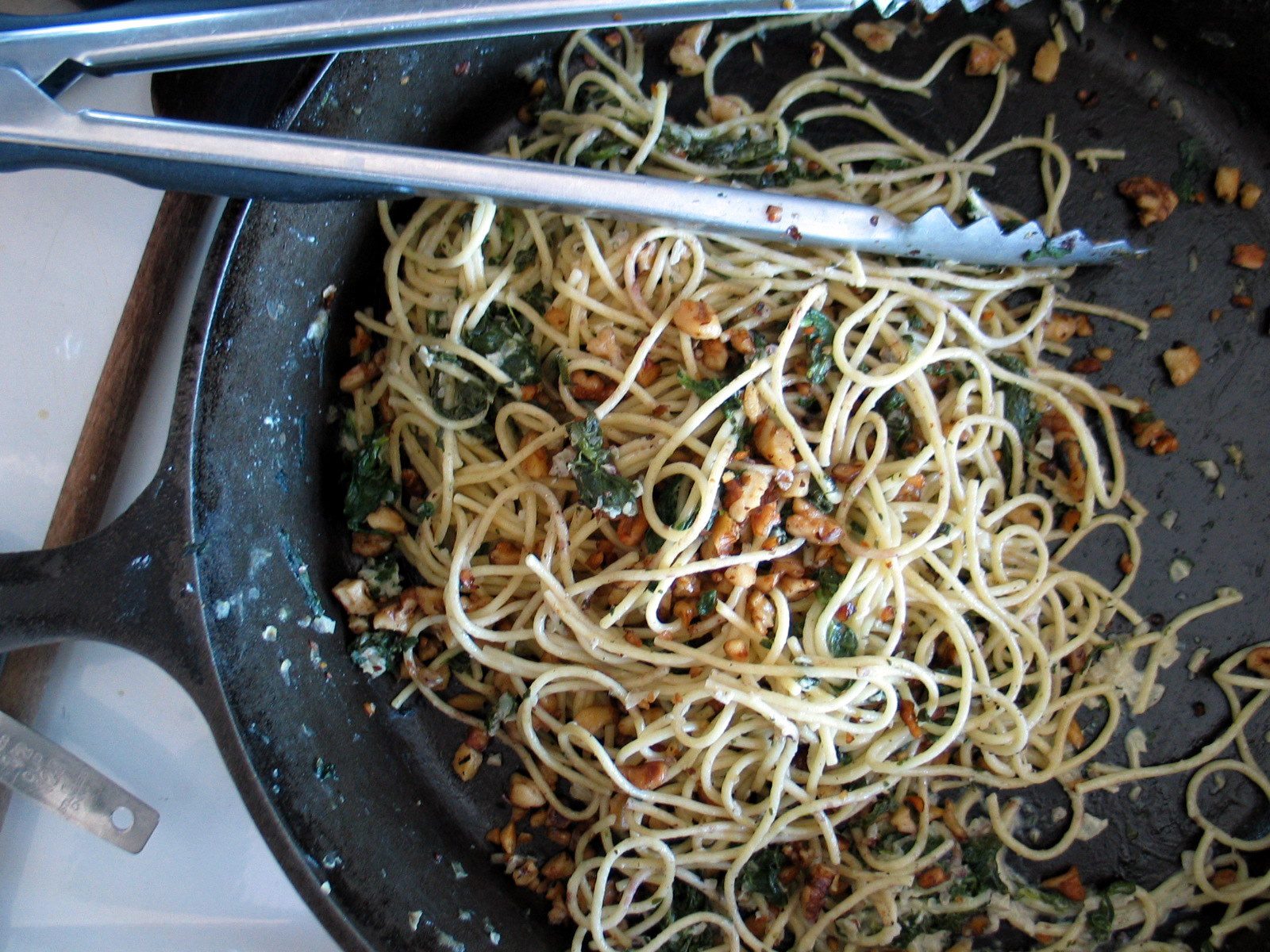 Mr. Handsome is not a blue cheese fan, not at all. In fact, when he saw what I was serving, he groaned, actually groaned. I gave him the Hairy Eyeball and a smidge of What For, and he shushed right up, dished himself a decent serving … and then had seconds. And the next day when we were scrounging through the fridge for a light supper, he choose the pasta over the chicken-cheese enchiladas and the Vietnamese Pork Meatball sandwiches (with spicy mayo and pickled carrots and fresh cilantro). “It’s good,” he said, and then ducked his head sheepishly. Silly old goat. (There’s a scripture about sheep and goats, but I’m not going to get into that now.) 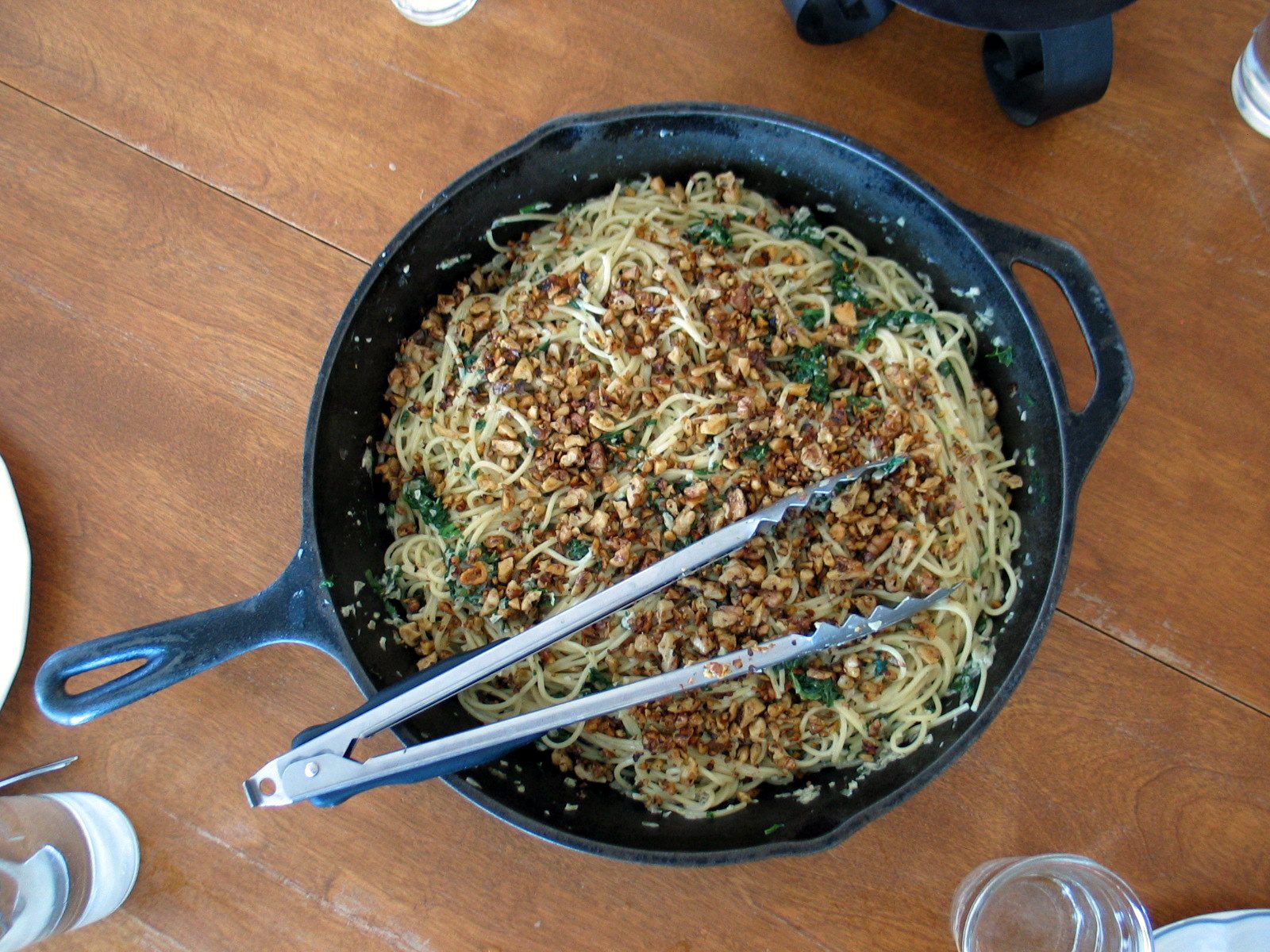 When I looked this recipe over again before writing it down here, I discovered that I had made it all wrong. I used a whole pound of pasta, but the recipe only called for one-half pound!

The end result was still delicious (obviously), just a lot lighter (and cheaper). I’m writing down the recipe as it is in the magazine, but if you want, you can double the pasta and still have a tasty meal. You’ll probably just want to add a bit extra of the pasta water to make it saucier (and more stretchable).

Keep in mind that I used only 5 ounces of blue cheese for that one pound of pasta and it was quite tasty. I can’t help thinking that a whole 8 ounces of the cheese for half that amount of pasta might be overkill. But then again, it might be even more heaven-like. Oh, wait! There’s an equation there: I ate it + I died = I went to heaven. Yes, it’s illogical, but let’s not argue the finer points, okay?

Put the onion and garlic into a food processor and pulse till it’s finely chopped.

Cook the pasta according to package directions. Reserve a cup of the cooking liquid, though you’ll only use about 1/4 cup of it—I like to play it safe. Drain the pasta.

While the pasta is cooking, heat one tablespoon olive oil in a large skillet and add the chopped walnuts. Cook over medium-high heat, stirring constantly, for 2-3 minutes, until golden brown. Transfer the nuts to a bowl, set the skillet back on the burner, and add the other 2 tablespoons olive oil, the chopped onion and garlic, and the salt and pepper. Cook for 2-5 minutes until the onions have softened, but not browned.

Add the spinach, blue cheese, and 1/4 cup of pasta water (more if you want a thinner sauce), and simmer until the greens have wilted and softened and the blue cheese has melted. Add the red wine vinegar and stir well. Add the cooked pasta and toss to coat. Sprinkle with the toasted walnuts and serve immediately.

About one year ago: Baked Hash Brown Potatoes