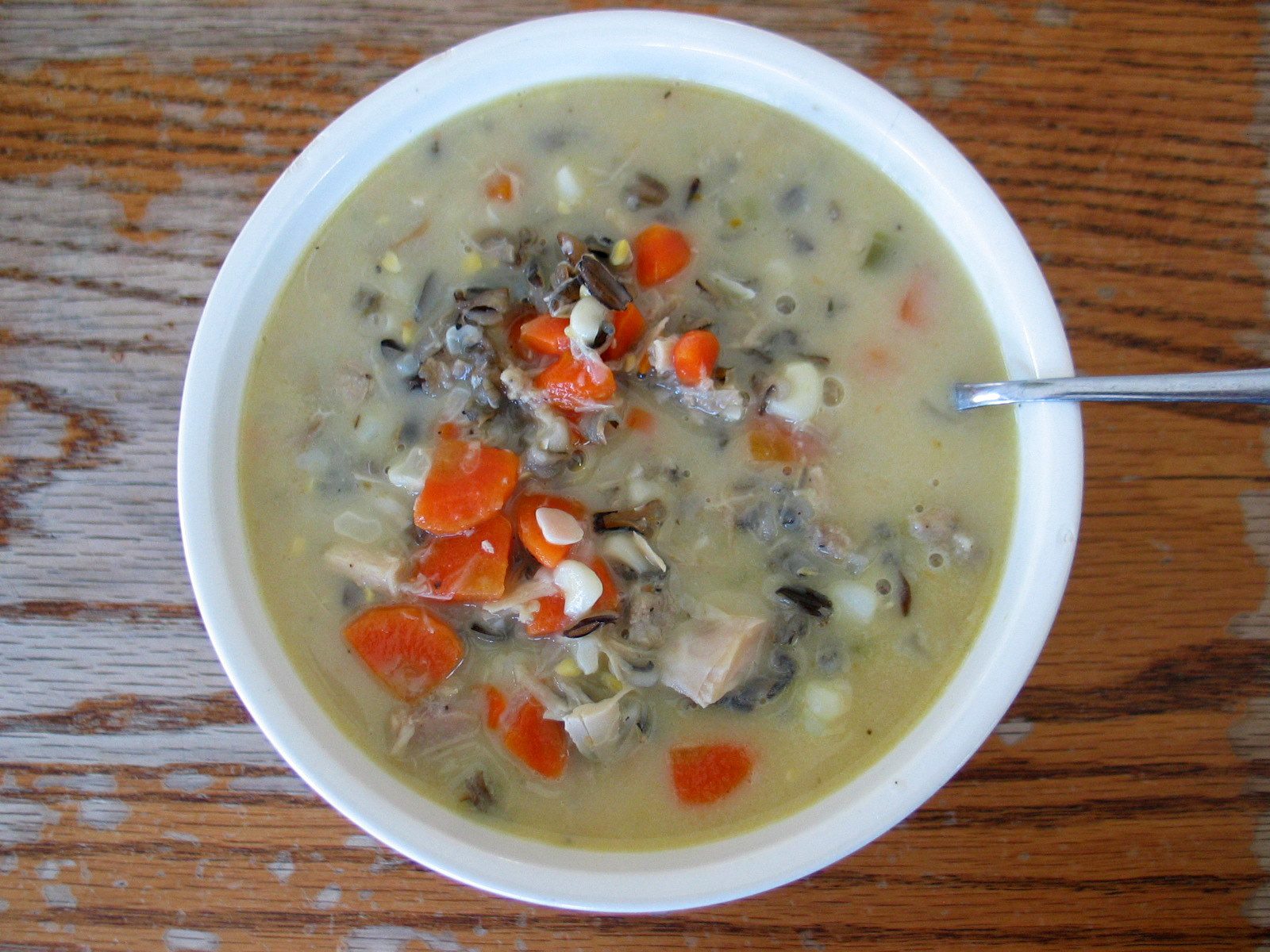 I really need to tell you about this turkey-noodle soup I made a couple weeks ago. I hope this recipe doesn’t follow too closely on the heels of the butchering post, because it would be really sad if, in my impatience, I turned you off this soup before you even made it.

Actually, that’s a lie. I’m not posting this recipe for you, so much as I am for myself; I am a selfish person and this is my blog and it’s all about me, mememememeME. I really have no altruistic motives by posting recipes. It’s just because I want them in my recipe index.

Well, I do like sharing recipes, too. It makes me feel good when I can spread good recipes as freely as good cheer. Not that I spread much good cheer, and not that sharing to make myself feel good is altruistic. So let’s just forget I said anything, okay?

Aaaand, on with the soup we go. I’ve made it two different ways so far—once with noodles, and again with wild rice. Both times I was following different recipes but they were so similar they could’ve been kissing cousins. (And just so there’s no confusion, these pictures are of the wild-rice soup version, but it looks very similar to the other one, minus the black specks, of course, and plus some squiggly-squishy, oh-so-slurpy, yummy pasta. Oh, and minus the peas and plus the corn. This is getting to be a bit much for even me to keep straight. I’m sorry.)

I got the inspiration for the turkey-noodle soup after finding the recipe in an old, old cookbook that my mother in-law gifted to me. I’m wary of older cookbooks—often the recipes don’t have quite the punch that we are accustomed to nowadays—and this book was filled with meaty, simple-looking (and simple- tasting, I suspicioned) recipes. But the soup recipe I was eyeballing called for sherry. Sherry’s good, especially in a soup, and I’ve had a large bottle of it sitting in my fridge for the last half decade, ever since I bought it to put in a creamy lentil soup (which I should make again, come to think of it).

I made the soup, tasted it, and pronounced it good. Then I added the sherry, tasted again, and said wowsers, hip-diggity dog WOW. Sherry does that, apparently—transforms simple food into something quite exotic. I was a little worried the kids wouldn’t like it—sherry is an odd flavor, after all—but they loved it.

Then I made the turkey-wild rice soup. (I had a lot of turkey left over after our turkey-in-a-wash basket adventure.) It also called for sherry, and other fancy things like fresh parsley (yes, that’s considered fancy when it’s 15 degrees outside and my garden is deader than a doornail) and cream (not fancy exactly, just lush). The kids weren’t so wild about that one; they had issues with the wild rice’s nutty texture, I think. 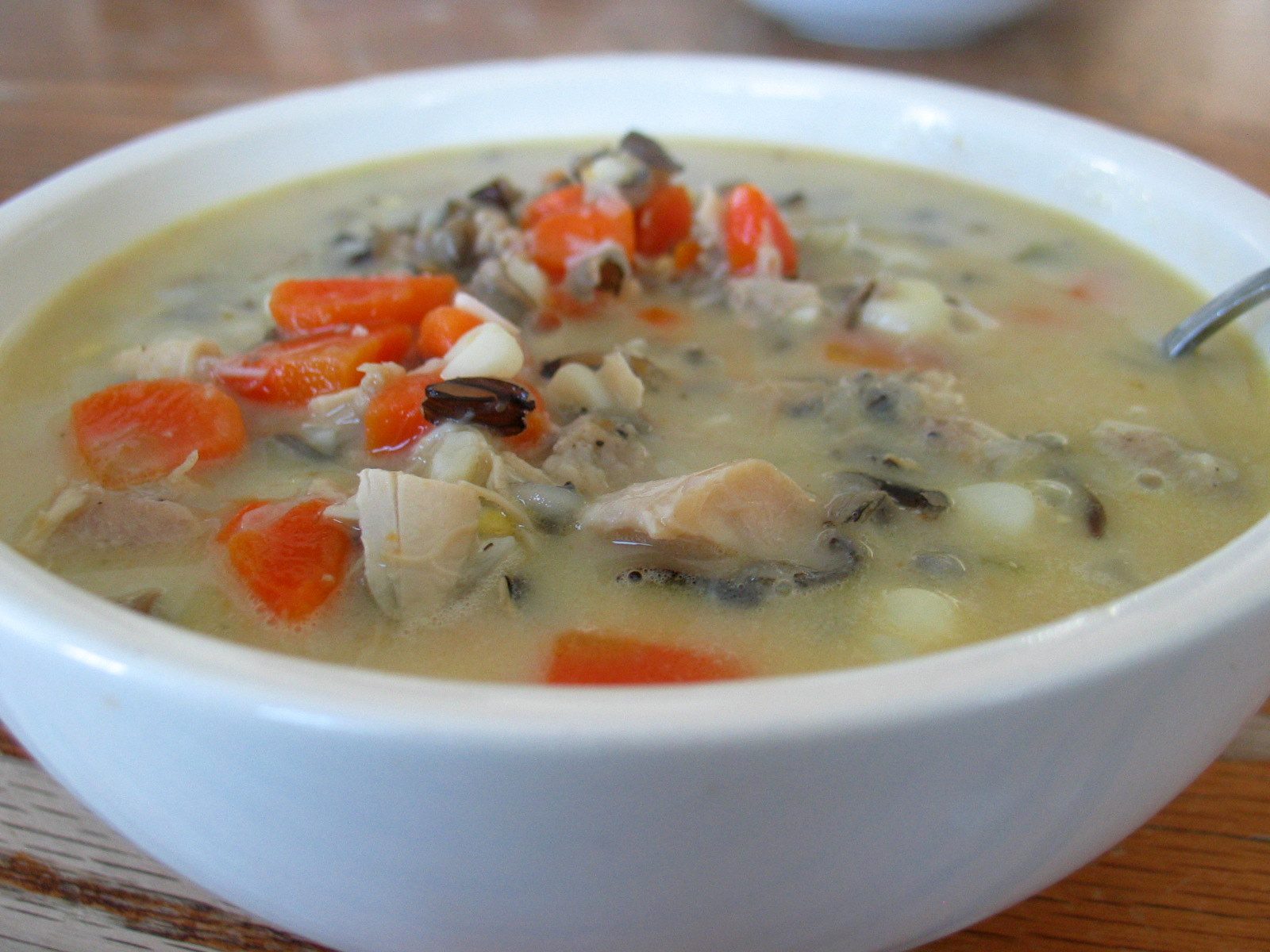 So anyway, the following recipe is a combination of the two. You could substitute other grains (barley, brown rice, maybe even hominy), and play around with the veggies a bit, but you must not, under any circumstances, mess with the sherry. Well, you could, I suppose, but it wouldn’t have that particular flavor that makes this soup stand a head taller than all the other turkey soups.

Turkey-Noodle Soup
Inspired by The Settlement Cookbook and Epicurious

In a medium-sized pan, simmer the celery, onion, and carrots in one cup of the broth till tender. Set aside.

Melt the butter in a large saucepan over medium-high heat. Stir in the flour. Whisk in the remaining broth and stir till thickened. Add the cooked vegetables (with the liquid), chopped turkey, peas, cooked noodles, seasonings, and heat through. Remove from heat and add the sherry, cream, and grated cheese. Thin the soup with some milk, if desired, and taste to correct the seasonings. Serve hot, garnished with fresh parsley.

Variations:
*swap the turkey for chicken
*substitute precooked wild rice (or brown or white rice) for the noodles
*use other (precooked) grains in place of the noodles
*add some browned sausage and ½ teaspoon dried rosemary
*add some browned mushrooms
*add a cup of corn
*reduce or eliminate the cream by substituting milk for some of the broth that is used to make the roux
*add a pinch of freshly grated nutmeg

About One Year Ago: On staying home alone and surviving my wicked imagination.