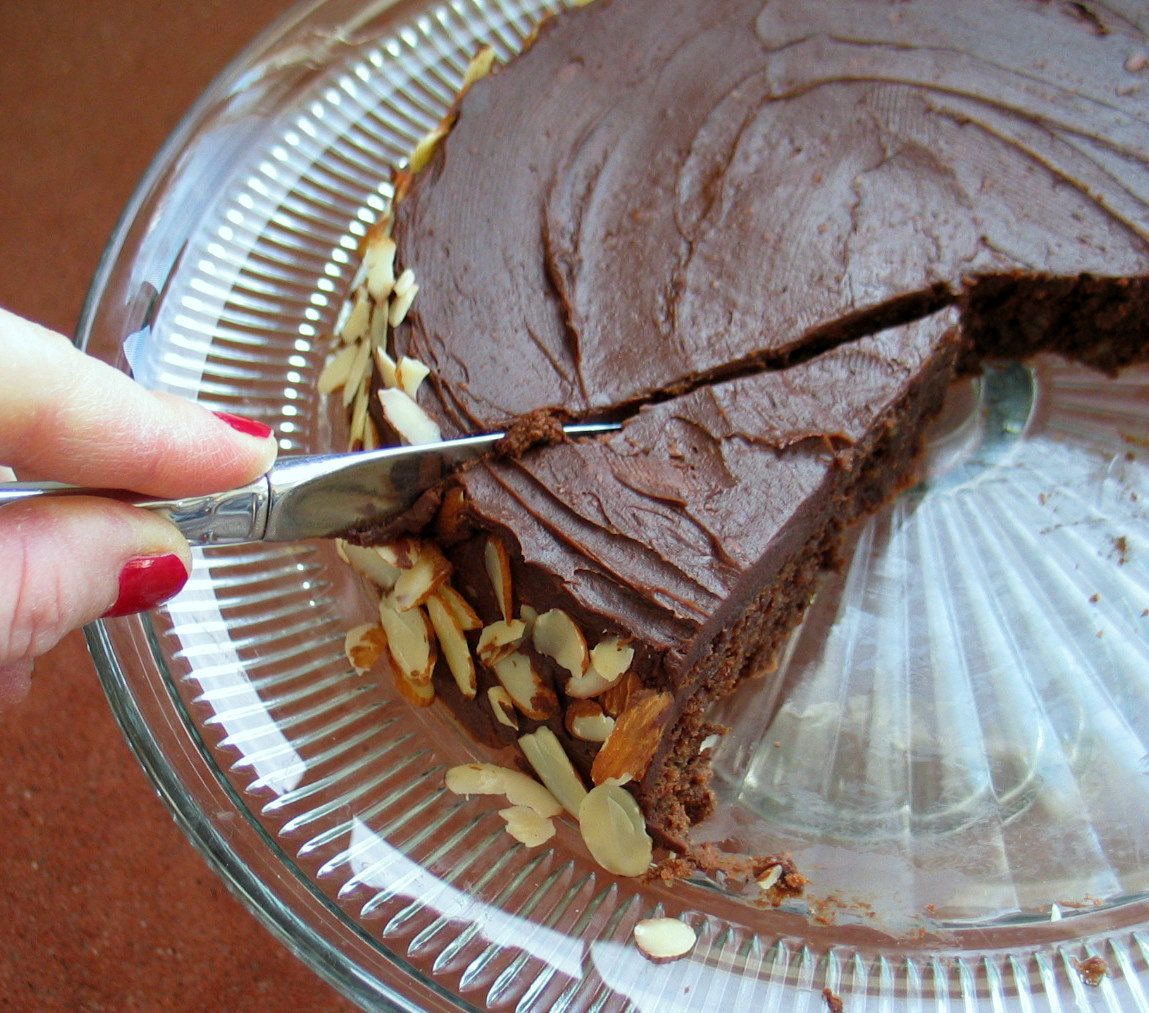 One of the lasting impressions from the Julie and Julia movie, aside from when Julia forces Paul to sample the fish she is swooning over and then tries to drag a compliment out of him but only gets a noncommital shrug in response (that’s me and Mr. Handsome to a tee—well, minus the balding head and big heels), was when Julie made that chocolate almond cake and then Eric tore into it with his fingers while she was still icing it. And she laughed.

You wouldn’t catch me laughing if someone grabbed a hunk out of a cake I was working on. Just last night Miss Beccaboo snaked her hands under my arm to snitch from the pans of granola I was stirring, and she was duly rewarded with an elbow in the head. It was completely accidental (I think), but I was kind of glad it happened. Her fingers are always everywhere, poking and snitching and grabbing. She’s been this way ever since she was a baby, touching everything, so the natural consequence of a bonked head was rather gratifying (poor kid). 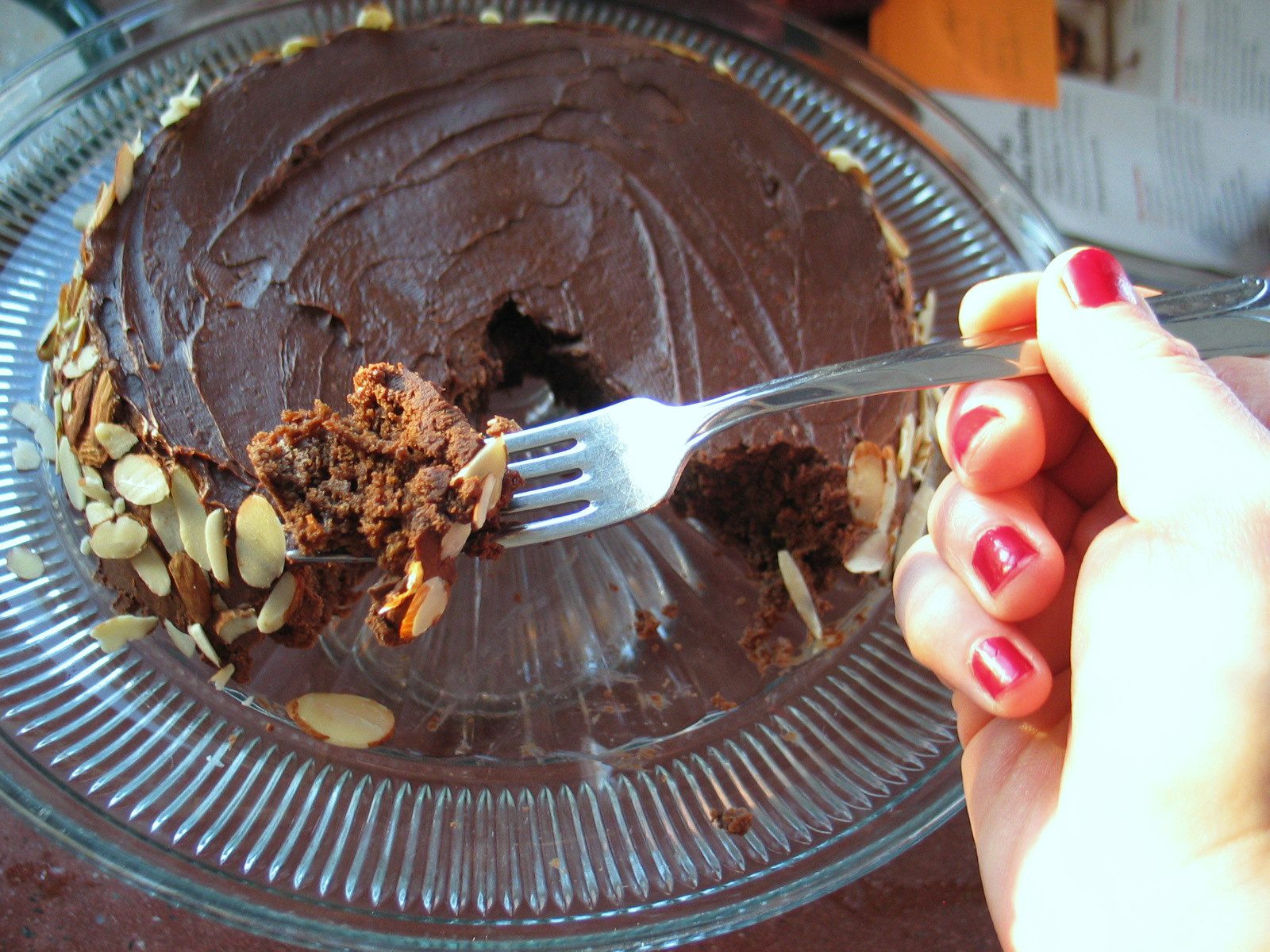 I did, though, dive into the cake fork-first myself, though the cake was fully iced when I took the plunge. (I think that pretty much explains from which parent my daughter has inherited her snitchy fingers.) 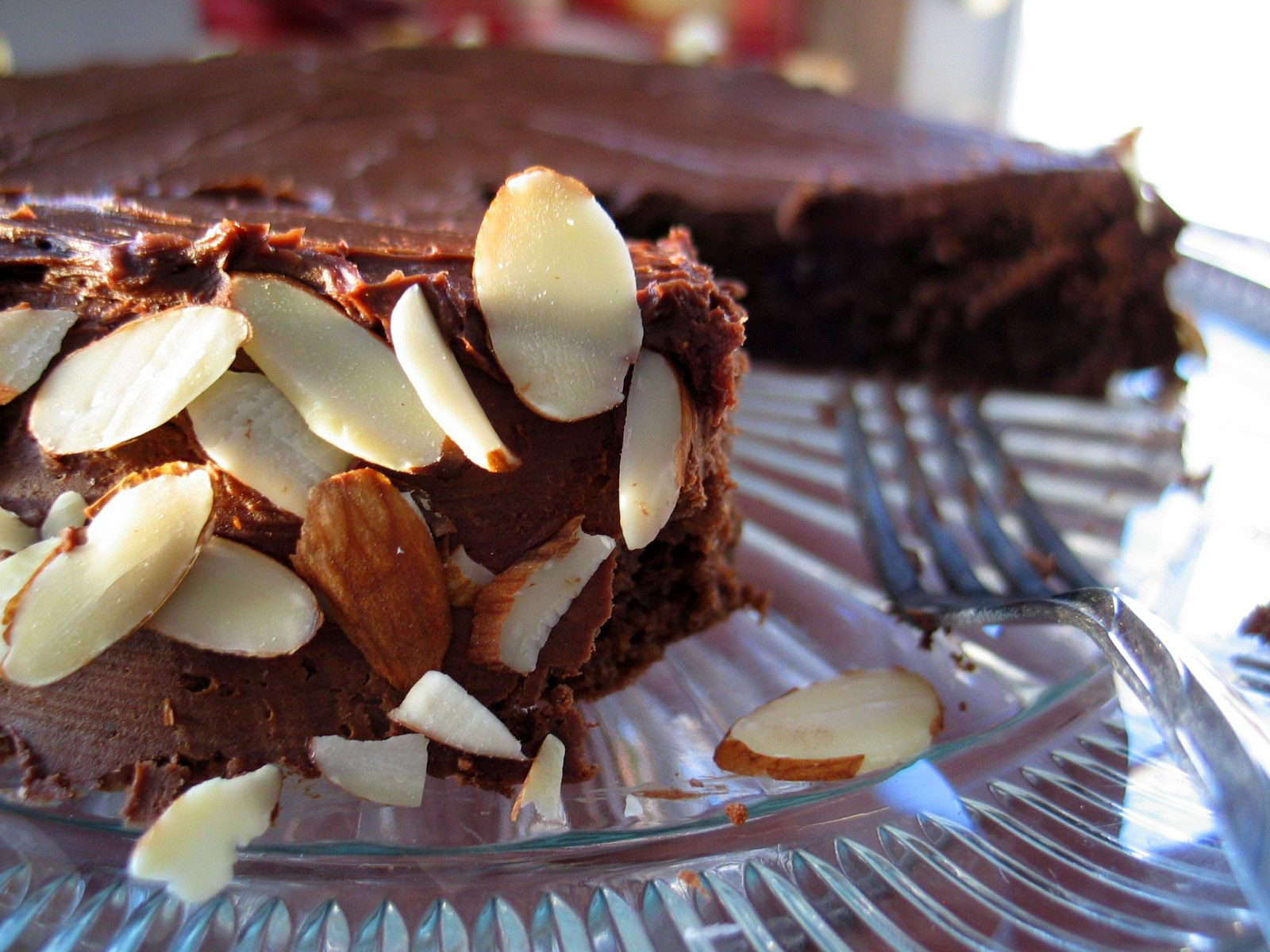 Now that I finally got around to making the cake, I can’t believe that I’ve had Mastering the Art of French Cooking on my shelf all this time and have never made it before. Of course, there are probably a lot of other equally divine recipes in that book that I don’t know about, and somehow I get by without any notable pangs of regret. (My logic is skewed, I know. It’s like lamenting that my kids don’t know the whole periodic table right now. But, might I point out, you can’t eat the periodic table.) However, discovering a spectacular chocolate cake has a way of erasing any logic one might (or might not) normally possess.

The recipe makes just one eight-inch layer cake. I don’t know about you, but two-layer cakes can feel daunting some days—by the time you get down to the last couple pieces you’re pretty much sick of cake. This cake, on the other hand, is so elegant and rich that it still lasts a long time despite its petite size.

Of course, it would disappear faster if I stooped to share it with my family, but seeing as I’m pretty much the only one eating off of it (because I’m being greedy and make a point of sneaking pieces during the kids’ rest time), it has stretched out to cover a week’s worth of afternoon coffee breaks. And it doesn’t tempt me (too much) in between eatings because it’s so rich (though I look forward to my allotted slice all day long).

Now, the icing is a different entity all together. It’s the very last recipe in the book, so that in itself says something (you know, best for last and all that jazz). All you do is this: melt some semi-sweet chocolate with rum and then whisk in five tablespoons of butter, one tablespoon at a time. The resulting mixture is runny, runny, runny, but! Just set it over a pan of ice (or in my case, run outside and set it in the snow) and beat it steadily and before you know it, it firms up into a creamy, whipped chocolate butter. It’s magic. 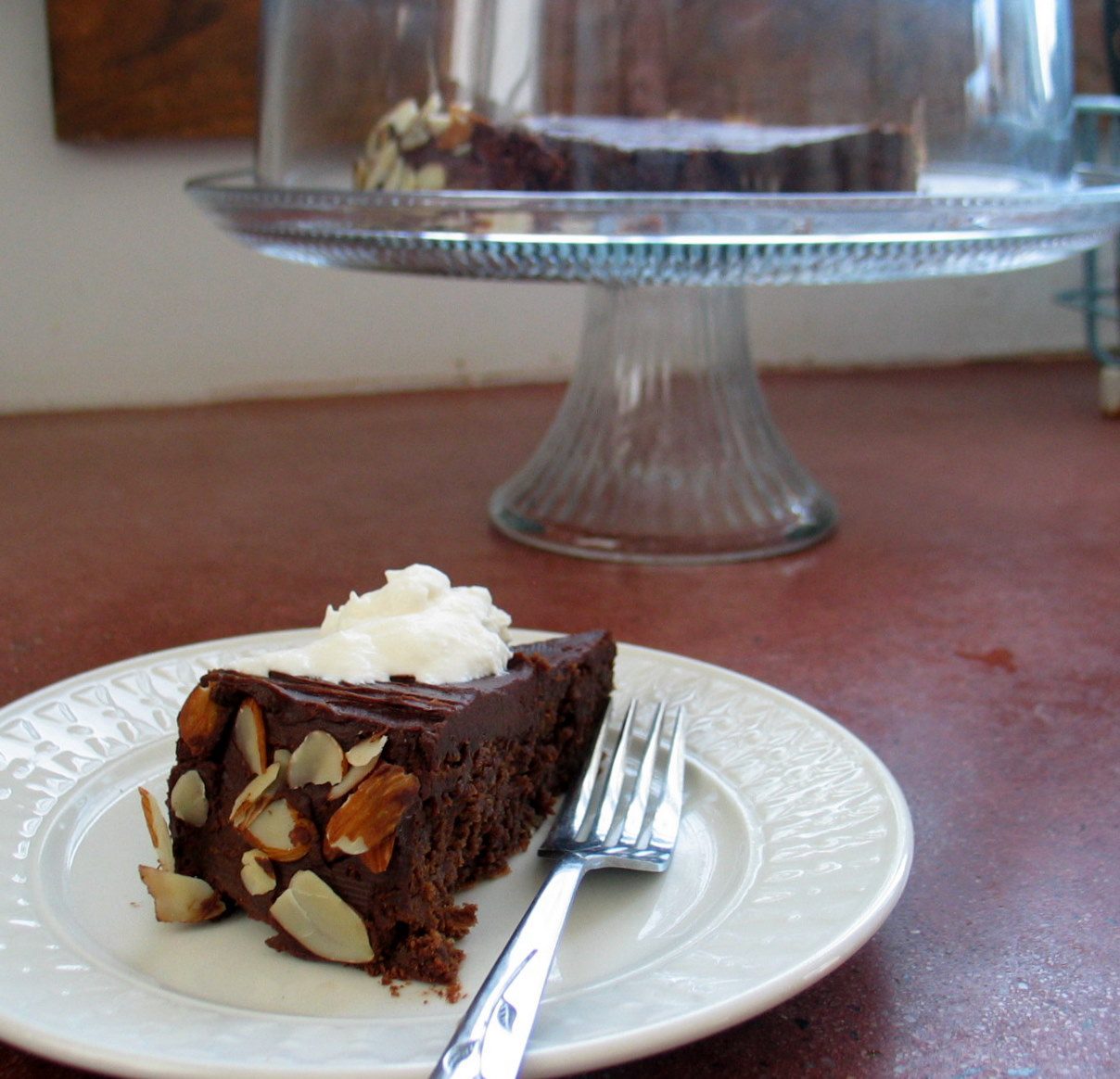 While the icing is deliciously tender and creamy, I prefer the cake without it (so much so that I scrape off the icing before I eat the cake); instead, I find a big dollop of whipped cream to be the perfect pairing. However, if you do want to make the icing (and I firmly believe that everyone should try this icing just once, if only to make yourself feel like a wizard), you must use unsalted butter. I didn’t, and the icing was disturbingly salty. 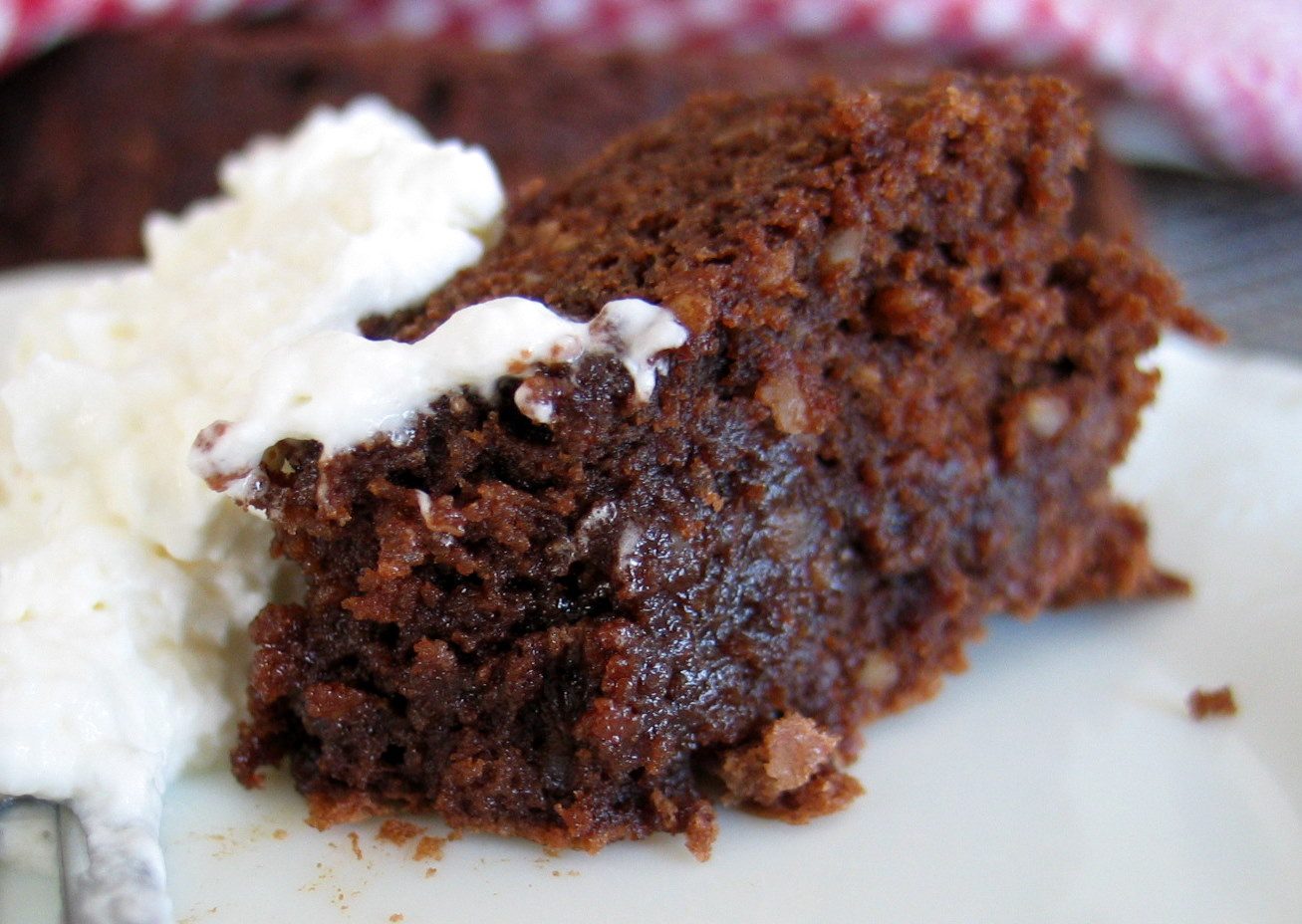 Confession: after boasting that I’m able to restrain myself all day without eating any cake, I went and ate the last piece after I wrote the above paragraphs. And it’s not even ten-thirty in the morning! The Baby Nickel discovered my soiled plate, ran over to the counter to look at the cake platter and came back crying. Now I have a problem (besides the broken-hearted baby): what to eat with my afternoon coffee?

This cake is supposed to be underbaked. Julia said to bake it for twenty-five minutes, but after twenty minutes the top looked dry and cracked, so I took it out of the oven. It sank a lot, and was wonderfully gooey while warm, like a molten chocolate cake (whipped cream was created for cakes like this), but once it cooled to room temperature, it set up nicely and was simply, and perfectly, moist.

The almond does not overpower—it’s a modest enhancement that really, really works.

Using a double boiler, melt the chocolate with the rum over a pan of simmering water, stirring occasionally. Once the chocolate has melted, remove it from above the water and set aside.

Beat the egg whites with a pinch of salt till soft peaks have formed. Sprinkle one tablespoon of sugar over top and beat until stiff peaks form.

Not bothering to wash the beaters, cream the butter with the remaining sugar. Add the egg yolks and beat some more. Add the melted chocolate to the butter and stir well. Add the ground almonds and almond extract and stir to combine. Blend in one fourth of the egg whites to lighten the batter and then, with a folding motion and a rubber spatula, add the cake flour, sprinkling a bit of it on at a time, alternately with the rest of the whites.

Pour the batter into a prepared eight-inch cake pan (greased and lined with wax paper) and bake at 350 degrees for 20-25 minutes. Cut around the edges of the cake with a knife and then let it rest for ten minutes before gently turning it out onto a wire rack to cool the rest of the way.

Using a double boiler, melt the chocolate and rum over simmering water. When the chocolate is creamy smooth, remove it from over the hot water and stir in the butter, one tablespoon at a time. Set the pan of liquid chocolate over a pan of ice (or take it outside and set it on a pile of snow) and whisk steadily till it has whipped up into a creamy frosting. Immediately spread it over the sides and top of the cake. Decorate with slivered almonds, if desired.

About one year ago: Five-Minute Bread: Part II (the actual recipe). Miss Beccaboo mixed this up this morning; we’re having pizza for supper.