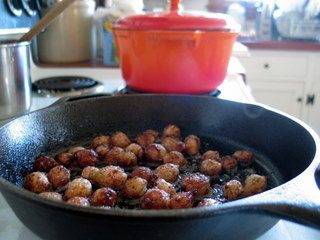 On Monday morning I walked into a local rinky-dink meat shop and fell in love. Actually, that’s not quite right—I didn’t walk into the shop and immediately fall in love. The moment of enamorment was actually two separate moments.

The first moment was when the swinging door behind the deli counter got stuck open and I had a clear view of the butchering floor. A man was standing just inside the large room, his arm thrust deep into a skinned, four-legged beast which was dangling stiffly from hangers. As I watched, the man pulled his hand out, along with a handful of somethingorother, and then unhooked the animal, cradled it in his arms like a baby, and thunked it (it’s really a good thing it wasn’t a baby) down on the counter. I blinked, or glanced away or something, and by the time my eyes had refocused, the man was holding a large bandsaw in one hand and a tremendous “drumstick” in the other. The door swung shut then, putting an end to my little peep show.

The second moment happened when I told the woman behind the counter that I needed stew meat but that I wanted it to be cut bigger than the little pieces in the showcase. “Could I have some of the lean stew meat in two-inch cubes, please?” I tentatively asked, not sure of proper butcher-shop etiquette. “I need three pounds.”

“Three pounds, you say?” she hollered at me cheerfully. I nodded and she turned, pushed open the swinging door and shouted my order at the saw-wielding dudes in the back. “It will be a couple minutes,” she said when she returned. “Would you like anything else?”

While I waited for my cut-to-order (!) beef, I listened to the boisterous meat-doler-outer and another customer (he was wearing a white coat and buying for his business) discuss the merits of tripe, the newly offered pigs’ stomach, and the benefits of using cow feet to make broth (and while I was there I saw another customer make off with a large bag of animal feet). When the conversation shifted to beef shanks (of which I bought two), I joined in, telling them about the glories of peposo.

As I pulled away from the little nondescript shop on the edge of town, my bag of freshly cut stew meat, beef shanks, and side pork (which I thought was bacon but soon learned otherwise) settled on the floor of the passenger side, I nearly shouted with glee over my newly discovered treasure. I had just unearthed a shop that slaughters local meats (for the most part), that gives customers their choice of grass-fed or grain-fed beef, and that will cut the meat according to specifications! (I think all of that is true; I’m still figuring the whole system out.) Briefly I imagined that I was no longer living in the Shenandoah valley, but in a European town, one that was crammed (I give my imagination free rein when I’m in the car) with high-quality specialty shops. And so, in the spirit of celebration (and the reason that I had sought out the store in the first place), I went home and made Beef Bourguignon.

This stew was a long time in coming. There were many little components that led up to its conception (both the idea and the reality) and if I told you all of them, it would exhaust you and I would run the risk of sounding whiny and pathetic. I’ll just tell you this:

*I have been wanting a lidded cooking pot that is for both the stove top and the oven, and last week I found one at a discount store: an enamel-coated, cast iron, five-quart pot, and the best part was that it was painted orange, just like in the Julie-and-Julia movie. Even as I was crouching down in the aisle examining every single label on the box, I knew that beef bourguignon would be the pot’s christening meal. I’m not usually sappy like that, but considering the circumstances (recently viewed movie, bedtime perusing of Julia’s cookbook) there was no other option. It was the right thing to do. 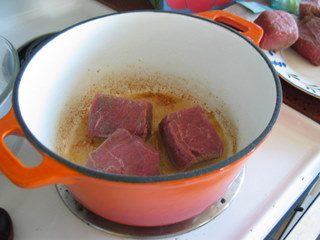 *The ingredient list, while not really all that tricky, had me in a consternated fix on several different occasions. The “bacon” from the butcher wasn’t really bacon, and then I forgot to buy real bacon when I was at the grocery store so my sister-in-law kindly brought me some when she made a trip to town. There was no beef broth in the freezer like I thought there was, so Mr. Handsome had to stop on his way home from work to buy me some Swanson’s. I couldn’t find fresh pearl onions, so I bought frozen ones (and they were quite good). I used my last bottle of red wine, but at least I had a bottle of red wine to use. I greased up the kitchen two times—once when browning the beef and again when browning the mushrooms. 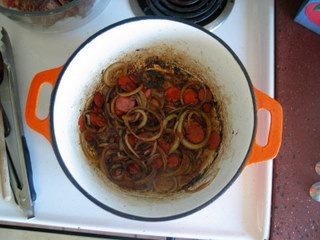 *The process was different from what I’m used to, but that’s not saying much since I don’t really know much about cooking beef. Because this was a learning experience and I was determined to improve my technique, I followed the recipe to the letter. I braised the onions, browned the mushrooms (in four batches), towel-dried my beef cubes (and then bleached the towel), browned all sides of the beef in the bacon fat, drained the fat, browned the veggies (used exactly one onion and one carrot, no substitutions or embellishments), cooked the mixture for three hours (adding the broth towards the end when Mr. Handsome walked in the door), poured everything into a strainer, reduced and flavored the broth, washed out the pot, reassembled everything in the clean pot, and sprinkled the stew with freshly-picked-in-the-dark parsley. I even served the meal with peas and buttered boiled potatoes and red wine, just like Julia recommended. And it was good, kiss-your-fingertips good, richly sauced and fork-tender. 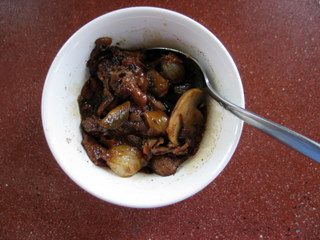 Of course by then it was too late for me to take any pictures, so you’ll have to settle with a photo of today’s lunchtime bowl of beef. 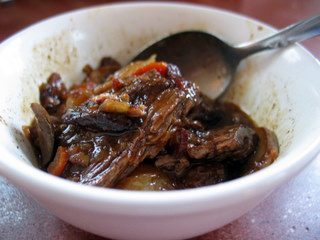 In your gorgeous five-quart, enamel-coated, cast iron cooking pot, lightly brown the chopped bacon in a tablespoon of olive oil. Scoop the bacon out of the pot and set it aside.

Working in batches, brown all sides of the (towel-dried—any moisture and the meat won’t brown as nicely) beef. Set it aside with the bacon.

Add the sliced onion and carrot to the fat and stir them around for a couple minutes until they are nice and brown. Carefully tilt the cooking pot and pour off the fat into a bowl. Dump the meat and bacon back into the pot on top of the veggies. Sprinkle the beef with the salt, black pepper, and flour and toss well. Put the uncovered pot into a 400 degree oven for 4 minutes. Remove the pot from the oven, stir the contents a bit, and put it back in the oven for another 4 minutes. Remove the pot from the oven and turn the oven down to 325 degrees.

Pour the wine and beef broth over the meat. Add the tomato sauce, bay leaf, garlic, and thyme and stir briefly. Bring the stew to a simmer, clap the lid on the pot and slip the whole kit and caboodle into the oven. Leave it alone for three hours. In the meantime (or two days before, or whenever), prepare your baby onions and mushrooms.

When the three hours is up, dump the pot’s entire contents into a strainer set over another large kettle. Wash out your fancy-schmancy, heavy-duty cast iron pot. Put whatever is in the strainer back in the now-clean pot. Add the mushrooms and baby onions.

Put the pan of broth on the stove top and bring the sauce to a simmer. Cook it until it has been reduced to about three cups of liquid (or more, if you like—the sauce is amazing and I couldn’t get enough of it, so err on the side of too much), correct the seasonings, and then pour it over the meat.

Bring the meat to a simmer, stir briefly, sprinkle it with parsley, and serve.

Makes enough for 6-12 people, depending on how hungry they are and whether or not they love their beef.

Melt the butter and oil in a saucepan. When the butter fizzles, add the baby onions. Cook the onions for about ten minutes, gently shaking the pan every so often and nudging them gently with a wooden spoon so that they turn over and brown evenly, more or less. Sprinkle with salt and pepper, and add the liquid.

Transfer the (uncovered) pan to a 350 degree oven for 30-45 minutes, or until the liquid has completely cooked off. Gently turn the onions every ten or fifteen minutes so that they brown evenly.

Serve immediately, or else store in a covered container in the refrigerator until they are called into service.

Browned Mushrooms
From Julia’s Mastering the Art of French Cooking

Melt half the butter and olive oil in a large skillet. When it fizzles, add half of the sliced mushrooms, making sure that none of the mushrooms are overlapping (you want them to brown, not steam). When they are brown on one side, turn them and brown on the other side. Sprinkle with salt, scoop them out of the pan, and repeat with the second batch. Use immediately, or store in a covered container in the fridge until later.

About One Year Ago: Chocolate Truffle Cake