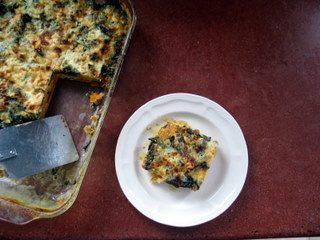 I experiment with all sorts of new recipes.

But then, if you’ve been reading this blog for any length of time, you already knew that.

Take last night for instance. I made four new dishes for supper: baked carrots (gross), pickled red cabbage and apples (potential), bacon-cream cheese mashed potatoes (alright), and upside-down apple tart with whipped cream (fine). None of them were rave-worthy, so none of them will appear on this blog.

However, I do this really silly thing. I stash all the recipes I’m interested in and all the recipes I’ve made, even the bad ones, into a white, three-ring binder. I do this for the same reason that I don’t erase old addresses in my address book (I just cross them out and jot in the new ones)—I like to see my friends’ address trails. Likewise, I like to see my food history, what flavor combinations have been a hit and which ones have flopped.

It’s kind of a protective device too, because I have such a terrible memory. Say we’re talking about pumpkin bread and I’ve experimented with four different recipes and found my favorite, but the next year I find another pumpkin bread recipe and I think—hey, that looks good; I oughta try it—but, because I have saved all my failed recipes, I can glance back in my folder and see that I already tried that one and I hated it. So in a round about way (and in a perfect world because, truth be told, I don’t always scan through my white folder first), I’ve prevented myself from creating another flop. 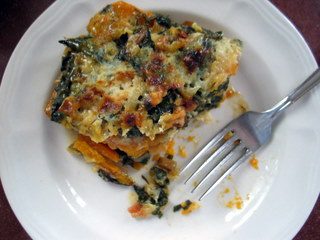 This habit of mine can get a little cumbersome though, because despite taking notes and occasionally weeding through the piles, I still don’t know which recipe, of all the recipes I’ve tried, is my favorite. Huh?, you ask. I know, I know. This is getting very confusing. But let’s take the pumpkin bread example again. I may write “blech” on one recipe, but on the other three I may note “okay” or “the kids loved it” or “try adding less oil and an extra egg and omitting the nuts,” but, and here’s the clincher, I won’t remember how they compared against each other. And then, come pumpkin season, I’m back at square one, with a handful of recipes that need to be tested, again.

That’s where this blog has come in handy. It’s a record of My Very Favorites. When I find something I love, it must end up here if I am to remember it. And now that the blog index has bulked up a bit, I refer to my computer almost as much as I do my recipe box. (You do remember, don’t you, those quaint little boxes filled with handwritten recipes, ordered by category or alphabetically? Every kitchen, even one with high-speed internet, ought to have one.)

This chard-sweet potato gratin recipe is cropping up all over the web (well, so far on two blogs that I know of), so even though it feels kind of pointless for me to write about it here, I know I must post it if I am to remember it and then be able to refer back to it. And this is one of those recipes that I most certainly do not want to forget. 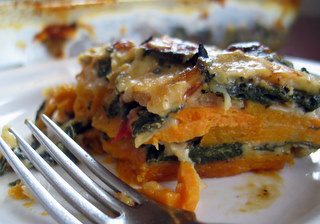 Swiss Chard and Sweet Potato Gratin
Adapted from Deb at Smitten Kitchen. (Also made by Julie at Dinner With Julie, if you want even more opinions and pictures.)

There appear to be lots of steps in this recipe, and it’s true, there are, but the flip-side is that you are making a satisfying one-course meal; there is no need to dirty any other kettles for a side vegetable, and you can quickly wash up the soiled pots and pans while the gratin bakes and fills your kitchen with an out-of-this-world, oh-so-glorious, downright delicious smell. (I am not exaggerating about the smell.)

Melt 2 tablespoons of the butter in a large pot. Add the onion and saute till tender. Add the chard stems, the pinch of nutmeg, salt, and pepper and cook for another eight minutes, or until tender. Add the chard leaves and stir till wilted and soft. Transfer the vegetables to a colander and drain, pressing on them with the back of a spoon. Set aside.

For the white sauce:
In a smaller kettle over medium heat, melt the remaining 2 tablespoons of butter. Add the garlic and saute for a minute or two. Whisk in the flour and then slowly add the milk, stirring steadily. Increase the heat to medium-high and cook, stirring continually, till thickened. Remove from heat and set aside.

Bake the gratin at 400 degrees for about an hour. If the top seems to be browning too quickly, loosely cover the gratin with a piece of foil (do not cover it tightly because the liquid needs to evaporate). To test for doneness, poke a fork down through to see if the potatoes are tender. Cool for about ten minutes (to allow the juices to absorb and so you won’t scorch your taste buds) before serving.

About One Year Ago: Brownies