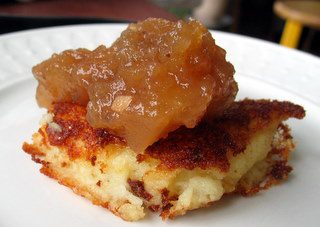 I’m at Panera, making myself write because I don’t want to write. Writing is such miserably hard work, especially when I don’t have anything pressing to say, but, nevertheless (insert martyr-like sigh), I’m forcing myself to Put Forth Words because this blog has become one of my disciplines; it’s one of the ways that I keep myself mentally healthy. It’s also one of the ways that I drive myself crazy. Go figure.

Yesterday when we got home from church I felt blah, grumpy, out-of-sorts, dissatisfied, and apathetic. So I took a nap (was rudely awakened when Sweetsie chucked a book at Miss Beccaboo and Miss Beccaboo screamed like a stuck pig), went for a walk in the warm sunshine (a much-needed jolt of vitamin D), and drank coffee. After the Make-Things-Right Trilogy, I was finally able to start functioning. I made a double batch of chocolate frosting, turned six pounds of ground hamburger into sloppy joe meat, washed dishes, made phone calls, baked a batch of Julia Child’s Swiss Cheese crackers (butter, of which there was a half a pound, poured off the cookie sheets and puddled on the oven floor, clouding up the kitchen with stinky smoke), and processed half of the broccoli that Mr. Handsome brought in from the garden. But I didn’t write.

Last weekend I saw Julie and Julia with some friends, and while I thoroughly enjoyed the movie, the parts that bothered me most were when Julie would sit down at her computer and type out a blog post. Just. Like. That. She had a full-time job, spent her (late) nights cooking and still managed to write witty, entertaining posts almost daily.

Yes, I know I’m not supposed to compare myself, but those little pictures of someone effortlessly writing are enough to almost make me slap my laptop shut in despair. Writing for me can be torture. It can be fun, too, so I guess that makes my hobby fun torture, or torturous fun, whichever way you want to look at it. I’m a sucker for a good time, no?

I break my writing process into three parts. Part One is the urge to write. If I’m lucky, it’s also the thinking part where I have an idea worth pondering. This part, if I have a good idea, is great fun because while I’m in this stage I easily create fabulous literary works of art…without ever cracking my laptop. More often than not though, I have the need to write something without any clear direction about what to write. I get a niggling IgottawriteIgottawriteIgottawrite feeling, but I have nothing to say, and, as you can imagine, this is a rather uncomfortable feeling.

Part Two is a nasty slap in the face. I struggle (sometimes in vain) to get the words down on paper, a process which is almost never as smooth as I had hoped, nor the end result as witty. It’s the dirty stage, filled with editing, stops and starts, and the occasional Give Up, but it’s also a relief because I’m making myself do something.

And then, if and when all the words line up right (or semi-right), there is Part Three, the moment of “publication” and the sweet buzz that follows. That buzz lasts for just about twenty-seven minutes, and then it fades away into a pleasant nothingness where I loll about guilt-free, reveling in having completed my job and not needing to do any more work.

But at least I’m writing.

So phooey to Julie and Crew for giving the False Impression of Easy Writing. Even if writing sometimes comes effortlessly and quickly (glory be!), it doesn’t always come that way. It’s like anything in life—you get the good stuff via the smokey kitchen, dirty hands, failed attempts, and aching muscles. Usually it’s worth it, though sometimes it’s not.

So now I’m going to tell you about apple chutney. (Hee hee hee. You probably thought I was going to tell you about Julia’s cheese crackers, but, as you can see, I’m not. They weren’t good enough to validate a buttered oven floor, or for me to encourage you to smoke up your kitchen. [However, I don’t count the whole endeavor as a complete fail because I did learn some things, but I’m not going to go into them now—my point is simply that failures are not worthless, though most of the time I feel that they are.])

This apple chutney is worth a retelling here, not least of all because there was no smoke involved. The chutney is tangy-sweet, made with, among other things, garlic, cayenne pepper, honey, and cinnamon. It’s a delicious addition to pork, if you are a pork-eating sort of person, or with something as simple as fried potatoes and bacon (oops, the piggy wiggled in there, too). I made this to go with mashed potato pancakes, and the crispy, cheesy, bacon-y pillows of potato were enhanced tremendously by the vinegary fruit. I still have most of a pint of chutney in the fridge and a latke recipe that is screaming to be tested, so I know (and hope) we’ll have at least one yummy supper this week.

And now that I’ve completed a post, I can take a guilt-free break from this torturous addiction of mine. Whew, hallelujah, glory be, and … until next time. 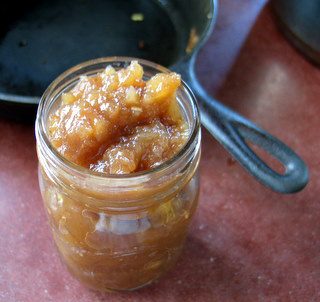 Note: I’ve been in Panera for two and a half hours, have drunk one and a half cups of coffee (only a third of which was caffeinated—I had my morning coffee before I ever left the house), have eaten two buttered hunks of baguette, and have taken two potty breaks (soon to be a third). I will not publish this post till I get home, so I’ll expend at least another half hour of mental energy on this project. Just so you know.

Apple Chutney
Adapted from Beni’s Family Cookbook by Jane Breskin Zalben, a collection of Jewish recipes. Does this mean that I’m committing a sacrilege by recommending that this chutney be eaten with pork? If so, my apologies.

Zalben says you can use other fruits besides apples, mangos and peaches being two possibilities. If you like the citrus-y flavor, add some orange zest as well as the juice.

Combine all ingredients in a heavy bottomed saucepan. Bring to a boil and then lower the heat to simmer. Cook, uncovered and stirring occasionally, for about an hour, or until the mixture has thickened and is no longer juicy. Serve warm.

About One Year Ago: Two Thanksgiving Things.