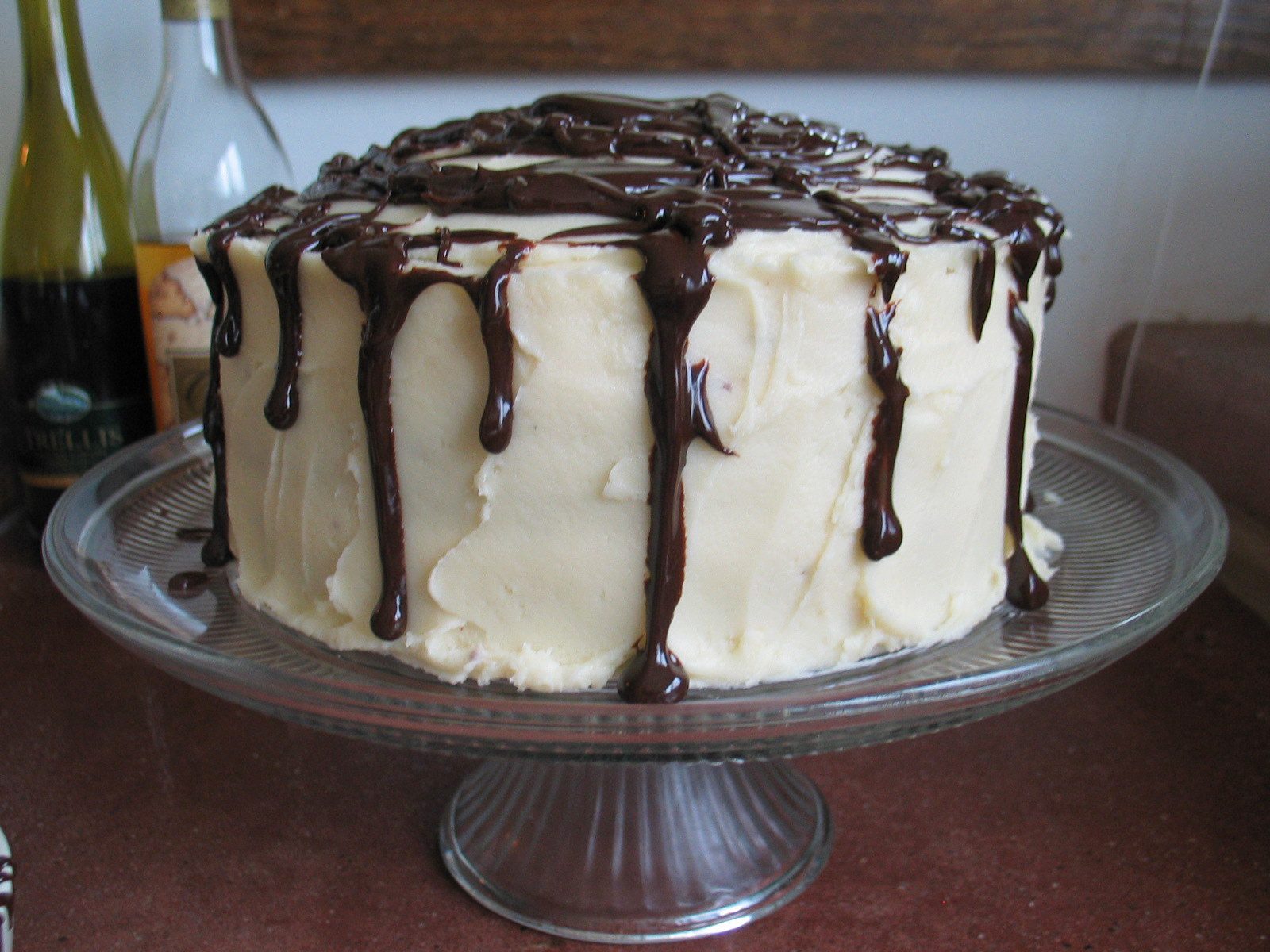 The kids are more or less okay, though their coping skills are melting away bit by bit. I’m sitting on the floor of Sweetsie’s bedroom to type this, waiting for her to fall asleep. She’s in the depths of despair, scared of a Somethingorother, even though it’s broad daylight outside and she has three large windows in her room. I decided not to fight her on this one, though. It’s not wise to argue with a five-year-old who only had six-and-a-half hours of sleep and so much junk food that she threw up at one point (and no, she’s not sick, not in the traditional sense, at least). 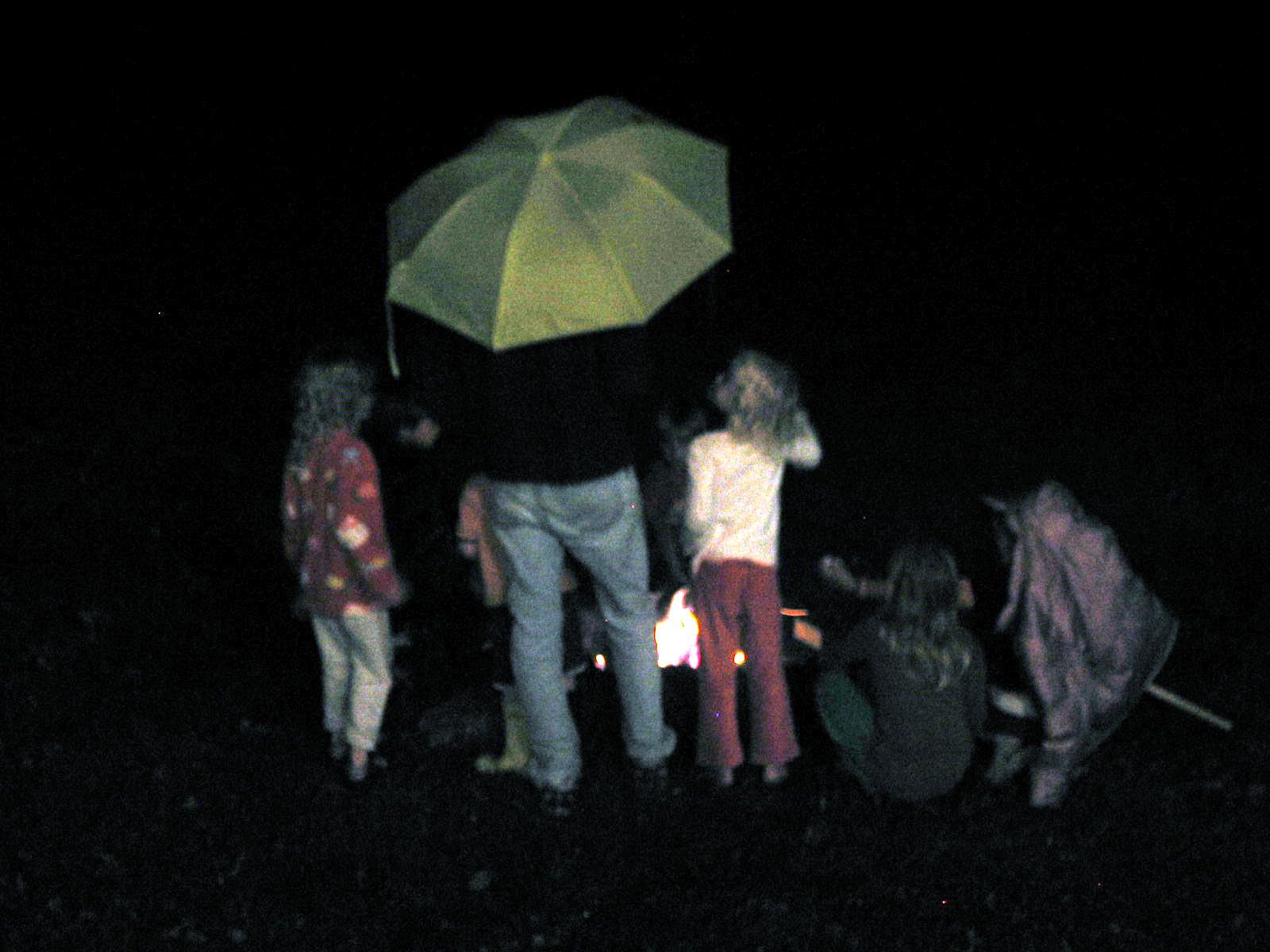 Making s’mores in the rain.

The event was a success, I believe. The boys departed this morning with all their teeth and limbs intact. 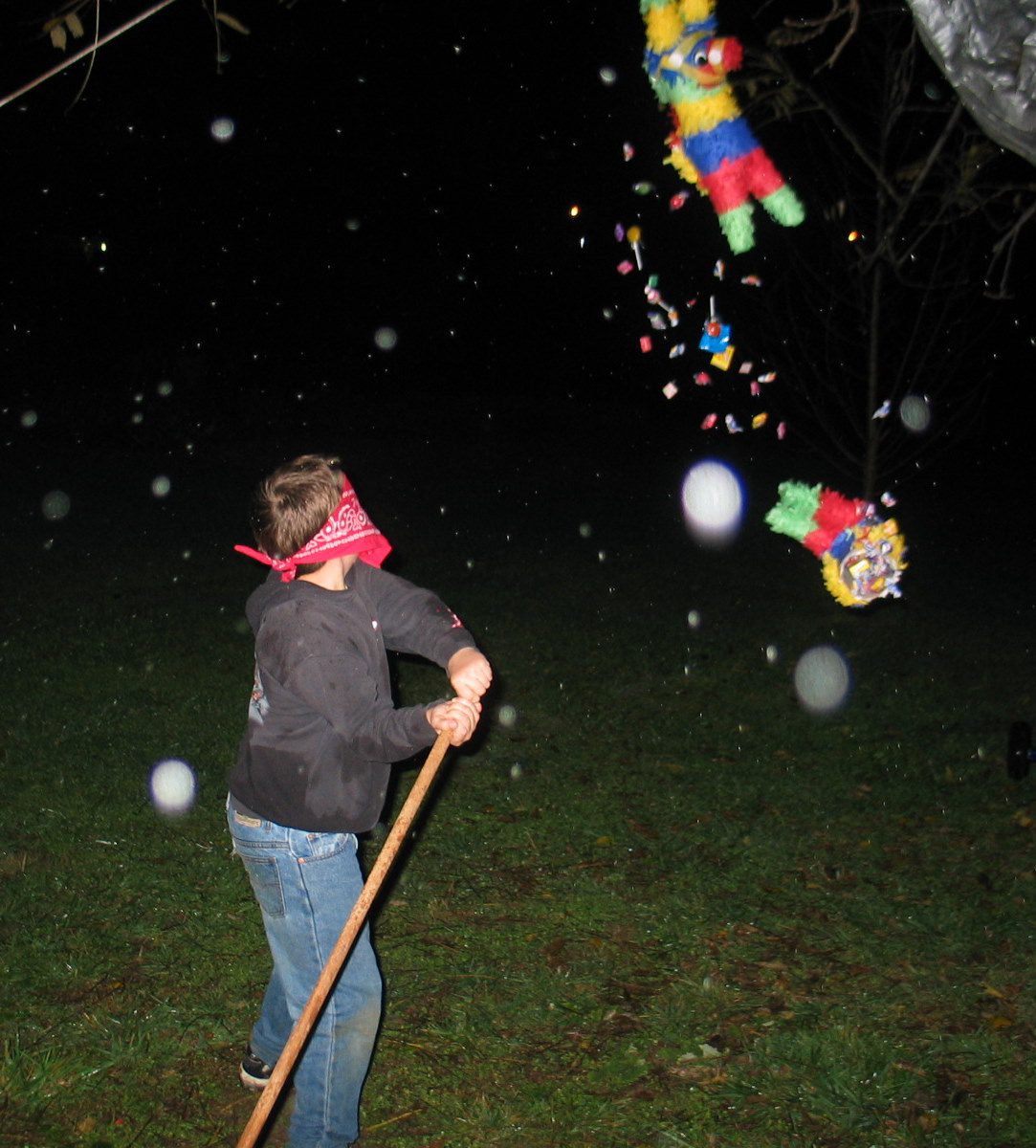 Nobody got hit with the piñata stick, no one fell into the fire… 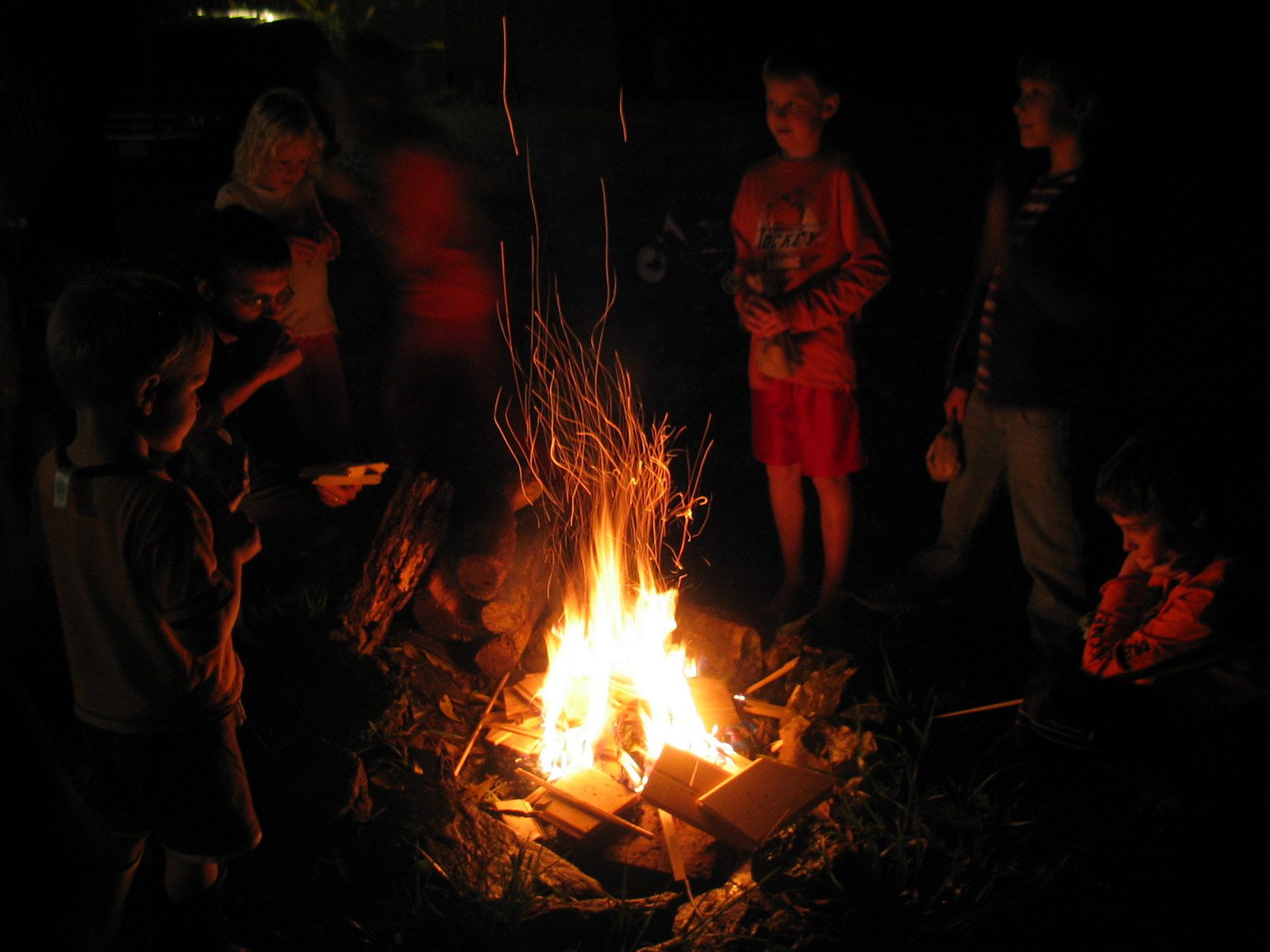 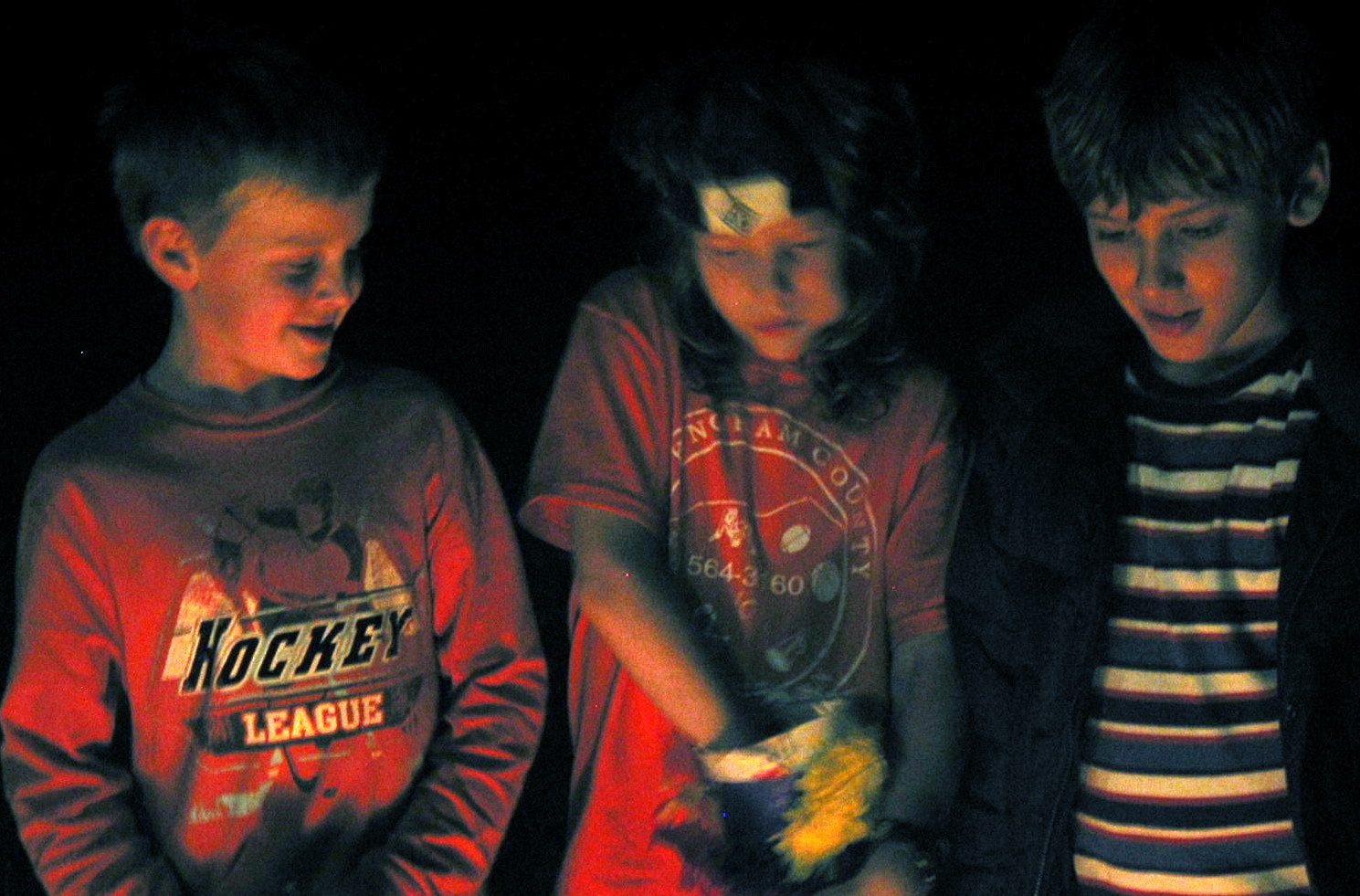 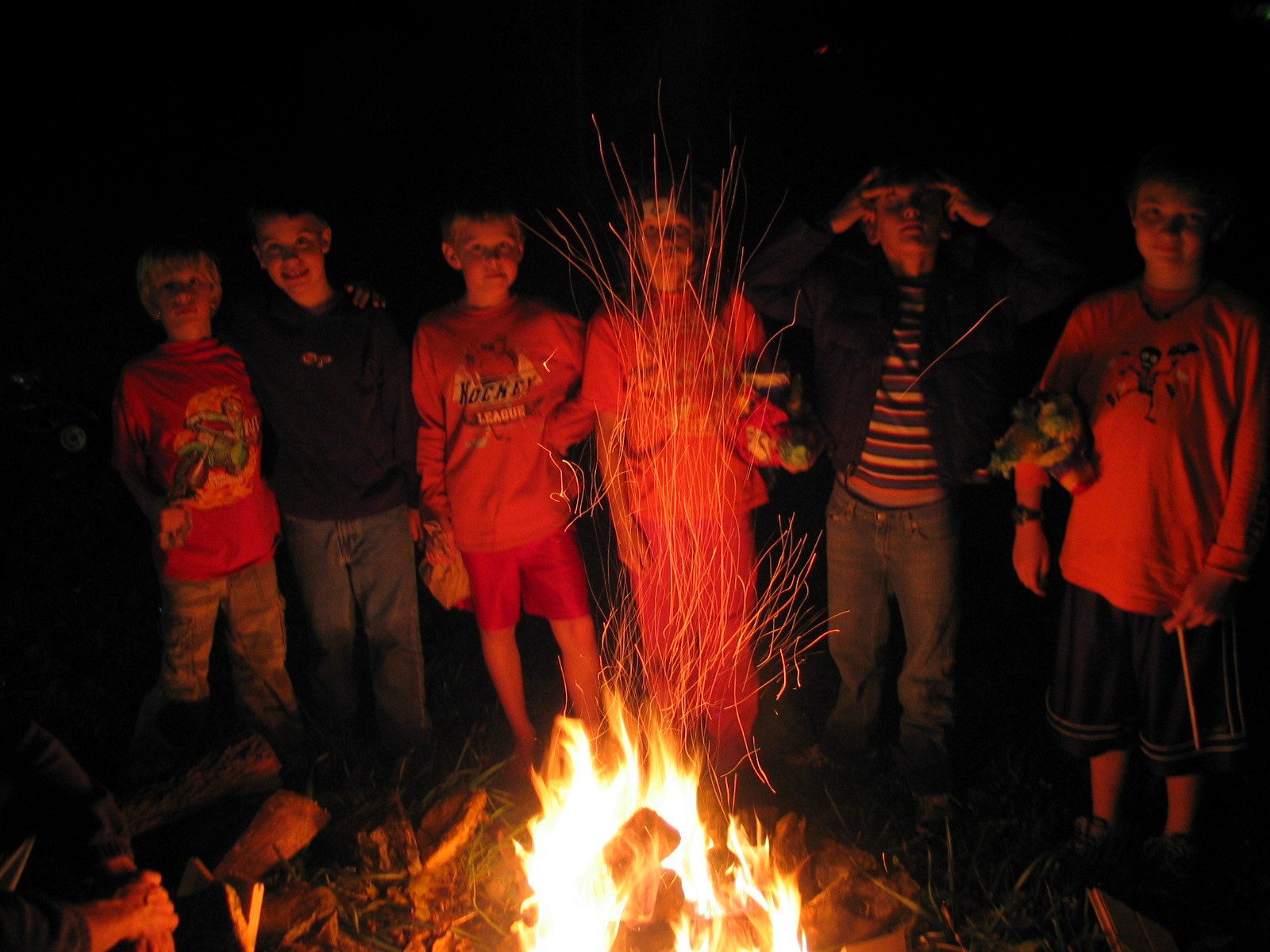 …and no one got run over with the mower (yes, we are hicks—we ride our zero-turn mower for kicks). 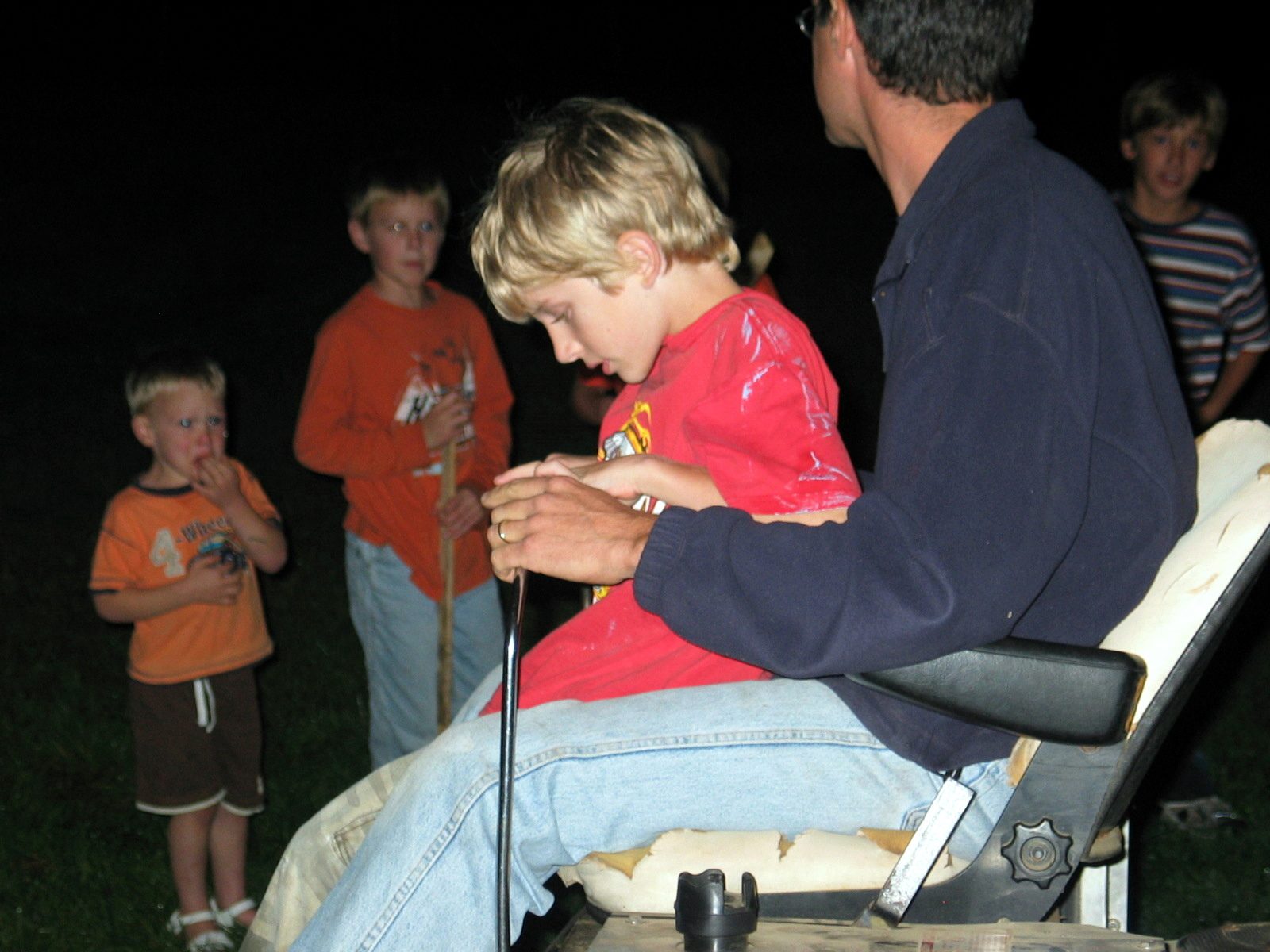 It’s kind of amazing that no one got hurt, seeing as the boys favorite pastime involved running with sticks and brandishing them at each other. 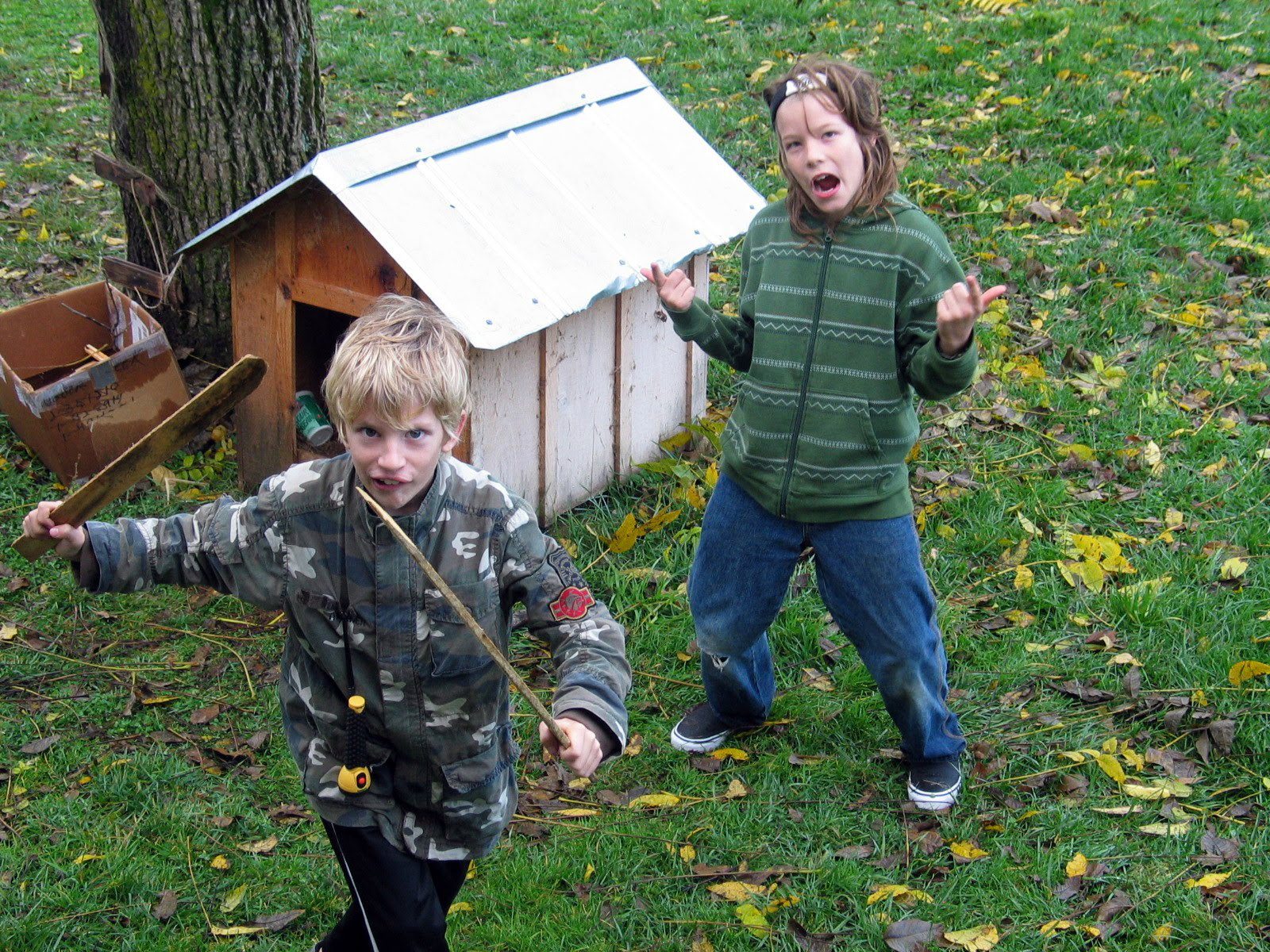 I only yelled once, and that was at 11:45 p.m. when the girls (it was the girls who caused problems) were still up in their little room talking and squealing. My little tirade went something like this: IT IS ALMOST MIDNIGHT AND I AM EXHAUSTED AND IT IS TIME FOR YOU TO BE ASLEEP. I WANT YOU TO LAY DOWN AND TURN THE LIGHT OUT AND SHUT YOUR MOUTHS, JUST SHUT THEM. And then, because I realized I wasn’t sounding all that pleasant and it’s not nice to have to fall asleep with the madam of the house mad at you, I politely added, “And sweet dreams.” They were asleep in five minutes. Lesson learned? Yell at them the first time you tell them to go to sleep. 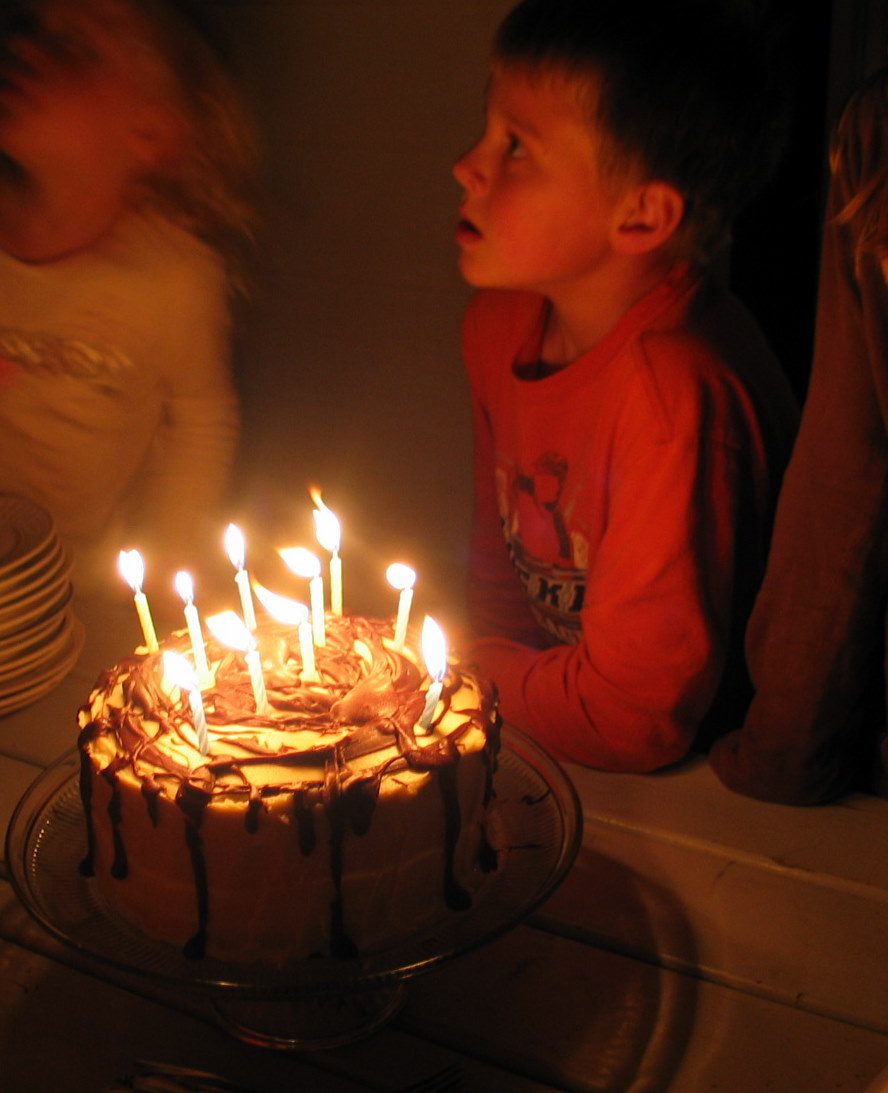 Yo-Yo says that the presents were his favorite part. 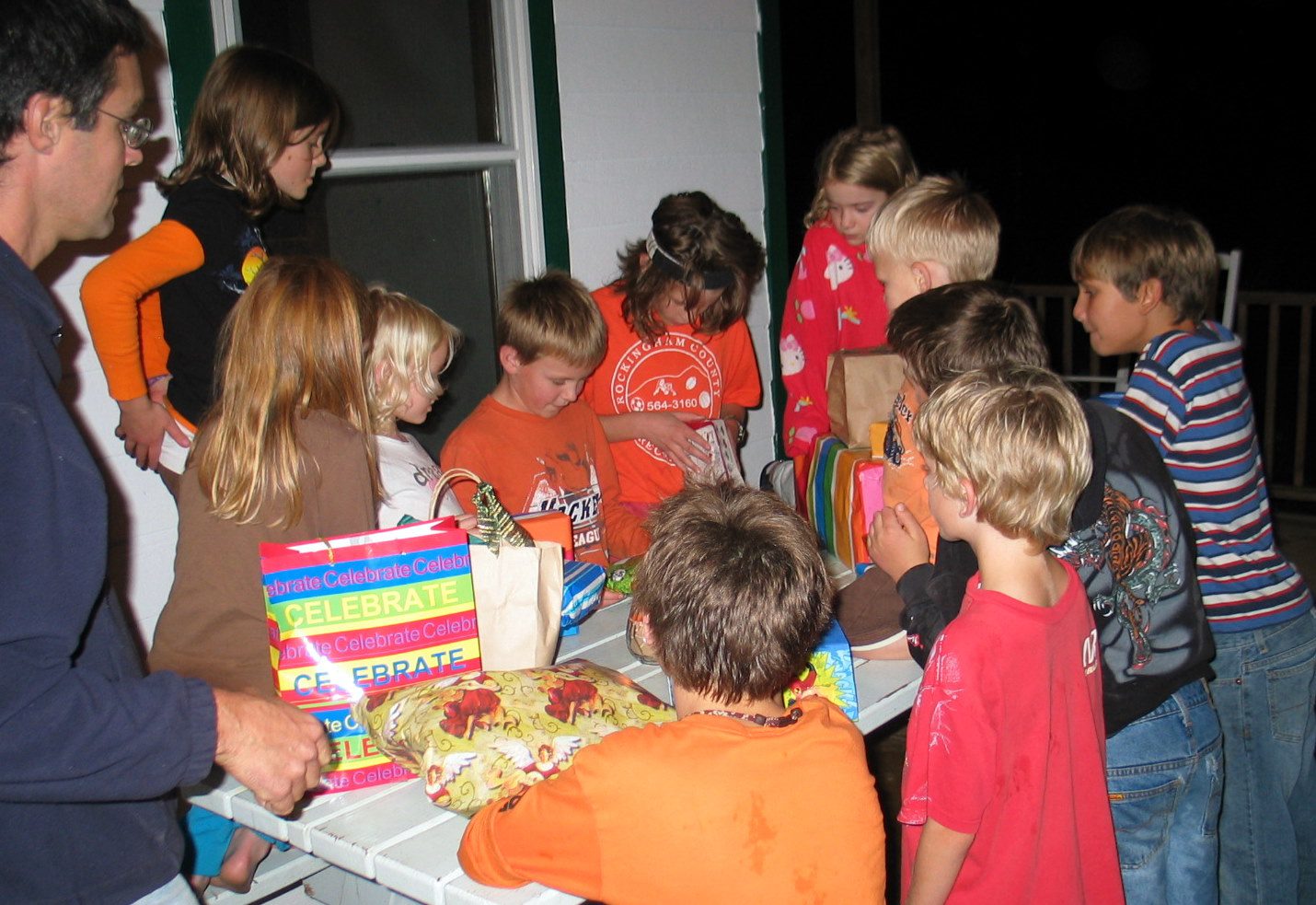 He kept disappearing upstairs to play with them. This was most odd, considering that my son is such an extrovert, but I guess it’s to be expected when you flood a ten-year-old with a wash basket load of toys, books, and clothes. (Even though it might have been normal behavior, it wasn’t acceptable, so we kept hauling him downstairs to mind his manners, consoling him by saying You can play with your toys after your friends leave. Oh, the ironies!) 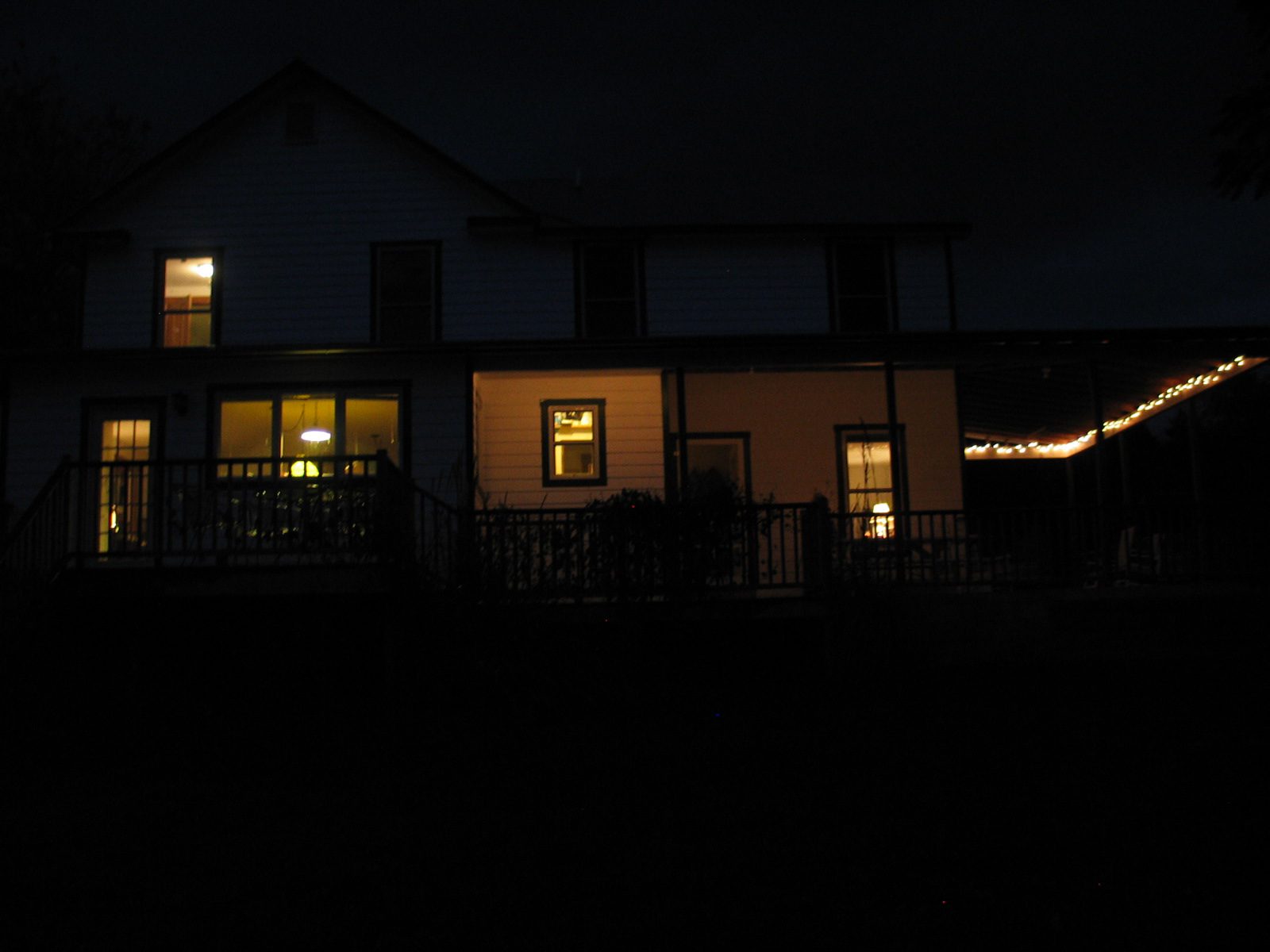 Here’s a picture of the house that the boys weren’t allowed to come into. At my behest, Mr. Handsome rigged up the white lights around the periphery of the porch. He also put a strand of lights in the clubhouse to provide the boy quarters with a bit of ambiance. 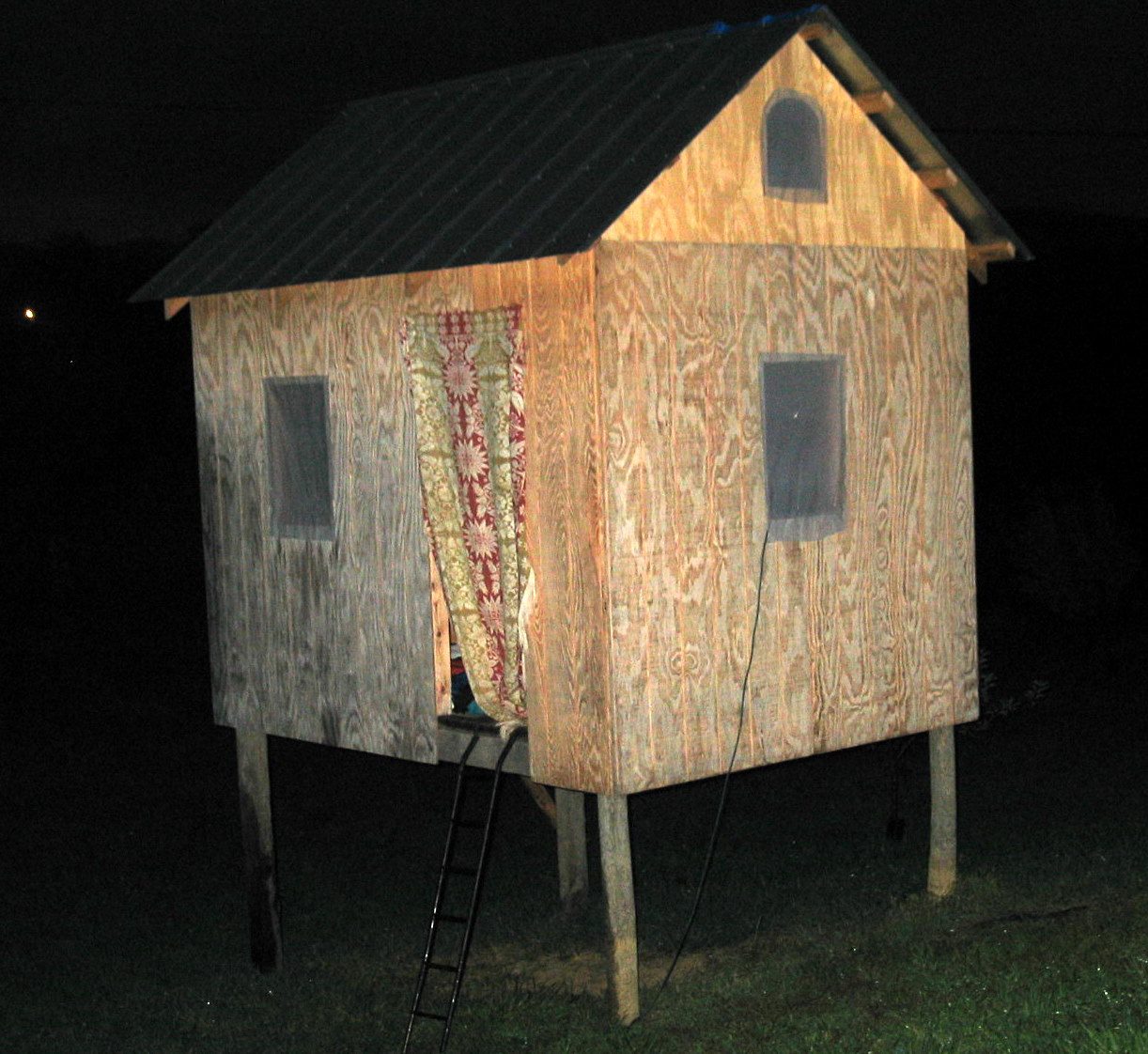 By the way, every parent needs a clubhouse for when their boys have sleepovers. It is such a stress-reducer. All the wet clothes and stinky shoes stayed out of my house, and they could eat popcorn and throw it around and there was no need to chastise them. 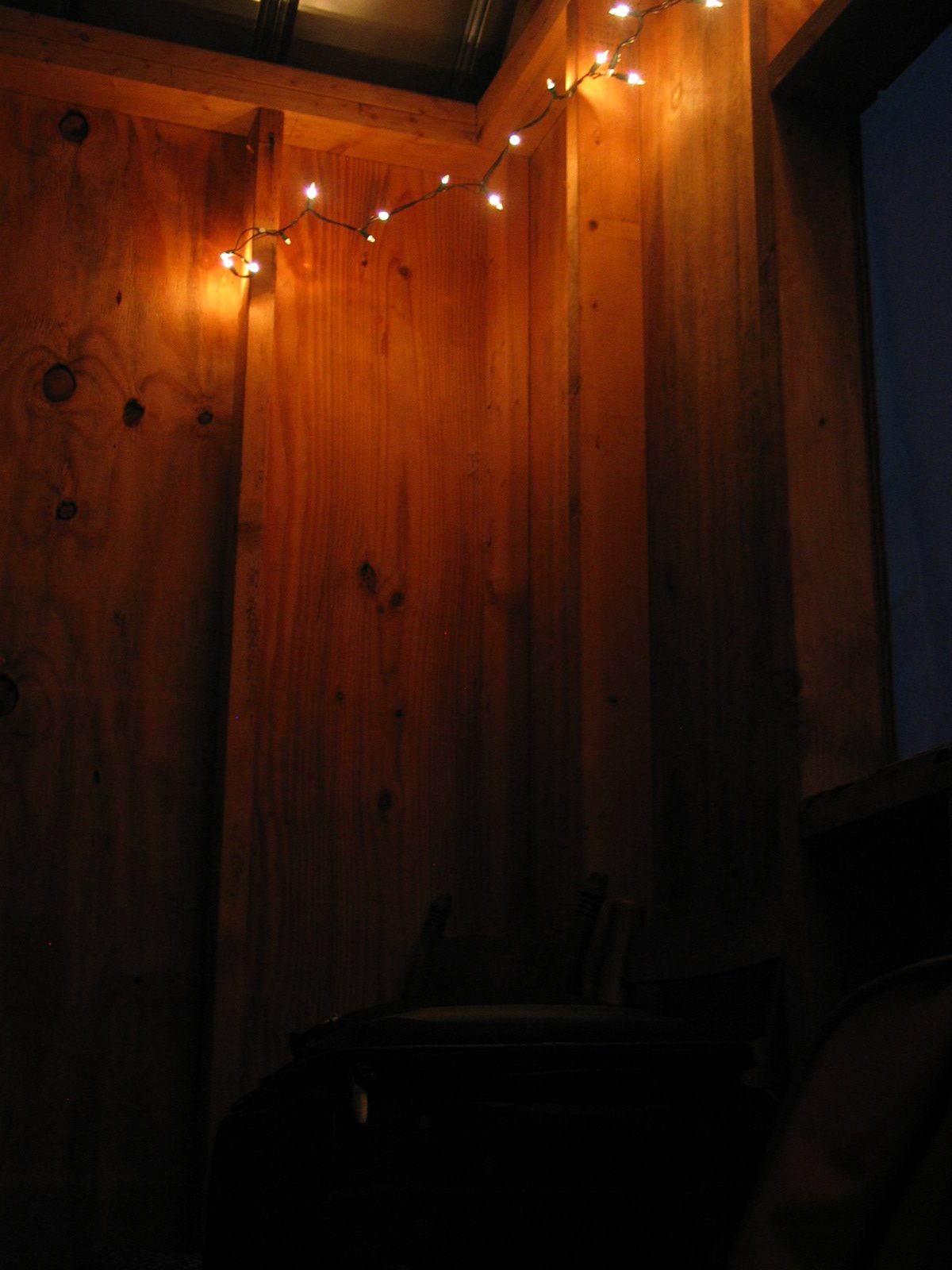 They still managed to wake me up in the morning, though. We had cracked our back bedroom window so we could hear them and at 6:30 I was awakened by whooping and hollering the likes of which should never be heard at that early hour. I sighed deeply, martyr that I am, and shuffled downstairs to make my coffee. Soon Yo-Yo stuck his head in the door and plopped a large-sized toad on the floor. Shortly after that, another boy appeared at the door with a freshly laid egg, and then, a little later, he appeared with another one. I almost asked them if they were squeezing the hens to pop out the eggs, but then decided against it—I didn’t want to give them any ideas.

Before long, kids of both genders started harassing me for breakfast. By the time I was nearly done frying the pancakes, they were almost in a panic, pressing up against the doors, watching my every move, and even daring to enter my domain. For that I yelled, and Mr. Handsome shooed them out, explaining my bad behavior to the boys by telling them I was The Wicked Witch of Northwest Rockingham County. Yep, that’s me alright. 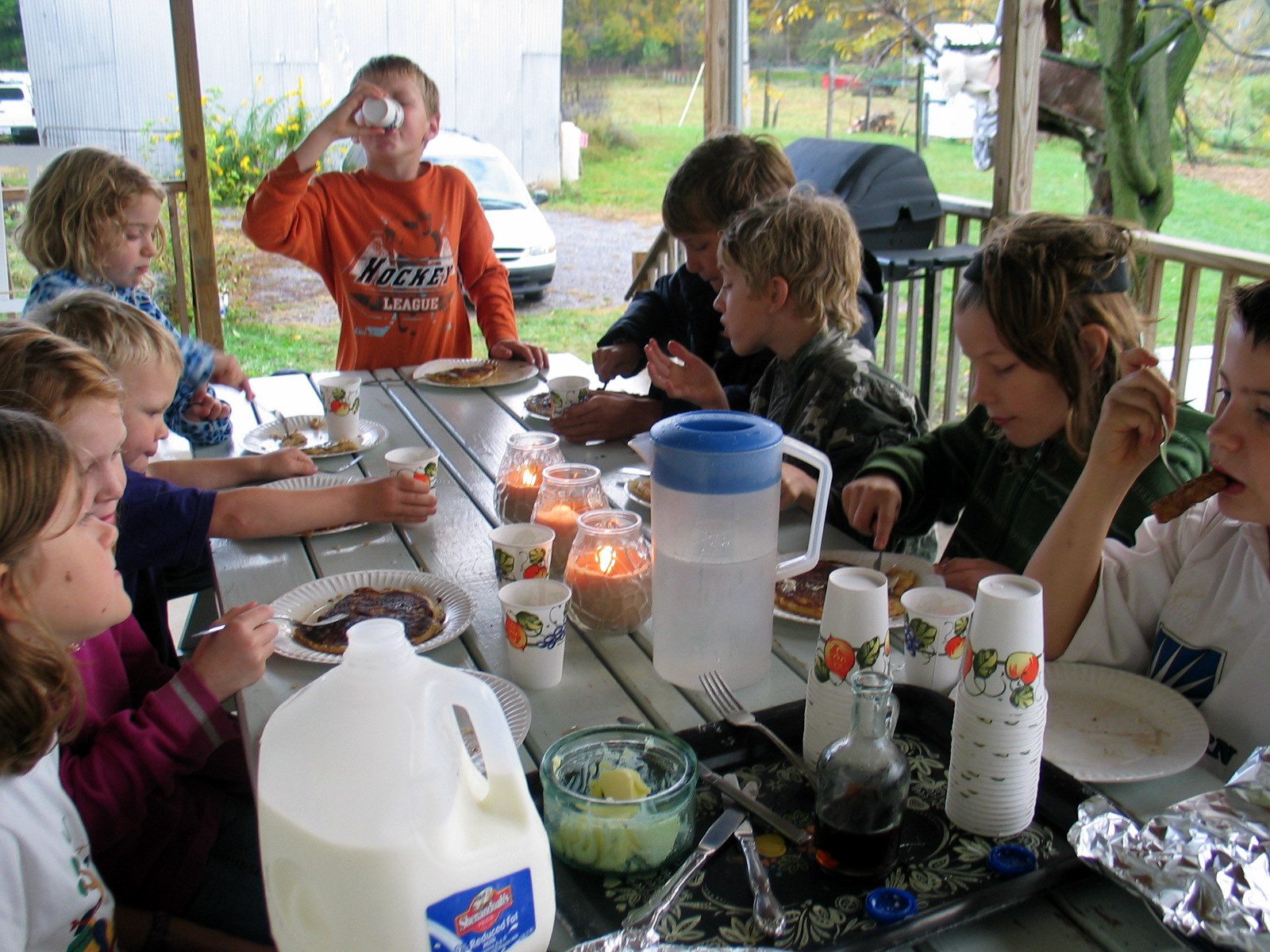 The kids scarfed their giant-sized pancakes and sausage links and slurped down multiple cups of milk. Wouldn’t you know, I ended up pouring the syrup and buttering their pancakes. It was easier that way. I just stood at the end of the table and served (and refilled) everyone’s plates for about ten intense minutes, and then, quite abruptly, the meal was over. 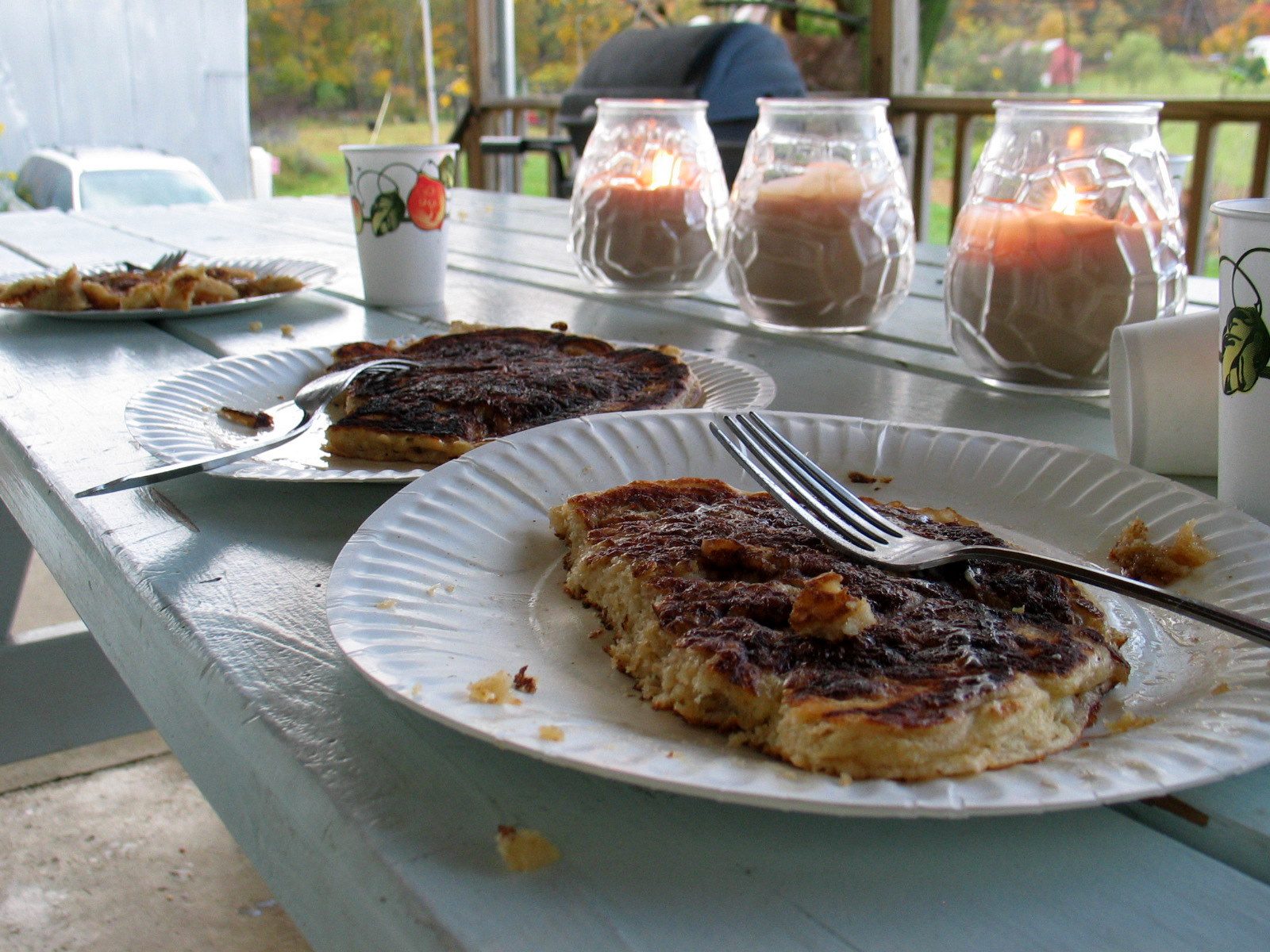 Buttermilk Pancakes
I’ve gotten this recipe from different sources (Aunt Valerie is one, of course, and my girlfriend Michael Ann), so I think it’s probably a well-known classic.

Stir together the dry ingredients in a large bowl.

In another bowl, stir together the wet ingredients.

Pour the wet ingredients into the dry and stir gently until the ingredients are just barely combined (there should still be lumps in the batter).

Cook the pancakes on a buttered cast-iron skillet.

Serve with lots of butter and syrup (either the real stuff or the imitation).

About One Year Ago: Signs, news, and daydreams.