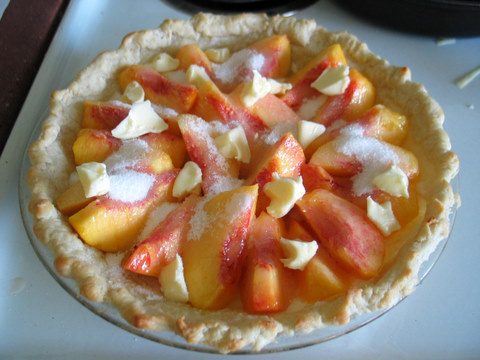 Peach season is over for me, but I feel obligated to tell you about the peach tarts that I’ve been making because while you may not get to make it this year, you’ll at least be able to have the recipe ready, butter crusts crimped and in the freezer (if you have room), right at the very start of next year’s peach season. You can thank me later, too.

I always thought that peaches were best eaten fresh and that baking them was rather futile and practically downright sinful, seeing as there was no way the lush fruits could be improved upon. But I was wrong. Baked peaches are incredible. They shrink a little, the cut edges firming up just enough to seal in the juices. If anything, the flavors are intensified, and when paired with a rich, crisp butter crust and topped with whipped cream, well, it really can’t get much better. 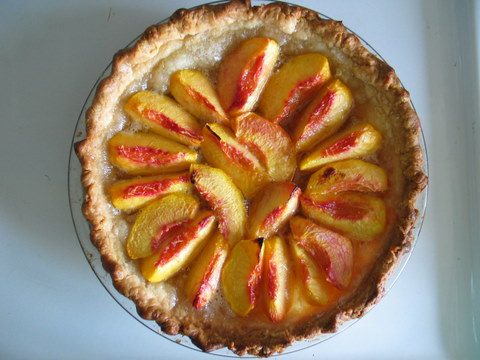 (Ooo, you wanna know something? Nectarines are almost just like peaches and they are in season right this very minute, so I guess it’s not too late to make this pie after all, lucky you.) 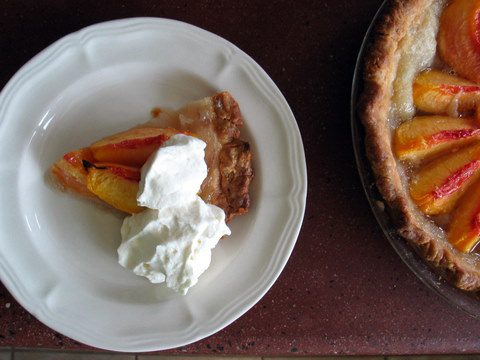 This tart is basically just peaches and crust, so it’s important to use a really rich, delicious crust, one that calls for people to lick clean their plates. Make your favorite, richest pie crust, or do what I’ve been doing and make Deb’s butter crust (recipe follows).

Because I don’t have a tart pan (I keep my eyes peeled when I go thrift shopping), I use a regular pie pan. Just go about half-way up the sides with the crust (you’ll have a little leftover pie dough), because the resulting ratio of crust to peaches will be too high if you make a full-blown pie crust (as you can see from the pictures, that’s what I did, and while it wasn’t any hardship eating all that crust, I think it would be best with a little less).

One of the “problems” I’ve had with this pie is that the peach juice doesn’t thicken and once you cut into the pie, the liquid runs off, and what doesn’t run off soaks into the bottom crust. I suppose I could toss the sugar with a tablespoon of flour or cornstarch, but I haven’t tried it yet because I like how absolutely simple and basic this tart is and I don’t want to go messing with that. As it is, the top part of the bottom crust gets soft and gooey, kind of how the dough gets on an apple dumpling, and the bottom part of the bottom crust stays crisp and buttery, so it’s not really a problem, if you ask me—I’m just telling you how it is so you know what to expect. However, the pie is best eaten as soon as it has cooled to room temperature, though I have eaten leftovers several days out and the pie still possessed the swoon factor.

Important: make sure the crust is darkly golden brown on the bottom and the sides. I bake my pie on a preheated baking stone, first for the fifteen minutes of pre-baking and then for the full fifty minutes that it takes to bake this pie. If you have trouble with the edges getting too dark, put a piece of foil with a hole cut out of the middle (so the center part of the pie will continue to darken) atop the pie.

Sometimes I turn the broiler on at the end of the baking time, just long enough to caramelize the tops of the peaches.

I’ve peeled my peaches, but I really don’t think you need to. I made another pie that called for un-peeled peaches and I hardly even noticed they were there, and when I did notice, I really liked it. If you use nectarines, definitely do not peel them.

Sprinkle three tablespoons sugar over the bottom of the partially baked crust. Arrange the peach wedges in the crust, peel sides down. Pack them in tightly, but don’t overlap them too much. Sprinkle the remaining sugar over the peaches. Dot with butter. Bake the pie at 375 degrees for 40-50 minutes, till the crust is golden brown (if the edges darken too quickly, cover them with foil) and the juices are bubbling. If you want the peaches to be caramelized and slightly blackened, briefly broil the pie at the end of the baking time, watching very, very closely.

Cool to room temperature before cutting and serve with the optional whipped cream.

I’ve started to make Deb’s crusts about two weeks ago, and since then, I’ve made the recipe three different times (that would be six pies). I like this recipe for three reasons: first, it’s delicious, second, the recipe is simple to make and can be made ahead of time and stored in the refrigerator and/or freezer at different points in the process, and third, the proportions are a cinch to memorize so now I always have a pastry recipe that I can make without even thinking twice. Go ahead and try it. I think you’ll like it.

Stir together the flour, salt, and sugar. Using your fingers, crumble in the butter. Do not mix it in all the way—you should still have pea-sized chunks of un-mixed butter when you are finished. Stir in one-half cup of ice water. At this point my dough comes together just fine, but if you need a little more water, go ahead and add it, a teaspoon at a time. Do not over mix.

Divide the dough in two parts, form each part into a disk, and wrap each disk in plastic wrap. Chill the disks in the refrigerator (or bag them up tightly and freeze them).

When you are ready to shape your pie crust, allow the disk to sit at room temperature for about five minutes to soften just a little. Unwrap the dough, place another piece of plastic wrap on top, and roll out the dough. Put the rolled dough in the pie plate, fold over the edges and crimp. (If the dough gets too soft to crimp—mine always does—allow it to stiffen up in the freezer for five minutes before continuing.) Pierce the bottom and sides of the pastry with a fork, about thirty jabs.

Place the crimped crust in the freezer till it is rock solid—about thirty minutes—before baking. When you are ready to bake it, press a piece of tin foil down into the pie plate, pressing down hard all over the pie and all the way up the edges. (You may put some dried beans or pie weights in the pie, but I have neither right now, so I skip that part.)

Bake the pie at 400 degrees for ten minutes. Remove the pie from the oven. Carefully peel off the foil. Using the back of a spoon, press down any bubbles in the crust. Return the pie to the oven (reserve the foil for the next time you bake a pie pastry) and bake for another five minutes for a partially baked crust. If you want a fully baked crust, bake it longer, probably another 15 minutes or so (I haven’t done this, so I don’t know how long it would take).

One Year Ago: Thoughts on breastfeeding a large toddler/little boy. He’s weaned now, in case you wondered, not that I have anything against nursing three (or four, or five?) year-old kiddies.