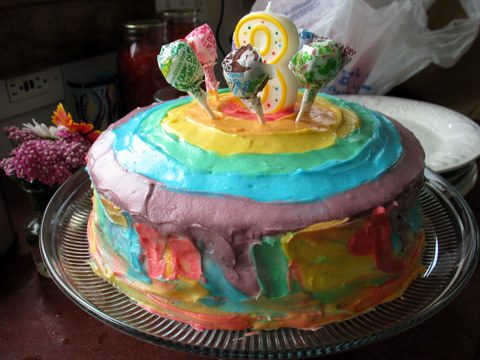 Introduction: I’m in one of my writing dry spells, wanting to write but not know what to say. Oh, I have lots to talk about, but I don’t know how to talk about it. The bigger, more interesting topics (The Sex Talk, Saggy Arms, Marital Issues, etc) feel daunting, like rugged mountains waiting to be climbed by me, a flip-flop clad almost-middle-aged woman with four kids, and all the little stuff just feels like, well, little stuff. Reality can be depressing if you stop to think about it. Let’s move on.

Tangent A: Maybe this word lethargy comes as a result of just finishing my third book by Elizabeth Strout, her first (Amy and Isabelle). Strout writes as though her pen were a scalpel, using it to cut into each conversation, to separate out the head nod, the tissue thrown into the trash can, the fans whirring uselessly over in the corner of the office mill. With each slash of her pen-turned-knife, she peels back the layers, drawing you in to a life that is not yours. It’s exhausting, this being there without being there, and when I finally read the last sentence and closed the book, I felt as if I needed to rest for a couple days while I waited for the story to settle and I could reorient myself to my surroundings. Still, even a couple days after finishing the book, I’m gasping for breath, feeling rather short on both oxygen and reality. I continue to mull over the characters and the plot (Paul Bellows found that blue car way too easily, it seems to me), savoring her phrases in the same manner that I run my tongue over my back molars after eating a piece of caramel candy, searching for the lingering bits of sweet.

Main Point: But life goes on, regardless of what novels I’m reading (or recovering from). Yesterday Miss Becca Boo turned eight, disrupting the odd numbered age streak we had going for the past few months.

Tangent B: When people asked how old my kids were and I rattled off their ages—“three, five, seven, nine”—it gave the impression, I thought, that my children were orderly and predictable, thus making me a Good Mom. Now that they are three, five, eight, and nine, I feel discombobulated; they have fallen out of line and I will have to work extra hard to keep them in their place. I have lots of time to get used to this new feeling because it will be seven long months before they fall into position again, this time in an even-numbered line. (I like the odd-numbered line-ups better since they make me feel bold and daring; the even-numbered ones feel bland in comparison. Is that weird?)

Tangent B ½: Obviously it’s a Sunday afternoon and I have some extra time on my hands, time when I can analyze my children’s ages. It’s nice to ponder and type and ponder some more, especially now that I’ve gotten over my little writing hump. I knew that if I just carved out some computer time and set my fingers over the black keys, then the words would come (I hoped)—it’s The Getting There that’s the hardest.

Main Point, revisited: So Miss Becca Boo is eight. Because her birthday fell on a Saturday, we had her special meal at noon, the table dressed with a cloth, an old-fashioned creamer filled with flowers, and real wine glasses for the ice water (it’s a grand occasion indeed when we put ice cubes in our water). As we ate our lunch of baked macaroni and cheese and her Grandma Betsy’s buttered carrots (the first food she mentioned when I asked her what she wanted for her birthday meal), we retold the story of her birth. (The kids are becoming quite familiar with their birth stories so that when I launched into the part about calling Matt and Crystal to be with toddler Yo-Yo while we went to the hospital, Yo-Yo jumped in and told how I had to impatiently wait while Mr. Handsome made himself a big ol’ breakfast before we could actually leave for the hospital.) We’re all fairly comfortable talking about the details of birth (and sex, but that’s another topic), but when I got to the part about the final gigantic push and how I didn’t heed the midwife’s order to stop and as a result had some tearing, Mr. Handsome said, “Alright, that’s enough. I’m eating.” Of course that got Yo-Yo’s goat and he launched forth on the topic of Gory Births until Mr. Handsome gave him a gigantic hairy eyeball.

Tangent C: Speaking of getting goats, while I was washing the dishes this morning, Mr. Handsome came up beside me and said, “Wouldn’t it be nice if we just decided to stay home from church? We could hang out and relax…” (We’ve been through this many times before, and while I’m not opposed to skipping church every now and then, I can not handle last minute decisions to opt out—it messes with my fragile brain. As a result, about a year ago I declared a moratorium on deciding to skip church on Sunday morning; if we’re not going to go, then we have to decide that the night before—it’s the rule.) So, as you can see, Mr. Handsome was just trying to get my dander up. (He also has a bad habit of picking fights first thing in the morning because it helps to jumpstart his brain.) But this morning I remained unperturbed and simply stated, “I put my goat out to pasture so you can’t get it now.” He snorted at my joke and then asked, “Where did you hear that one?” And I said, “I made it up myself. I’m a very funny person, you know.” And then we went to church.

Main Point, revisited again: Back to Miss Becca Boo’s birthday: we gave her a guinea pig for her present. 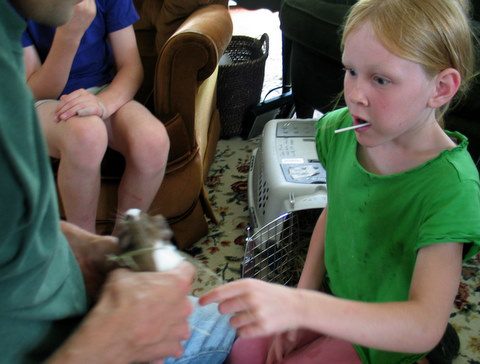 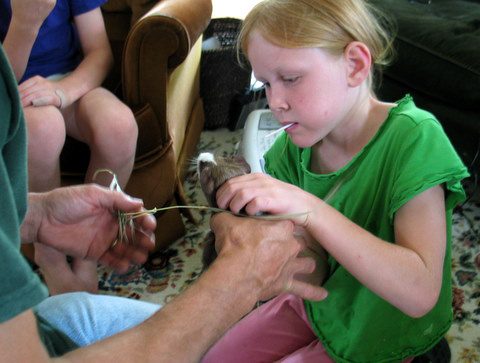 She’s the animal lover among us, and once it occurred to me that a guinea pig would be a good birthday present, I fixated on it, certain that it would be the only acceptable gift. 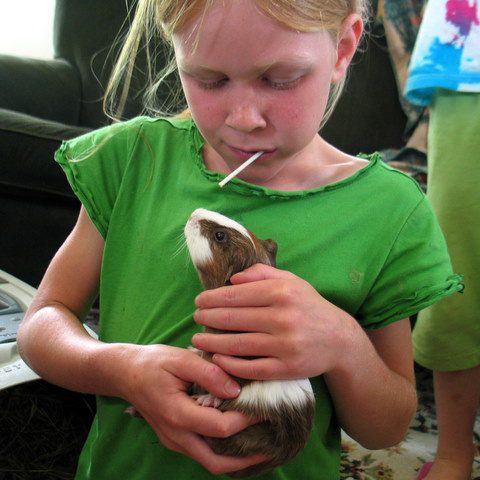 Tangent D: I have a hard time buying presents for my children. Birthdays are a big deal in our house. Because we don’t buy Christmas gifts (we do the stocking thing though, and I’m just now beginning to figure out that stockings have the potential to be quite extravagant—changes will be made in the near future, mark my words), birthdays are the one opportunity to do it up good. However, I still can’t figure out how to buy good gifts for my kids; it remains a hit or miss proposition. For example, I thought for sure that the two-storied, multi-roomed dollhouse that I found at a thrift store would be just the thing for Sweetsie but she has almost never played with it. Yo-Yo’s poster for his wall is now in his trash can, and his hefty, battery-powered jeep sits silent, both his interest and the jeep’s battery having gone kaput. The ballet and karate lessons were taken and enjoyed (mostly), but there were no requests to continue. Sweetsie’s tricycle is damaged, but still gets played with occasionally. The butterfly barrettes were ignored, necklaces broken, ponytail holders lost, fuzzy socks never worn. As you can see, finding a gift that provides both a thrill and lasting enjoyment is a tricky endeavor.

Main Point…yup, still going strong: I’m afraid the guinea pig was a little disappointing at first. I mean, there were no bells and whistles and the poor dear was terrified and we didn’t know what we were doing and, well, it was pretty intense for awhile. Miss Becca Boo’s other gifts of guinea pig pellets, a water bottle, and a book on (you guessed it) guinea pigs weren’t that thrilling in and of themselves. But, as Mr. Handsome said last night, it’s the kind of gift that will grow on her—it takes time to make friends with a rodent.

The question of a name remains to be solved. I suggested Miss Piggy, or maybe Porky. Mr. Handsome suggested Tikki tikki tembo-no sa rembo-chari bari ruchi-pip peri pembo. Yo-Yo though Sparky. The Baby Nickel suggested Jessie, and Sweetsie said Sally. Miss Becca Boo thought Sandy at first, but finally settled on Sparky, though I hear them saying “Sally” a lot and I still refer to it as Miss Piggy, or sometimes The Rodent (though I try not to say that in Miss Becca Boo’s presence as she’s quick to take offense).

We were all a little worried about Sparky at first. She didn’t eat or drink anything, though we plied her with the best we had—bananas, grapes, cherry tomatoes, broccoli—but it wasn’t till today that she started eating … and pooping. I bet you never knew guinea pig poop could be so exciting. The kids squeal over each little black turd that appears on the ground, excitedly counting them (“…eight, nine, ten—there’s ten, Mama!”) as though they are prize jewels and not little pieces of rodent crap. She’s also becoming a little more comfortable with all the floor thumping and shrill shrieking and sudden movements that come about as a result of six, highly opinionated, boisterous people living in close proximity. 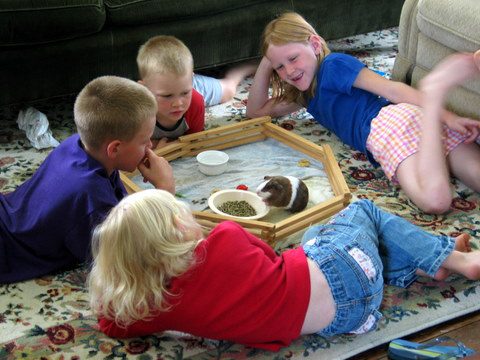 Miss Becca Boo requested a chocolate cake with rainbow icing. Considering that I’m quite weak in the cake decorating department, I did the best I could. 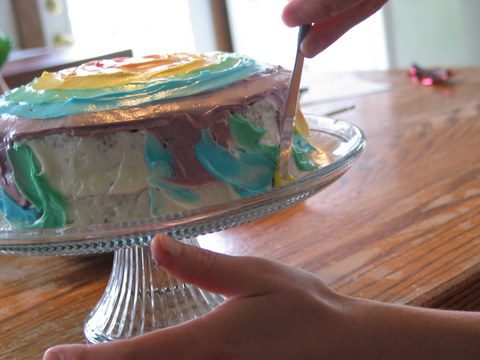 I made my basic chocolate cake which comes from one of my Tiny Little Brother’s roommates, a boy named Arthur that I never (I don’t think) met; I’ll have to tell you about it sometime. I put a thick layer of peanut butter frosting (ooo, I could live on that stuff) between the layers and then made an extra big batch of buttercream frosting. I frosted the sides with white icing and sealed the top with a thin layer of the white icing. Then I divided the remaining frosting between six bowl, and, with my entranced children watching (only Miss Becca Boo was allowed at the table, the other three were lined up on the kitchen stools a safe distance away), I squirted drops of coloring into each bowl while Becca Boo stirred, transforming the plain white icing into a multitude of colors: blue, purple, red, green, orange, and yellow. 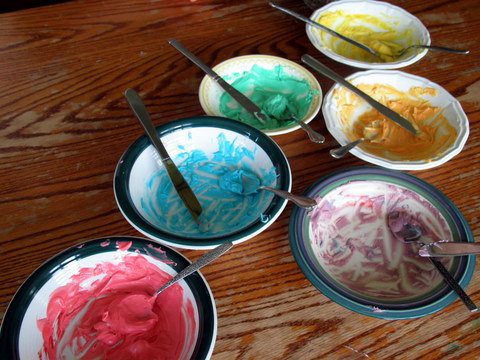 I made up the design as I went along, a rainbow circle on top, tie-dye swirls on the sides, and a blur of colors at the very base, as the children oohed and aahed, told me I was the best cake decorator ever, and tried to swipe tastes of icing.

Conclusion: In a nutshell, that’s what’s been going on.

One Year Ago: Strawberry Cake.