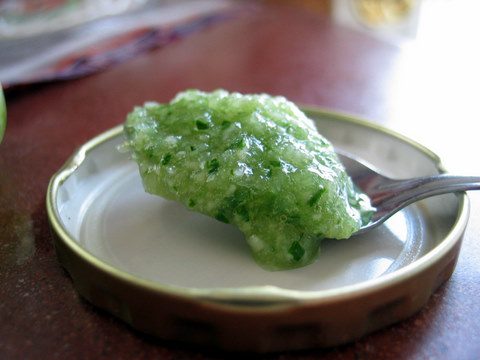 Have you ever heard of tempero?

I hadn’t, not until several months ago when I had that coffee date with my friend Michael Ann and she enthusiastically enlightened me. She said, “All you do is blend up onions and garlic and herbs and leeks with lots of salt and then you keep it in your fridge for months and you can add it to everything—soups, eggs, beans, meats, whatever.

I was dubious. “Doesn’t it make all your food taste the same?”

And she did. I read it and filed it away until last Thursday when I unsuccessfully tried to pull my garlic. The stalks kept breaking off in my hand, leaving the fat garlic heads buried, or worse, only half the bulb came up, so I had to go fetch a shovel and dig the bulbs up (and then I still had trouble—those were some stuck heads). I wove the intact heads of garlic into two braids and set aside the mutilated heads till the following day when I would have more energy to figure out how to deal with them.

When I woke the next morning, I pondered my options (one of which was this, but I read somewhere that this is an excellent breeding grounds for salmonella—is that true?), and it was about then that I remembered Michael Ann’s tempero (pronounced “temPAREoh”). Didn’t it call for a lot of garlic and onions? I flipped through my red, three-ring recipe binder until I found her neatly typed recipe. I noted happily that I had everything but the leeks and scallions; I would increase the onions and call it even.

Out to the garden I again went, this time to pull some of the bigger onions and pick the basil and parsley, and then I commenced to peeling and chopping and processing, all the while basking in the sanctimonious bubbly feeling that washes over me whenever I combine multiple, fresh ingredients in a single recipe. It’s a pleasant sensation indeed when my everyday grind melds with both the practical and the gourmet. It makes me feel like crowing. 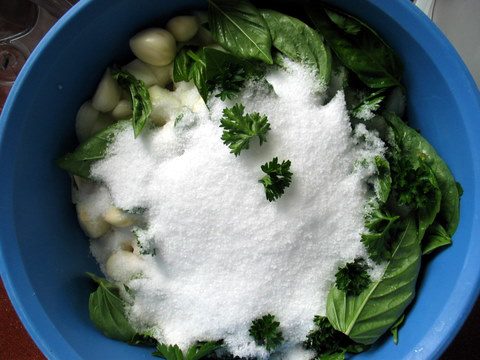 Of course I didn’t know for sure if the recipe itself would be any good. I was still a little doubtful, though I certainly had no right to be considering that my friend is an absolute whiz in the kitchen and has a genius for the savory (you ought to taste her killer soups). But still…

I should definitely not have doubted her. In less than a week I have used up over a cup of the pungent green sauce. So far I have used tempero in the following ways: simmered with unsalted, precooked pinto beans; sauteed with zucchini; briefly cooked in hot oil as a base for wilted Swiss chard; mixed into the sausage I was browning (it made the sausage extra salty, but I’ll be adding it to a soup later); and stirred, uncooked, into tuna salad.

In regards to the question I first asked Michael Ann—whether or not tempero will make all your food taste the same—it won’t, at least not any more than adding onions and garlic to all your savory dishes makes them taste alike. It’s like a liquid version of seasoned salt, and while I’m not one for seasoned salt, I do add fresh garlic and onions to most of my savory dishes, and in essence, that’s all this is—instead of having to peel and chop my garlic and onions every time I need them, I can simple dump in a blob of tempero. It’s a marvel! 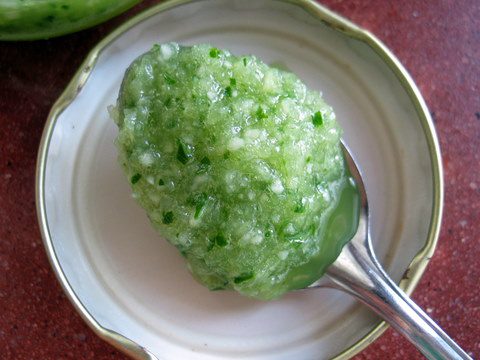 I did a little research after I made the tempero and found some information that made me fall in love with the sauce even more than I already have, as if that’s possible. Rita says (the post also contains her recipe), “It works almost like your signature flavor that everyone can recognize on your cooking without really knowing where it comes from… that certain something that makes your dishes unique.” Is that not totally classy? Don’t all cooks secretly lust after a signature flavor? (Don’t even try to tell me I’m the only one—you can’t fool me.)

And if you want to read more about the history of the Brazilian sauce and how to use it, click here.

Tempero
From my friend Michael Ann.

Notes from Michael Ann: “Remember that the tempero is made up of raw ingredients and is not intended to be a sauce itself or to be used on its own. The mixture is an ingredient in other recipes and most of the time will be cooked with them. Keep it in the refrigerator to add to other sauces and recipes in small amounts, starting with half a tablespoon and tasting as you go.” All the tempero needs is a quick sizzle in some oil before adding the other ingredients, or it can be added directly to simmering soups and sauces. It also serves as a rub for meats. The options are countless, countless, I tell you.

And she adds, “Warning: It’s hell on the eyeballs with all those onions.” True, I screamed and hollered and jumped about, but it wasn’t all that bad, nothing a brave grown-up couldn’t deal with. The pain was short-lived, and the payoff is tremendous—the stuff lasts for months.

I’m giving you Michael Ann’s recipe as is, but I omitted the scallions and leeks and upped the onions to three pounds. You could also add green pepper, if you wish.

Mix all the ingredients together in a large bowl. Working in batches, add the vegetables to a food processor and process until smooth. Transfer the batches to a large bowl and combine until the entire mixture is smooth. Transfer to lidded glass jars (or plastic containers) and store in the refrigerator (or freezer) for 6-8 months.

About one year ago: What to do with brown bags.