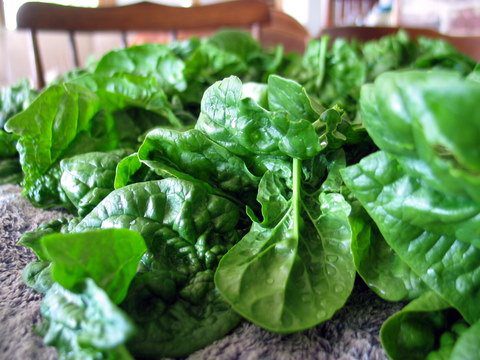 You guys hold such power over me. You know that, right? It’s like I’m a puppy on a chain, and you hold the other end. Sometimes you yank my chain just to see me bark. Other times you tie me up to a tree and walk off, leaving me alone to howl at the moon. Sometimes you relax your grip, content to let me take you for a zig-zaggy hike through the bunny trail-infested woods, and other times you take a firm grip on the chain and strike out on a path of your own choosing, expecting that I’ll trot along faithfully at your heels, which I do, wiggly-waggly hindquarters, puppy dog eyes, and all.

Zoe grabbed hold of my chain this morning when she asked how I freeze spinach. I was going to talk about something else, but well, once my tail commenced to thumping, I (almost) totally forgot what I was going to say.

I had planned to tell you about freezing spinach, like four weeks ago. In fact, I had taken pictures of the whole process, but then I decided not to write about it after all. Another bunny must have run in front of my snuffling nose.

Thanks, Zoe, for getting me back on track.

How to Freeze Spinach

Wash the spinach, and lay it out on a bath towel to air dry. There is no need to get it totally dry; you are going to steam it, after all.

Steam the spinach. I do this by putting about an inch of water in my steamer, keeping the water below the level of the spinach because I don’t want to boil the spinach. I then stuff the steamer with as much spinach as possible. 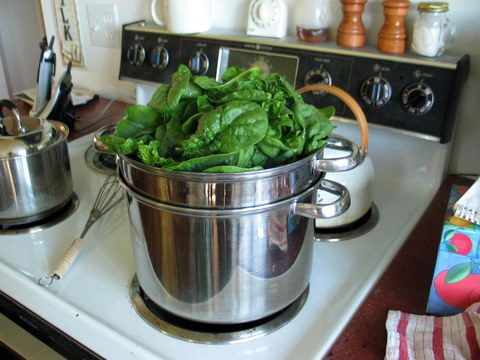 I clap the lid on the steamer and let it steam till the spinach is bright green and wilted (once in a while I gently toss the spinach with a pair of tongs so that it steams evenly). 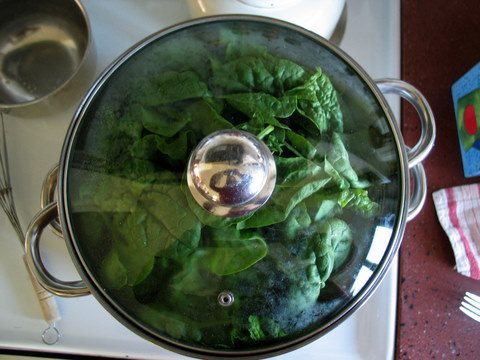 Transfer the spinach to a colander and allow to drip-drain.

Now, my mother taught me to lay the spinach out, piece by piece, on cookie sheets lined with plastic wrap, repeating the process till I had two or three layers of spinach, each layer separated with a sheet of plastic wrap, and up until this spring this was how I froze my spinach (although the last time I did this I made the mistake of using wax paper instead of plastic wrap and the spinach froze to the paper and I had a dreadful mess on my hands). 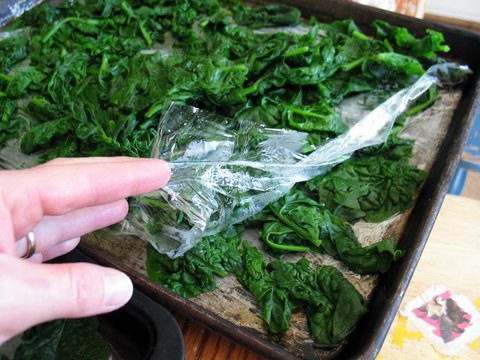 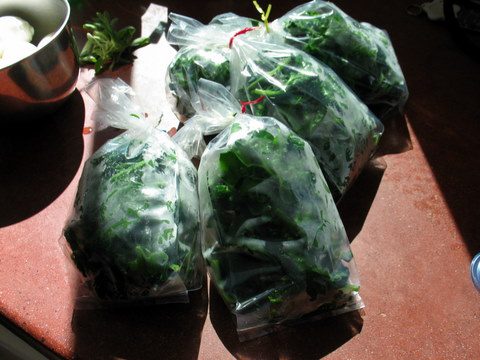 But then Mr. Handsome walked into the kitchen while I was painstakingly putting the individual leaves of spinach into bags and asked, “Why do you lay the spinach out like that? Why don’t you just stick it into a bag?” I didn’t know. So I called mom and asked her, and she didn’t know. So I called my girlfriend Amber and she said that she just freezes it in 10-ounce portions since that’s how it’s sold in the store and that’s the amount that most recipes call for. So now I do it Amber’s way. It’s easier and it takes up less freezer space, too.

I realize there’s more than once way to slice an onion, so … how do you freeze spinach?

(Click here to learn how I freeze Swiss chard.)