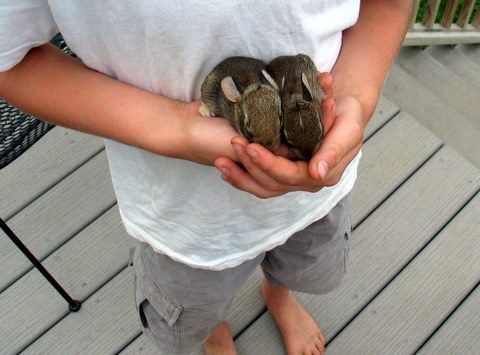 On Sunday afternoon the dog unearthed a rabbit nest, and then the kids gallantly saved two bunnies from a set of frothing canine jaws.

The word “saved” is ambiguous. Saved for what? To be butchered? To be fed to the dog? To die from starvation? Seeing as I don’t care much for rabbits, particularly the wild kind, I wasn’t too thrilled—whatever would we do when the bunnies grew into two adult garden-loving rabbits?—and I told them so. 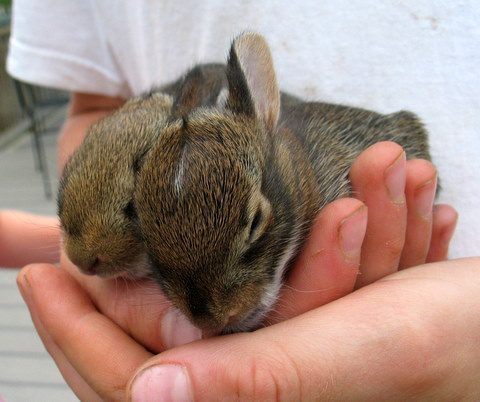 But then I remembered the hours of fun I had with my friend Amber back when we were little girls and turned part of her barn into an animal hospital and spent hours trying to feed and coddle their viciously wild barn cats. It was so much fun to (try to) take care of those little kittens, pretending that their survival depended on our hard work and loving care.

Fast forward twenty-five years and here I was, my delighted children clustered around me, their hands cupping two, real-life, side benefits of country living, looking at me expectantly, hopefully. (It didn’t escape me that I was being handed a free, hands-on educational experience, not that I was about to do any teaching).

“Go out to the barn and find a cage,” I said. The kids gasped with surprise (am I really that strict?) and then yipped with joy and tore off to round up all the things that two little bunnies could ever possibly need. 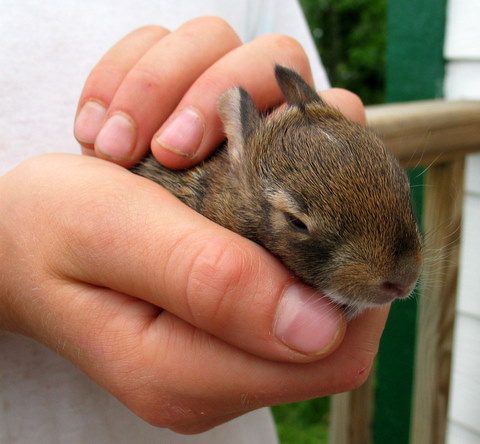 When Yo-Yo came in and asked me to look online to see what bunnies eat, but I pointed him to the world books instead, telling him to look it up himself. He yanked the thick blue book off the shelf and ran back outside where I could hear him reading out loud about grasses and climate and such. Later when they asked for milk to feed the bunnies, I did find a little medicine dropper for them and show them how to wiggle the tip in behind the rabbits’ clenched front chompers and gently squeeze the milk in, drop by drop, looking all the while for the occasional throat twitch that would indicate it was indeed swallowing. (Feeding the bunnies did tug on my heartstrings, just a little).

The children have been faithfully feeding the bunnies milk and slipping them bits of carrot and snap pea and cuddling them in all their free time, but then the inevitable happened: the littlest Bunny Foo-Foo died. “Are you sure?” I asked, going outside to investigate.

They lifted the bunny and hung it upside-down to show me how very dead it was. (Mr. Handsome thinks it had internal injuries—the dog, you know…)

“Okay, then, go throw it on the burn pile” (the burial ground for most of our dead, wild animals). They obeyed, no tears or drama whatsoever.

The remaining Bunny Foo-Foo appears to be thriving, jumping so high he bangs his head on the roof of his dog-carrier cage. The kids are determined to sell it for the bargain price of five dollars, but I told them I doubted they will have many buyers clamoring to snatch up their pet.

I’m not too worried about this potential problem yet, figuring I have plenty of time to let it work itself out before I will have to step in and make any decisions. I’ll let them nurse it back to health, raise it, and then, if it hasn’t taken a bite out of a child’s finger, died or escaped, we’ll deal with it then. They can play with their new pet as much as they like as long as they are gentle the the bunny, as long as they take turns holding it without fighting with each other (we’re not doing so well on that one), and as long as they washed their hands with soap after each visit to the bunny’s house, and as long as they keep it out of my house.

About one year ago: Work. (It looks like we won’t be getting any blueberries this year—our local blueberry farm closed their PYO option after being open for only two days. I’m sorely disappointed and am taking this misfortune as a sign that we need to get busy and plant ourselves some blueberry bushes.)