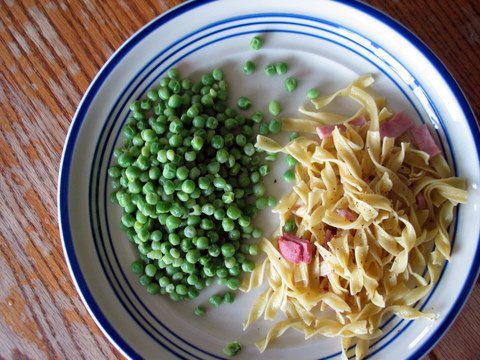 More often than not, the simplest food is the best. Quite a bit of what I eat falls into the category of simple fare, but I often neglect to tell you about it because I figure that you already know about it, enjoy it, and, like me, take it for granted.

Take peas for example. We eat them a lot. I like to serve them alongside macaroni and cheese or Indian chicken. They’re an easy vegetable to prepare and one that the children like, or at least eat with minimal complaining. If I’m throwing together a quick meal, or one that involves a vegetable side dish that the kids don’t like, I usually pull a bag of peas out of the freezer compartment, dump them in the kettle, add some water and salt, and bring them to a boil. It’s faster and less time-consuming than making carrot sticks.

That is, unless you grow your own peas. Then they are time-consuming beyond reason. The work that goes into growing your own peas (planting, weeding, picking, and shelling) transforms them from an every-day fast food veggie into a gourmet food on par with fresh mozzarella, sourdough bread, and homemade grape juice.

Miss Becca Boo and I (and The Baby Nickel, but he didn’t really help that much) picked peas the other morning and then that afternoon all four of the kids and I spent a couple hours perched on kitchen stools, bowls of peas nestled in our laps and empty pods strewn across the table. It was a nice time (we chatted and played the [boring] game “I’m Going On A Trip and I’m Taking…”), but shelling the peas was still a chore, one that involved hunched shoulders and sore fingertips. The reward for our labors seemed hardly worth it—not even a whole half-gallon of peas. How in the world do families raise enough peas to eat for an entire year? You’d be shelling peas for a whole week!

Because I figured there was no point in freezing the peas since we could eat them up in the next couple days, I simply blanched them and put them in the refrigerator. The next day I fixed half of them for supper, and my, were they delicious. I loosely followed Julia Child’s recipe for buttered peas, and I made brown butter noodles with ham to go along with them. Mmm, butter.

The kids thought the peas strange, claiming they liked the store-bought peas better, but they ate them anyway. (I took their complaints with a grain of salt since the stomach bug is worming its way through our family and the kids have been turning up their noses at even their favorite foods.) They fussed at the noodles and the ham (normally favorite foods) but when told that they could have one cookie for one helping of food and two cookies for two helpings, Yo-Yo and Miss Becca Boo ate generous second servings.

As for me, I could hardly keep my hands out of the noodle pot, and I had seconds and thirds of everything—I didn’t even need a cookie afterwards (though I did eat a part of one).

While I served the peas and noodles separately (kids, you know), they can be tossed together in one big serving bowl right before serving. That’s how I ate the leftovers. 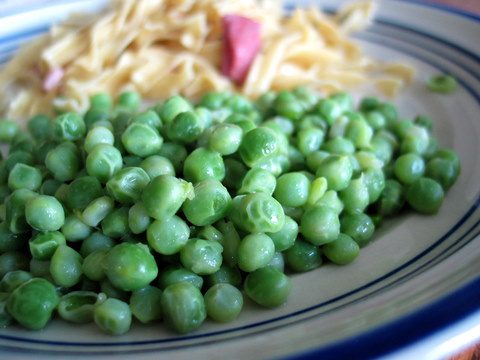 I admit it seems rather scandalous to add sugar to the already-sweet new peas, but however unnecessary, it does make them good!

Drain the peas, return them to the kettle, and turn the burner back to medium heat. Gently cook the peas, watching them closely, till all the moisture has evaporated. Add the sugar and more salt and pepper, if needed. Add the butter, toss the peas to coat, and serve. 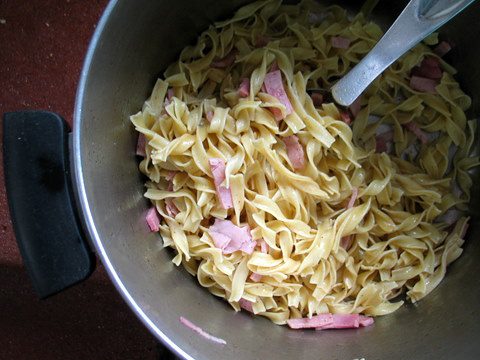 Chop the ham into little strips, about the same width and length as the noodles.

Cook the noodles according to the package directions, taking care not to over-cook them. Drain them and return them to the kettle.

While the noodles are cooking, brown the butter. Put the butter in a small saucepan and melt it over medium heat. Once melted, give the pan a swirl every minute or so, watching closely to make sure the butter doesn’t burn. When there are lots of little brown specks in the bottom of the pan, remove the pan from the heat and pour it over the noodles.

Add the sliced ham and toss to mix. Taste to check the seasonings. Transfer the noodles and ham to a serving bowl, and garnish with the parsley, if you like.