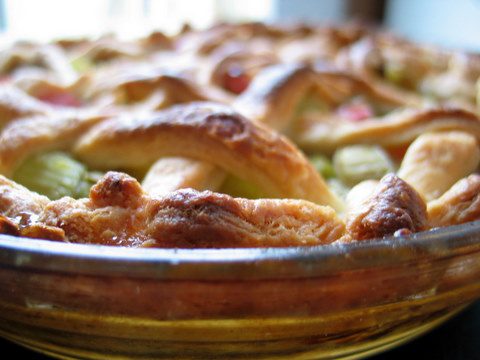 I’m cramming in the kitchen. I have so much to bake/cook/create and so little time. I know why I’m panicking, though. It’s because this is the last I’ll have any amount of time for creative cooking before the garden takes over and I’ll be hunched over a hot stove, slinging food into the freezer/canner at breakneck speed.

It makes no sense really. It seems like summer would be the best time to experiment with all sorts of new recipes: pestos from different herb combinations, unusual green bean dishes, exotic berry tarts, etc. But by the time the produce starts rolling in, I’m just scrambling to keep my head above water and have zero time to ponder and experiment.

Because for me, experimentation is a time-consuming affair. First, I read. I type an ingredient into Epicurious, or look it up in the back of a cookbook (Simply in Season is my go-to book for this kind of research), and then I browse through the recipes, looking for ones that we’ll like, that use up a lot of the specific ingredient (a half cup of fresh peas isn’t going to make a new recipe worthwhile when I have an abundance of peas), and that aren’t too complicated. I ponder and scribble notes and make plans, frittering away the minutes in a happy stupor, dreaming up a storm and cooking nothing.

Fact: dark winter evenings by the wood stove are great for this mulling and stewing—not busy-till-bedtime summer days.

All this to say, over the past couple dreary cold weeks I’ve been throwing a last hurrah, dreaming and experimenting, mostly with pies, breads, asparagus, and rhubarb. Just to give you a little feel for what that means: Saturday’s plans included not only working in the garden as much as possible and washing mountains of laundry, but I also hoped to make something nourishing that could be called supper, as well as an apricot-almond pastry, a rhubarb tart, a creamed asparagus soup, a newfangled (to me) French-tart crust, rhubarb punch, more rhubarb jam, and some more cream cheese pastry cookies. I’ll not going to tell you what did and didn’t get done, except to say that the dirty laundry is still dirty because it rained and it’s evidently supposed to rain for the next eternity so we’ll soon be walking around in just our birthday suits and there will be no more pictures of us on this here blog. (Giving you fair warning.)

I dream big, and I pop my own bubbles. Don’t you come after me with any pins, okay? 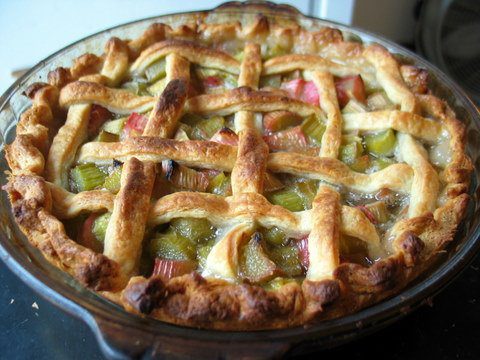 Mm. This is a good place to be.

This is a straightforward rhubarb pie, the classiest of the classy. It showcases the tart fruit (er, vegetable) which has undergone the simplest of preparations—chopped and then tossed with sugar, cornstarch, a pinch of salt, and some lemon zest.

The crust, a cream cheese pastry, is as important as the fruit, a delightfully rich, buttery affair—not the type of crust that gets left behind on the plate. 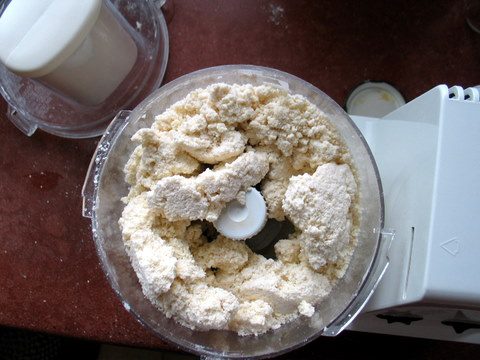 The rhubarb filling seems scant in contrast to the abundance of crust but it turns out perfect, in part because the crust is so good, but also because the fruit is so tangy-tart—the buttery crisp crust is a perfect foil for the sharp fruit. Whipped cream puts it over the top. 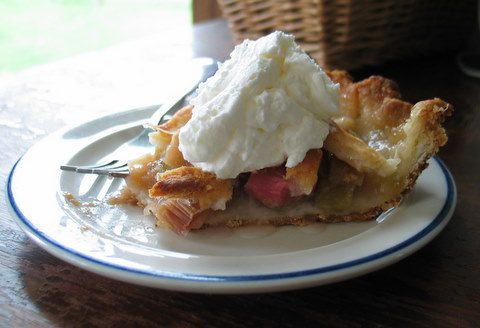 The pie is best served the day it is made—that’s when the crust is crispest—but the second day the fruit mellows and the crust softens, making the pie delicious in a whole new way.

I’m giving you the recipe for a nine-inch double crust because you will want pastry leftovers. I’ll tell you why later, but for now save any leftover scraps—simply press them together into a ball, flatten the ball into a disk, wrap the disk in plastic wrap, put the wrapped disk in a plastic bag, and put the bag in the freezer. Trust me.

Updated on March 16, 2011: do not blind-bake this pastry. It shrivels up and makes holes, like a piece of lace.

Chop up the butter and put it in the freezer about half an hour before making the pastry.

Using a food processor:
Measure in your flour, salt, and baking powder and give it a couple whirls. Add the cream cheese and pulse briefly (till crumbly). Add the frozen butter and pulse—again, till crumbly. Add the water and vinegar and process till the mixture starts to come together (this takes about thirty seconds in my processor).

Dump the mixture (it will still be quite sandy) onto the counter, knead briefly (just enough to pull it together—don’t overwork it) and then divide it into two parts, one being a bit larger than the other. Press each part into five-inch disks, more or less, wrap each one in plastic wrap, and set them in the refrigerator to chill for about an hour. (Or, you can double-wrap them and freeze them for several months.)

Using the hand method:
Measure the flour, salt, and baking powder into a mixing bowl and stir briefly. Add the cream cheese and use your fingers to mix it in. Add the butter and, working quickly since your hands are warm and you don’t want to soften the butter too much, work it in till you have a pebbly/sandy mixture. Knead in the water and vinegar. Shape into disks, wrap them in plastic, and refrigerate.

Toss together all the ingredients and macerate for about fifteen minutes.

To shape the crust and assemble the pie:
Place a baking stone on the bottom oven rack and preheat the oven to 425 degrees. This is one of the things I learned from Rose: placing the pie plate directly on the hot baking stone gives the pastry crust a crispy golden brown bottom and does wonders in eliminating the Soggy Pie Bottom Problem.

Remove the disks from the refrigerator and let them rest on the counter for about ten minutes. Unwrap the larger of the two disks, situate it in the middle of a piece of plastic wrap and place a fresh piece of plastic over top. Using a rolling pin, roll the pastry into a large circle, to about an eighth-inch thickness. This step requires a lot of elbow grease and much umphing and oofing, and maybe even a few gentle curses, but it will eventually do what you want it to. I often peel off the top piece of plastic, lay it back down, flip the whole thing over, loosen the bottom-now-top piece of plastic, lay it back down, and then roll from that side. When you’re ready to fit the crust into the pie plate, do the whole peely-flippy routine that I just described, except that instead of laying the bottom-now-top piece of plastic back on, you leave it off, slip your hand under the bottom plastic and invert the whole thing into the pie plate.

Have I totally lost you? Am I making any sense at all? Is anyone still even reading this???

Gently press the pastry into the pie plate, smoothing out the air bubbles. Peel the piece of plastic wrap away from the pastry (the one that was on the bottom but is now on the top, of course), and trim off the excess pastry.

Put the rhubarb in the pie shell.

Roll out the second crust into a rectangle. Cut it into long skinny strips. Weave the strips over the rhubarb. I’m not even going to try to explain how—just do it.

Bake the pie for about thirty minutes, or until the juices are bubbling thickly. (Mine never bubbled thickly thickly, so I increased the original four teaspoons of cornstarch to five teaspoons.) You may need to cover the edges of pie crust with some aluminum foil after the first fifteen minutes of baking—take a square of foil, cut a hole out of the center (the width of your pie top) and then bend the outside edges of the foil square so that they curl loosely down over the pie crust when arranged on top of the pie.