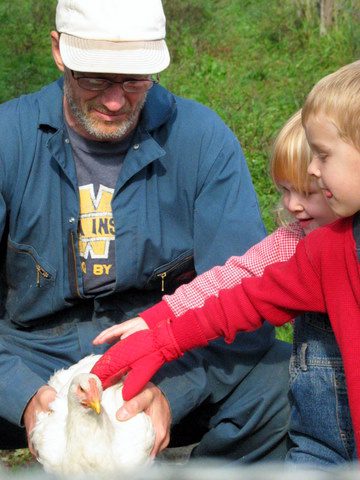 Heads-up: This is about butchering, so only read on if you don’t mind knowing how your chicken turns into fajitas and fingers (actually, I don’t know anything about that elaborate process) and crispy drumsticks. Also, I’m rather blunt
when it comes to terminology—no sugar-coating the dirty deed here. It is what it is.

I never said anything more about our chickens ever since I informed you that we got them, but that doesn’t mean they don’t exist. They first lived in the trailer-wagon house that Mr. Handsome rigged up for them because his chicken tractor wasn’t quite ready. A lot of them died while still in the trailer-wagon, which was to be expected since these chickens were the leftovers from the neighbor’s Big Chicken House Cleaning—they were not cream of the crop stock.

My kids, especially Miss Becca Boo, loved the chickies, checking on them all the time, feeding them, reporting on the new loses. One of their jobs was to remove the dead birds from the wagon until Mr. Handsome got home from work and was able to buried them. 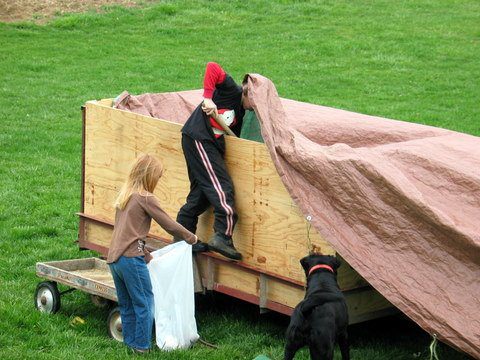 Don’t you just love how I made my kids do the dirty work? It’s proof that I’m a really smart mama. At least that’s my take on it. 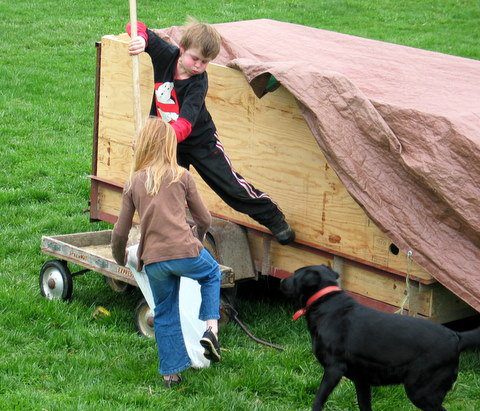 Note how Yo-Yo is breathing—through his mouth with his cheeks all puffed out. 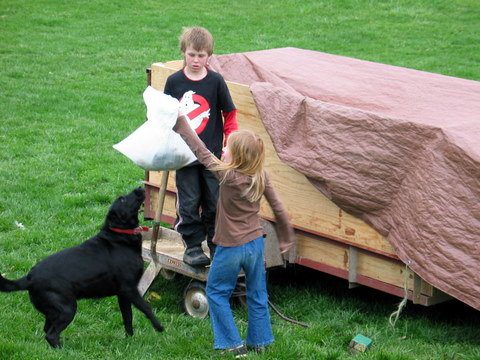 Even when we finally got the chickens into their spiffy new house, they still occasionally died. 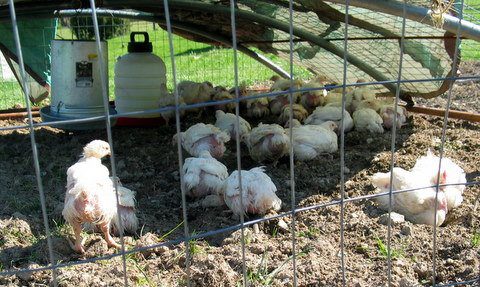 Mr. Handsome got really sick of burying birds; however, we may have a really good corn crop this year—the corn will grow tall and green … in splotches. 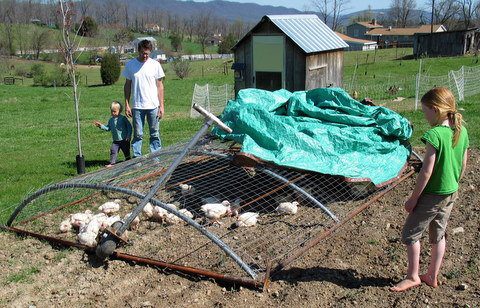 We’re down to thirty-three birds now. Actually, we’re down to thirty-two birds and one Dolly Parton. See, sometimes the chickens didn’t want to walk forward when Mr. Handsome moved the heavy chicken tractor, so they’d slip out under the temporarily-elevated bar. Once Mr. Handsome didn’t see one of the chickens and … oh dear, I don’t know if I should tell you this but… he set it down on the poor bird. SQUAWK! Of course he lifted it right up again as soon as he realized something was wrong, but the bird was changed for its short life—its one breast protrudes wa-ay forward. So now Mr. Handsome refers to the birds as “Dolly and Her Crew.” They cackle in harmony.

Dolly and Her Crew are going under the knife on Saturday. Our method is nice and simple. (Nice and simple for me, I should say, seeing as I don’t have anything to do with the knives and necks.) 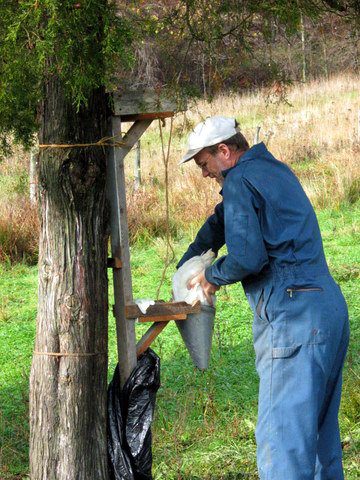 We use a killing cone and it’s really quite tidy—no headless chickens running around spritzing everything with sacrificial blood (and no, we do not believe in animal sacrifice—it’s just that I’m reading about the Hmongs right now and they do, so when I think of killing chickens I think of the Hmongs … but really, we’re very different—they sometimes butchered their chickens, or pigs!, inside their houses). That is, as long as they’re fully dead when you lower them into the kettle of hot water, but that’s another story.

We’ve butchered chickens two times before. We processed (oops, that’s a nice word) twelve the first time and about eighteen the second time. The second time around we all—my siblings, my Tiny-Little Brother’s friend, a foster kid, and my little sister Rose (through the Big Brother Big Sister agency)—congregated at my parents’ house for the day-long event. 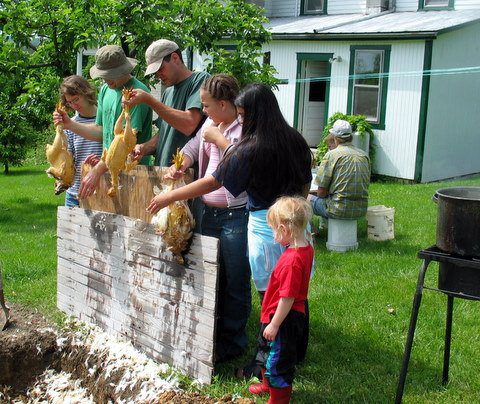 This time my brothers and my parents are congregating at our house, no extra helping hands and nearly twice as many chickens. It will be a long day. Except that now we’re really experienced and know exactly what we’re doing—nobody will be uncool enough to go accidentally plopping a still-alive chicken in scalding water. 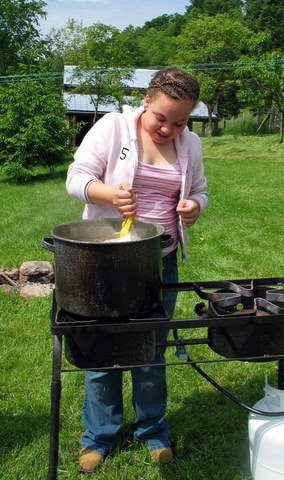 Not the actual hot-water-splashing event, but you get the idea.

Family Story: When my Tiny-Little Brother was really tiny and little, as in two-years-old, we butchered rabbits. He curiously watched as my father hung them up, cut their throats and skinned them, but then he innocently asked my dad, “Are you going to hang me up and make me dead, too?” My father sent him in to the house.

This is the same brother who will dissect and eat anything. Just a few years back he fried up a pan of locusts and munched away. (He even got Miss Becca Boo to eat one—we have it on video.) Moral of the story: If you allow your children to observe the butchering day goings-on, it won’t be long before they will be happily crunching on honey-dipped locusts.

When we’ve butchered, my kids mostly watched from a distance. 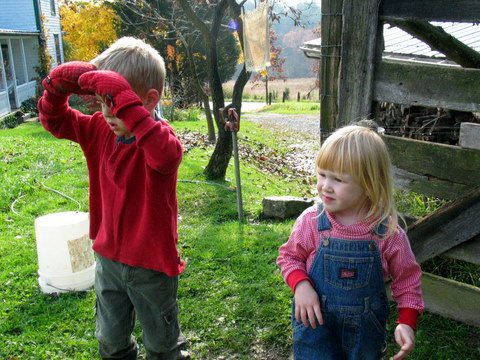 They weren’t crazy about the events, but they weren’t traumatized either. It’s just life. 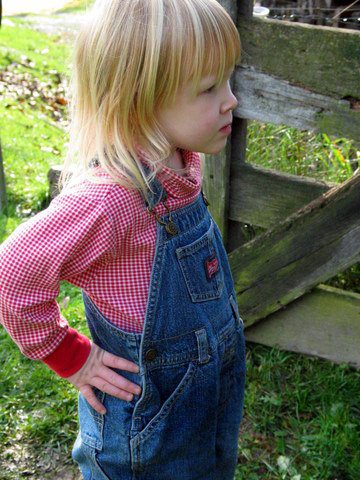 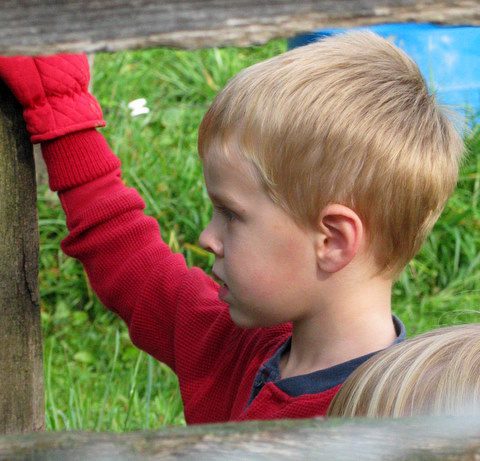 Some parts of life you wrinkle up your nose at but you do anyway, like cleaning the bathroom. Or eviscerating chickens. 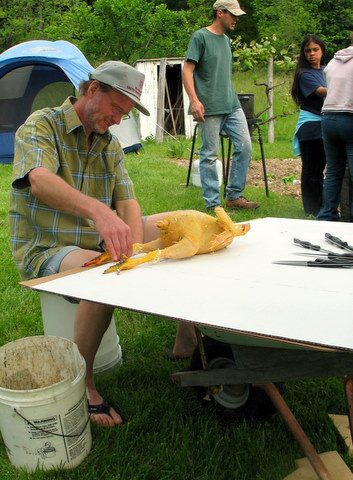 My father is a science teacher, so he’s good at that part. Maybe I’ll have Yo-Yo and Miss Becca Boo de-assemble and rebuild a dead chicken—homeschool science 101.

What will I be doing all the blood-letting day long? Feeding people, of course: we’ll be feasting on honey-baked chicken, egg salad sandwiches, and liver pâté with crackers. Just kidding! I’ll be sticking with a vegetarian dish of baked lentils and cheese because I do have my limits.

When nobody wants to eat anymore and I can’t invent any other pressing chores, I’ll be grimly plucking pin feathers and whining: This is sooo disgusting. I don’t know why we are doing it. The smell! The mess! Gross.

And I think it would be cool to raise hogs. Huh.

Ps. We’re not the only crazy chicken killing people around. For more stories look here and here.