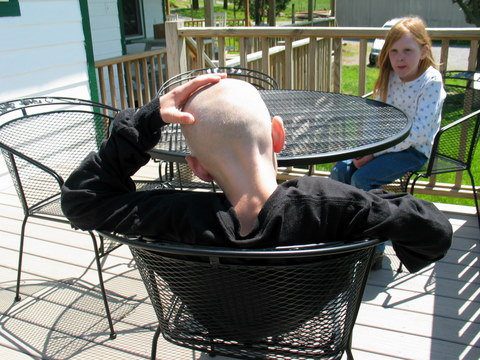 If you ever want to do something daring with your hair, something totally different, but are too timid, take a pair of scissors to your (a willing) child’s head. It’s almost just as good. It gives you a high to see your child with new locks—or not—and you feel brave and daring and like you’re living life on the edge. Is this why people become hairdressers, I wonder? Do they all get a little zip from leaving clumps of hair on the floor? Or maybe I only got the high because it was my own kid’s hair that was falling in satisfactory little heaps all over the tiled bathroom floor. 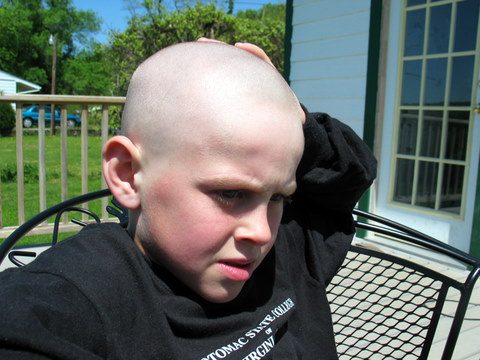 Miss Becca Boo was genuinely scandalized by Yo-Yo’s new look. “Everyone will laugh at you,” she warned, aghast that he would so casually endanger his place in society.

Yo-Yo just grinned and said, “No they won’t. They’ll make me head of the club. The person with the shortest hair is ruler.”

What? A short-haired club? Either I know nothing of my son’s social circles or he has a vivid imagination. I suspect the later. But hey, I love it that he’s bold enough to make his own fashion statements. He certainly didn’t inherit that trait from me.

Miss Becca Boo also pointed out that he was now a bald-headed baby like the two little boys in Because of Winn-Dixie, an elegant, simply-stated novel by Kate DiCamillo. I don’t think he looks anything at all like a baby with his skanky hair gone (thank goodness)—I think he looks more grown-up and sprightly, like a gnome. Maybe it’s just my mother’s eyes… 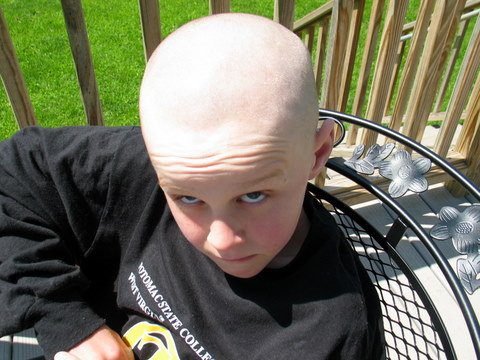 Yo-Yo’s hair came off in stages over a twenty-four hour period. First we buzzed it, and then the next day he tried shaving lines into it. Then I buzzed it lower. And lower. He wants it totally bald, but I’d have to use a razor and I’m scared I’ll cut him. I told that to Mr. Handsome. His nonchalant response? “It will heal.”

We’ll see … maybe if Yo-Yo begs. We’ve come this far; might as well go all the way.