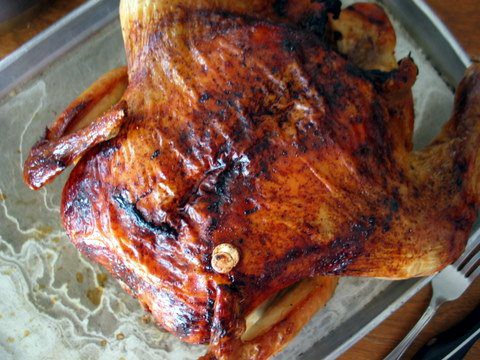 “Mama! Who killed that chicken?!”

Sweetsie had spied the pasty-white bird, stripped of its Perdue wrapper and lounging lazily in the roasting pan, sitting atop the kitchen counter.

Wow. If that doesn’t make you feel like Mother Earth incarnate, I don’t know what will: your five-year-old sees dead poultry and wonders who done did the killin’. Wow. We are some down-home folks, for sure.

She didn’t notice the pop-up timer thingy, obviously, but if she had, she probably would’ve thought it was some odd body part, like a knuckle bone protruding from the chicken’s pudgy white breast.

I find Sweetsie’s matter-of-fact observation of our dinner’s main course both funny and encouraging: it was alive; it is now dead; someone made that happen; who? My children may be only marginally acquainted with McDonald’s nuggets, but they know that in order for them to eat chicken, someone has to do the butchering, and even without a television to teach them the ins and outs of their universe, they have had their share of real life ups and downs, otherwise known as “science lessons.” We’ve butchered our own chickens (though the PC terminology has now replaced “butchered” with “harvested”), purchased our beef from our neighbors’ (passing their house on our way into town: That’s our hamburger standing there. Hey! It’s EATING that green hose! Well, um, I guess if you bite into a piece of rubber when you’re eating your meatballs at least you’ll know what it is…), shoveled rotted chicken matter (picking out the chicken bones to feed to an uninterested Francie) onto the garden’s plants, disposed of sick and turned-mean animals, witnessed puppy births, witnessed a human birth (only Miss Becca Boo), fed dead pet fishies to the chickens, guarded (and destroyed and built) robins’ nests, endured pet bites and scratches, cried over and buried a dead puppy, gutted and dissected a squirrel, tasted fried locust, helped cut up a deer killed, er, harvested by their grandaddy, and swatted flies and smooshed potato bugs. As a result, my children are nonplused when they see a dead chicken sitting on the kitchen counter.

I take that back—when Miss Becca Boo and Yo-Yo saw the chicken, they yelled and squealed and jumped up and down for joy. They love chicken. 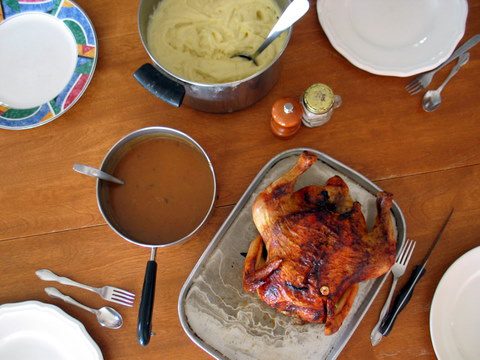 I shooed the thrilled kids out of the kitchen and went about preparing the bird, slipping some pieces of fried bacon into the chicken’s cavity, pouring the bacon grease mixed with brandy over the top, and then slipping the chicken into the oven to roast.

The chicken took longer to roast than I had anticipated, so the kids were plenty hungry when I called for dinner. After they ate their obligatory serving of peas and mashed potatoes and gravy, they had seconds of chicken, and thirds, and fourths, and fifths. In exasperation, I moved the chicken out to the kitchen, but they followed, sticking their hands into the cavity, pulling off the succulent morsels, searching for the wishbone, even crunching into the bones to see what they tasted like. 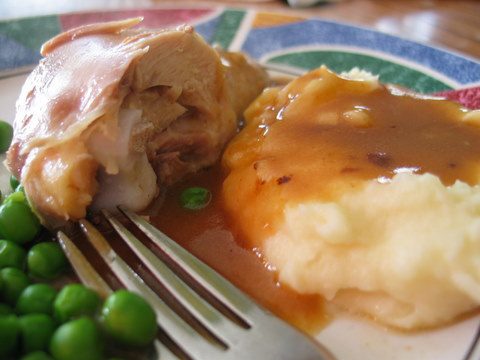 We’re easily impressed, that’s for certain. And we like our chicken.

The bacon and brandy flavor the chicken in a mild and unobtrusive way, but as Nigella says, “It’s still what it is.” Meaning, it’s still just roast chicken. But! The drippings make the most fantastic gravy, so don’t make the mistake of overlooking them.

one dead chicken
2-4 pieces of bacon, cooked
1/4 cup of bacon grease, or whatever you get when you fry the bacon
1/4 cup brandy (I used triple sec)
the neck and giblets, reserved for the gravy
½ cup flour, approximately
salt and pepper

For the gravy:
Put the neck and giblets in a saucepan, cover them with about a quart of water, bring the water to a boil and then simmer for a couple hours, till the water has reduced by half. Remove the giblets and neck and either save them to add to the soup pot for broth, feed them to the animals, or pick the meat off the bones and cut it up to add to the gravy—you choose.

Put a cup of water in a pint jar, add the flour, screw the lid on tight and shake vigorously for thirty seconds. Pour the flour water through a strainer into the saucepan of hot, giblet-less water. Put the saucepan back on the heat and whisk continuously till it has thickened. Set it aside until the chicken is done, at which point you add the pan’s drippings to the gravy and stir some more. Season with salt and pepper, heat through, and serve.

Yield: at least a quart of gravy, maybe even a couple cups more.

For the chicken:
Put the chicken in a roasting pan, breast-side up. Rub salt and pepper over the chicken and put the cooked bacon in the chicken’s cavity. Mix together the bacon grease and brandy in a little saucepan, heat through, and pour over the chicken. Bake at 350 degrees till tender (or until the little pop-up do-hickey pops up). Transfer the chicken to a serving platter (scrape the rich drippings into the gravy), and serve.

Broth:
Collect all the bones and uneaten chicken parts, cover with a couple gallons of water, and simmer for 6-12 hours. Cool, strain, and freeze the resulting broth.