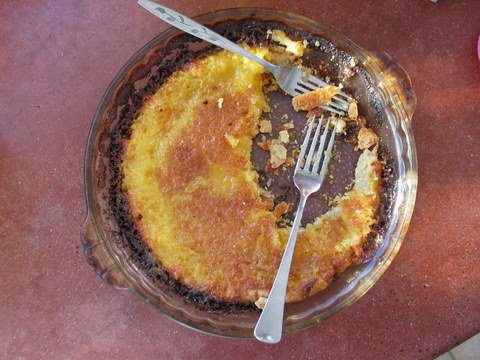 I gotta show you this lemon tart I made today.

I totally bombed it, appearance-wise. The tart crust I used (not the recommended recipe because I was feeling ever so slightly petulant) slouched down to the bottom edges of the pan, like a cool-dude teenager’s baggy, low-riding, boxer-showing jeans. I decided to just dump the filling on top of the crust anyhow, and of course it boiled over and down just as I expected it would, and the edges burned some, but aside from that, it passed our taste-tests with flying colors. Yo-Yo Boy said that maybe he would ask for a bunch of lemon tarts for his birthday cake. And his pants are still firmly anchored above his hips.

The recipe comes from Deb over at Smitten Kitchen. I’m in love with her blog! I can’t believe I’ve been web-literate (not to be confused with web-fluent) for this many months and just now found it. She’s in the same boat, or at least in the same cove, as Orangette, and that is some pretty high praise, coming from me, a smitten Orangette fan.

Anyways, this is an amazing recipe, not just because of the flavor and the simplicity, but because the recipe calls for blending up an entire lemon, minus the seeds, in a food processor with some sugar. The resulting bits of chewy, candy-like lemon rind stud the creamy tart, and pack a punch flavor-wise. Is that not totally fantastic? Like, wassup, dude, this is some cool piece of sweet! 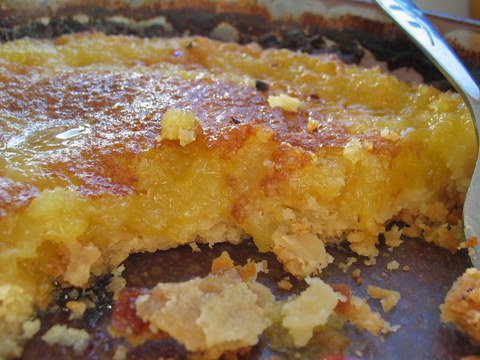 Obviously, it doesn’t take much to make my day. Just give me a lemon and a food processor and all signs of pubescent petulance vaporize, poof.

Lemon Tart
From The Smitten Kitchen, and she, in turn, got it from Dorie Greenspan.

For the crust:
Use the recipe that Deb recommends (I’ll be trying it next time around), or your favorite tart crust, or even an everyday pie crust. Or, skip the crust all together and pour the lemon custard into little ramekins, set the ramekins in a pan of hot water, and bake them as you would a custard, till brown on top and the middle no longer jiggles (though keep in mind that after you eat the little non-middle-jiggling custard, your middle will be jigglin’). 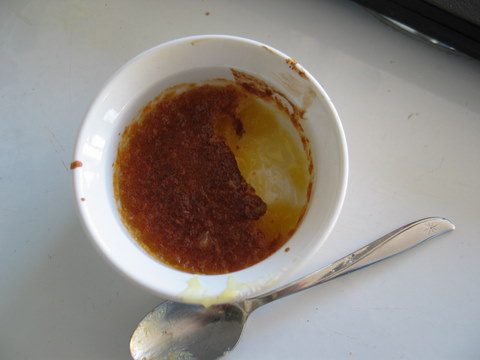 I just tasted the little ramekin of lemon filling (I had a some leftover after pouring the majority of the filling into my slouching-crust bottom) and it kind of divided as it baked, with the top and edges turning extra chewy with bits of crystallized sugar, and the bottom staying mostly creamy-smooth. So on second thought, though it would probably be quite tasty with a scoop of vanilla ice cream or some whipped cream, my preference is for a tart with a bottom crust, even a slovenly one.

Partially pre-bake the tart crust. (I took that bit of instruction to mean that I was to bake the crust till it was set and turning brown on the bottom, and since that part turned out fine, I think I was correct in how I took that to mean. Are you still with me?)

For the filling:
Wash and dry a lemon, slice it thinly, and remove the seeds. Place the sliced lemon in your food processor along with 1 ½ cups sugar. Pulse until well blended, sandy in some places and creamy in others. (I licked some of the lemony sugar off my thumb, and it crossed my mind that this would be a fabulous mixture to have on hand come summer for stirring into sweaty, tall glasses of iced tea.)

In a separate bowl, whisk together an egg, another egg yolk, 1 ½ tablespoons of cornstarch, the lemon-sugar, and a stick of butter that has been melted and then cooled.

Pour the lemon filling into the tart crust and bake at 325 degrees for 20 minutes, and then increase the temperature to 350 degrees and bake for another 15 to 20 minutes. Cool to room temperature and serve.