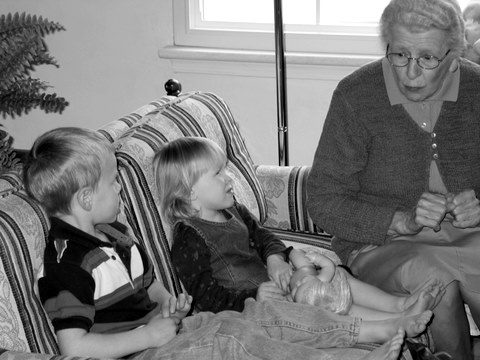 Not only did Grandma Baer, my mother’s mother, tell engrossing stories (here she regales Yo-Yo and Miss Becca Boo with some old-timey tale—probably the one about Johnny, the little boy who refused to eat his milk and bread),

she also made fabulous caramel popcorn. Each October she would make several batches of the popcorn, divide it up into small zip-lock bags, and hand it out to the trick-or-treaters that ventured down her driveway that wound through the woods and separated her ranch house from the road. 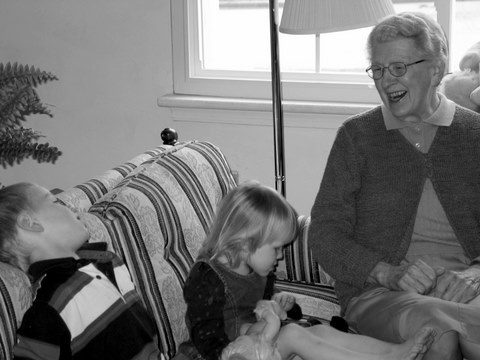 Even though my plain Mennonite grandmother handed out sweets to her disguised neighbor children, my own mother didn’t let me or my brothers celebrate Halloween. We weren’t allowed to go trick-or-treating, and more often then not we didn’t even hand out treats. One year we did hand out apples, and when one little neighbor girl reported back to me that her mother made her throw out the apple we gave them because it might have contained a razor, my mother was miffed. What good was a holiday that made people distrustful of others? (That was the same neighbor girl who ate a raw egg for twenty-five cents, on a dare that my mother gave her, an incident not at all connected with the imagined razor event—my mother is not a vengeful woman.) Instead, come the hallowed eve, we hunkered down in our dimly lit house, porch lights off, doing our best to give the impression that we weren’t home. Or we’d go visit friends. 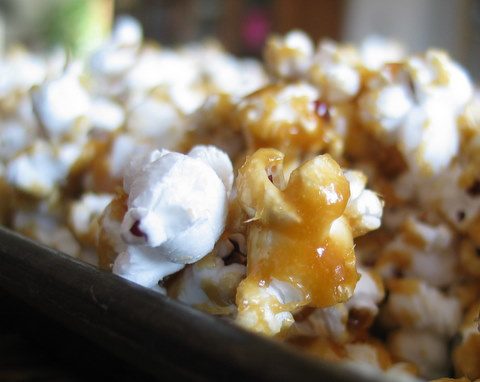 However, despite my mother’s abhorrence of the holiday, one year she did permit us to go trick-or-treating, but just to Grandma and Grandpa’s house. I have a vague memory of my brothers and I standing on the concrete stoop outside Grandma’s front door, our only costume the brown paper bags (with cutout holes for our eyes and mouths) jammed down over our heads. When Grandpa opened the door, Grandma declared heartily, “Well, well! What have we here!” We scampered past them into the foyer where we traded our brown bag heads for the role of popcorn dispenser, shyly handing the bags of popcorn to the witches and princesses that rang their doorbell.

Grandma continued her popcorn giving tradition even after Grandpa died and she had moved into a condominium. She collected pretty tins from the thrift store where she volunteered, and at Christmastime she filled the tins with her popcorn and handed them out to all the family—the singles and college students received the smaller tins and the families received the larger tins.

Sometimes my mother, aunts, and I got a bit possessive over the tins, trying to lay claim to the prettiest ones. The last year Grandma handed out the popcorn, I received this tin (or did I filch it from someone else?), and though my aunt tried, she couldn’t convince me to relinquish it. Now it sits atop the hutch, holding my sparse collection of sewing tools. 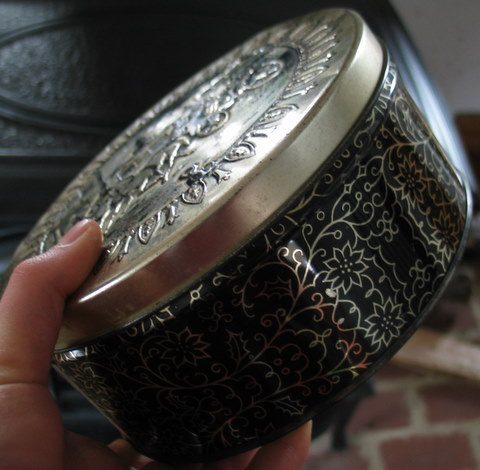 The first Christmas after our wedding, Mr. Handsome and I followed Grandma’s example and made numerous batches of caramel popcorn for hostess gifts. We bought several of the huge Christmas tins from Wal-mart, the kind that comes filled with three different kinds of chemical-laced popcorn—cheese, caramel, and plain—dumped their contents in the trash, washed the tins, and then refilled them with our own caramel popcorn. Even though it was a labor intensive gift, it provided many sweet snitching opportunities along with the mountains of sticky kettles and pans, so we didn’t fuss too much. 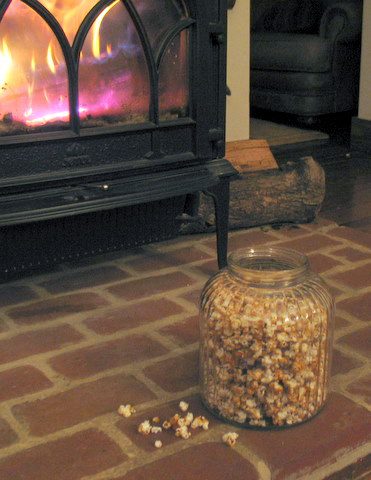 It is a cold and blustery Sunday afternoon and the children, cheeks aflame and noses streaming, are coming back inside after helping Mr. Handsome clean up the back field. While they were outside, I had munched through multiple bowls of the popcorn and finally, in an effort to maintain some semblance of self-control, had divvied out the last of the popcorn into bowls, reserving it for the children. Now, when the kids spy the bowls, they squeal with delight, snatch them up, and head straight for the fireplace, shucking coats and boots as they go.

“Can we have more after we finish this?” they ask.

“What happened to it?” they persist.

“Um, I ate it.” I smile pleasantly in an attempt to convince them that I had every right to eat more than my share (cooks privileges, you know). They heave grumbly sighs in my general direction, but their mouths are too pleasantly full to do any serious complaining.

As they finish, they bring their bowls back to the kitchen to deposit on the counter. I’m hunched at the computer typing all this up when Yo-Yo’s friend bluntly says, “Too bad you ate it all.”

I pretend to ignore him, but I think to myself, Yep, too bad, Sonny Boy. I want more, too.

Apparently, it doesn’t matter how little or how much of this popcorn you were able to consume—it always appears to be a nasty trick when this sweet treat is all gone.

Recipe update, November 16, 2011: for extra delicious popcorn, decrease the amount of popcorn from 6 quarts to 5, and increase the butter by 2 tablespoons. Wow.

Place the popcorn in a large mixing bowl and sprinkle the nuts (if using) on top. Do not stir. (The nuts have a better chance of getting coated with the caramel if you start out with them on top.) 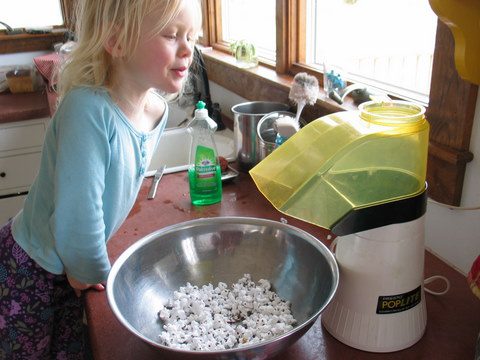 Put the butter, brown sugar, corn syrup, and baking soda in a heavy-bottomed saucepan. Bring the mixture to a boil, stirring constantly, and then lower the heat until the mixture stays at a steady boil (more than a simmer, less than a rolling boil). Continue to stir constantly. 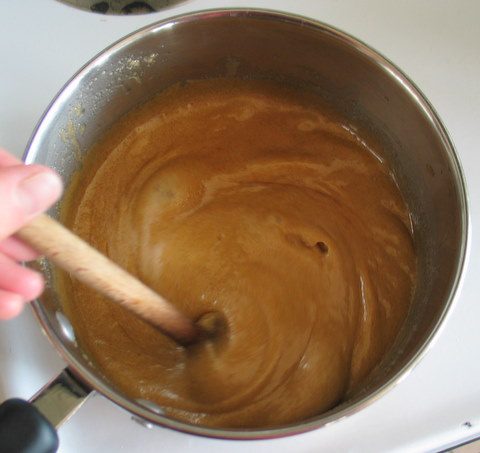 After five minutes of a steady gentle boil, remove the caramel from the heat, add the salt and vanilla, and stir well. Working quickly, drizzle the caramel over the popcorn, 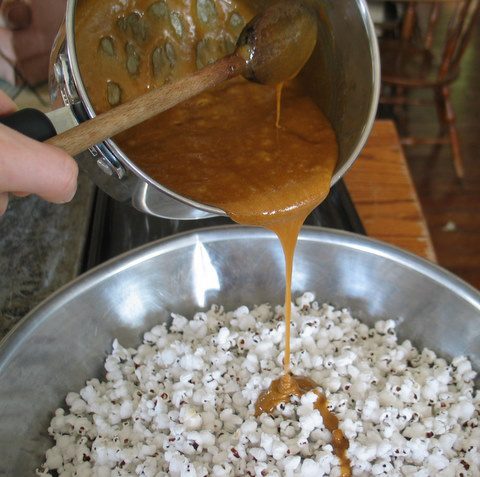 tossing to coat as much popcorn as possible. 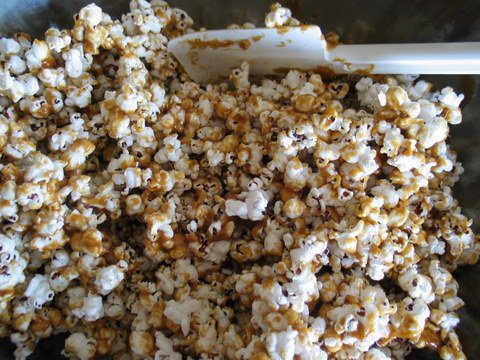 Divide the popcorn between two large, greased cookie sheets or glass 9 x 13 pans (one of my cookie sheets was too thin, so I tragically scorched half of the popcorn—next time I’ll be using the glass pans), and then hand over the sticky-bottomed mixing bowl and spoon to any children you may have hovering nearby. 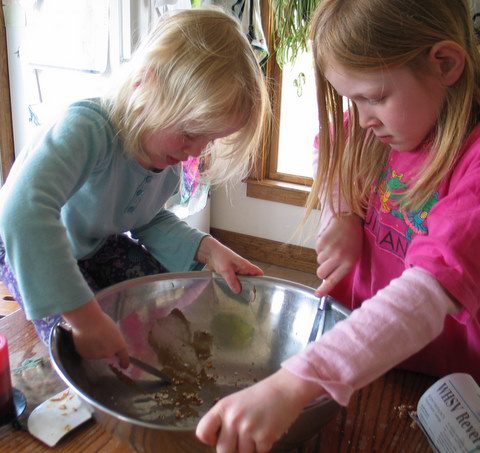 Bake the pans of caramel popcorn at 250 degrees for one hour, stirring every fifteen minutes. Cool completely before storing in an airtight container. 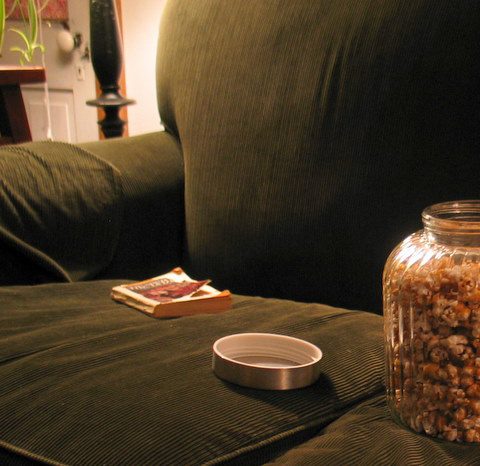