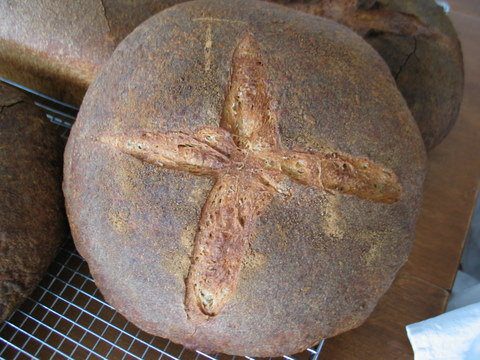 I have written hardly anything about sourdough lately. I’m afraid you’ll take that to mean that I haven’t been doing any baking, which is not the case at all. Not only have I been baking, I have also been experimenting with my own recipes, reading up on the chemistry behind the sourdough, dreaming about having a masonry oven, and teaching others (albeit just one other, but that number should change to two after this coming week) how to make the bread.

After three years of off-and-on baking, I’m starting to get into a more moderate baking rhythm. I get my starter out of the fridge, feed it for a couple days (if it’s been in the fridge for just a couple weeks, it only takes one day to wake up), increase the amount of starter, do a several days of big bakings, and then put the starter back in the fridge for another couple weeks.

I’ve experimented with enough recipes that I know what my family likes best, so I’m more efficient, no longer spending large amounts of time trying out new recipes (though I think it’s because of the wide-range of recipes that I’ve made that I’m finally becoming more comfortable with sourdoughs). 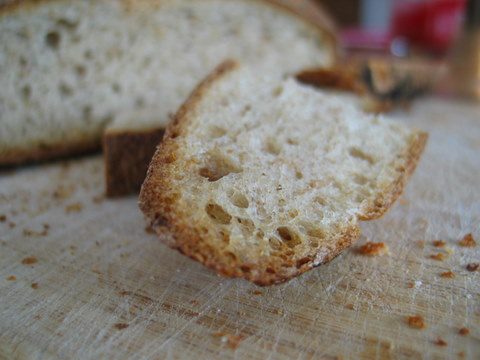 I have done away with the whole wheat starter, not because we don’t like it, but because I think there should be a way to make a nutty whole wheat bread using the white starter, a bread that rises better and tastes a little less sour. Which leads me to my first experiment. One morning, just a couple weeks back, I increased the amount of starter that I reserve each morning (I normally keep back a half-cup which provides enough, after a full day of feedings, to make a batch of Country White, with a little starter left over) to one full cup, putting it in a gallon jar to give it adequate room to grow.

I gave the starter it’s accustomed third and final feeding right around suppertime, but then at bedtime I shook things up a bit. I poured out some of the starter into a quart jar and fed it again, a fourth time, but this time with whole grains and freshly ground flour. My hope was that the whole grains would absorb enough of the water that they would soften to provide a chewy, nutty texture to the final product. Likewise, I wanted the ground flour to have some time to ferment and sour, giving the bread a deeper, more complex flavor.

The following morning I scraped the whole-grain starter into the mixing bowl, and proceeded with the recipe for Country White. I substitute some whole grain flours to the bread in place of the white flour, but because I didn’t want to make too many changes at one time, the modifications were minimal.

The resulting bread is a whole wheat version of the Country White, just what I was hoping for, proving that I can indeed make a good whole wheat without a whole wheat starter and by following the standard recipe. Granted, the changes that I made were moderate ones, and I suspect that if I were to make substantial changes I would need to make other changes as well, such as upping the water or decreasing the salt, but for minor changes this method worked well, the key being to add some of the whole grains to the starter the night prior to mixing up the dough. 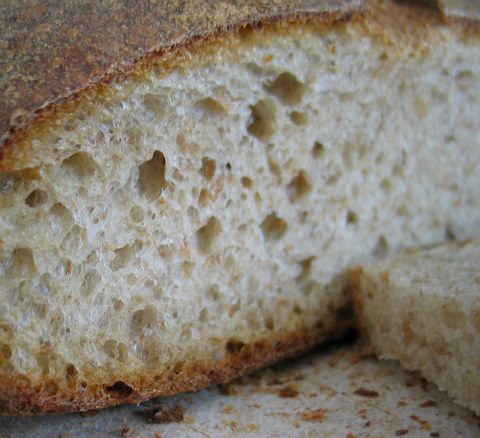 I have written down my changes into a recipe format, just for the sake of clarity and good record-keeping. Bear in mind that there is nothing magical about the grains I used. It’s the method that is important (though flexible) as well as the proportions of flour-water-starter. Once you understand those concepts, the sky is the limit.

Day One
Several hours after the starter’s final daily feeding (in other words, right before you go to bed), measure out 6 ounces of white starter and put it in a quart jar. Add 2 ounces rye flour, 1 ounce rye flakes, and 3 ounces water. Stir well, cover lightly, and go to bed (both you and the baby).

Day Two
Mix up the dough as per the instructions for Country White. The proportions are as follows: