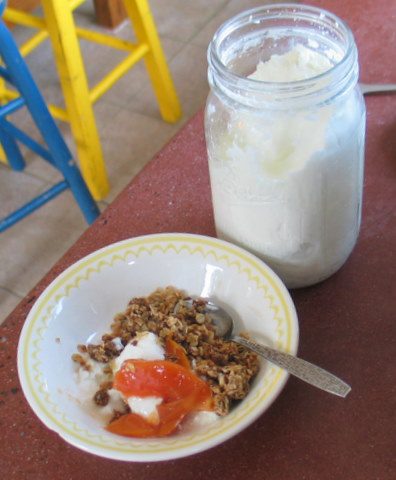 Just last week I noticed that my food dehydrator has a setting for “Living Foods”. Huh, I thunk to me-self. What could that be? Crickets? It wasn’t until a few more minutes of absent-minded puzzling that it hit me: Yogurt! By gum, that setting is for yogurt!

I never said I was the smartest babe in the woods.

I first experimented with one quart jar of prepared warm milk. It set up into a lovely yogurt in only three hours. The second time I made yogurt, I doubled the amount (two quart jars, not a half-gallon jar), and once again it worked like a charm.

Do you realize what this means, people? It means that I can make at least four, maybe six, quarts of yogurt in only about four hours! All this time I have been putzing along, turning out a single quart of yogurt at a time, sometimes making as many as four different batches in a week.

My life has been simplified and it only took me a year to figure that out. 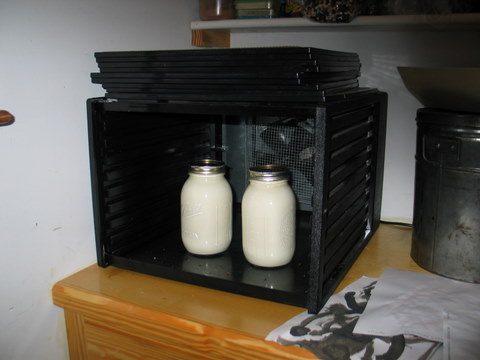 The dehydrator functions in two ways: it uses electricity to raise the compartment’s temperature, and it has a fan that blows around the hot air, helping to dry out the food. Even though the fan is blowing while I’m incubating the yogurt, it is not drying out the yogurt because the jars are tightly lidded. It is the hot air part of the dehydrator that is at work, slowly “cooking” the yogurt. Does that make better sense?

And by the way, I think I could easily fit eight quart jars in the dehydrator, and maybe even use half-gallon jars, too. It’s a fabulous machine.