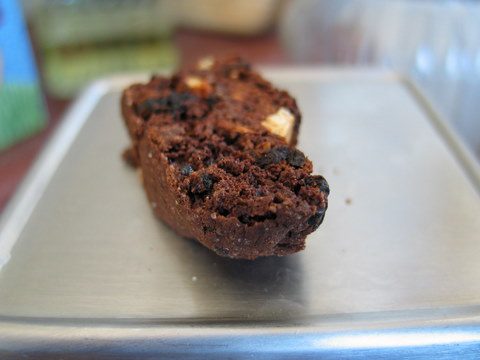 I think I might as well face the facts: I don’t like chocolate biscotti. I always thought I just hadn’t yet found a good recipe, but a couple weeks ago I made what should be, and I think is, a fine chocolate biscotti and I just don’t care for it.

Which would make sense, I suppose, if I stopped to think about it for a minute. I’m not one for certain types of other chocolate baked goods such as chocolate graham crackers, cocoa puffs (can that even be counted as a “baked good”?), chocolate donuts (are they supposed to be so dry?), and chocolate cookies, so this failure of mine to adore chocolate biscotti does fit into the big picture.

I was quite excited when I found this chocolate biscotti recipe in Cooking Light Magazine (November 2008). The recipe called for grinding up some bittersweet chocolate with sugar, adding some cocoa powder and some instant espresso granules, toasted hazelnuts (I used almonds), and dried sour cherries that first got a leisurely soaking in some warmed-up red wine. I also threw in some mini-chocolate chips. 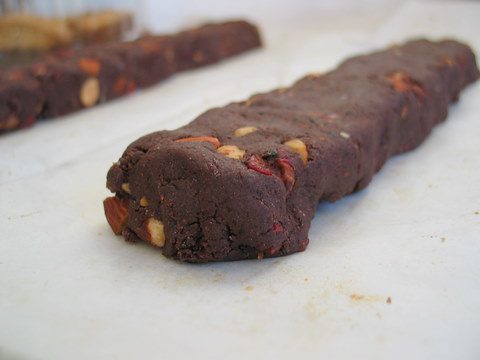 The result was … dark. There really is no better word to describe them. Daaaark. Or maybe, “Dah-k, dah-lin’.” Actually, it’s more like a gravely growl: “Sexy and, grrrr, darrrk,” Then again, it could be a simple exclamation: DarK! 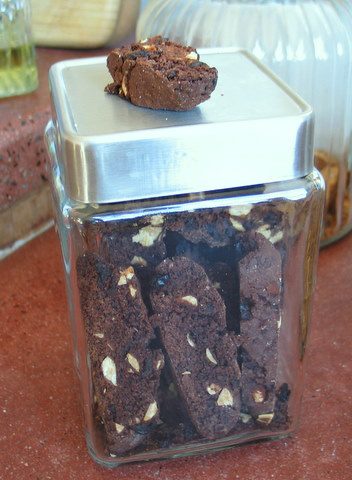 You would think they would be a dark chocolate lover’s dream come true, and I am a lover of dark chocolate, but they just didn’t cut it for me. And then it occurred to me: could it be that this was my problem? Maybe I wasn’t woman enough. Maybe I was an unsophisticated, bumpkinly, naive eater-of-chocolate. No! This couldn’t be so! My anxiety levels rose. Every time I glanced in their general direction, the darkly brooking, tall biscotti stared back at me as they postured cooly, lounging against the sides of their boxy glass jar. I ducked my head in shame and looked the other way towards lemon and pumpkin, less intimidating creatures.

Until yesterday. Yesterday I dished myself a scoop of leftover (stale) homemade vanilla ice cream and crumbled a piece of biscotti over top. I tasted, and—Oh my. Dark crunch met cool smooth and promptly became bosom buddies. I had seconds.

While I’m still a bit awkward in the presence of this biscotti, all is not lost. In other words, I won’t feed the sexy fellows to the chickens, but at the same time I don’t think I should be solely responsible for eating the remaining dozen or so pieces of biscotti, plus the vanilla ice cream that is required to wash them down. So if you would like some, I will give them to you. 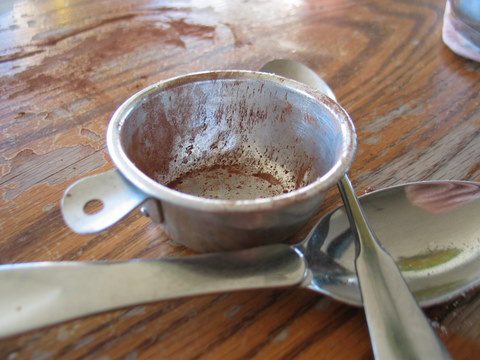 And if you want the recipe I’ll give that to you, too. Or maybe you have a chocolate biscotti recipe that you think just might win me over? I’d be delighted to try it.