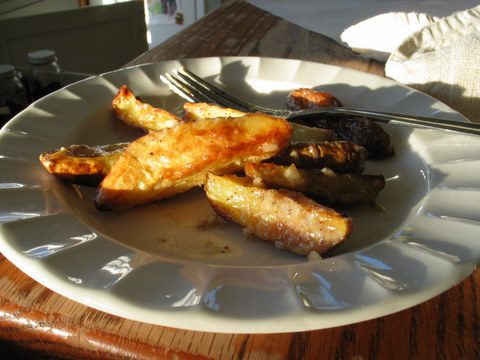 I need to get this off my (flat) chest before I go to church tomorrow. It’s a recipe for potatoes that is so incredibly delicious it’s a crime for me to keep it to myself. If I were Catholic I would have already gone to confession and said multiple Hail Mary’s for the sin of Extensive Recipe Withholding.

I told my mother, the queen of potato gluttons, about the recipe and after waiting all week for me to post about it, she finally called me up on the phone yesterday, demanding I give it to her immediately. But then she ended up not making it that night after all because my father took her out to see Frost Nixon and they ate cereal at home before going out and then they ate McDonalds’s on the way home, and while the movie was good, I know she would’ve like these potatoes better. She’ll get to them, though, so I’m not worried. 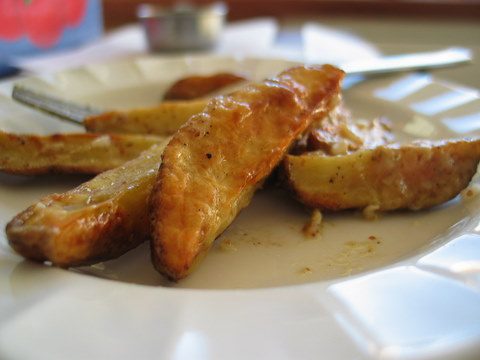 But I am kind of worried about the rest of you. I know everyone has their own set of likes and dislikes and no one should be bullied into eating a certain dish, and it’s not a good idea to bully people in general, but I don’t think it’s too great a sin to cajole someone into please, pretty please, trying something new. It’s not like I’m sitting across from you at the dinning room table, fork in clenched fist, trying to jam a wedge of potato down your throat. For crying out loud, I’m on the other side of your computer screen and you can shut me down anytime you like.

So that’s why I’m kind of worried. You might click away before you even read this whole post. Or you might read it and then decide not to try the recipe. Which would really be quite dreadfully sad considering it is such a good recipe and all.

Do you want to know how good it is? Do you need proof? Yes? Then read on. (If you’re already sold, you can skip the following six paragraphs and cut straight to the recipe.) 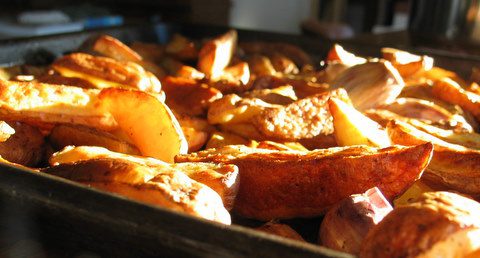 Late last Saturday afternoon after I finished tossing the potatoes in their garlicky dressing, I speared one potato wedge with a fork, slipped on my Crocks, and ran out to the barn where Mr. Handsome was working on an ongoing project called Bringing Order Out of Chaos. I brandished the fork in his face and said, “Try this.” He opened his mouth obediently and started chewing. And then he said “Wow.”

Folks, first of all, Mr. Handsome does not say “wow” about food. He just doesn’t. Second, he hates it when I wave speared food in his face—hates it, hates it, hates it—and as a result, he has made it his custom to act as nonplused as possible after chewing said food because he doesn’t want to encourage the forced taste-testing episodes.

But get this, not only did he say “wow”, he also smiled (and he does not make a practice of smiling just for the heck of it), and then, as though that weren’t enough, he asked me what was in the sauce. He was genuinely interested!

I flew back inside to my kitchen nest, happy as a jay bird, and devoured a couple plates of the potatoes myself. Sweetsie ate a bowlful, and Miss Becca Boo and her friend shared a bowl of the potatoes, and then another one or maybe three. (The boys weren’t home, so I can’t say yet if it has the family’s unanimous seal of approval.) 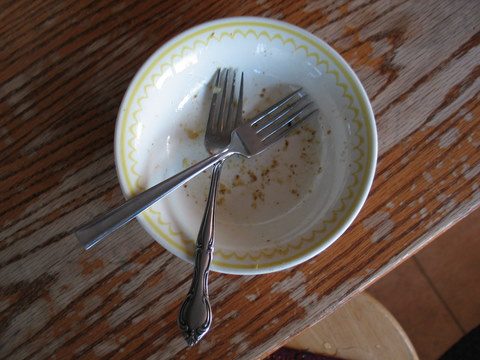 When Mr. Handsome finally came inside, he had so many helpings that he finally quit dishing the potatoes onto his plate and just started eating directly out of the serving dish, a flowered, blue ceramic bowl that we got for our wedding. 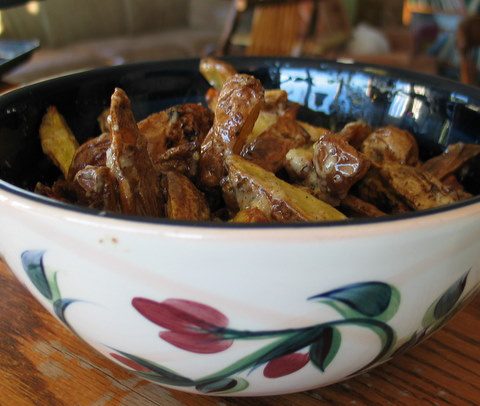 Are you convinced? Have you fetched a pan of potatoes and a head of garlic? Alrighty then. Here’s the keeper.

The original recipe calls for small new red potatoes, but all the knobbly little spuds rolling around at the bottom of your potato bin will work just fine. I used small Fingerlings and just pretended they were new red potatoes.

Mix 1 ½ tablespoons olive oil with ½ teaspoon salt and 1/4 teaspoon pepper and then toss with the potatoes and garlic. Lay the vegetables on a large cookie sheet and bake in a 400 degree oven for 40-60 minutes, stirring after 35 minutes. The potatoes should be crispy brown on at least one side and fork-tender.

While the potatoes are roasting, mix together the remaining 1 ½ tablespoons olive oil, 1/4 teaspoon pepper, 3/4 teaspoon salt, the onions, vinegar, and mustard. When the vegetables are done roasting, let them cool for ten minutes. Squeeze the garlic pulp our of its skins and add the paste to the dressing. Stir well.

Transfer the roasted potatoes to a serving bowl and drizzle the vinaigrette over top, tossing to coat. Serve immediately.