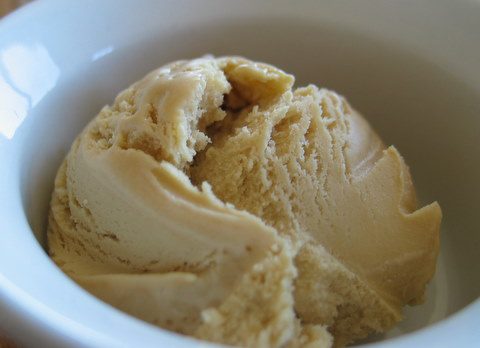 I had a horrible time in the kitchen yesterday afternoon. Everything went wrong. It all started with The Baby Nickel. He was tired and needed a nap (or maybe, I needed him to take a nap), but even after forty-five minutes of flopping about beside me on the bed (while I finished reading See You In A Hundred Years—a book that partly inspired and mostly irritated me), he didn’t go to sleep. I had hoped to write and was plenty annoyed about his wide-open blue eyes. They were pretty, but at that time of day I think he’s cuter with his eyes shut.

I came downstairs, made coffee, and decided to make Deb’s Hazelnut Brown Butter Cake, except I didn’t have any hazelnuts so I substituted pecans. The recipe said to toast the pecans, but I burned them. The second time around I scorched them.

The Baby Nickel and Sweetsie were hovering close by, trying to get as near me as possible, climbing stools, chattering away, picking up utensils and lifting lids, and generally disturbing my (what was becoming sparse) mental peace, but it wasn’t until I was dumping the second ruined batch of pecans into the compost, that I blew a gasket. I started yelling, I AM SO MAD. I CAN’T BELIEVE I DID THAT! GET AWAY FROM ME! And once I started I couldn’t stop, though I did have the presence of mind to clarify myself to my wary offspring: I AM NOT MAD AT YOU! I AM MAD AT MYSELF! EVERYONE GET AWAY FROM ME! OUT OF THE KITCHEN! GO! GET OUT OF HERE! Nickel backed up a little, hovering around the kitchen’s periphery, giggling nervously, and Sweetsie made a beeline to her bedroom where she listened to her tapes, sucked her thumb and twiddled her spit rag. (Later when I went up to apologize for my outburst, she turned her back and wouldn’t talk. I wonder how many therapy sessions she’ll need as a result of that little outburst of mine.)

The third time I tried to toast the pecans, they did not burn. But that was mostly because they didn’t even get toasted, just barely heated through, but by that point I didn’t care—they weren’t burned, and that was what mattered.

The cake, which should have been a fragrant, delicate affair, flopped. The half-pound of vanilla bean-infused butter, the cup (plus two more) of pecans, the six egg whites, were all for naught because I under-baked the cake. It tasted of pecan dough, densely saturated with butter. Edible, yes, but not what it should of been. (I wondered if I could crumble up the cake and toast it to make sweetened crumbs that could then be sprinkled over a fruit crisp, but decided I’d better not—I’d probably scorch them.) In the comment I left on Deb’s blog, I said that I was getting over my pissed-off mood and transitioning into my I’m-gonna-get-this-cake-right-if-it’s-the-last-thing-I-do mood.

I have approximately one cup of pecans left. Think I can do it?

Now, that same afternoon, back in the beginning before the screaming episode and when I was still humming to myself and stumbling gently over the little people that were stuck in my armpits, I started a batch of butterscotch ice cream. I like to multi-task. I also apparently like to multi-fail, because I scorched the butterscotch.

My humming stopped. I dumped the syrup into the compost (lucky chickens), washed out the kettle and, with lips pressed tight together, remade the butterscotch. The second time it turned out fine, but by then I was starting to toss out pecans like they were a penny a pound so I didn’t fully appreciate my little victory. 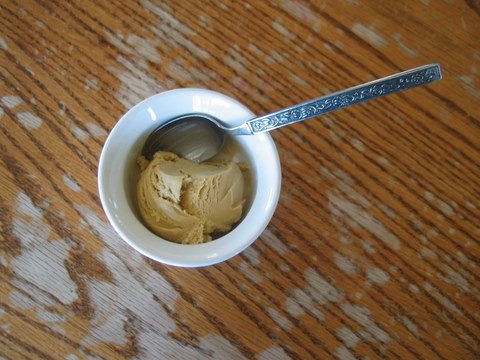 Sweetsie was still around when it came time to temper the egg yolks for the custard, and she cheerfully held the bowl steady as I whisked in the warmed cream, but she was long gone by the time I was straining the ice cream mixture into a small bowl set down in a bigger bowl filled with ice cubes. My hands were trembling as I poured the cold water over the ice to chill the cream, and when I finally lifted the chilled bowl of cream, hands still shaky and nerves shot, a vision of shattered glass and a butterscotch-splattered floor flitted before my eyes. (Try saying that last line five times fast.)

This vision of broken glass, lost food, and wasted time did not come out of nowhere. Last spring when my aunt and my mother were coming to visit, I dropped a half-gallon jar of chilled caramel custard (twelve egg yolks) on our tile floor. I took one look at the mess and backed away silently, they quietly turned and stumbled out of the kitchen, face pale and eyes vacant. Mr. Handsome cleaned up the mess. 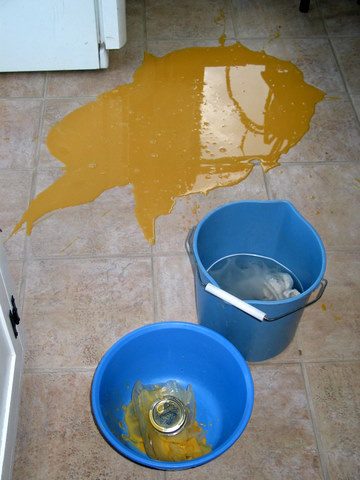 But I didn’t drop the bowl this time, and after supper Mr. Handsome cranked the ice cream (while I communed with my computer, upstairs in my quiet bedroom) for our after-kids-are-in-bed snack. Then, while he stayed up to pay bills and listen to Obama’s address, I climbed the stairs and crawled under the covers, both defeated and victorious, and most definitely tired. 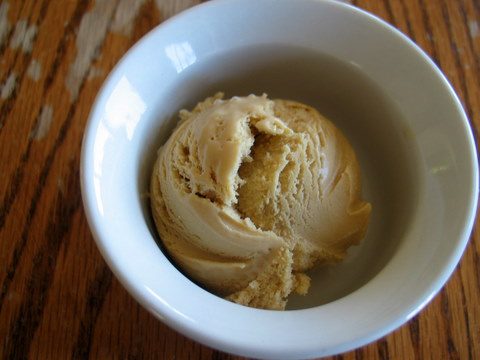 This afternoon things are looking up. I had a little scoop of the butterscotch ice cream, my extremities have ceased twitching, the kids are outside playing in the sunshine, and I think I may be ready to try that cake again soon.

I browsed a variety of websites before I made this ice cream, reading up on different recipes and techniques, and I learned that if you add a bit of alcohol to your ice cream (the alcohol in real vanilla will probably be enough to do the trick), it will stay soft for weeks instead of just a day or two. This recipe calls for two teaspoons of bourbon, and while I was concerned that the flavor would dominate, I do not taste the alcohol at all (and neither my children nor my husband complained). I also learned that you can prevent freezer burn by pressing a piece of plastic wrap over the top of your ice cream before you put a lid on the container.

The texture of this ice cream is ideal: firm, while at the same time softly scoop-able.

Melt the butter in a heavy-bottomed saucepan and then add the brown sugar, stirring until the sugar has melted and the mixture is bubbly. Deb said this would take about four minutes, but I found it took longer. Whatever you do, be careful! If it smells burned, throw it out and start over; hopefully you won’t have to do it more than twice.

Remove the sugar-butter mixture from the heat and stir in one-half cup of cream. The syrup will bubble up and steam violently and you’ll singe your knuckles and yell, but it will all be okay. Keep stirring until the cream has been incorporated. (I still had a few lumps in my butterscotch, so I simply poured the syrup through a strainer to get rid of them.) Stir in the vanilla and bourbon and set aside.

In another saucepan, heat the remaining three cups of cream. Put the egg yolks in a small mixing bowl and break them up with a fork. Slowly add about a half-cup of the warmed cream to the yolks, stirring constantly. Then, gradually add the tempered yolks to the warm cream, stirring constantly. Heat the custard, still stirring, till it has thickened slightly and coats the back of the spoon. Do not boil.

Strain the custard into a bowl and place the bowl in an ice-water bath. Stir in the butterscotch. Occasionally stir the mixture as it cools, adding more ice as needed. Refrigerate the butterscotch cream until thoroughly chilled.

Freeze in an ice cream maker.