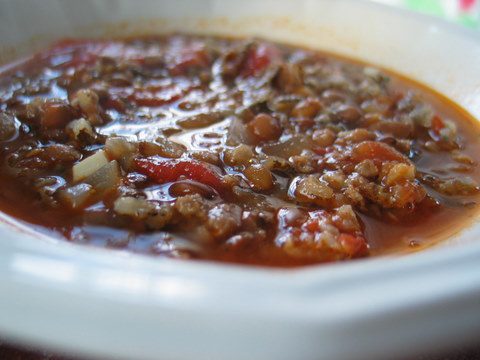 Lentils. I like them. I like cooking them. They feel like … a large nutty grain of whole wheat, but in a legume’s body. Okay, so maybe that doesn’t make them sound too appealing, but trust me, they are quite good. And as an added bonus, they absorb the flavor of anything added to the soup pot.

Sadly, Mr. Handsome does not like them. Oh, he’ll eat them and say thank you, but they’re not His Thing. And it’s not that I’m cooking them wrong because when he was hiking in the Himalayan mountains back before we were married, he lived off of lentils, the real deal, and he still didn’t care for them all that much.

I don’t know what his problem is.

Mr. Handsome’s Nepali adventures are on the forefront of my mind because just the other day I showed another National Geographic movie to the kids called Himalayan River Run. The kids were fascinated with the Sherpas and how they carried their tremendous loads on their backs that they secured with a cloth that looped up over their foreheads. I told them how Papa had a Sherpa when he was hiking, and after the movie we pulled out his photo album and looked at the pictures. They weren’t all that exciting, just a lot of pictures of mountains and of Papa with a nasty case of bedhead, looking really tired.

Now Miss Becca Boo has taken to tying a red scarf around her head. She looks rakish, like she belongs with Johnny Depp in Pirates of the Carribean, not at all like a little Sherpa.

But back to lentils. That Mr. Handsome doesn’t like them in no means prevents me from cooking them. I’m not a very sympathetic wife, and besides, I figure if I don’t cook them now, then my children may never learn to enjoy them either, and I absolutely must prevent that deplorable state of affairs from ever becoming a reality.

My favorite way to cook lentils is in a soup, and the good news is that Mr. Handsome actually does enjoy this soup. (I think it’s mainly the curried dahls at which he directs his turned-up nose.) It’s simple fare: a pot of lentils simmered with stewed tomatoes, browned sausage, garlic, onion, and some marjoram. I served it, along with cheesy chunky broccoli soup (and salad and sourdough breads), the night that the relatives descended. It’s a good company soup because it can be made ahead of time, refrigerated or frozen, and simply reheated when the time comes to dish up.

The only trick to remember about lentils is that you want them to be perfectly soft before you add any salt or tomatoes (or wine or lemon juice) because the cooking process is slowed almost to a halt once the acidic ingredients are added, and then you’re left with crunchy lentils, which is not a good thing at all.

Brown the sausage with the onions and garlic and set aside.

In a soup pot combine the lentils with about a quart of water. Bring to a boil and then reduce the heat to a simmer and let the lentils cook for about 20-30 minutes. Check occasionally, and if they are getting too dry, add another cup of water.

Note: The soup that is pictured above (not the same soup I served to the relatives) also has some wild rice added to it—I was a little short on lentils so I threw in a couple handfuls of the rice to bulk it up.