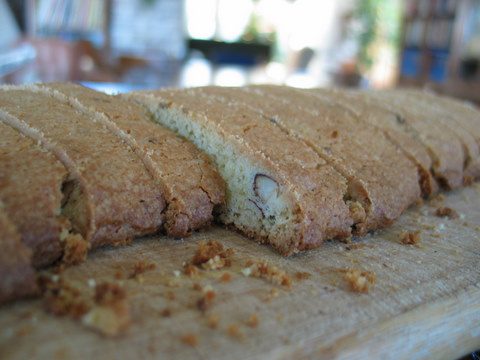 I didn’t like this recipe when I first made it. I thought the biscotti insipid, and since the recipe made an enormous quantity, I quickly went about handing them out to family and friends.

Isn’t that awful? Giving away baked goods that I’m not crazy about myself?

However, it appears that no harm was done—the biscotti were reportedly consumed and enjoyed, or so the gracious recipients claimed (I do wonder if they might just be taking a gamble: figuring that one of every three or four food items I send their way will be tasty, they praise them all and then hope for the best), and over the next few days, I changed my mind. I kept wandering over to the jar and fishing out another one. And then another. There was something about them that made me keep coming back for more. Was it the rum? The big chunks of crunchy almonds? The anise seeds? Whatever it was, it was addicting. I stopped giving them away. 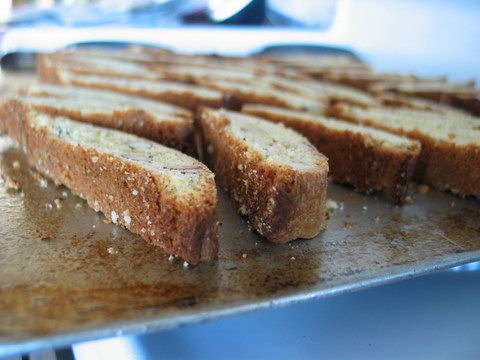 In retrospect, the reason I didn’t fall in love with them immediately was probably because I was biscotti-ed out. I had been on a biscotti kick for a week prior, turning out a variety of flavors, pumpkin, anise-lemon, cinnamon-sugar, and orange-chocolate, in the same fashion that I turn out babies, bang-bang-bang. And maybe the flavors didn’t ripen until a couple days post-baking.

Anyhow, I definitely like them now. The recipe is a keeper, passing my biscotti-taste tests, of which I have had many. See, it’s hard to find a good biscotti recipe. I ought to know. While there are all sorts of biscotti recipes clogging up cyberspace and cookbooks—fat-free, chocolate-dipped, maple syrup-sweetened, whole-wheat, nut-and-fruit-studded—sadly enough, not many of them are actually that good. Some are too hard, others are too crumbly. There are the ones that are overloaded with goopy stuff (if you are after something that sweet, just make cookies) while others resemble a popsicle stick that has been used to adorn a child’s sand castle at the seashore. Some never seem to be able to get hard all the way through (resembling a soggy sand-coated popsicle stick), and so on.

But! Do not despair! I have been doing the dirty work of experimentation, for you. (That’s a lie. I’m doing all this work for myself and no one else. I’m a true-blue selfish woman, one who loves her biscotti.) My goal is to have a broad repertoire of biscotti recipes at my fingertips, all of them flavorful and crunchy and deserving of the time that it takes to turn them out.

Which brings me to my next point. Before you start making biscotti, you need to understand a couple things. 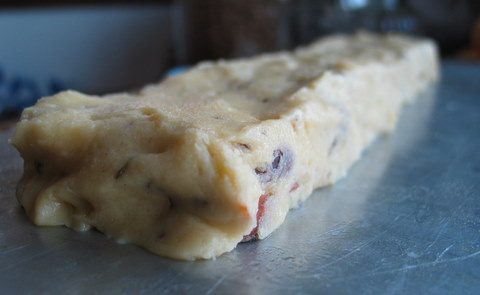 First, biscotti is easy-peasy, requiring that you master a simple process that involves mixing up a cookie-type dough, shaping the dough into logs, baking the logs, slicing them, and then baking the slices again till they are toasty brown and dried through. 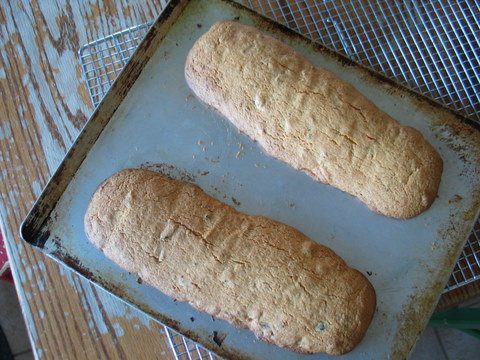 Second, biscotti is tricky-wicky, mostly in regards to the baking process. Sometimes it’s hard to get the logs of dough baked all the way through before they get burned at the edges. Or, if you let the logs cool for too long before slicing them, you may end up with a mess of crumbs. Over-baking the sliced biscotti (don’t do it!) can cause it to, believe it or not, get too dry. While it is fine to mix up the biscotti dough and then refrigerate it until later, make sure you have allotted yourself enough time for the baking process. You will need a minimum of two or three hours—do not rush.

After baking cookies, I almost always put them directly into the freezer—rarely do I store cookies in a cookie jar since they are so quick to lose their freshness. But biscotti is a different story. Because it is dry it keeps for weeks in an airtight jar—when it is placed in a ribbed, heavy glass jar and set on the kitchen counter, it becomes an attractive insurance policy against an ever-possible-but-not-likely (at least in my kitchen) dessert drought. 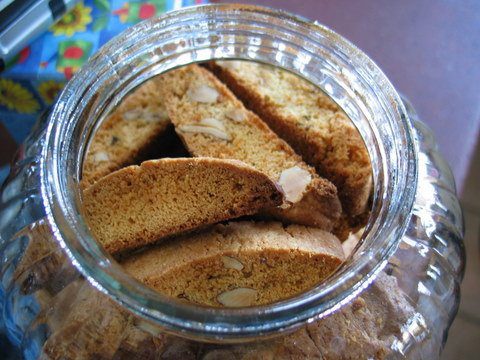 Furthermore, its dry constitution makes it the ideal item to ship (in a pretty jar, of course, wound with a curly ribbon ‘bout its glassy neck) to a faraway friend. If these are the biscotti you choose to send through the mail, your friend will not, I seriously doubt, feel foisted-upon in any way.

The original recipe called for brandy, but I didn’t have any so I used rum instead. The large chunks of almonds added a lot of character to the biscotti—I would argue that it would not be wise to substitute with sliced almonds.

Cream together the sugar and butter. Add the eggs and beat well.

Grease two cookie sheets. Scoop one-fourth of the dough to the cookie sheet and, using fingers that have been slightly wetted with water to prevent the dough from sticking to them, press the dough into a log about two inches wide and twelve inches long. Repeat with the remaining dough (to clarify: you’ll have two logs on each pan).

Bake at 350 degrees for about 40 minutes, or as long as you can without them burning. (It’s important not to under bake them because then the biscotti will be heavy.) The logs should be golden brown and cracked on top.

Allow the logs to cool on the cookie sheet for five to ten minutes before transferring them to a cooling rack. Let them cool for another ten minutes and then slip them on to a cutting board. Using a serrated knife, slice them into 3/4-inch thick slices. It doesn’t really matter if they are a bit thinner or thicker as along as they are all about the same size. If you prefer longer biscotti, cut them on the diagonal; for shorter, stubby biscotti, cut them straight across.

Place the biscotti back on the cookie sheet, this time laying down on their sides, and return the cookie sheet to the oven (the temperature reduced to 300 degrees) for another forty minutes. After about twenty minutes, turn them over so they will brown more evenly. Allow them to cool completely before storing in an airtight jar on your kitchen counter.

Serve with a cup of tea or coffee.

Note: If your oven is at all cantankerous like mine, you will probably want to bake only one cookie sheet at a time. This makes the whole process take that much longer (twice, to be exact), but it’s better then charring the goods.