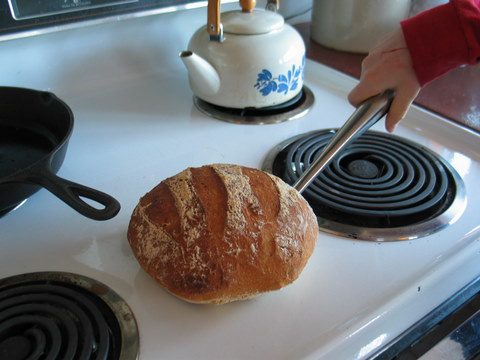 I’m experimenting with a new bread recipe. This may strike you as rather odd, considering that I already have so many bread recipes that I like. Why in the world would I need another one? I don’t, really. And besides, who said anything about needing a new recipe? Not me, that’s who.

My reasons for this latest experiment are these: I like baking bread and if there is something good out there then I certainly want to have it tucked securely under my belt. And, if it’s not any good, than I’ll chalk it up as a learning experience. I have had lots and lots of learning experiences. It would appear that I am quite the learned gal. However, I also have a bundle of good bread recipes under my belt. So there.

This new recipe (the link was emailed to me by my girlfriend Laurel) is touted as being a Five-Minute Bread. When I read that, Skepticism, that little-bodied, big-headed creature with the buggly eyes who lives somewhere around my spleen, reared its fussy head and took a gander at the computer screen. Ha! This is SO stupid. There is nothing, and I mean NOTHING, fast about good bread. Good bread, QUALITY bread, takes time and energy. It may be easy, yes, but fast? I don’t THINK so.

I stuck my fingers in my ears and continued reading. This was hard to do, considering that it took so long to load each new page of the article (I think there were something like twelve pages), but after the first page, my two feelers, Curiosity on the right and Interest on the left, start to wriggle up out of the top of my scalp, the part right above my worry-creased forehead, and poke around, gently buzzing, and then I just had to continue reading, for their sakes if for nobody else’s.

Hm, could this possibly work? I tapped my tooth with my index finger. There was only one way to find out.

I drew in a big breath, fondly patted Skepticism on the head , and walked over to the kitchen counter where I quickly (but of course) mixed up the water, yeast, salt, and flour (only four ingredients) with a spoon, no kneading necessary—Red Flag Alert! shrieked Skepticism—and then slid the bowl into the fridge where it would sit, slowly developing a sourdough flavor (yeah, right—you’re SUCH a goose) for up to two weeks, or until I decided to bake a loaf.

That was yesterday. Today I decided to bake.

I retrieved the bowl of dough from the fridge, cut off a blob of the bubbly mass, lumped it into a boule-like form, slashed the top, and let it rest at room temperature on a heavily floured and cornmeal-ed board for about 45 minutes. Then I baked it. This is what I pulled out of the oven.

I grinned from ear to ear, but Skepticism, who had wormed around till he was perched on my right hip, harrumphed, lips pursed and eyes all squinty. I cut a piece, ate it, and then fed a bite to Skepticism. Too doughy, he kvetched. Yes, it is a bit doughy, I admitted, but this is the first baking. A little more time in the oven would probably do the trick. My, but the crust is delicious, don’t you think? A mixture of chewy, caramel, and crispy.

There is no sourdough flavor whatsoever. Well now, really! I knew better than to expect that. We mixed up the dough only yesterday. Give it another seven to ten days and it may develop a hint of sourness. Just you hush up.

It’s too salty. Oh, good heavens! Maybe it is, but we can fix that. Hush now! 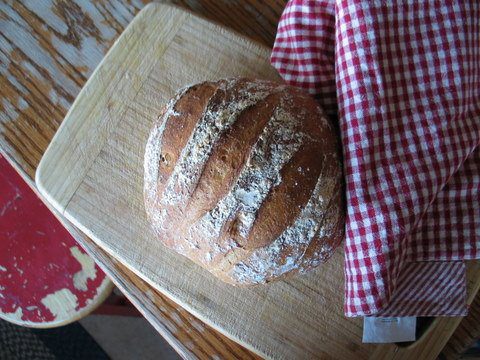 And then I ate almost the rest of the loaf myself, making lots of smacking noises and not sharing even a crumb with the little stinker. He, naturally, remained diffident, though I couldn’t help but notice he was watching my every move out of the corner of his eye.

The dear little sourpuss; I am rather fond of him. 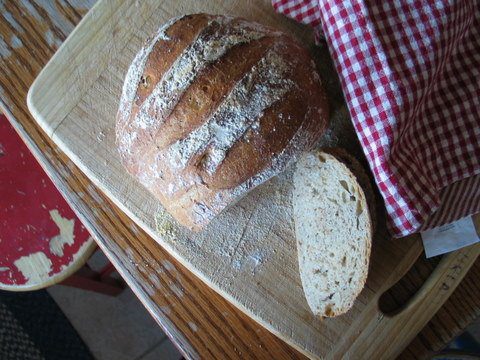 I would type up the whole recipe for you right now, but Skepticism might have convulsions. And skeptical convulsions in the general area of my spleen aren’t that much fun. So I think I’ll wait till after a couple more baking sessions, after Skepticism’s belly has been stuffed and his whiny voice shushed, before I pass you this potentially doozy-of-a-bread recipe. Of course, if you’re dying of curiosity, you could go check out the link for yourself any old time, day or night.

On second thought, you better look it up at night when your inner skeptic (that is, if you happen to be gifted/cursed with one) is more likely to be taking a snooze.