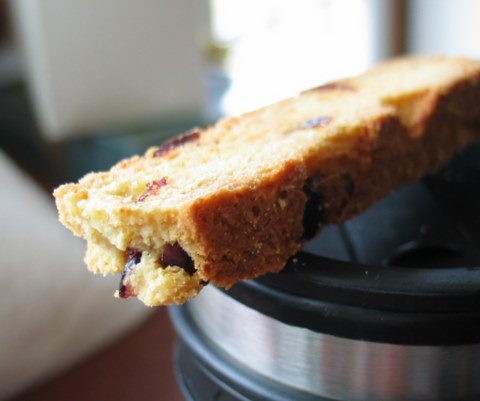 This was my first successful biscotti recipe; it’s one that I have been making for a good three or four years, at least.

The recipe is scrawled on the bottom of a jaggedly-torn piece of paper, both back and front of which are covered with biscotti recipes. None of them were any good, except for this one. Actually, it can’t really be called a recipe because all I have written down is:

I can tell, for no other reason than just because I can, that I’m supposed to follow the above recipe for Anise Biscotti, which I made the other day and accidentally left out half of the sugar, which caused the biscotti to end up tasting like that sand-coated popsicle stick I spoke of earlier, which, by the way, I have never tasted (the sandy popsicle stick, not the biscotti), which— Okay! I’ll stop!

Um, where was I? Oh yes. The non-sandy biscotti. 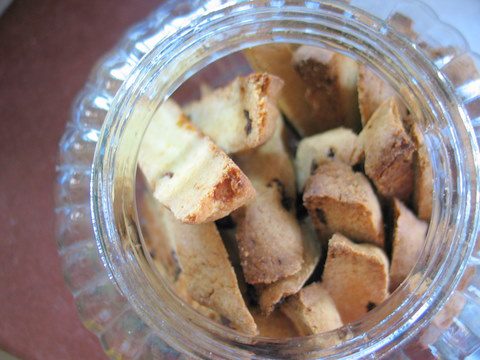 In this recipe, the classic combination of orange and cranberry won me over from the get-go. The dried cranberries add a sweet-tart chew that compliments and counters the citrus-y dryness. Mr. Handsome, not one to fawn over biscotti or any other dry Italian cookie, thoroughly appreciates this one. So, without further ado, I present to you…

Orange-Cranberry Biscotti
From my recipe file, kind of miraculously deciphered from my cryptic chicken-scratch

Beat together the sugar and butter. Add the eggs and orange zest and beat some more. Mix in the flour, baking powder, and salt. Stir in the dried cranberries.

Divide the dough into two parts and on an ungreased cookie sheet shape each half into a log, approximately three inches wide and ten inches long. Bake the logs at 350 degrees for 25-30 minutes, cool for 10-15 minutes, slice, and re-bake, this time at 325 degrees for 15-30 minutes, turning once. (For more thorough biscotti-baking instructions, go here.)

Store in an airtight jar.