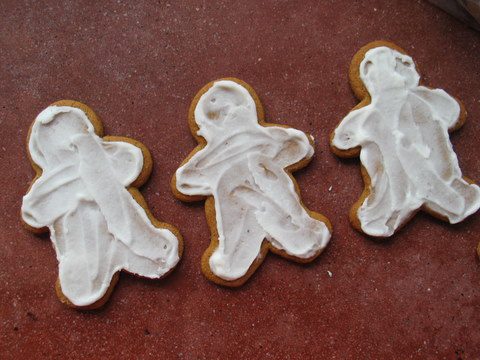 I’m sitting at a bagel shop, chewing on an plain egg bagel, drinking the cup of café con leche that I brought from home (yes, I do believe I’m turning into a coffee snob), and writing. I have been in the house for the past two days, only going outside to get the mail and hang up laundry, so I was getting a little stir-crazy. My goal is to write for two hours and then head home to join the cleaning/cooking/tree-decorating melee. Um, on the other hand, maybe I’ll stay here for three hours instead of the agreed-upon two. Think Mr. Handsome would mind?

Speaking of Mr. Handsome. He got up at 4:30 this morning—we went to sleep at 9:30, so waking up at that early hour wasn’t a truly terrible thing—and went downstairs and started cleaning. I was supposed to leave the house at 6:30 this morning, but I didn’t wake up till 6:38. I rushed downstairs to see if it was still okay if I left (the question was more protocol than anything else because I wasn’t about to give up my get-out-of-the-house-and-write time), and there he was, scrubbing down the hanging light above the kitchen sink. When I came out of the bathroom he had moved on to wiping—nay, washing—down the open shelving in the kitchen, and by the time I was leaving, the upper half of his torso was stuffed under the kitchen sink where he was fixing the leaky sink. And then, when the car windshield was too icy, he, without me saying a word, pulled on a coat and went out and readied the car for me.

On the other hand, it is his family that is coming to visit, so he better help out.

But! That doesn’t negate the fact that he’s taking charge and initiative (I did have a list of stressing-me-out-items conveniently scrawled on our hallway’s white board—this morning I noticed there were several blank spaces that had been erased), and I just adore a man who takes the cleaning initiative.

You know, that was one of the first things I noticed about Mr. Handsome, besides his black hair and blue eyes and less-than-dainty speech. Mr. Handsome had come down to Texas to visit his sister, who’s voluntary service unit I was a part of for the summer between my sophomore and junior years of college. I had organized a house cleaning for our unit’s activity night (writing that just made me feel like a total stick-in-the-mud Prude, with a capital P, but, in my defense, the house was Filthy, with a capital F.) The evening of our cleaning spree, Mr. Handsome drove up in his red pick-up truck, charged into the kitchen, plunked down his toolbox, and proceeded to yank the stove away from the wall and start scrubbing. (I don’t remember how his toolbox helped him with scrubbing the walls—he probably fixed something while he was back there.) I already had my eye on that boy, but I payed extra close attention after that.

Ladies, if you are looking for a man, a real man, I suggest you orchestrate a cleaning party of some sort, invite the man-under-scrutiny, and see what sort of damage he can do with some Ajax and a cleaning rag. If he brings a toolbox, he gets bonus points. This a true-blue test, I’m tellin’ ya. I’m sure it’s noted in some dating handbook . . . somewhere.

Okay, that’s enough of that. I’m here to tell you about another cookie recipe. I said that I would try to get them all down, and so I have to, well, get them down. So, enough of the rambling.

Everyone makes Gingerbread Cookies for Christmas. I think. I mean, gingerbread is Christmas, even in other cultures. Maybe especially in other cultures. If you’ve read Treasures of the Snow, you will recall that on Christmas Eve all the Swiss village children sled down the mountain to the village church for the Christmas program, at the end of which every child is given a gingerbread man. Lucien and Annette (neighbors and main characters) walk back up the mountain together; Lucien eats his gingerbread all at once, but Annette saves hers. When she gets home she heads for the barn loft instead of the Chalet, in order to talk to the cows about the birth of the Christ child and to enjoy the Christmas magic. But then her father comes looking for her. Her mother just had a baby and wants to talk to Annette, so Annette hurries inside. And thus begins the story. It makes for a fantastic read-aloud. 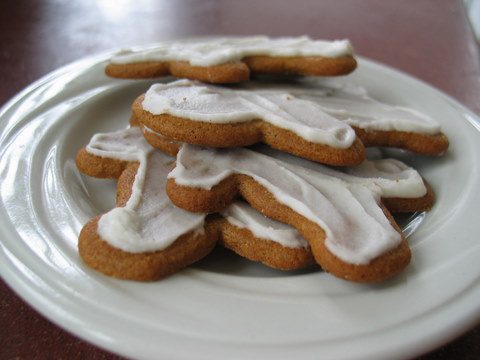 Back to gingerbread: I made some. I think part of the reason that the kids are thrilled by the little men is that they are, well, little men, and naturally, little men-shaped cookies taste better than a plain circle cookies. 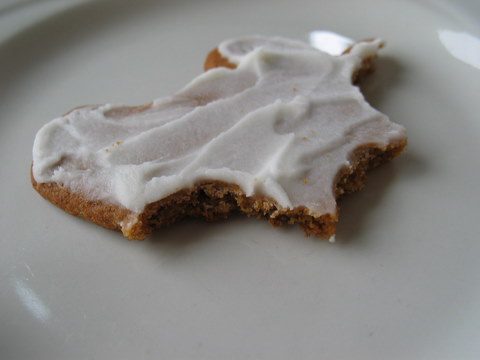 I hardly ever make cut-out cookies during the year (except for butter cookies at Valentine’s Day) because it just takes too dang long. Back when I had more time, I would ice the gingerbread people with a tube decorator, and one year I made a whole batch of bikini-clad gingerbread ladies—they tickled me pink. Now, I just ice the genderless people with a thin layer of buttercream frosting. It’s supposed to take less time, but it still ends up taking plenty long. 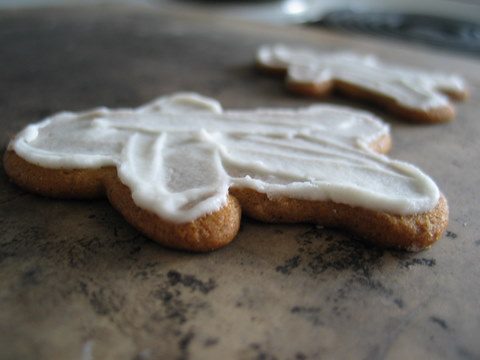 I actually like the simplicity of the iced little men/women/boys/girls. Simplicity is classy, right?

The absence of salt is not a typo, just in case you were wondering.

Mix together the butter and sugar. Add the eggs and molasses and beat some more. Add the dry ingredients and mix well. Cover the dough with plastic wrap, or a shower cap, and chill in the refrigerator for a couple hours.

On a well-floured counter, roll the dough out to a one-eighth inch thickness. Cut out the little men, place them on lightly-greased cookie sheets (they will puff, just a little, so keep about a half-inch space between the cookies), and bake them at 350 degrees for about 10 minutes. I like my gingerbread to be crispy, so I bake them till they’re starting to brown around the edges, but if you like them soft, under-bake them just a tad.

After removing the cookies from the oven, allow them to rest on the hot cookie sheet for a couple minutes (this extra time allows them to firm up a bit) before transferring them to a cooling rack. Once they are completely cool, ice them with buttercream frosting, in whatever fashion strikes your fancy.

To freeze: see the directions for the butter cookies.