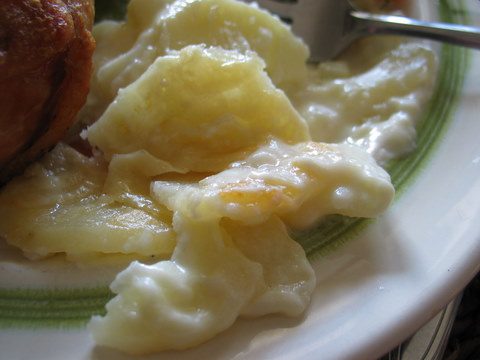 Back when I posted about my large stash of potatoes and asked for advice on how to use them up, I got a number of good suggestions, one of which came from my girlfriend Linell. Her recipe immediately caught my eye because it involved a lot of cream, as in three cups of cream. I have way too many quart jars three-quarters filled with cream (cream I skimmed from our half gallons of raw milk that we purchase from a local farmer) piled in my chest freezer, so a recipe that used up that much cream seemed mighty handy. Not to mention that I’m rather fond of cream.

This particular recipe was simple, too. All there was to do was simmer the thinly sliced potatoes in the cream, pour them into a buttered baking dish, give them a light dusting of Gruyere, and then bake them in the oven till bubbly and golden brown. Simple and rich—it couldn’t get much better than that, now, could it? 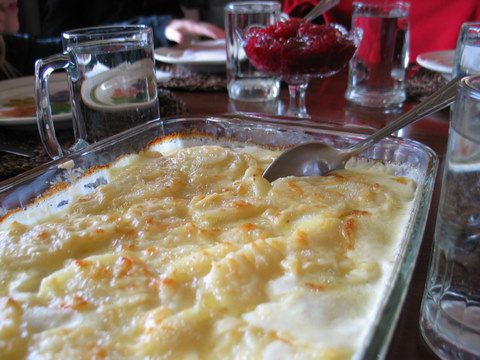 I’ve made them twice, and I’m smitten. The recipe calls for only a few tablespoons of cheese, but the potatoes taste like there is more cheese than that, I guess because the starches from the potatoes combine with the cream to create its own unique potato-y cheesiness.

Potatoes in Cream with Gruyere
From my girlfriend Linell, and according to her, originally from Julia Child.

Put the sliced potatoes, cream, garlic, and bay leaf in a heavy-bottomed kettle. Simmer on the stove top until the potatoes are tender. Season with salt and black pepper. 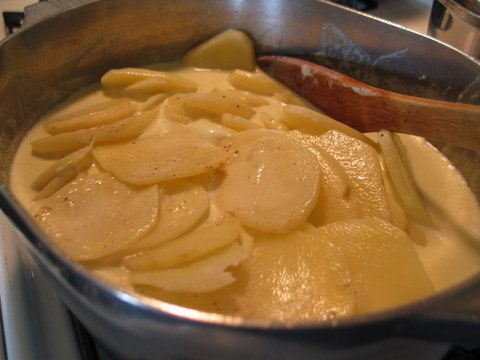 Pour the potatoes into a greased 9 x 13 glass pan, sprinkle with the cheese… 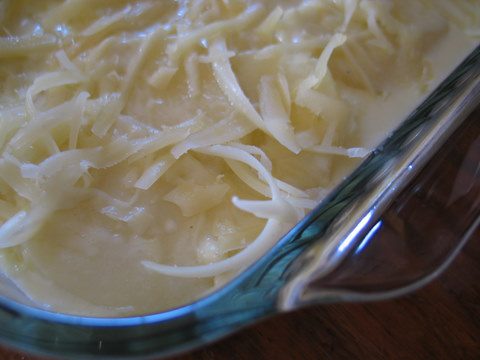