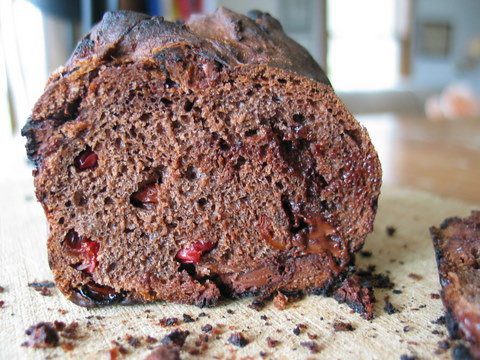 I told you I would tell you about this bread, Chocolate-Sour Cherry, but I just haven’t gotten around to it till now.

The truth is, I don’t like this recipe, and I feel guilty for not liking it. I mean, who in their right mind doesn’t like chocolate-sour cherry bread? I imagine that long-legged, long-necked, black-boot-wearing French women eat it all the time. Probably even for breakfast.

Maybe I need to put on my black boots and try it again. It might taste different then.

But I can’t fix the long-neck deficit. 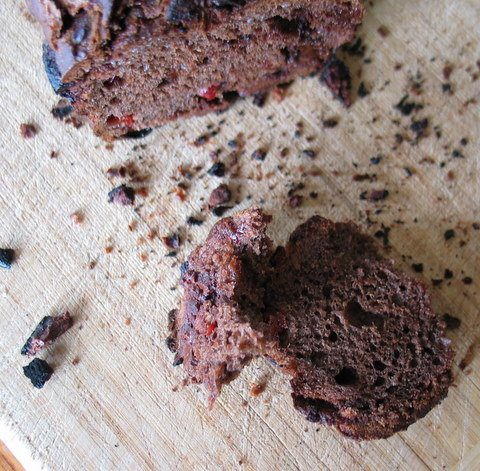 The other possibility is that I’m not making it right. But this last time I followed the recipe exactly. I used my own dried cherries and good chocolate. But still, I just don’t like it. It’s too dry. And I don’t like the sourdough-bread-turned-chocolate flavor.

However, I know there are others out there who have longer necks than me, so I’ll take the time to type up the recipe for you. You’re welcome.

Put the first six ingredients (down through the flour) in the mixing bowl and mix for three minutes. While the mixer is still running, add the butter, a tablespoon at a time. After the butter has been incorporated, add the salt and mix for about nine more minutes. Add the cherries and chocolate and mix for just a couple minutes, until it is well blended. 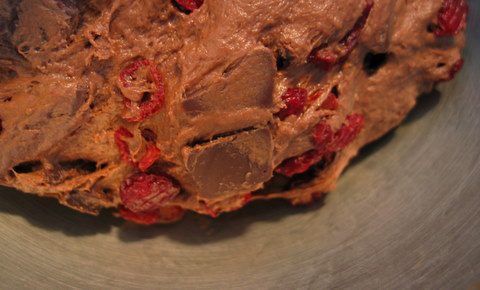 Transfer the dough to a clean, oiled bowl, cover with a shower cap let sit at room temperature for a couple hours. At that point, cut the dough into the desired sizes and shape into loaves (I made four mini-loaves, but you can also make two regular bread loaves, though they will be small). Cover with plastic and refrigerate overnight.

The following morning, remove the loaves of bread from the refrigerator, take off the plastic wrap, and cover the loaves with a cloth. When the dough has reached a temperature of 64 degrees, dock the tops (I think I forgot to dock mine), and bake at 400 degrees for 30-40 minutes.