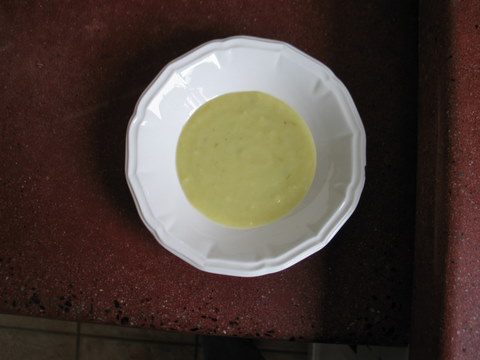 I’ve been so cold lately; I can’t warm up. My feet feel like rocks—hard, heavy, and rough.

We have an open-air house; there are lots of open spaces where the air can get in. And the air doesn’t just quietly sneak in; it blasts in. The other day Sweetsie told me that it was snowing in the house. I said, “It is not,” and went about my business, but she kept saying the snow was coming in the house, so I finally went over to the closed kitchen door where she was standing and sure enough, the snow was blowing in through the crack in the door. (When Mr. Handsome got home, he pointed out that you have to close the door all the way if you don’t want the snow to blow in. Duh, honey. I thought it was shut.)

We also have holes in our floors. These holes are big enough for us to have “lost” numerous toothbrushes (the monsters in our basement have plaque-free fangs). We also have big cracks in between the floor boards and under the front door. Furthermore, the kids have a bad habit of opening the windows (they like to climb in and out—more fun than the door, I guess) and then neglecting to shut them. To make matters worse, we live on the side of a valley (not to be confused with living on the side of a mountain) and we get tremendous winds that pound the house, rattling the tin roof (sounds like an earthquake—I was in a small one in Guatemala and it scared me senseless), and knocking the porch rockers over backwards.

All this means that even though we try to keep the main part of the house at 70 degrees, the floors remain icy cold and my feet get chilled despite my lusciously L.L. Bean slippered feet, and everyone knows you can’t really warm up if you have cold feet.

As a result of all this coldness, all I want to do, all day long, is sit around by the fire. (I’m in front of the fire right now. I fell asleep by the fire last night. I did my SSR by the fire this morning. The fire is a good place to be.)

And it means that a bowl of hot soup holds great charm.

I made a good soup the other night. Actually, it wasn’t that great the first time around because I was off on my calculations, but the next day I corrected them and then the soup was fine. It’s a classic recipe, so you’ve probably already heard of it: Julia Child’s Potato-Leek Soup.

I first heard of it when I read Julie and Julia a couple years ago. The author of the book (hear, hear, Oh Blogger Brethren—her book started as a lowly blog!) talked about this soup, imparting only the sparsest of directions, so I made it and it was simple and every bit as good as she promised it would be.

I don’t normally buy leeks, but now, with this dearth of potatoes cluttering up my basement, I decided to make the soup again. It certainly couldn’t be any more simple to make: potatoes and leeks simmered in water, roughly mashed, and seasoned with salt, black pepper, butter, and cream. 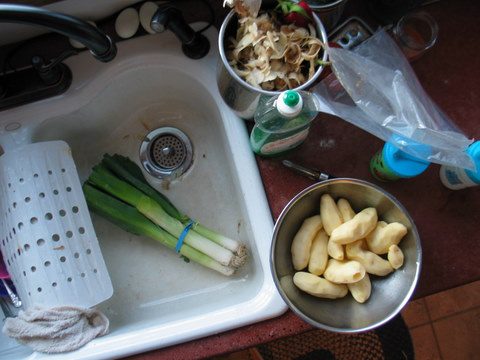 A pleasant bonus: the kids liked it. The Baby Nickel scoured his bowl with his tongue.

Potato-Leek Soup
Adapted from Julie and Julia, by Julie Powell

These amounts are only guesstimates. You are aiming for a semi-thick creamy soup of pure coziness.

Of course you can garnish the soup with chives or parsley or rosemary or cheese or bacon or boiled eggs, etc, but this bare-bones soup needs not a single enhancement. It does not, in any way, disappoint.

Put the potatoes and leeks in a soup pot and add just enough water to cover. Simmer till the veggies are tender. Roughly puree the soup with an immersion blender, or with a hand-held potato masher. I like it to be just slightly chunky. Add salt and pepper, the cream and butter, and heat through (do not boil). Eat.