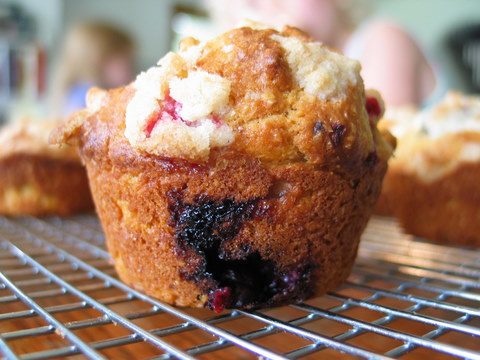 There are many thoughts and ideas floating around in my head. I could pick out just one to write about, or I could try to tie them together into one neat little package, but I’ve decided against that since it would take effort and discrimination, two characteristics that are not in my possession at the present moment. Instead, I’m going to write about all of it. Reallyreallyfastandallatonetime. Splat.

(In college, my Girlfriend Corinna used to call me “mush-mouth, sieve-head, splat”. That pretty much says it all.)

Paprikahead posted about some cornmeal peach muffins. I put the recipe aside, thinking I’d make them someday, but then they somehow slipped onto Saturday’s “To Do” list, so yesterday I made them in time for lunch. Instead of peaches, I added chopped up pears, red raspberries, and blueberries. I think I maybe ate four.

For the past couple summers I have made a Pesto Torte, a dip with layers of cream cheese and ricotta, basil pesto, and sun-dried tomato pesto. I found the recipe a couple years ago when I was sitting in Barnes and Noble perusing the cookbooks, and I promptly jotted it down. Copying that recipe down was quite possibly was one of my wisest moves ever because it turned out to be a really really really good recipe. (I have no idea in which book the recipe was hidden, though I think the author was a female living in the south-western United States.)

Every summer I would make two big springform pans of this torte, and once it was all assembled and frozen solid, I would slice it into serving portions and wrap them up individually and stick them back in the freezer. It was so simple to pull out a chunk, set it on a big plate to thaw, and ring it with crackers. I take it to church potlucks, serve it at parties, and pull it out as an appetizer or to bulk up a meal. People always rave, and that makes me feel good.

I was starting to feel the pressure.

So when I was in the grocery store a couple days ago, I picked up the cream cheese. I looked at the containers of ricotta but since I hadn’t calculated how much I would need, I bought a gallon of milk instead. I figured I would just make my own ricotta. Huh? Yeah, I know, I’m crazy. But somehow at the time it had seemed like a sane, rational idea.

So yesterday, while we were in the middle of making grape juice and flailing and sorting dried beans, I made ricotta and then two pesto tortes. Let me tell you, I was not thinking clearly that night in the store, because all the while I was making the ricotta I kept having visions of colorful plastic containers filled to the brims with ricotta. What was the problem with buying two or three boxes of ricotta and having leftovers? You got me there.

(For those of you who don’t know me, I’ve made ricotta before, as well as a variety of soft cheeses, so I did know what I was doing. And I have a little secret in the basement that I plan to tell you about someday. It involves a little refrigerator, and some small wheels of Gouda and Parmesan.)

I’ve ordered a lot of my cheesemaking supplies from Ricki’s store, the New England Cheesemaking Supply Company, based in Ashfield, Massachusetts.

Pour the milk into a large kettle. 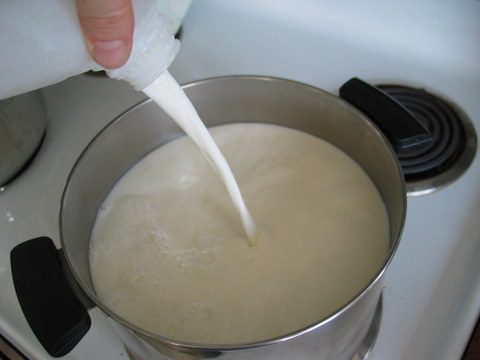 Stir in the salt, 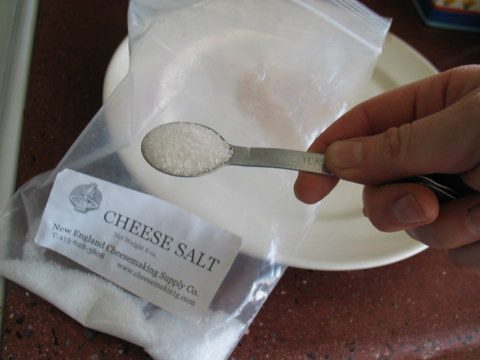 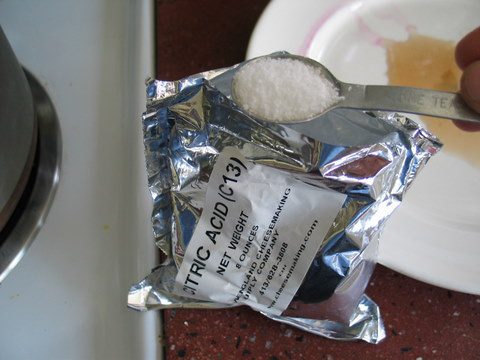 The citric acid causes it to curdle a little bit almost right away. 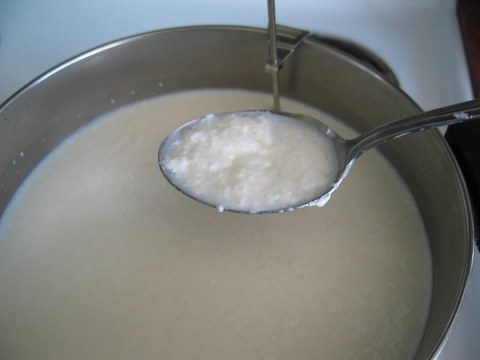 Heat the milk on high heat, stirring periodically in the beginning and continuously towards the end, until it reaches 185-195 degrees, but do not boil it. (You can make this cheese without a thermometer—just stop right before it boils.) 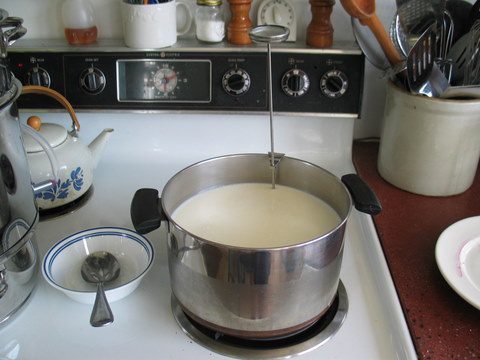 When it’s almost to the boiling point, the milk will turn from it’s creamy white color to a yellow-greenish color, signifying that you now have curds and whey and the cooking process is complete.

Dump the whole mess into a cheesecloth-lined colander that’s sitting on top of another large kettle or bowl. 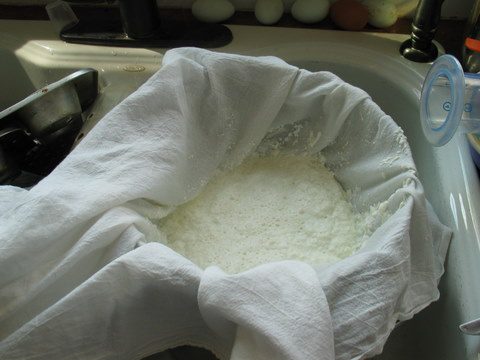 You can save the whey to use in other recipes, for example, in place of water when making bread. 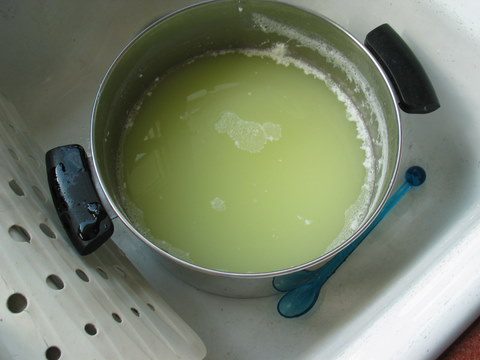 Hook the corners of the cheesecloth together and let hang for about 30 minutes. (I bind my cloth together with a sturdy rubber band, push a chopstick under the bands, and then lay the chopstick over my coffee mug hooks. Necessity is the mother of invention, yes indeed.) Make sure to put a bowl underneath the bag of cheese to catch the whey that will drip-drop out. 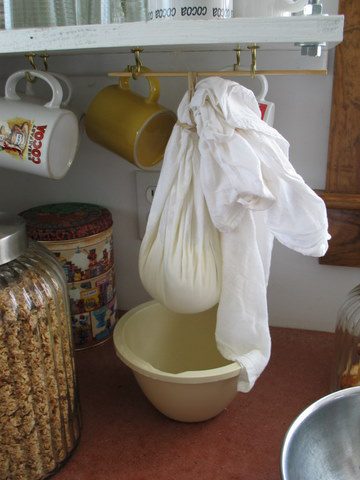 After the 30 minutes is up, dump the cheese into a bowl, 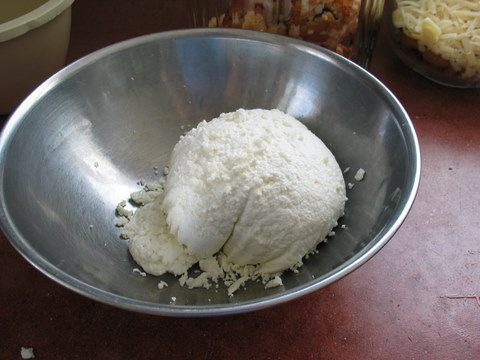 and pour a couple glugs of cream over top. Add another ½ to 1 teaspoon of salt and stir well. 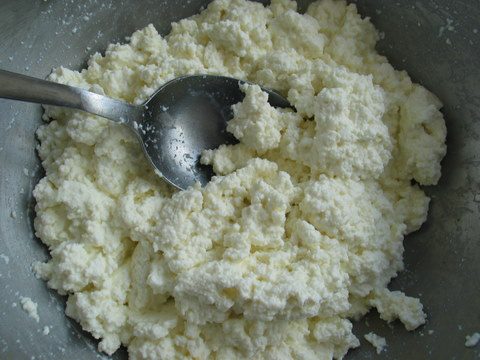 Pesto Torte
When my Girlfriend Gen made the torte, she actually called me to see if I would mind if she posted the recipe. Of course not, I declared. However, once I made the torte, I developed a hankering to include it in my recipe index. I mean, it is one of my standbys. So I called Gen and asked if she would mind if I’d include the torte in my index, only link it to her post (I have no desire to go through the whole process of typing up the recipe, especially since Gen has already done such a fantastic job of that already). Of course not, she declared.

So, here’s the Pesto Torte we’ve all been declaring about.

Now, after I had made the cream mixture for the pesto torte, I just happened to get out some muffins for the kids to eat as a snack. As I was tearing the muffins in half, on the counter right beside the bowl of ricotta-and-cream cheese mixture, I got an idea. I spread some of the cheesy cream on the muffin. 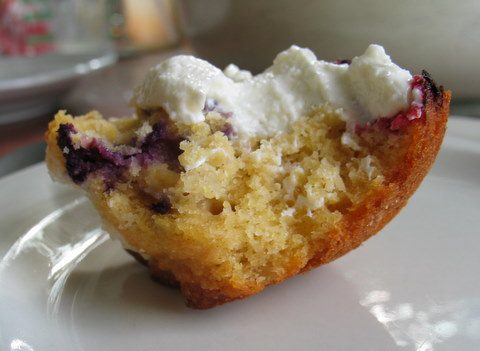 Oh my lands! It was a perfect combination: ricotta and cream cheese on a fruity cornmeal muffin. I’m filing that cream mixture recipe away, ready to be used the next time I serve these muffins, or any hearty muffin, for that matter.

On Friday evening Mr. Handsome decided that it was time to pick the grapes (that’s the polite way of saying that I told him he had to go pick grapes now). Here he is on the ladder, picking away. 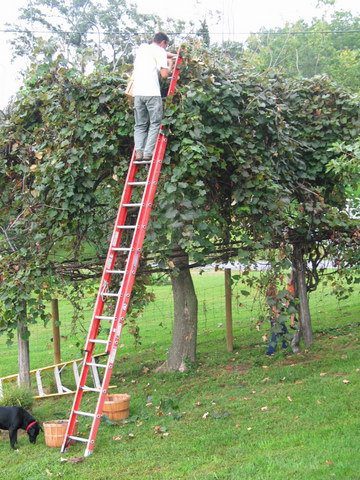 He is not really being a friendly person, waving to the camera, in the following photo. 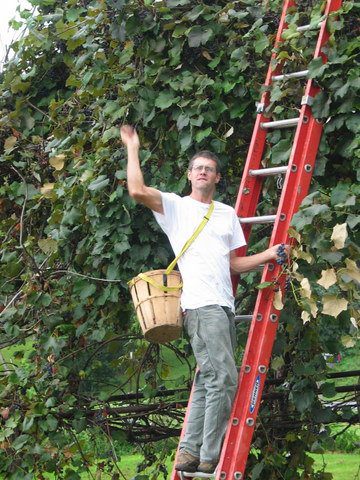 He’s actually winding up to hurl a grape in my general direction. He wanted me to come help him pick, but I was refusing, preferring instead to take photos of him picking grapes and then to sit on the deck shelling the black beans with Sweetsie and listen to him mutter about how unhelpful I was. 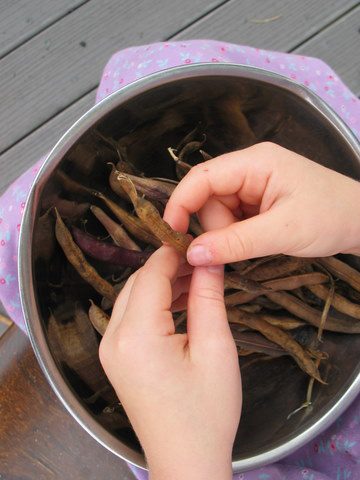 I had ordered a pack of fifty Cherokee Trail of Tears Black Bean seeds from Seed Savers, which yielded about a quart and a half of hard black beans. I will save nearly half of the seeds for next summer’s planting, and the following winter we will feast on black beans. 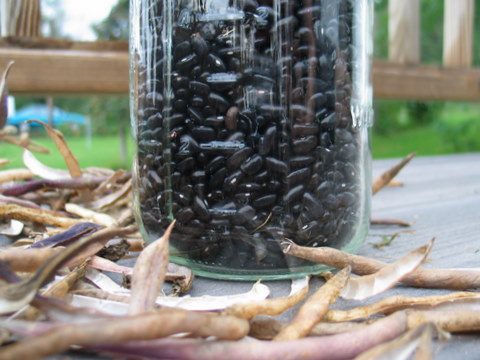 These yellow-brown beans are called Boston Favorites. I think. (I planted several different kinds and didn’t mark where I put them and not all of them germinated so that’s why I’m a little confused on the identities of my beans.) They don’t seem as hard as a dried bean should, and they are a bit yucky and moldy. We’re having to pick through and throw out a lot of them, so I probably won’t save any of them for next year’s seed. 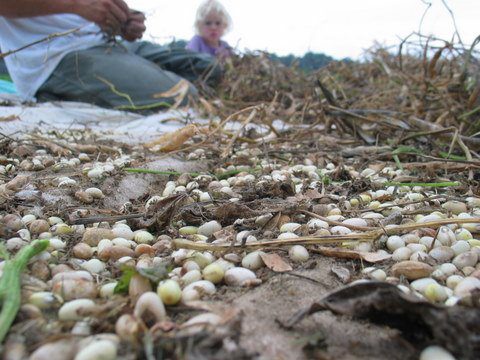 Our main crop of dried beans is our Nicaraguan red beans. When Dad and Mom came to visit us in our little adobe house that we built with our own hand in the northern hills of Nicaragua, Dad took home a bag of the beans and planted them in his garden. They’ve been growing the beans ever since, and now we have inherited seed from him and are planting our own crop. 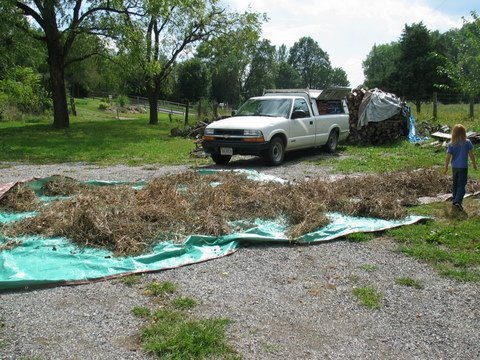 We don’t sit around and shell these red beans. Instead, Mr. Handsome does like a Nicaraguan and flails them. He sets a pile of them on this wire mesh and pounds them with a stick. 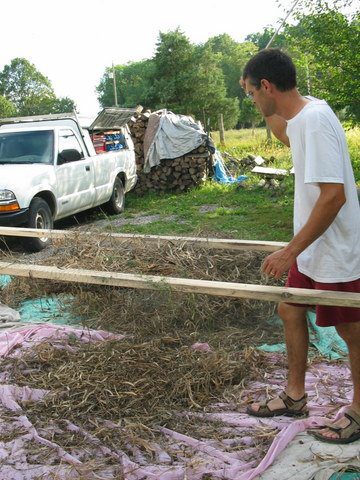 Then he tosses and turns them, 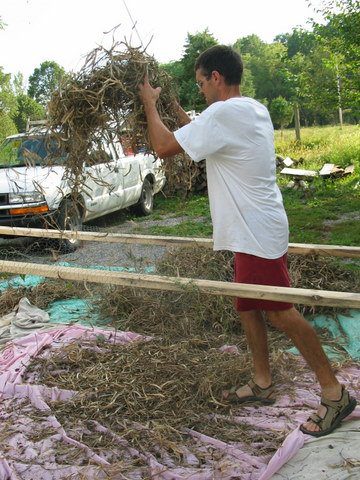 and pounds them some more. 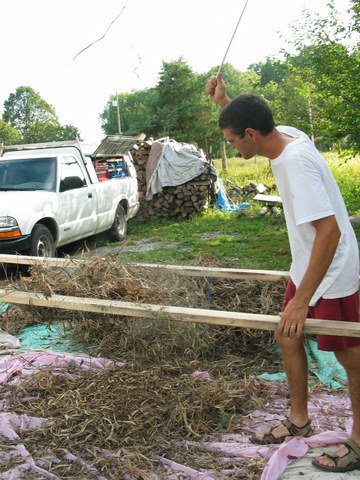 All (most) of the beans land on the tarp and he then discards the dried pods and pours the beans into a big tub. 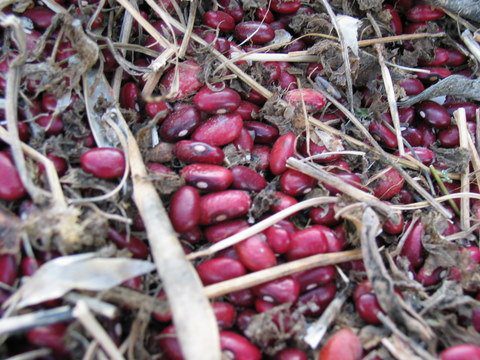 Then he winnows them (pours them in front of a running fan) to remove most of the chaff. We still need to pick through them even more, but I’ll do that later. This year we got close to forty pounds.

In case you’re interested, here are our fingerling potatoes. 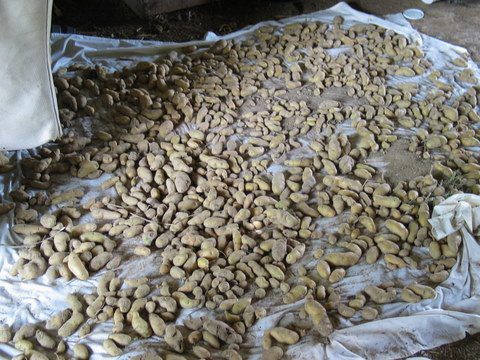 You can see some of the onions in the background. 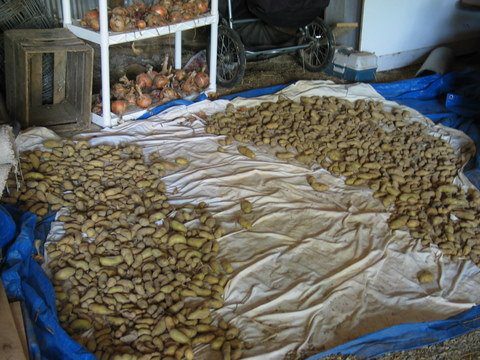 But back to the grapes. 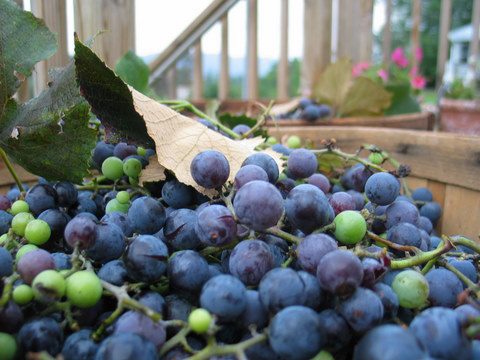 Normally, to make grape juice, we just plopped some grapes in a quart jar, added sugar, and then filled the jars up to the top with water and canned them. But this year the Grand Matriarch gave us a juicer as a joint birthday present, so we are playing around and experimenting with our new toy. 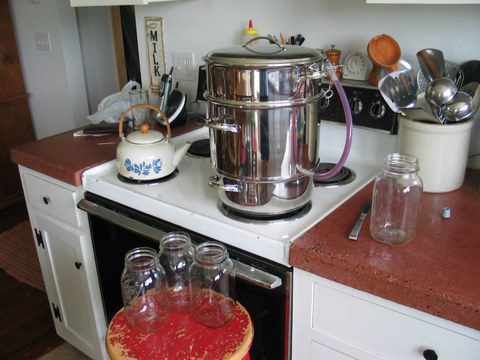 We are finding that it makes a very nice, rich grape juice concentrate of which we have so far turned out twenty quarts. We have hardly made a dent in the grape population, so I’ll be doing a lot more, plus maybe some grape jelly. 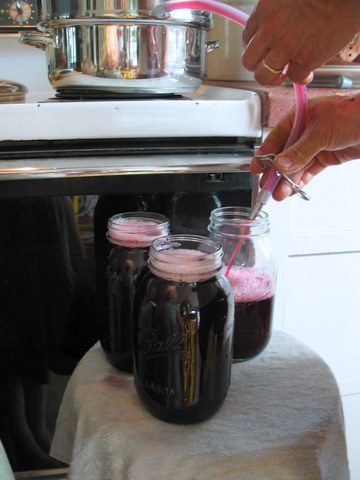 Here is Miss Becca Boo, walking on our porch railing and simultaneously eating grapes. My kids are extraordinarily talented. 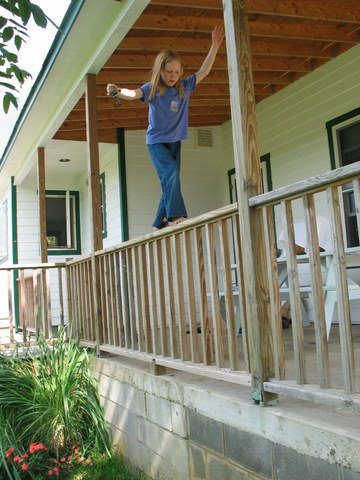 First thing this morning, I heard the chickens cackling up a storm. Upon investigating, I realized there was a rabbit stuck in their fence, thrashing about wildly. (It’s an electric fence, but it wasn’t turned on, which was fortunate for Peter C.) What is it with rabbits and fences on our property? I saved the rabbit for Mr. Handsome and when he finally came downstairs I informed him that there was an execution job awaiting him (remember, I’m a gardener, kind of, and all gardeners have the secret middle name of McGregor). But what do you think he did? He went out there and freed the little bugger! 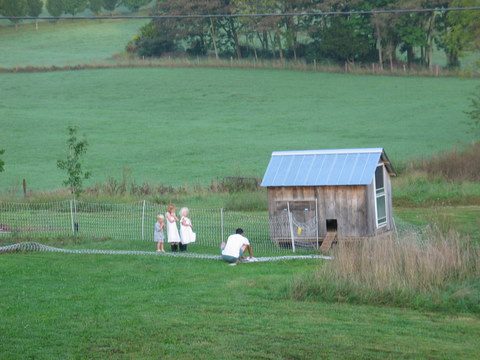 Whew. I’m feeling a little depleted and worn out, now that I’ve spewed. I think I need to go lay down.