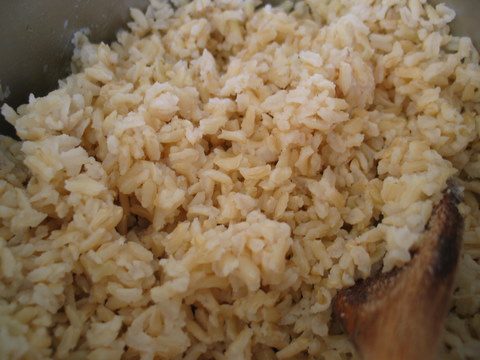 I go through phases with foods, especially with the starches. For a while our meals will be bread based, and then I’ll move on to potatoes. Pasta and rice take their turns. Once I start thinking in terms of one starch, then it’s all I can think of. I get in a rut. Pasta this and pasta that. Eventually we tire of the repeats and variations on a theme, and I shift, with great mental groaning and moaning, my focus to something else, say rice.

We’ve been eating a lot of rice. I made a big batch of Indian chicken and brown rice for dinner the other week and then we had tons of leftovers. We finished off the brown rice before the chicken, so I made a pot of white basmati rice to accompany the leftovers.

Brown Rice
From my Girlfriend Kris

In a heavy-bottomed saucepan bring the water to a rolling boil. Add the salt and olive oil, then pour in the rice. Give it a good stir. Bring the water up to a boil again (with the lid off), stir again, and then turn the heat down to low and put the lid back on the kettle. (If you have an electric stove, scoot the kettle half off the burner for the first several minutes to let the burner cool down a bit.)

Let the rice cook, untouched, for 45 minutes. Then, turn the heat off, but leave the kettle on the burner, untouched, for another 10 minutes. Take the lid off to see if all the liquid has been absorbed. If so, it is done and you can fluff and serve. If not, turn the burner back on to low heat and cook the rice until it’s done, checking every five minutes or so.

I like to make supper’s rice during the middle of the afternoon. That way I don’t have to feel rushed come suppertime. Also, I think it tastes better when it’s had some time to set for awhile. 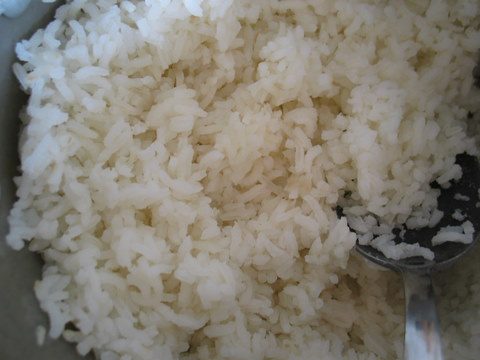 Put all the ingredients in a heavy-bottomed saucepan and stir well. With the lid off, bring the mixture to a rolling boil. Stir it well, and then turn the heat down to a low simmer and put the lid back on the kettle. Take precautions so the rice doesn’t boil over (see the recipe for brown rice for further details in regards to this part). Let the rice cook, untouched, for 20 minutes.

Now, on to the chicken part of our rice fest.

This last time that I made this Indian chicken dish, I used three pounds of skinless, bloneless chicken breasts. Yes, they were non-organic (gasp). I am not a perfectionist, and to be blunt, some of the time I just don’t really care. (GASP!)

(Hey! That big collective gasp just sucked all the air out of the room. I can’t breathe. Exhale, please!)

Sometimes I do care. Really. I do have a bit of a conscience. I can be politically correct. (Last year’s Thanksgiving turkey was organic and very, very expensive. Just ask Mr. Handsome. He had a cow about it. A figurative one, of course. If it hadn’t been a figurative one, we could’ve butchered it and eaten the cow instead of the very very expensive organic turkey.) But you know, you can only worry about so much. And boneless, skinless chicken breast is really easy and quick and yummy, and sometimes that’s all I have energy to care about.

So anyway, I chopped up the non-organic chicken, cooked them in a little bit of oil, and then added the chicken to the sauce and baked it for about an hour. This isn’t how I normally make this dish (now will you please stop waggling your fingers at me?), so in the following recipe I’ll explain how to make your Indian chicken, the PC way. (If you want to follow my non-organic example, feel free. I won’t gasp.) 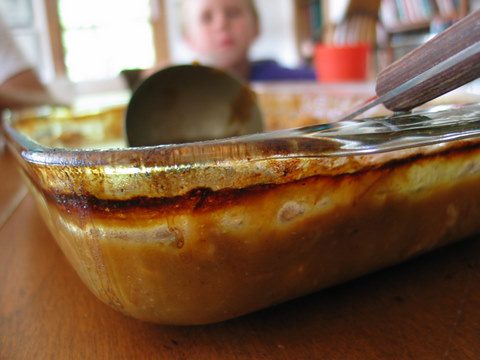 This is one of my standby company dinners: simple, spicy (but not so much so that it’s offensive to a child’s palate), unusual, and delicious.

Boil the chicken in a pot of water until the chicken is falling off the bone. Remove the chicken from the pot and leave it alone until it’s cool enough to handle. Pick all the bits of chicken off the bones, chopping up the bigger pieces. Put the bits and pieces of meat into a bowl and set aside. Do not throw out the chicken bones and fat—put them all back in the soup pot and make a chicken broth.

(For my chicken broth, I cover the bones and fat with water, filling the kettle up to the very top. I add a chopped onion, carrot, and stalk of celery, bay leaves, peppercorns, and salt. I simmer the whole mess for 8-12 hours, strain the mixture and put the broth in jars, filling them only three-quarters full, and stick them in the freezer.)

In another soup pot, one with a thick bottom, saute the onions in the oil or butter. When they are tender, add the flour, curry powder, ginger, and salt. Stir well, and then add the honey, soy sauce, and chicken broth. Bring the sauce up to a simmer, stirring well, until it has thickened. Add the chicken pieces and heat through. Serve over brown or white rice. 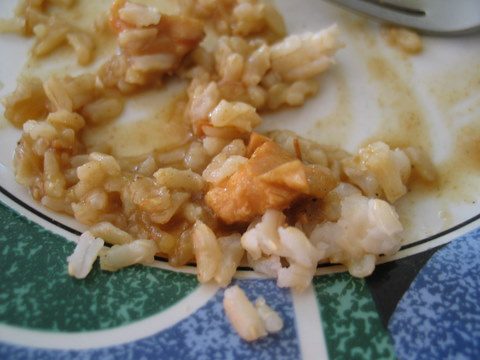