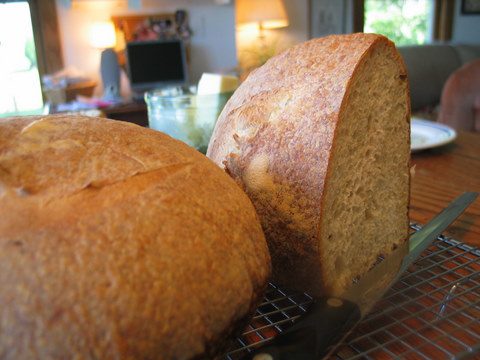 I made bread with the bread baby! It worked! Yippee, yee-haw, and whoo-hoo!

The kids and I tore into one of the loaves while it was still hot from the oven. We spread the warm, crusty pieces with lots of butter and tore off huge mouthfuls. 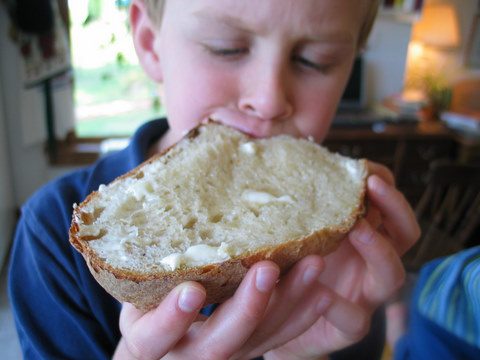 Since it was getting close to noon, I just cut up apples and sliced off some chunks of cheese and called it lunch. Supper was sandwiches. I toasted thick slices of the bread and spread one slice with pesto and one slice with mayonnaise and then put oven-roasted tomatoes and slices of Provolone cheese in between the two.

Like I said, we’re going to be eating a lot of bread from now on.

Country White
Adapted from Breads from the La Brea Bakery by Nancy Silverton, and briefly summarized.

I do not normally measure my ingredients in pounds and ounces, but I discovered how easy it is to put my Kitchen Aid mixing bowl on the scale, zero it, add the starter, zero it, and so forth. There’s hardly any mess, and it’s very exact.

Note the nice hole structure—it looks just like the holes in the bubbly starter. Nifty, huh? 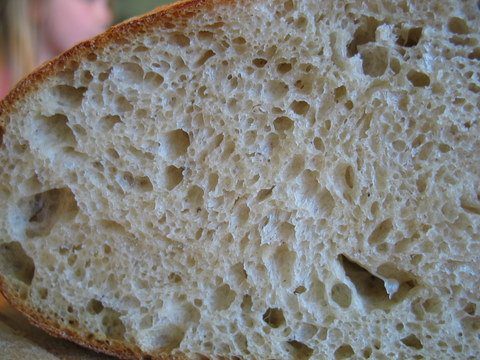 Day One
In the morning I mixed up my ingredients (the process includes kneading it in the mixer for 5 minutes, letting it rest for 20, and then adding the salt and kneading it for another 5 minutes, and so on—little details that I don’t want to bore you with). 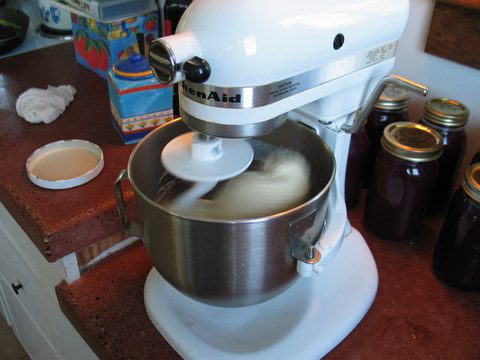 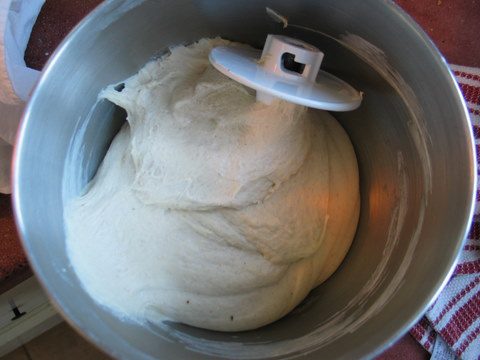 I put the dough in a lightly greased plastic bowl and let it rise for several hours. Then I dumped it out on a lightly floured counter and cut it into two pieces. 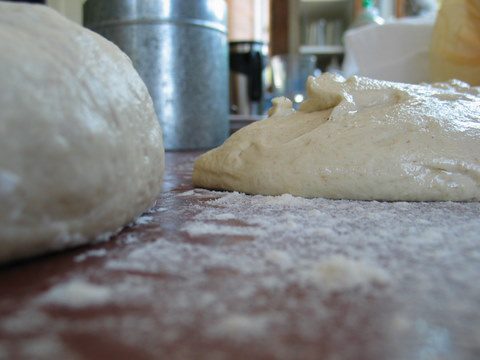 I lightly kneaded it to get all the air bubbles out, 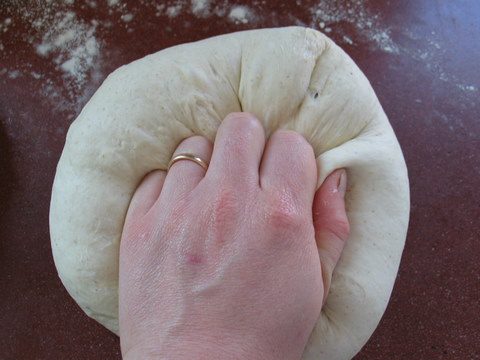 and there were a lot—do you see them? 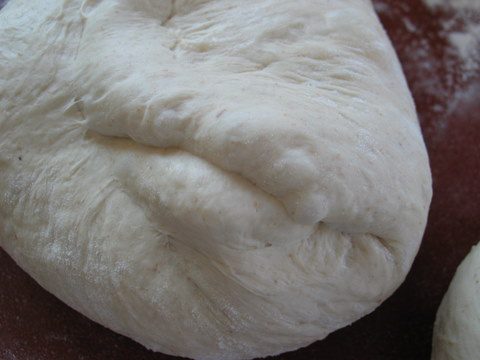 I left it to rest on the counter for 20 minutes. Then I shaped the dough into two boules. 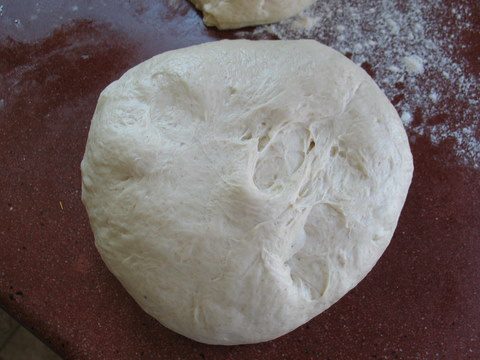 I lined two glass bowls with cheese cloths (you’re supposed to use bread baskets, but I don’t have any), sprinkled some flour over the cloths and set the boules in, smooth side down. 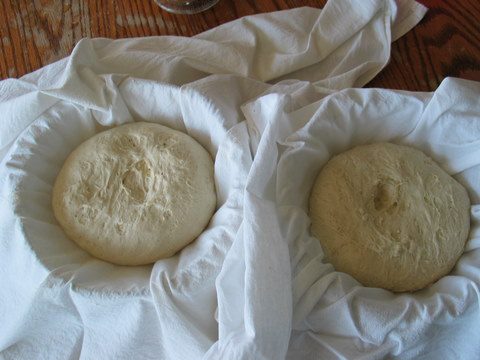 I covered them with a shower cap/plastic wrap and let them proof on the counter for one hour before slipping them into the fridge. 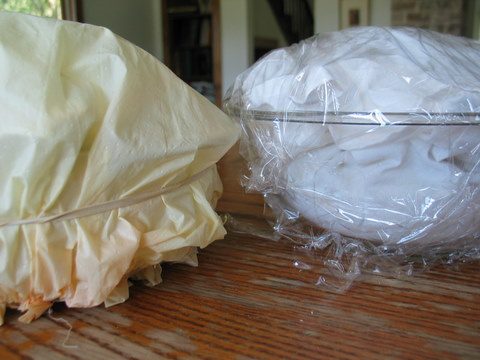 Day Two
I took the dough out of the fridge first thing in the morning (actually, Mr. Handsome did that for me because The Baby Nickel woke up at some obscene hour, like 4:30, and so as Mr. Handsome left the room to go fetch the non-sleeping twit, I croaked to him to please take the bread out of the fridge, which he kindly did) and took off the shower cap/plastic wrap, 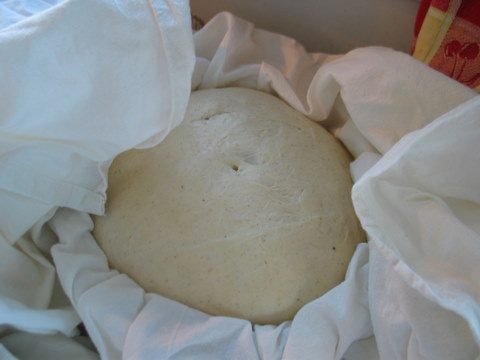 and let them sit on the counter till they were about 62 degrees. 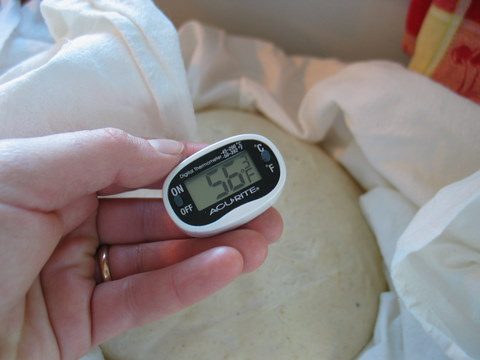 I put my big pizza stone on the bottom rack of the oven and preheated the oven to 450 degrees. I gently turned one of the loaves out on to my floured cutting board, 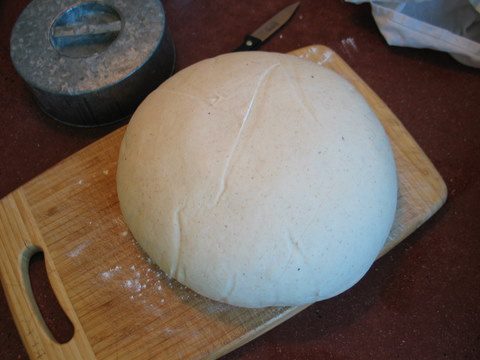 docked the top with a knife (it’s a backwards C cut for the Country White) (a razor blade works way better than a knife, but this being the first time baking sourdough in a year or two I wasn’t fully prepared), and slipped the loaf off the board and onto the hot pizza stone in the oven. (There are no pictures of that process because I had to work quickly.)

I spritzed the oven thoroughly with water right before putting the loaf in the oven, right after I put it in, 2 ½ minutes later, and again 2 ½ minutes later. Then I set the timer for 20 minutes and did not open the oven during that time. When the timer went off, I rotated the loaf 180 degrees and continued baking it for another 10 minutes. Then it was done and I baked the next loaf the same way. 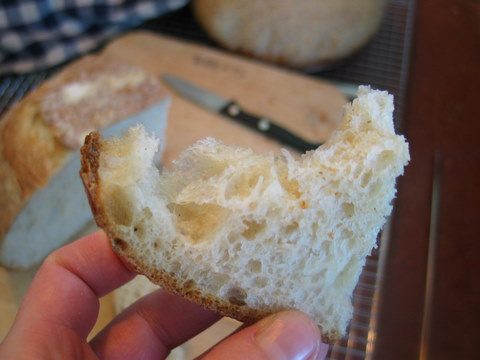