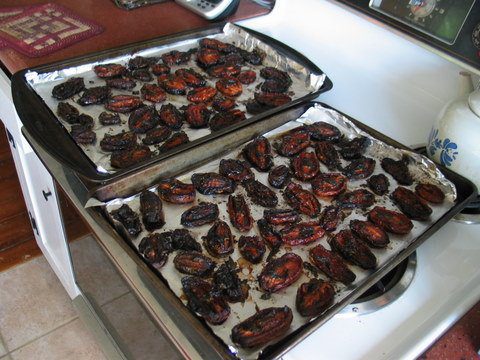 You know those roasted tomatoes I mentioned yesterday? Well, I charred them.

Made me so mad. I thought maybe it was a sign that I wasn’t quite well yet and ought to return to my bedroom chambers for another 24 hours or so.

But then I decided to make hamburgers for supper, and the world looked like a better, brighter place, once my belly was stuffed with a fat, juicy burger.

(I didn’t tell you, but in that photo of me lying on the sofa when I was sick, I had just woken up from a dream in which I was assembling a giant, as in plate-sized, hamburger—bun [it was flat like pita, but that didn’t matter in the dream], hamburger patty, lettuce, onion, mayonnaise—I even got to eat a couple bites of it before I woke up, and ever since then I had been obsessing about hamburgers.) It was a delightful meal, let me tell you. There are two and a half patties left over and no one in my house better touch them—they are mine.)

My house swarmed with children this morning. Actually, the house was child-free most of the time (I do have my limits). 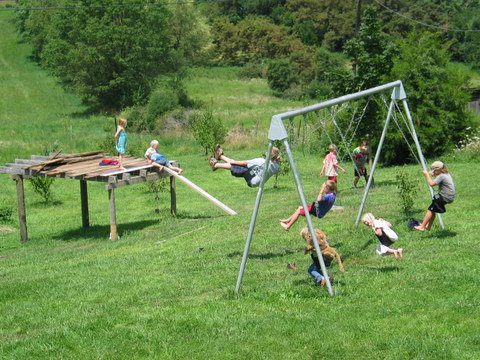 (Go ahead and count them—there should be eleven.)

My Girlfriend Shannon came with her three kids and her Girlfriend Karen (and her four boys) who is visiting from out-of-state. I told (warned) my kids that there would be six boys visiting and one girl, and when they arrived, Miss Becca Boo ran and hid in the back hall behind a bag of wheat. I didn’t blame her at all.

Yesterday when Shannon called to make plans for their visit, she informed me what we were going to make for lunch. I had no option but to obey her, especially since her idea was a good one. I took the gallon of milk they brought along and turned it into fresh mozzarella cheese, which we then ate with the fantastic tomato dressing/salad that Shannon makes every fall (juicy tomatoes, garlic, balsamic vinegar, basil…), sopped up with brown bread hot from the oven. We made the kids meat and cheese sandwiches for their lunch, but us girlfriends scarfed down our gourmet fare while perched on stools around the kitchen table, all the while alternating between moaning in delight and yelling at the kids to sit still, go outside, don’t push each other, don’t throw bread (cantaloupe, carrots…). It was a spectacular meal.

Now, I need to finish this post up because in a little while I’m leaving to go to the big city where I’ll meet up with Shannon and Karen at the theater where we’re going to see Mama Mia (I think that’s what it’s called, anyway). Woo-hoo! I’m goin’ out with my girlfriends!

Tomato dressing, fresh mozzarella, eleven kids, and a movie, all in one day. It’s almost more than I can handle!