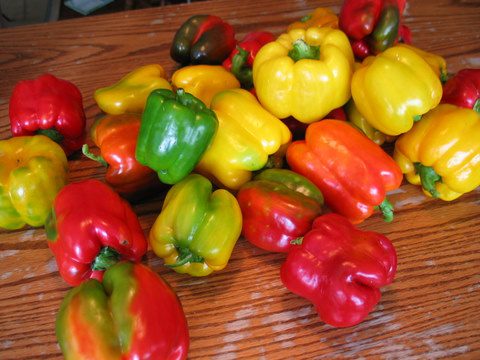 Out on yesterday’s pre-dawn run-slash-walk I passed a house that has two enormous pear trees out front. I’ve been watching these trees for several years now. I’ve toyed with the idea of knocking on the people’s door and seeing if they wanted their pears, but the trees seem cared for and last year they even had ladders out there and were filling buckets with pears, so I decided that I didn’t have a chance. But this morning as I came puffing down the road, I saw an older man walk out to the end of the driveway to check his mailbox. So I stopped and politely inquired (that means I said “sir”) if those pear trees were his. They were, he said. Do you use them? No. Could we have them? Yes. I explained where I lived (I didn’t want him to go and give the pears to someone else because I was just a nobody to him), and we talked about how and when to pick them and I ran away, nay, bounded away, for I was filled with that tickle-ly gleeful feeling.

After my morning café con leche, I made a 30 mile round trip to pick up more produce. At the first farm I bought two bushels of Rambo apples and a bushel of nectarines. I’ve never done nectarines before, but I decided since it was a good year for fruit and the farm had them, I might as well make hay (or rather, jams, dried fruit, canned fruit, and sauces) when the sun shines.

Then I drove a few more miles to a neighboring farm where two bushels of Romas were waiting for me. A young man came out and loaded them into the car for me. I noticed that they had been sorting peppers, they were all over the place, so I asked if they ever sell seconds of the peppers. He said, “Oh, you can just have those.” I gaped at him, “Are you serious?” He gave me a box and I filled it with giant, only very slightly blemished (what are knives for anyway?) yellow, orange, red, and green peppers. He offered to get me another box, but I declined, all the while feeling guilty for turning him down since I could see the sun was shining and I knew I should be making hay.

But I can only make so much hay.

I don’t even know what to do with all these peppers. Freeze them? I still have peppers in the freezer from last winter. If I had a grill I’d roast them. Just saute a big ol’ pile and wolf them down?

The moral of my tale is this:

2. Don’t drink coffee before going to pick up produce. The general feeling of well-being that comes from drinking coffee eventually wears off and then you suddenly realize that there is a lot of work to do. It’s rather dismaying. And sobering. The only remedy is to go drink another cup of coffee and blog about it.